Odd and Novelty Knives of the Great Outdoors!

I'm sure I have more than my fair share oddities and novelty knives that were made for the outdoor enthusiasts.  I think the chief target is the  the Angler!  Show 'em if you got 'em.  I'll start off with this The Imperial Fish-Master!

Now I debated novelty knife section but I decided to instead create this discussion.  I opted for here but as you can see, the Fish Master is a novelty knife!  I think I’ve seen these coming out of Japan but this one was made in the USA and the blade is etched “Imperial Veri-Sharp”   Not sure of when it was made but I'm thinking between 1960 and 1990.

The knife is completely stainless steel and quite heavy.   The magnet test shows that the blade is probably a 400 series Stainless, most likely a 420.  The rest of the knife is barely magnetic so I’m assuming the fish scaling head and the grip of the knife are made from cast 316 Stainless Steel considering its response to the magnet test but I’m not a metallurgist so it could be something else.

One of the  interesting items is the ruler along the bottom and the fish shape of the knife/scaler.  The two  parts (the knife grip and the scaling scabbard )  are held together by two small metal springs on either side of the Imperial “very-sharp” blade.  The blade is serrated and only three inches long.  It would’ve nice to have a longer blade.  The scaler looks massive and effective, however I haven’t tried it and as I normally fillet fish I really have no use for a fish scaler.   Still the knife is quite heavy and it seems that the scaling end would be a useful fish-head “knocker” if you were inclined to use it as such.

Obvioulsy there are more useful fish multi-tools and knives out there but this one has an interesting allure to it.  So many of these novelty type knives were made in Japan or or somewhere else overseas but this one was proudly made in the USA.   I assume this knife, like so many other fishing oddities were made for the fisherman who has everything.  I picture them being right up there with the Christmas Fish Tie, that is an item that was bought for avid fishermen and not by avid fishermen!    Of course me being a knife collector, fisherman, and a person who loves oddball stuff, it was right up my alley and I just had to buy it!  It’ll be displayed among the fish knives but will probably never see the inside of a tackle box! 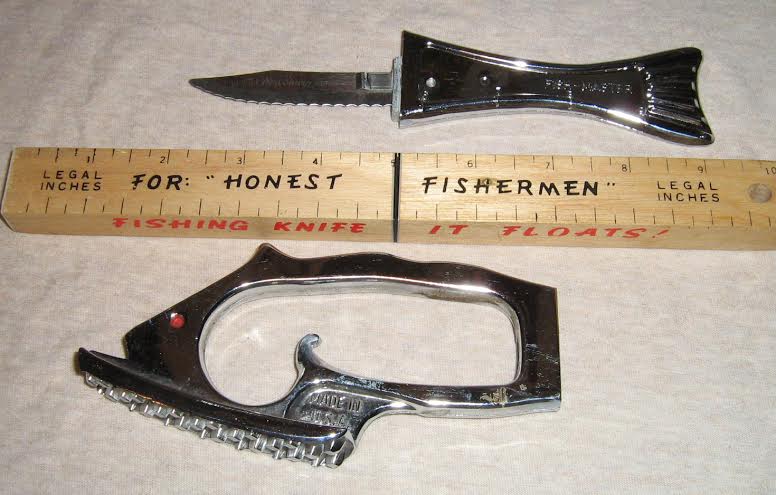 If nothing else the scaler could used to mash potatoes or a less than adequate set of brass knuckles!

I joined several month ago but just haven't had the time to take part in the discussions. Knives of the Great Outdoors got my attention.

I really like your Imperial Fish Master. When you mentioned that it could be used in place of brass knuckles, you may be onto something. Perhaps it was designed with use as a weapon in mind too? It might be legal to carry where a knife with a longer blade than 3 inches, plus a set of brass knuckles, would be illegal.

I wouldn't try to get it through airport security......hehehe.

I've got a few Hackman Finland knives and will try to post pictures. Boy Scout and Girl Scout knives too.

I haven't bought a knife in well over a month I think.  That is some kind of record!  Nothing has been catching my fancy until the other day. I came a cross a knife on my Bucket List!  It had it all!  Sure at first glance it looks like any other fish knife but on closer inspection uoi'll note it has a funny little doo-dad along the spine!  Yep you guessed it.  It is an Imperial fish Knife with their pat-pending beverage can opener!

Now I'm sure a lot of people out there have never had to open a beer or soda  can with punch style can opener but anyone who was in the wilderness or on fishing boat pre-1970 probably recall a moment when they were without a beer can opener!

This one is a fine example with good action and tight blades.   Even better is the exquisite fish shield! 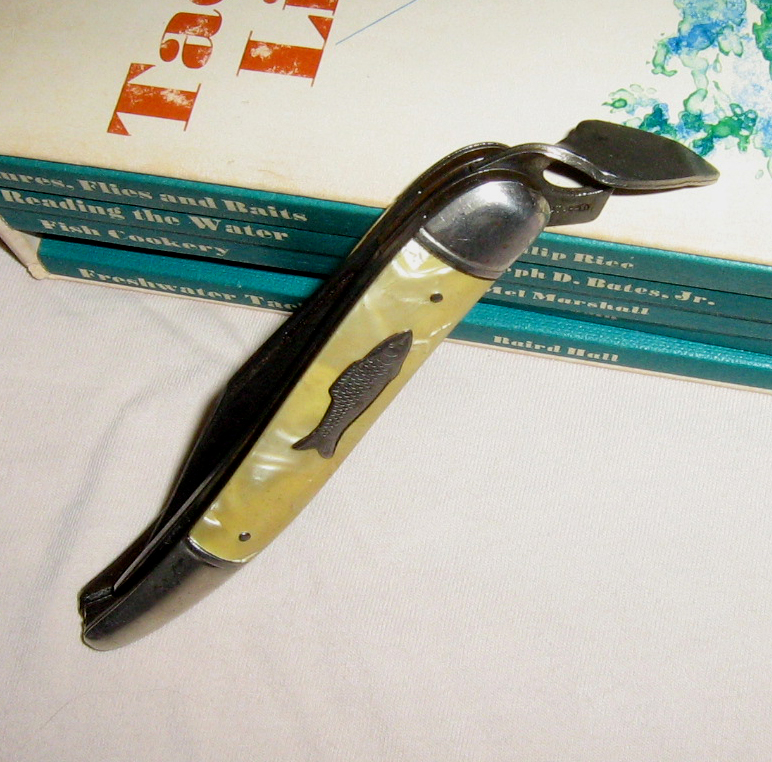 That is a great find!

Okay...they were talking dating Imperial Knives in another discussion group and an image of Imperial Tang stamps was posted: 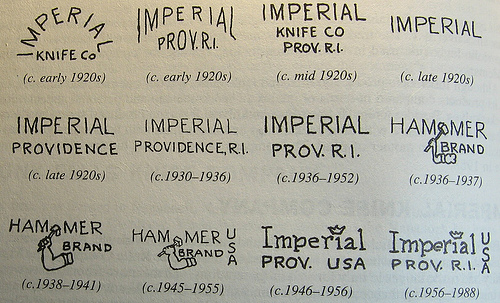 My Camera is too crappy to get a good pic of this knife's tang stamp but it matches the one for 1946-1956 so there you go.  The knife was made some time during the decade following WWII, so over 50 years ago!

Yes love those Imperial, the everyday man's knife in days gone by!

They held some patents for some really novel concepts.  They also get kudos for the modern safety can-opener even if it was kinda-sorta developed by a guy at Camillus.