I just purchased my first Schatt & Morgan. It was a limited run in smooth Blue Bone. The fit and finish is not what I had expected. The first one I received had a cracked shield which the distributor immediately made right, shipping me another plus a postage paid envelope for the return.

My complaints are that the handles are a poor match...the mark side is significantly lighter than the pile side, there are obvious gaps around the shield, the etching on the tang is double imaged and the etching on the blade is lighter in the middle than the ends. 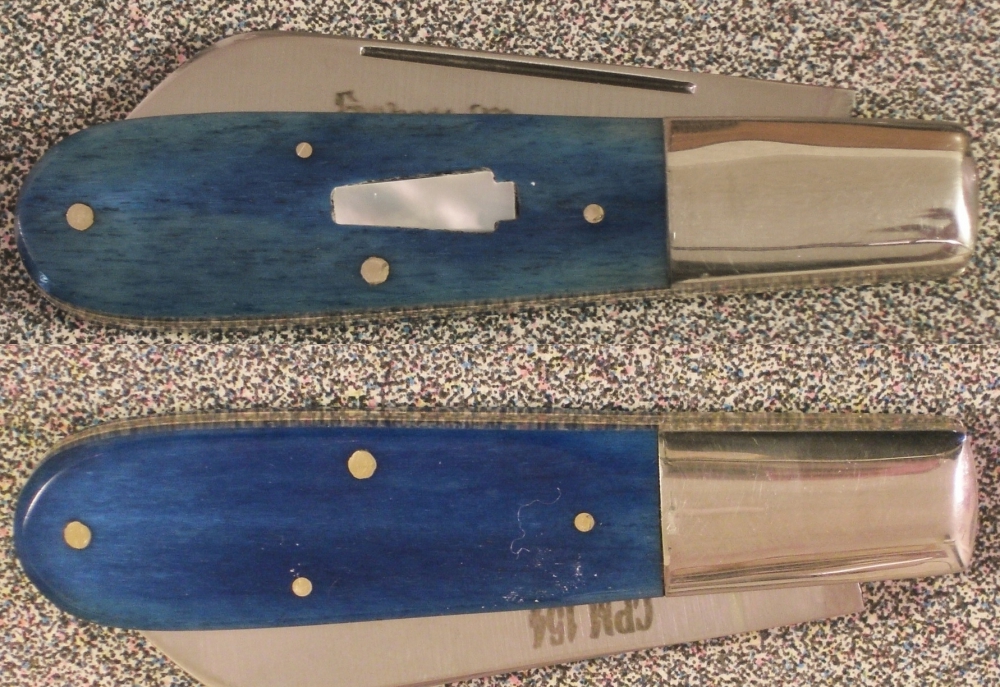 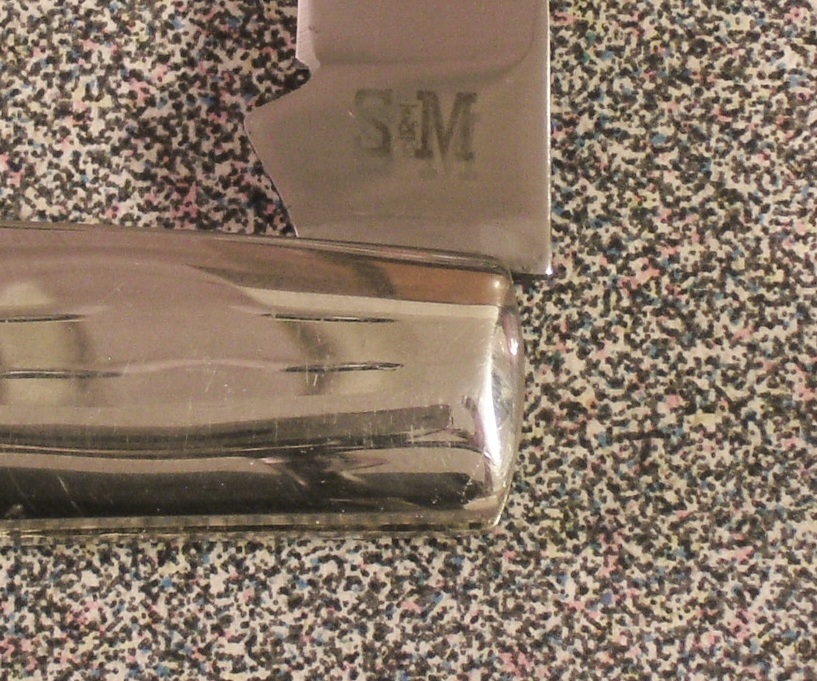 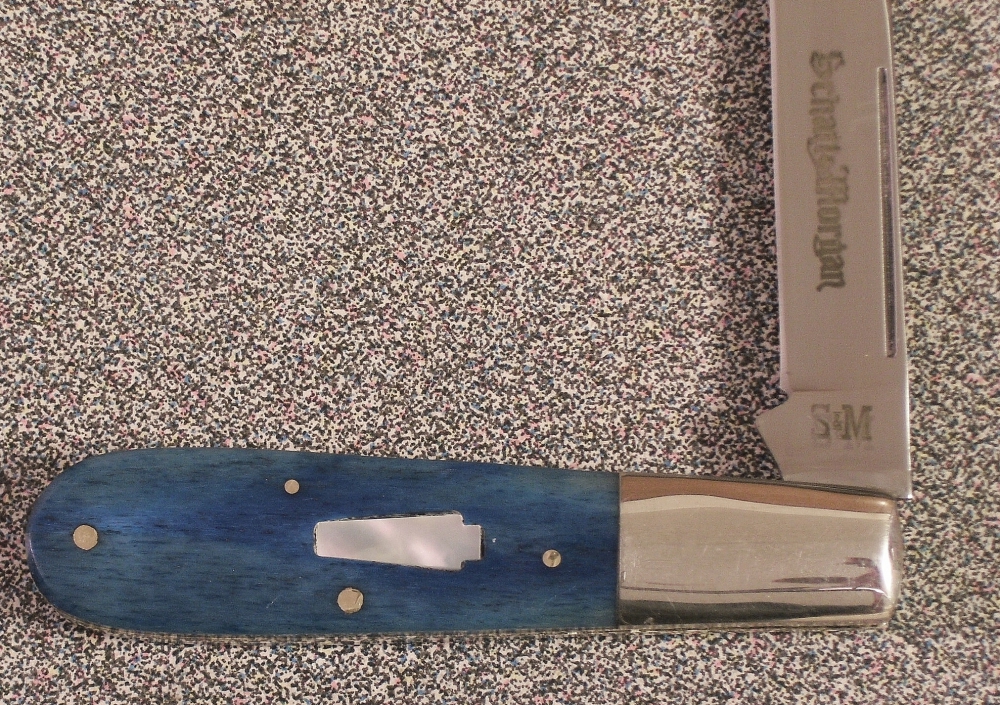 This story is getting more attention than was ever my intention. Greg, at TSA Knives, did send me the 2nd knife without waiting for the first to be returned, he did refund my money before the 2nd knife was returned, and he did send me a free knife in an effort to make things right. I did contact Queen concerning the problem as I know Greg can only sell what he is sent. It has not been my intension to bad mouth anyone. I have tried to present the facts as they occurred. In an effort of full disclosure, this is a message I left on the Schrade Collectors Comment Wall.

Compared to many knife collectors I'm relatively new to the game. I've been collecting Schrades for about 6 years. IKC has enlightened me to the fact that there are other knives than Schrade, good American made knives. What is very disappointing to me, is that I find better fit and finish in 30 year old Schrades than I am encountering in GEC and Queen. I recently paid nearly $100 for a newly manufactured knife that would have barely been qualified as a factory second by Schrades standards. My money was refunded, but this is the third knife I've returned due to quality issues out of eight purchases. Maybe I'm too old and too picky. When I was growing up, I was taught "if you have enough time to go back and fix something, you had enough time to do it right to start with". Perhaps this is a lesson that should be revisited.

Wow, Lot of commentary -- Over and over you learn one unhappy customer is more important than 10 satisfied customers (incidentally, this is a PRIME reason to go to knife shows).  I have now bought over 300 Queens, and had one ( a 3L file & Wire Select) that failed to please - Never bothered with the dealer - he did not make the warranty - got it directly to Queen and they fixed it fine very quickly  (and kept me in their customer base). My experience is clear- they make a fine knife and do honor the warranty.

Still, there are legitimate complaints. I do not know how to make a fine knife, but my suggestion to Queen about quality is based on statistical process control, where the standards are applied to each component or step before it goes to the next -- the loss in a less than desirable final knife is substantial and sort of tips the balance toward "let it go out.."

My experience has been much as yours.  Hundreds of Queens and I think I have returned 2.  Both straight to Queen and straight back to me with no issue.  As you say

I agree with Dan, there is no better way to buy a knife than to attend a show, and be able to examine and handle it before paying.  But I realize that is often not possible for everyone.

I too have been down this road before and was disappointed with what I was told. I received an 'American' made knife and found that the tang had been 'cut off' leaving a 'purple/blue' end that was just ground to shape and fitted into the handle with no regard as to aesthetics  let alone the blade temper. I contacted the company directly and after speaking with several people i finally reached a manager who thought I 'expected' too much..

Please tell me that was not a Queen

Ah, and more to say..Yesterday I received from Ka-Bar an 'Elephant Toe Nail 6250 for $75. delivered. It came in a nice box with a certificate of authenticity stating that it was number xxx of a series of 500 knives produced in March of 2011. Mirror polished blades and hardware, jigged and 'Indian Trail' molasses bone handles and a 'Union' 'bomb' shield. Their site lists this knife as 'second' quality hence the price. I have just gone over it with my glasses on and it looks perfect to me. Fit, finish, blades, bone are perfect. Like i say, It is still available on the Ka-Bar site.

Members and visitors of iKC,

I have certainly learned my lesson. Any newly manufactured knife that I have issues with will be returned to the company, not the dealer. I have several queen knives, the first one, a sway back jack, that I won here on iKC. That knife prompted me to buy the others. The quality, fit and finish is as good as I could ask for. That is the reason I was so surprised at the #69. I've since learned that the knife was actually a prototype. It wasn't advertised that way and I was expecting a collector quality knife.  I did appreciate Greg Holmes sending me one of his Trestle Pine knives. It was a very generous on his part, especially considering he had been refunded all my money. What I posted about that was a result of  irritation, that after two knives had been returned, the peace offering had a cracked handle as well. I agree that knife shows would be the ideal place to purchase a knife. The nearest large show is 280 miles away so I'll continue to rely on dealers and their descriptions.  I had read comments that the quality of some knife brands had decreased in recent years and that was what I originally intended to address, it got a little out of hand. I want to thank all the people that made comments, suggestions and offered opinions. I have been contacted by Ryan Daniels, Vice President of Sales for Queen Cutlery and any further discussion, on my part, will be with him.

i have a new queen single blade,it opens just fine with snap,but go to close it, it closes just the opposite no spring at all it is just loose, i guess i will send it back to queen. the store tells me they dont honor no knife warrenties.that is the last knife bought there by me and my family.i just dont understand why they (queen)lets this kinda stuff out the door.i know you get what you pay for,but simple stuff like this is just what changes my mind about buying the brand again.when  i was younger, people took pride in what they done.

I felt just the same as you do. Makes you wonder how much the person in quality control is making. Folks used to talk about not buying a car that was made on a Monday...weekend hangovers...or Friday...hurry up and get off work. Makes me wonder if the same is true with some knife manufacturers. I sent the Trestle Pine knife back to Queen to be re-handled on January 13. That was 11 weeks ago, and no word....must have a lot of returns if it takes that long to put handles on a knife.

We had a club knife (or several) made by Queen -- so many of them had back spring issues.  I remember one had even snapped in the box, before the purchaser even had a chance to open it -- it was found that way, laying in the box, broken like the spine of a little bird lying dad on the side of the interstate.  I really don't trust anything coming out of their factory because of that.  Similarly, I'm still gaining trust in Ontario after all of the brittle knives they put out there for years, poorly heat treated...  Especially at those prices, I'm just not drawn to even gamble on a Queen folder that I like the looks of.

Worse, I'm skeptical of any knife with any other name that looks like it could have come out of the Queen Factory (Schatt & Morgan, Great Eastern, can't think of others off the top of my head) because of the chance that Queen made it, & made it poorly.

Queen & similar brands could appeal to the many hipsters that buy on sites like Huckberry & read websites like The Art of Manliness -- all the "lumbersexuals" & other hipsters that seek out well-made items that look to be throw-backs to a by-gone era, & have the disposable income to make such purchases while in pursuit of the romance of days gone by.

But hipsters are also VERY savvy consumers, & "well-made" is a crucial component.  If they drop $100 to $150 on a knife -- something they may or may not know much about -- & receive a piece that's below stunning in ways they have yet to learn to appreciate, their dissatisfaction could be anywhere from mild (it's okay but I'll never buy from that company again) to severe (I'm going to rip them to shreds on every hipster site I can, to make sure no other hipsters ever make the same mistake I did).

Sorry for the rant here, I've been sitting on this information for a while now.  And I have seen some really nice looking knives -- Queen knives & "possibly produced by Queen" knives -- & it's aggravating because of Queen's issues, I don't trust an entire subset of knives, though I'm sure my wife & my bank account are at least happier for this.

When I bought the #69, it was one of 3 or 4 knives in my collection that weren't Schrades. Since then, I have bought a few Schatt & Morgans and a few Queens....most of them were made prior to 2000, and I haven't had any issues with them. One was a new issue this year and I sent it back because of the poor fit and finish. I have also bought several GEC knives, most of them new issue, and I have yet to find a flaw in any of them. I haven't stopped buying Schrade knives, the ones I want to add to my collection just aren't very plentiful. I have added a few more Schrades customized by Herman Williams and will continue to do so for as long as he makes them. Rarely have I opened a package containing a knife and found something that exceeds my expectations....I should say , a package containing a knife other than one of Herman's. When a knife is put together, any excess of material is ground or buffed away...liners, scales, springs, etc. When Herman works on a knife, if he doesn't align everything exactly as it came apart, he would be left with a knife of poor fit and finish...there is no extra material to trim away. He doesn't have a milling machine, a lathe, pins are set by feel and peened over with a hammer. Yet his knives continue to exceed my expectations. It was my lucky day when I bought my first Herman Williams Schrade, and it will be a sad day when I buy my last. By the way, what is a hipster...a hippy's  little sister?

This 152 Sharpfinger was done by Herman a day or two following his 79th birthday this year. Some folk still take pride in their work. 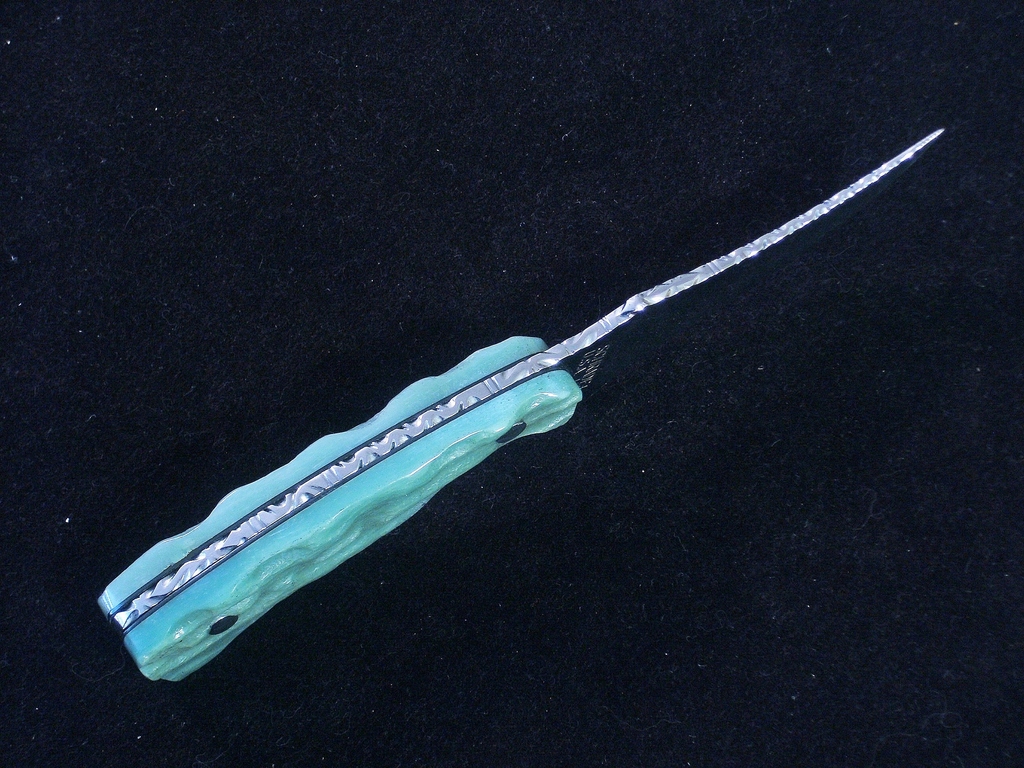