This liner-lock pocket knife has been produced by Queen Cutlery since 2004 and now has completed its 10th year in the catalog. The single blade knife is made on the traditional Copperhead pattern, with a swell at the top bolster providing some hand protection and a firm grip. The tail bolster is curved for a comfortable grip and ease of pocket carry. The knife is 3.75”closed and just over 6.5”open. Reflecting its hunting roots, the relatively massive clip blade has considerable belly, a sharp point, and a substantial half-stop. Almost all the catalog versions use D2 tool steel and are polished to a satin or brighter finish.

While liner-lock knives might not be mechanically as sophisticated as other lock blade styles, they can be quite functional. The Mini-Hunter lock is made of steel, not brass as in many other models. It is long with small grip serrations along its length and physically captures the open blade; an elegant, comfortable, and secure version of this style lock.

Queen has cataloged the knife in eight different treatments, all included in this summary. There may be other knife patterns Queen has plunged into as strongly as the 41L, but I am not aware of them. In its first catalog, 2004-2005, the knife is shown with six different treatments. While all are catalog offerings, for this review they are divided into two subgroups, regular production knives and gentleman's knives, based on handle materials, blade etches, and shields.

Regular Production Knives. Five Queen #41L knives have been produced as parts of other knife series using the same handles. blade etches and shields as other models. These include, starting from the most humble:

In photo 1, the Cocobolo example is quite dark, almost like ebony, while others have been seen in a much lighter red/brown variable color. Clearly the ACSB is the longevity winner and the only model still in production. The Mini-Hunter was skipped in the recent Curly Zebra (CZ) wood handle series, suggesting only moderate demand for the model and helping consumers to more easily choose the bone-handled knife. Still, many would say the Amber Stag Bone is also the prettiest of these offerings. Of these five knives, the CSB has been by far the hardest to find.

Gentleman's Model #41L The other three versions of this knife are displayed in Photo 2. These three were offered in high quality traditional handle materials with no shields, and with special blade etches, including:

It does seem that the 420 steel in the Sheffield version permitted a somewhat higher polish, although even the difficult D2 steel received very high polish in these models compared to the other regular production models.

Production and sales records for this knife are not public, but it is very likely that only small editions of the Pearl and Abalone knives were produced by Queen for the two catalogs that included them (04-05, 06). Buyers seeking a locking medium size, capable pocket knife for hard use could choose from the less expensive delrin or wood handled versions (or a non-locking Copperhead #41). Being labeled “Hunter” and not “for Gentlemen,” being a bit larger than most gentleman's knives (2.5 – 3.5”), and having a locking blade, might have not gotten the attention of most gentlemanly buyers. Even though offered for three years, it is possible that there has only been one relatively small edition of each of these knives made by Queen and that those took a few years to sell out. My opinion is that probably less than 250 of each of these special knives have been produced. It may well have been less. Beginning the search in 2008, except for the current production ACSB, all versions of this knife have been hard to find. The Abalone, Pearl, and Sheffield jigged pearl are VERY hard to find for catalog knives produced in the 21st century and can be called “rare”. At least one Special Factory Order (SFO) version of the Pearl Mini-hunter has been produced, but no other SFOs of the Mini-hunter have been identified to date. (Queen has produced versions of the Oar carver knife using this frame and lock, but they have a distinct, small carving blade).

One desirable feature of these knives is that early buyers were aware of the quality and generally kept the fancy Model #41Ls in very good condition. When you find one it is likely to be very nice.

The Queen 41L Mini-Hunter may not have a large place in Queen Cutlery sales, but is both rare and desirable for collectors. It deserve a special place for its initial grand splash, and its inherent capabilities as a pocket knife. Maybe some day we will see new editions with torched stag and buffalo horn to support these eight knives. You might get lucky and find one of the used wood or Delrin versions at modest price – truly one of the great values in Queen knives. Of course I like them. Why collect any knife you do not like?

The Queen Historical Documents report on this model is the primary source for this article: http://www.queencutlery.com/uploads/Model_41__41L__7-7-2014.pdf. In addition, a copy of each page showing the #41L in all the various catalogs can be viewed on this site, following the links to “Advertising material.” 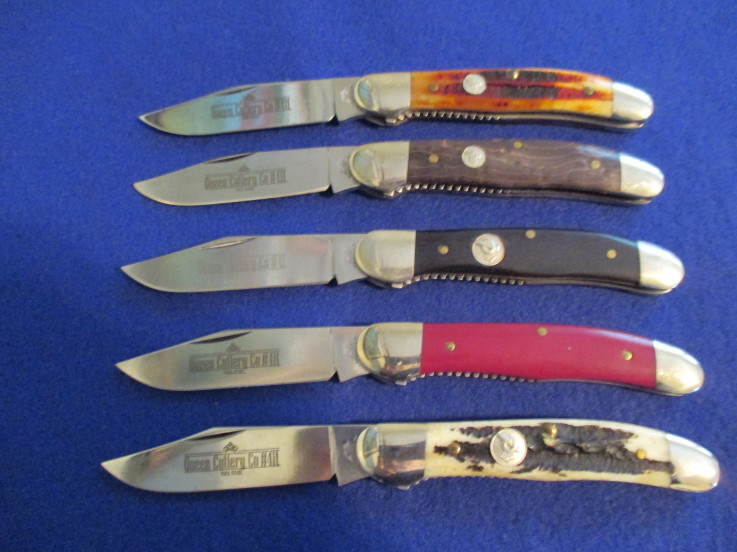 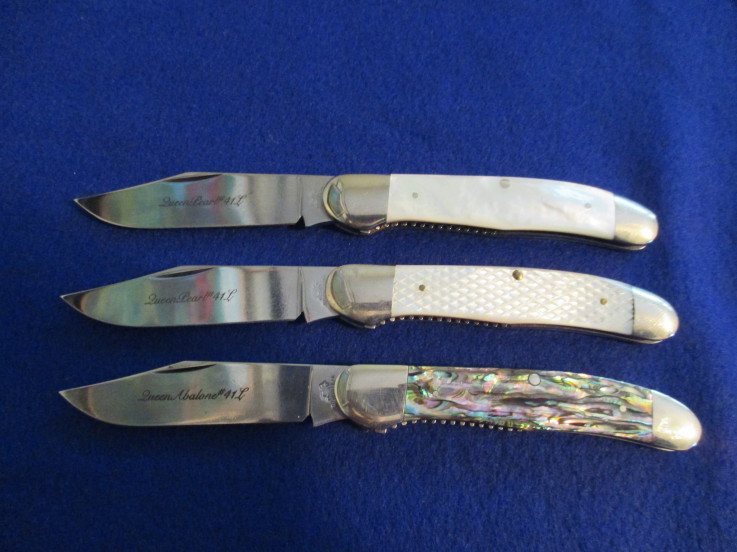 Guess I am not so good at adding photos - they don't appear.  I will work on that. Sorry, Dan

A great review Dan, thanks for that.

This link adds greatly to the set of 41L patterns .  There are many!  Five different handle treatments by 2 levels of sharpness.!  (For $2.50, I'd go with "extra sharp") The Crown Red  goes back to the middle '90s and I have never seen one of those in the "mini-hunter" blade.  Still for sale, these are a pretty rare little bunch.  I'll bet not many of any of these have been made.

Thank you for adding this information.

Keep in mind, Dan, that the extra sharp has been reground to a flat ground edge, for woodcarving.

If you're collecting them, I'd go with the factory edge.  Just my two cents...

You are probably right - factory edge may be preferable for Queen collectors -  but I am also a user, and these nice little knives have never been cataloged - I'll be careful and my grandchildren will probably still get something for it.

It is interesting that they have never been cataloged!

Like a ton of other Queen knives, SFO info is only for buyer and seller.  I am seeking some more info on these, but already I am thinking there is more to this than a few rare knives. Carvers are not necessarily collectors and these are in use.- not circulating much.

Got a few funny looks when I said I was going to use mine, Dan.  I'm in the process of sharpening it right now.  The sharpened ones don't have the grind that will hold up to the carving that I do, while its great for most everyone else.

I'd hope that my kids would treasure one that I've used, over one that's stayed in the box.

Y'all reckon that it hasn't been cataloged because it has the OarCarver name?

Like a ton of other Queen knives, SFO info is only for buyer and seller.  I am seeking some more info on these, but already I am thinking there is more to this than a few rare knives. Carvers are not necessarily collectors and these are in use.- not circulating much.

Which is probably thewhy they're seldom seen on the universal marketplace, eBay.