Hi fellow Schrade Collectors.  My question is, who has purchased any of the new Schrades made by Stewart Taylor, and were they worth buying ? Please tell me what model you bought and where it was bought if  possible. I have only collected the old Scrades so far, but I am interested in how the company does now .

Permalink Reply by J.J. Smith III on August 28, 2017 at 23:39
It's been a long time since I visited this post. Everyone knows I like my USA knives as well as they know my fondness for a Rough Rider.
My impressions on the new Schrades is that they're only similar to the old ones. Others have said that the colors were "off" and that they lacked fit and finish.
My problem is they just don't "feel" right.
Going to stop me from picking one up, if I'm in the market? Nope.

Lots of good comments here lately!  I still have not purchased  any of the Taylor schrades yet, main reason being the USA ones are so plentiful on Ebay. When they run out , I may start buying the taylor brands.

I agree with Ricky, Lots of good comments here. Maybe we should have a sub category for Taylor Schrades? Ricky.....those plentiful USA Schrades are getting more and more expensive all the time, We better stock up while we can! 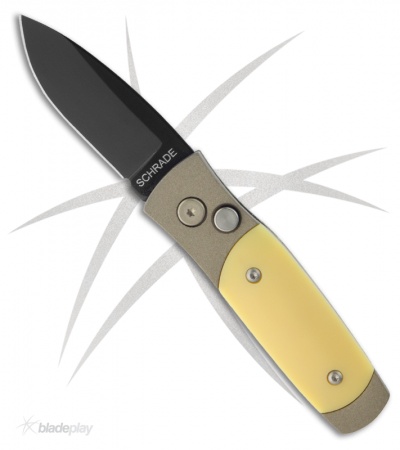 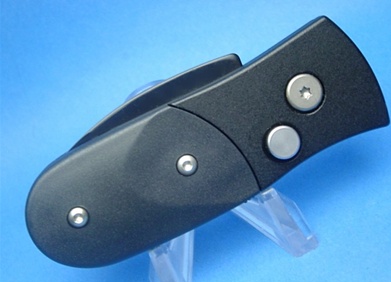 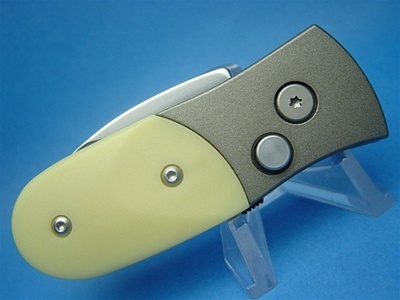 The california legal ones came with a lock that consisted of a small sliding piece of plastic that could be slid forward to form an interference fit or block in front of the button. I had a couple that simply didn't work straight out of the box & most of the rest failed rather quickly. i.e. they were plastic & could be easily overcome by simply applying heavy pressure to the release button. Once that was done .. they were worthless from that point on.

There were no locks present on the SMEDX units I had. I've seen where sliding locks were introduced on later models.

They used a 3/8 coil spring & operated fine from an auto standpoint .. the buttonlock mechanism locked both the open & closed positions securely. However .. the button was of the raised type @ in the absence of a lock .. were not the safest for pocket carry.

NOTE: The views expressed above are opinions ..specifically.. mine.

Yours may & should differ on some ..perhaps all.. points.

The one on the bottom looks kinda cute, Dale.  What's the size on it?

Would you recommend those knives Dale ?

JJ .. The smaller one IS cute !!  Further .. it is very lite & rides quite nicely in one's pocket. I'm pretty sure I sent Kaylin one of the SMEDx models ..for comparison.. I found the quality to be the same throughout both product lines.

The one on the bottom looks kinda cute, Dale.  What's the size on it?

Longer answer = I've given a # of them away ..as.. they are inexpensive (as auto's go) & can make great lil one handed opening EDC's ..given.. the shortcomings I've noted above. Just go into it knowing .. the temper of the blade steel is NOT what one would expect from 440C blade steel. The lock for the button is PLASTIC & has a short life. Note: the buttonlock itself is all steel & locks up solid. That being said .. I found the quality CONSISTENT ..&.. I went through about 10 of ea model, i.e. both the SMEDx & the SCALx. They're actually pretty robust knives for an auto. Zero blade play when tightened properly ..&.. the blades are robust. The overall construction resulted in a sturdy knife.

Note: I purchased them as simple buttonlocks & converted them to auto's with the simple addition of a 3/8 coil spring. As they arrived .. they had the cavity for the coil spring precast in the frame ..but.. there was a "washer" in place of the spring. I simply removed said washer & replaced with the easily sourced 3/8 coil spring used in many other autos. I sourced the springs from knifekitsdotcom ..but.. texas knife supply & others also hold them in stock.

Would you recommend those knives Dale ?

On the previous page you stated something to the affect that Schrade USA was importing knives towards the end. Schrade did make their Imperial knives in Ireland. As far as them importing knives from Japan and China....this is not 100% correct. They did import parts for knives from China, however, the knives themselves were assembled in the USA. Sounds like I am splitting hairs, however, I think this is why the fit and finish on these knives were very good, even though some of the parts were imported. I am not bashing Taylor but the Cina knives were made in China and their quality control is nothing like we have in the USA, although they have come a long way in the past couple of years.

I am a Schrade USA collector and will remain the same. I have purchased a couple of the off shore knives, for comparison to the USA made/assembled knives and there is a significant difference.

My two cents worth!

NOTE: one correction to my above stated opinions.

The SMEDx models that I sourced do have the same plastic lock that slides along the spine & can (sort of) be seen in the bottom most posted pic of the SCALY .. along the spine @ the junction of the scale & bolster. JJ's daughter has an affinity for assisted knives & in an effort directed toward fostering that interest .. I gifted her a SMEDB. I just checked the verbiage of the letter I included with that package & noted I'd cautioned her about the fragility of the sliding plastic lock.

A). the sliding lock was difficult to fully engage i.e. required a cogent effort to insure full engagement.

B). if not fully engaged .. depressing the release button would "shave off" a bit of the plastic sliding lock & over time would certainly render the plastic slide completely ineffective.

imo .. it is unfortunate the sliding lock was not made of metal. That would have greatly increased both its short & long term effectiveness .. imo

The frame consists of 2 solid cast aluminum pieces .. analogous to the construction of a BUCK 110 and/or 112 .. except the Buck is solid brass & these are solid aluminum. The knives are assembled using threaded fasteners through-out. The pivot pin can be tightened to the point where the blade cannot be opened ..or.. left so loose that the coil spring disengages from the blade. However .. when tightened properly .. the knife opens & closes flawlessly w/o any blade play. Note: once that position is attained .. I would suggest introducing some thread-locking compound.

I also stated that I sourced these as simple button-locks & converted them to auto's. Let me expand on that .........

Upon arrival .. the blade has the required hole to accept the "prong" of a standard 3/8" coil spring & the frame has the required cavity cast in place. The spring cavity cast in the frame is filled with a thick washer in place of the spring. The conversion is very straightforward. The following items are required: a Torx T8 for the pivot fastener .. a Torx T6 for the scale & frame fasteners .. a 3/8" coil spring ..&.. a bit of patience. I'm pretty sure this modification instantly voids the warranty.

Permalink Reply by Ugly Old Guy on September 2, 2017 at 14:36
Tom,
The only USA Schrades I have any experience with are an old clamshell Imperial "Prov R.I." Barlow, and the Old Timer 6OT and 7OT.
I also have a couple Taylor Schrade 7OT's. (I also had a Taylor LB7, but gifted it to my then boss)
I have not been able to compare the USA and Taylor 7OT's side-by-side yet. The USA knives are in Idaho (where I am now) and the Taylors are in Florida.
I flew to Idaho, no checked bags, so I could not bring any knifes with me.
At any rate, when I drove an over the road expedited truck for four years, I carried the Taylor 7OT almost 24/7/365.25. The only time it was not on me, was when I was taking a shower. (Yes, I slept in my clothes (most OTR truckers do) and it was on my belt when I was sleeping.)
Having carried it for so long, I do remember what they are like.
To be honest, other than the color of the Delrin, and the tang stamp (no "Schrade +" on the Taylor) I cannot think of any differences. The fit and finish is identical: centered blades, no gaps anywhere, no blade wobble in any direction, open or closed.
The USA and Taylor both hold an edge just as long as the other., and sharpen just as easily. (actually, even after heavy use, I rarely have to take either to a stone. Stropping or a couple swipes on the bottom of a coffee cup brings them both back to arm hair shaving sharpness)
When I get a chance to compare them side-to-side, I may see a difference. Perhaps the liners will be slightly thinner on one compared to the other. That is the case between my USA 6OT and 7OT. The liners on the 6OT are maybe 1/32 inch thinner than the liners on the 7OT. I don't know if that is "normal", but that is how it is on my two examples.

A question for you, since you collect the USA made Schrades. I have not been able to find anything online, other than the 7OT came out in 1978, which eliminates the 7OT as a possibility.
Starting in 1968 or 1969, while in Jr. High, I used some of my paper route money to buy a Schrade lockback. (I could not afford the Buck 110) I carried it on my belt through Jr. High and High School. I **know** I used it in the shop courses I took in Jr. High and High School. Since I graduated in 1974, this eliminates the 7OT, since it did not come out until 4 years after I graduated.
I remember the knife was the same size as the 110, and was the same basic shape, but the bolsters were more rounded. (a friend had a 110, I noticed that when I looked at his)
What model(s) of lockbacks did Schrade make in the time frame of 1967 to 1969 that were the same size as the Buck 110?
(I'll presume they got around the patent Buck had, by changing the spring and maybe a couple other minor design changes. I know the Buck 110 broke the spring somewhat regularly during the first few years, until Buck made some changes to it in the 2nd Series, or one of the 1st Series variations. Schrade never had that problem, that I know of, at any rate.)

Permalink Reply by Tom Chase on September 4, 2017 at 7:05
My immediate response would be the LB7
This knife has been around for years and I know I had one in Junior High as well. That would put it aproximately 1975. I need to get into my Schrade files and determine the first year that the LB7 was produced.

I will get back to you.

Kevin D left a comment for Derek
8 hours ago