Where do you find your vintage (antique) knives?

I know many of us techie collectors trade between each other and shop online but what other venues do you browse to find your vintage knives?
I get a lot of mine at gun/knife shows that I have tables at, hit estate sales when I can and head to antique malls with the small booths sometimes too. So how bout you?

Now that is unique buying technique!!!!  Let me know if you get that tattoo, I would love to see it even if it does not blink LOL

man...I love that Invicible.    And David, your story about keeping the tang on your desk is great.  I worked for the county for 30 yearss and I wish I did that.

Women collect a lot of things.  Some of them collect almost everything.  But few collect guns or knives, so when I meet a woman who is a 'collector' of antiques or collectibles I always bring up that I collect old knives.  And when I was still collecting guns I let them know that too because I found that many had knives (especially) and guns (sometimes) that belonged to Dad or Grandad (or mom!) and they had no use for them.  Bought a few that way.

When I could I used to hit antique stores and estate sales nearly every week.  Our flea markets have pretty much all died off.  I have gone to some pawn shops but never found too many that weren't hella expensive.

Now I go to our local Gun & Knife show 2x per year, stop at a yard sale if I see one, and mostly right now uy online.  If anyone has knives for sale I am always interested especially in switchblades because they are so dang hard to find.

I think I will taattoo "I Buy Knives" on my forehead!  Be cool if it blinked.

I've been meaning to tell people, recently I have bought a couple of knives (and spent a lot of time looking at knives) at AAPK.  All About Pocket Knives.  You guys probably already heard about it, but just in case one of you have missed it so far....check it out.  They have Member Storesand some of them are really chock full of different types of knives.

New knives.  Antique knives.  Mostly folders but some guys have ridgids for sale too.

Definitely worth a few minutes of browing.

They have articles, research & price guides etc.  Some of the same kind of stuff you can get here.

But it's always nice to have more knife places to look at and to shop at.

Seems its getting harder and harder. I also find them where you have said. I am getting interested in just "Knife Shows" though it seems I have to travel farther to find them.

I'm a swap meet, thrift store & yard sale denizen. Recently found a pre 1931 New York Knife Co, Hammer Brand Pen knife at the local swap, a 1960's-70's Hermes Schlumberger Corkscrew Knife at a local thrift store, and a Camillus Marlin Spike, actually used by a commercial fisherman in the '60's, found at a yard sale. I go to estate sales occasionally, but most of my "finds" come from swaps, thrifts, and yard sales. I live in a small town, surrounded by other relatively small towns, so there aren't that many other knife collectors around, and having a good eye for "collectibles", I get lucky once in awhile. Here is a single photo of each of those recent finds.....and the search goes on!! 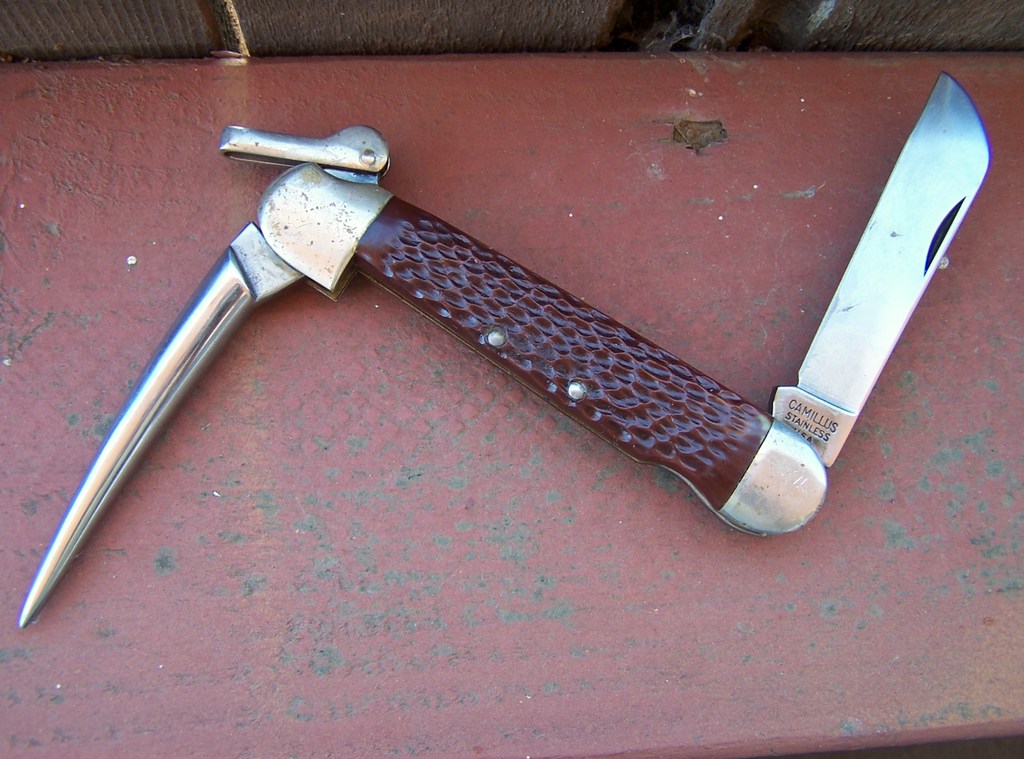 Another good day at the local swap!

First is a 1967-72 Buck 311 Trapper. Paid $20, but for a USA Buck of this vintage and condition not so bad, (at least I'm happy with that price, so that's all that matters really). Plus these old(er) Camillus-made Bucks are getting scarcer, this is the first one I've come across locally in....well.....like forever! I jumped at the chance, I figured I might never see another one locally. That particular table was a "gypsy" swapper, meaning they only came to town once a year or so on the way to somewhere else...glad he came today that's for sure! I've been looking for one of these, especially from that particular era, for quite some time to replace one stolen in a burglary years ago; today was THE day! Tight, sharp blades, smooth handles, and snaps shut like a quality US-made knife should. After a few minutes with my stone & strop the blades sharpened up nicely. It will go into a leather sheath and will go into my EDC rotation along with the 313 of the same era I carry regularly. There could have been a Yellow Comp Case Trapper in that photo, the guy also had one of those, but I was tapped by then, (I never go to the swap with more than $30 in my pocket....gotta keep that budget in check), so I made myself walk away, (though I was tempted to run to the ATM to get more money, I stifled myself...IT WAS HARD!). I had to choose between the Case and the Buck....the Buck won 'cause I wanted it more! There are more of those version Case's out there than this series of Buck I think, so hopefully I'll run across another one after recovering from today's splurge.

Second is a German "Whale" stamp pen knife I snagged for $2 at another table, (one of my "regulars"). White smooth bone, (I think it's bone?). I've seen the stamp before, but don't know much about it, perhaps one of you gurus can enlighten me?

Third is a slightly smaller Hammer Brand pen from that same guy, 2 bucks for that one too. Smooth white bone(?) also. Almost could not make out the tang stamp, but after putting it under a bright light & magnifying glass I could just barely make it out. I'll have to try to compare it to the photo of Hammer tang stamps to determine it's age, but still a good find for the money. 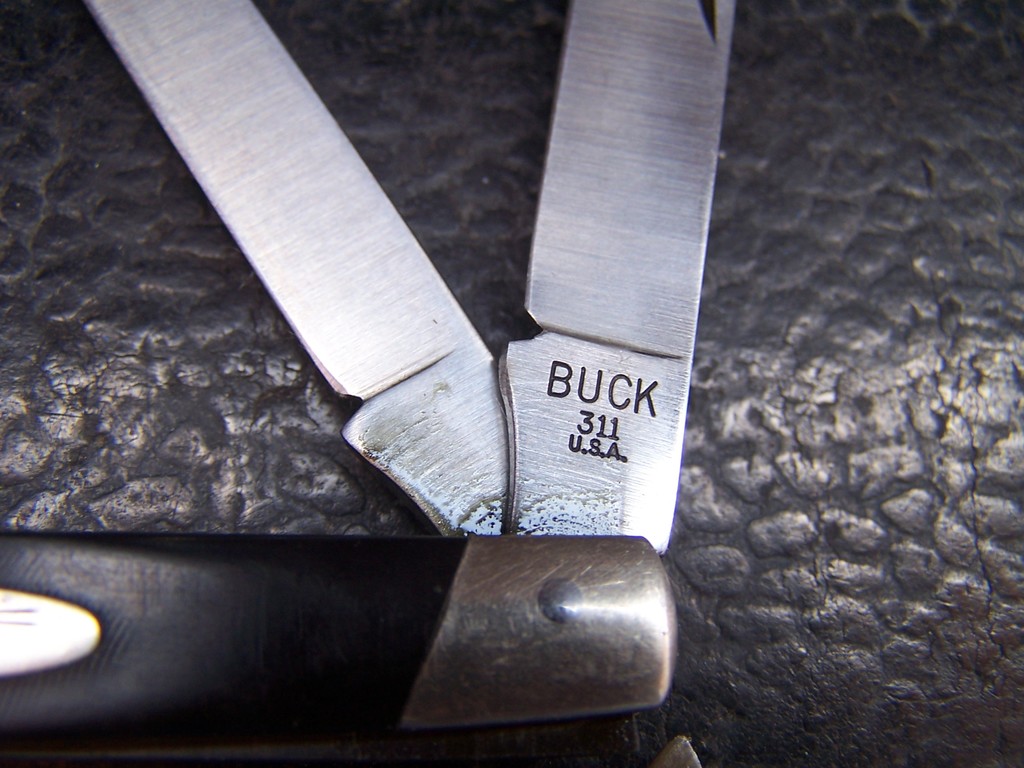 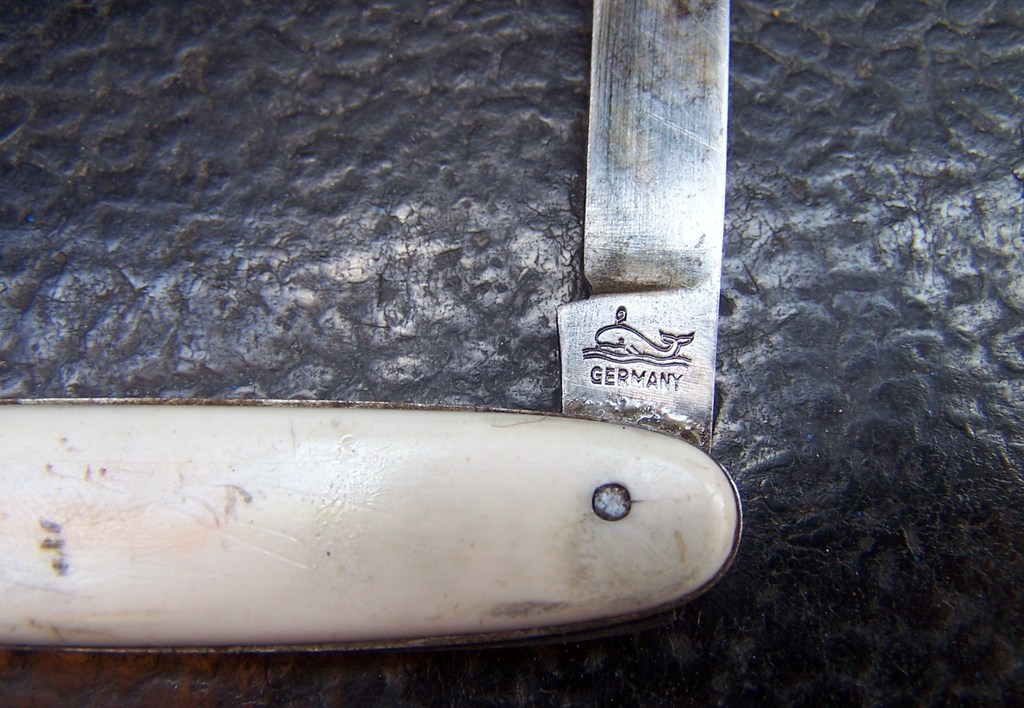 Also found an old Kamp King with a broken main blade, but it had the bail. I paid $2 for that one because I have another Kamp King, (all metal pictured in an earlier post), that needed a bail, so I got an original bail for $2 plus a parts knife. Didn't want to add a photo of a broken knife, so just imagine my all-metal Kamp King with it's new "stock" bail.

Like I said, another good day at the swap!! Cheers!

Well I do know the whale tang belongs to a company named Richartz out of Germany.  I also know you picked up some great knives!

Spend most of my time at hillbilly sales.

Hi everybody looking for some info, just picked up today a Western Boulder knife with a pat# 1967479 anyway i can date this knife ?

Antique stores, flea markets, yard sales, gun/knife shows, e-bay and knife forums.  Gotta say I love the rush you get when you come across those good finds.  Mind you I don't have a bunch of oldies and I mainly have Case.  But going on the hunt and capturing some hot ones is amazing!

I agree.  It is the thrill of the chase, the rush of the find, the feel of the receipt of the knife.  And then on to the next one LOL