A Group for members who believe in and use their 2nd amendment right. A place to show, share and discuss the firearms collected and enjoyed by fellow members.

Interested in when your Winchester was manufactured?  Try this site.

This site contains the manufacturing date information for many different brands of firearms.

Good evening!Just wanted to share a recent project that I was able to complete within the last few days.Over the last few months I had been intermittently been working on making a new set of grips for my Ruger Blackhawk (Bisley).The original ones…Continue

Hey y’all I have just joined this group and website, I am 12 years old and love to collect knives, guns, gold, ww2 memorabilia and much more. I have many folding knives but I wanted to get into otf’s please send your recommendations. I would prefer…Continue

New member and his guns

Hello everyone I am new to iKnife Collector.  Just joined recently.  I not only have a knife collection but am also into guns and…Continue

It has been a while since I posted any critter pictures.

I got three good pictures of this bobcat.…Continue

Just couldn't pass it up.

Was out and about the other day and saw this and just couldn't pass it by.I haven't had a chance to take it out yet but picked up 150 rounds to run throughit when I bought it. I hope it shoots as good as all the magazines claim.I will try to…Continue

Has this ever happened to anyone else?

I was using a fawn in distress call on my caller to try to call up a coyote or bobcat.  I was in one of my shooting houses that I hunt deer from.  The shooting house is next to a fence along the property line with about a 185 yard open lane in front…Continue

Justifiable Homicides up in Philadelphia, CCW Up 23.5% in PA

GOA and AmmoLand Team Up To Analyze Anti-gun Groups FOIAs

Miami Police Covering Up Details of Gun Buyback for Ukraine

You need to be a member of iKC Arsenal Hosted By Charles Sample to add comments!

I have had a Llama before it was a .380 which was the same size and looks at your .22 and it was a good gun.  But I carried it more than shot it so I don't know had long it would have lasted.  From looking on the net all I can find out is some people love them and some people hate them.  I think this one needs a good internal cleaning and then a little shooting.

Ruger has a reputation that can't be questioned so the LCP is of course a fine gun, but I have a Kel-Tec P3AT that I carry.  I guess I can rotate them for EDC.

Rome, the only Llama I ever had was a .22 pistol.  it was basically a scaled down 1911.  It was a nice little gun.  I liked carrying it when out and about in the woods and fields.  Wish I still had it.  I also have a Ruger LCP.  It is one of my two EDC's.  I carry both it and a S&W Model 637 Airweight .38 snub with Crimson Trace laser grips.

I picked up a couple of handguns yesterday, didn't really need them

but was helping out a friend.

The first one is a Llama 4" blue steel .38spl revolver,with adjustable

sights and resembles a S&W model 15. I am not to sure as to the

quality of the gun. Its finish is not bad not colt or s&w quality but not

bad.Came with a box of 158 grain round nosed lead ammo with 4 missing

which from the looks of the gun may be all it was fired. sure it was ever fired. 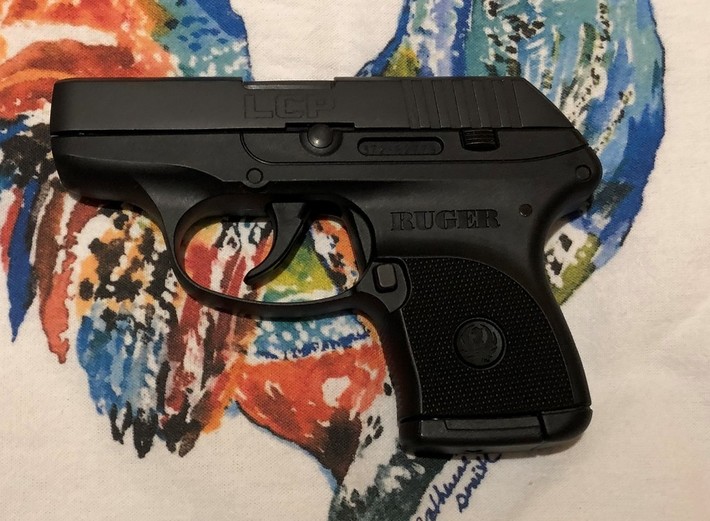 I am thinking Charles they may indeed be up against that from a number of previous customers.  I feel like they used slumping sales to get away from saying because we don't want to sell them.  I have not heard any company with slumping gun and ammo sales.

I will never buy another thing from Dicks. I used to buy quite a bit from them.

Just because everyone needs a good laugh

Phillip, my wife used to shoot my Marlin too.  She isn't able to get out now but when she was, she was a good shot with it.  One day I was standing behind her watching her target with binoculars.  The target was set up at the 25 yard range.  She was putting every shot in or close to the 10 ring.   The interesting part was I could watch every bullet she fired on its way down range to the target.

I had the Marlin set up that way because my son was in JROTC in high school.  He was on the rifle team.  They used Anschutz target rifles supplied by the Army.  I equipped the sights on the Marlin as close as I could to what he was shooting on the rifle team so he could practice on his own.  His junior year he was the top individual shooter in the North Alabama Rifle league.  He beat another kid from another high school by an average of half a point.  That kid later went to the Air Force Academy and made the rifle team there.  My son's senior year another kid on his own team beat him for high shooter honors by a total of seven points.  So since each shot was worth ten points, that means the difference between them for the whole season was less than one shot.

Interesting that you mentioned the Mountie, and especially the accompanying photos. Sometime in 65 or 66 the wife and I were living in an apartment in Loveland and became acquainted with another apartment dweller  who was a gun nut also. Back then we were poor as church mice, (really haven't improved much) so our entertainment was a weekly trip to a farmers dump east of town out in the dryland, to shoot misc. junk and towards evening, after they became active, rats. At the time I had the 1st 10-22 that was shipped to Loveland and an OLD, WORN REM M-12 that worked most of  the time. One day we invited the neighbor to come along and lo and behold he had a Mountie, virtually identical to your photos, sling, receiver sight and all. Unfortunately the barrel had a ring in it but that did not seem to affect the accuracy even a tiny bit. Martin, the neighbor, let my wife shoot the Mountie. When she finished the 1st magazine she turned to me and said, "I really like this gun". WOOHOO! I was working for less than $2.00 an hour but I went down and put a Mountie on lay-away. If I recall correctly, I paid $72.00 for it. Took a while to pay off. Gave it to her for Christmas. She would consistently out shoot me with that little rifle.

Many years later I purchased a REM 40-X Sporter, repeater, and set it up with a Leupold 3x9AO mounted in Buehler base and rings, Canjar single set trigger and found a case of WIN pistol match ammo that it loved. I made a set of swinger silhouette targets, the scaled down version of the full sized silhouette targets,  and  when we would have  time, we would shoot these targets. Sad to say, but she would invariably out shoot me. The longer it went, the madder I got and, naturally, my shooting deteriorated in direct proportion to my anger. Understand, my anger was NOT at her, just the fact that here I had this hoity-toity deluxe model rifle and she was showing me how it was done with just a plain old iron sighted Mountie shooting cheapo WIN Wildcat ammo.

Well, here it is 50+ years later, she still has the Mountie, the REM is long gone and I would wager she could still outshoot me with whatever I chose to use.

Phillip, thank you for joining the Arsenal group and thank you for posting.   You and I are about the same age.  I was born in 1946.  I like guns also and was into guns before I was into knives.  I have never done the AR thing.  The closest I have to an AR is an SKS.

I do have a cell phone but it is a bare bones little flip phone.  My seven year old grandson keeps telling me I need to get a smart phone but I do not want one.  I come from an era when our telephone was a big wooden box hanging on the wall with a crank on the side.  And we were on a party line with about ten other people.

I like .22's also.  I have five, three pistols and two rifles.  I do have a 10-22 but I also have a rifle that might be interesting to you.  It is a Marlin Golden 39A Mountie.  According to the serial number it was manufactured in 1967.  It has had many thousands of rounds fired through it.