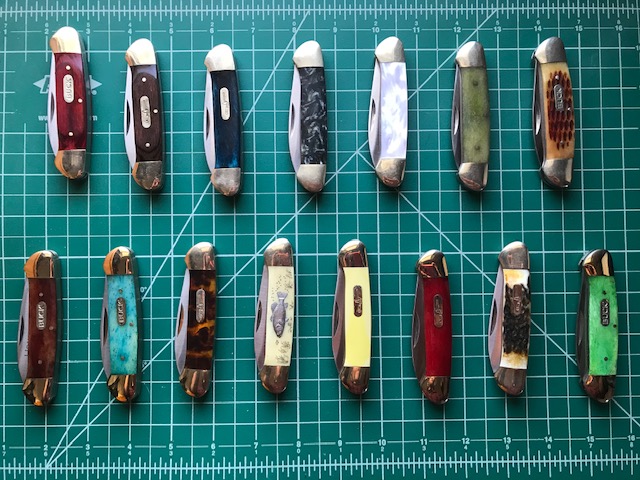 This is most of my collection (I have purchased a couple since this photo was taken).

Nice collection! I really like the fish shield. I need to get my folders out and take some new pics. Thanks for sharing your canoes with us.

I totally understand, JJ.  I'm actually going through a phase where I'm getting more into colored scales & handles -- I've got so many blacks & browns & greens & greys in my knife collection, it really feels like it could use some color.  That said, I'm not usually into faux mother-of-pearl.  I had to pick it up though, since I realized I was almost organically growing a Buck Canoe collection.

I don't have the largest collection of 389's (I've seen slightly larger), but it is one of the biggest I've seen.  Not because of anything heroic on my end -- very few people have built collections of Buck Canoes, and I just like them (being a Minnesotan helps -- great associations with actual canoes -- but they're also really useful, comfortable, office-friendly multi-blade knives).

And there are few that versions I know exist that I don't yet own -- pink bone, and blue jigged bone, as well as a version of the fish knife with a gold fish (exceptionally rare), as opposed to the silver one pictured above.  That's actually been some of the fun of it -- trying to find out what even exists out there.  I'm hoping to get all the versions made by Buck, & hopeful that I'll collect some that were modified by others after the factory.  And maybe I'll even find one modified by David Yellowhorse or Santa Fe Stoneworks...

I know people really aren't into the Chinese Bucks.  That said, it's still Buck, so I thought there would be more people with all kinds of Buck collections, including Canoes.  Regardless, I like 'em, so I'm going to keep collecting 'em when I can.

I like it better than the one above it.

I'm not really into colored scales, but Ida picked that one too.

I shouldn't be surprised by this maybe, but the one I've gotten the most questions about is that greenish one in the right-hand column, second to the bottom.  It's bone, it's the same color on both sides, and there is no shield.  While it could be a custom-made piece, it's hard to imagine someone would remove perfectly good scales & replace them with those sickly green monstrosities.  I kind of wonder if it was a factory error brought home by an employee.  Regardless, it was such an anomaly, I new I had to have it!

Chris Sparks added a discussion to the group Case Fans