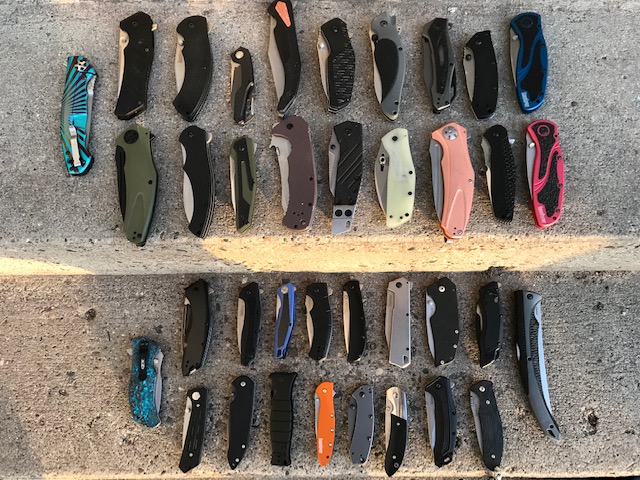 I love Kershaws. They've been my go to knives for EDC for years. I have Kershaws from the 1990s that I've put away.

Then lo and behold, along came top of the line Chinese knives with names I've never heard of. --- CJRB, Civivi, Kizer, QSP, Artisan, WE, etc., etc. These are my everyday carry knives now. How times have changed.

And I left Kershaws behind! Oh my, oh my!! Maybe never to return.

No Scrambler? How can that be?

Being that both the original and the Blackwash are discontinued items, we'll have to see if we can't get you outfitted with one with "low miles"....if for no other reason than the name - Scrambler! And, it comes with a reversible pocket clip, which I know scores high points with you!  :-D

Hmmmm....gonna have to think on this for a bit

Lars, I actually have acquired a few Kershaws since this set of photos was taken...  :/

The Crown with the blue scales is in the next group photo, in the clam pack next to the customized ZT 0452 (upper left).  Occasionally I leave knives in their packaging, for collection purposes.  I admit it, I have more than a few safe queens in my collection...  And as far as that Scrambler, I think that's one that actually eluded me, never made it into my collection.  Though looking at my collection of Kershaws, you'd think I'd have at least one of those...

And I'm not sure I ever set out to have a "Kershaw collection".  Some were just too nice not to buy, & others were really affordable EDC's that I hoped would work well in my pocket.

At one point, & this was before I got into knife collecting, a friend let me handle his Kershaw Scallion, & before this I'd never experienced an assisted-opening mechanism.  It was so close to an automatic knife, & totally legal around here, my jaw just dropped (metaphorically speaking -- okay, & maybe literally too).  When I finally did get into knife collecting (really only a couple years later), I found out how much more expensive autos were compared to those Kershaw assisted openers, so I started acquiring Kershaw "A/O's", along with some other non-assisted Kershaws (& of course other knives, too).

Eventually I started preferring non-assisted opening knives, but occasionally couldn't help but pick up another Kershaw -- some even non-assisted, and some fixed-blades, too.  And some with the A/O feature, like the Vedder.

And Kevin, I do really like that Vedder profile, along with the fact that it was named after Eddie Vedder.  I wish it wasn't so heavy, but I imagine a number of people have said the same thing about Pearl Jam...  :)  Anyway, I hope to see photos of that upgraded Vedder whenever you complete it!

This is just a sampling, right? :-D

Hey...where's the Crown with the blue scales? Did we forget him or sell him? And I thought you had a Scrambler as well....no? Dang that is a a lot of Kershaws!  I think you have more Kershaws than I have total knives!   LOL

I just have 1 Kershaw (Vedder), and that one I am in the process of 'upgrading'.  The G10 scales scales were not very visually appealing.