A collection of straight razors , I guess !

I feel that I have to admit that I am becoming a collector , this may sound strange as I am writing this on i Knife Collector and this is ...well the place for collectors .

I have never really collected anything before , in the past I have always had a pocket knife and sometimes two or maybe three but never anymore than that.  I have had knives since I was eight or nine , something like that anyway and I can hardly remember a time when I didn't look in shop windows at knives . When I went on holiday with my parents they would ask if I wanted a "bucket and spade" for playing on the beach but I would end up looking at penknives in shop windows . They were usually rather small and cheap often with the name of the resort on the handle , I am told some people collect these now and I could see a sort of period charm about them . I have seen them for sale in antique centres and sort of recollected owning them as a child . Of course what I really wanted was something more akin to a Bowie Knife but as with all children I knew how far that I could push things and Bowie Knives had to wait till I was a little older , around ten or twelve I think . Strange but I am 63 now and would be arrested if I was found walking around with the sort of knives that I had at twelve years old .

Well now to come back to my confession , three years ago on my sixtieth birthday I ordered my first knife from the States . A GEC Cody Scout in black micarta , model 72 and it ticked all the boxes in a knife for me at that time . It was the sort of knife that I had wanted for years but without having access to a PC I hadn't known that such knives existed . A couple of years before that I got a PC for the first time and just before my sixtieth birthday had discovered on Youtube the videos of how GEC make their knives , I was smitten , these were the sort of knives that made my world revolve and I just had to have one . Sixtieth birthday who could complain , I had not bought anything online at the time and buying that knife felt like a big step and from the States as well !!!!

One knife that was all , I had only ever wanted one good knife . Opinels had been the best knives that I had come up with ,  good carbon steel , inexpensive so if you lost it then it wasn't a big deal. Losing knives was something that I had to consider as I had lost just about all of them apart from some I had given away and rather a lot that had proven to be pure junk .

Well this GEC was to be my one and only GREAT knife that I would carry from now to dropping off the perch . Rather a lot to choose from though when you  look at the number of models produced by GEC , good job I didn't know of the existence of Queen , Case or any other makers . So after a great deal of worry and stress the knife turns up in the UK and... "Happy Birthday"... thanks to the GEC and a little malt whisky it was as well .

I have a few knives now though I expect that most on iKC would think my collection modest .   When I had bought just a few knives it began to dawn on me that my sharpening skills were lacking .  I could put a bit of an edge on a knife and had done so for years but when you start to buy good quality knives with the intention of using them  then it would seem wise to learn some sharpening techniques . So I did , youtube is great for that , I know some poor fools who think that youtube is all about talking cats and have no idea what a fantastic resource it is !  Having learned to sharpen I was returning to the house after putting an edge on a Fallkniven when I tried shaving arm hair , as you do , what a revelation it took that hair off like a razor !... and damn it all I was smitten again !

I could just buy a razor from eBay and try to sharpen it up see how I get on , right yeah course you can , there is a pattern emerging here I think . Just one razor learn how to sharpen it boost my skills etc.

I have eleven working razors and have started to look at different types of razor ,  things that I didn't know existed until recently . Up until buying a frameback razor it was possible to argue , with less and less conviction admittedly , that I needed one or two extra's in case I didn't have time to sharpen one in a morning and then i would have a spare . However when you start to look at razors from a collectors point of view then it becomes rather difficult to argue that you are not collecting them .

So here I stand ,  I am at last willing to admit that I am indeed a collector of straight razors  .

So the idea of this blog is to give me a place to witter on at length about my new-ish  found obsession with cutthroat or straight razors . The other blog I will try to restrict to shaving stuff and this one will I hope be about the way you can build a collection of straight's at little cost . It has to be "at little cost" because I have limited spare cash and was brought up in Lancashire in the fifties when nobody had any spare cash .

So next up a little about the different types of razor to be had on eBay.

These shavette things are used mostly by barbers and hairdressers Jan because of being able to change the blades for every customer, health and safety thing after the AIDS business. Some people think they are great and they are much cheaper than buying a new cutthroat, which retails from around $100 to, well, the sky is the limit over here. I am told that they are very different in feel due to the lightweight nature of the beast, not much steel in them.

Course I don't have too much difficulty affording my razors as they tend to be rather old and in need of a little TLC.

I am wondering how well the shavettes will go over with the straight razor users?  I would imagine as with any sharp object group there will be the purists that say if you cannot sharpen it, your not true.  And there will be those saying, why waste the time and it should last longer as the blade is replaceable.

I am with you John, half the fun would be learning the skill

Yes, Dale, they can be very old 1880's or so. Don't think anyone makes them anymore. Some of them had detachable blades and came with a bunch of spare blades I guess so they could be sharpened on a Sunday and used during the week.

There is a newer sort of straight razor called a shavette, a lot of these use a half of a razor blade, a DE blade broken in two. Pic below, I have never used one myself. 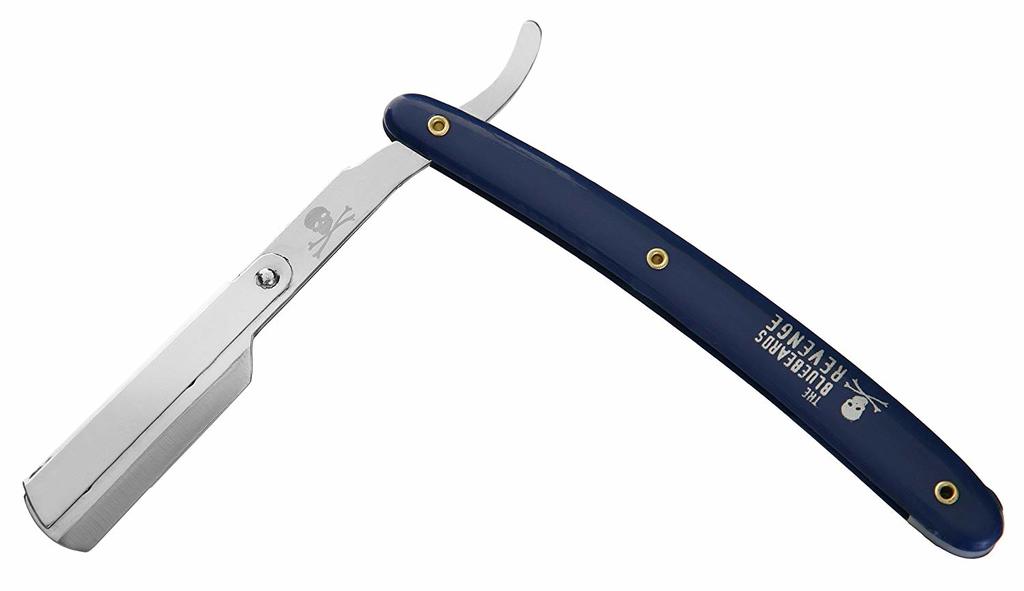 You can see the way the "blade" opens to fit the disposable razor blade in. The benefit of these things is that you don't need to learn how to sharpen a straight. As the reason I started using one of these was to learn to sharpen it sort of defeats the object for me.

Are framebacks an old design ?

.
I've not purchased any based on the assumption or misconception

they were a newer design than the "traditional" straight razor.

Did I screw up .. incorrect assumption ? 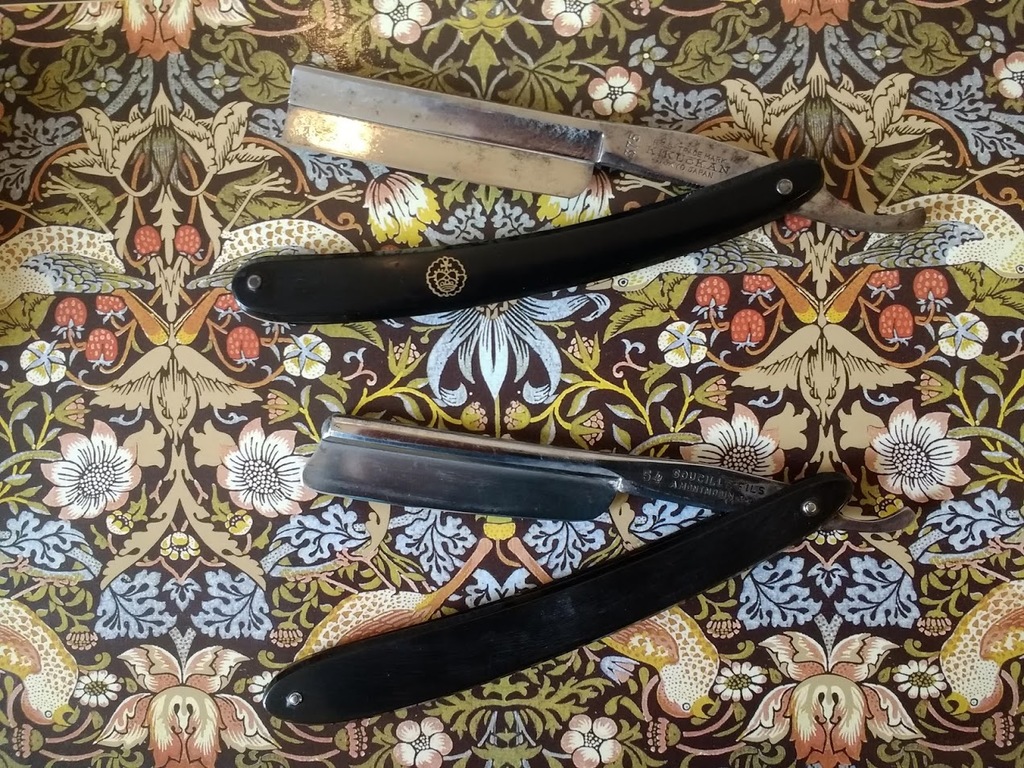 I bought the French frameback, Soucille-Fils, a year or so ago. It shaves very well so thought I should try a Japanese version, Kikuokan, will try it out tomorrow

Thanks Dale, I will sharpen it up next week and see how it shaves.

Nice find, John.
Many of the razors I found while collecting them came in boxes that were not the correct boxes. I think the antique folks didn't expect anyone to know the difference.

The razor itself stands alone as a good deal. 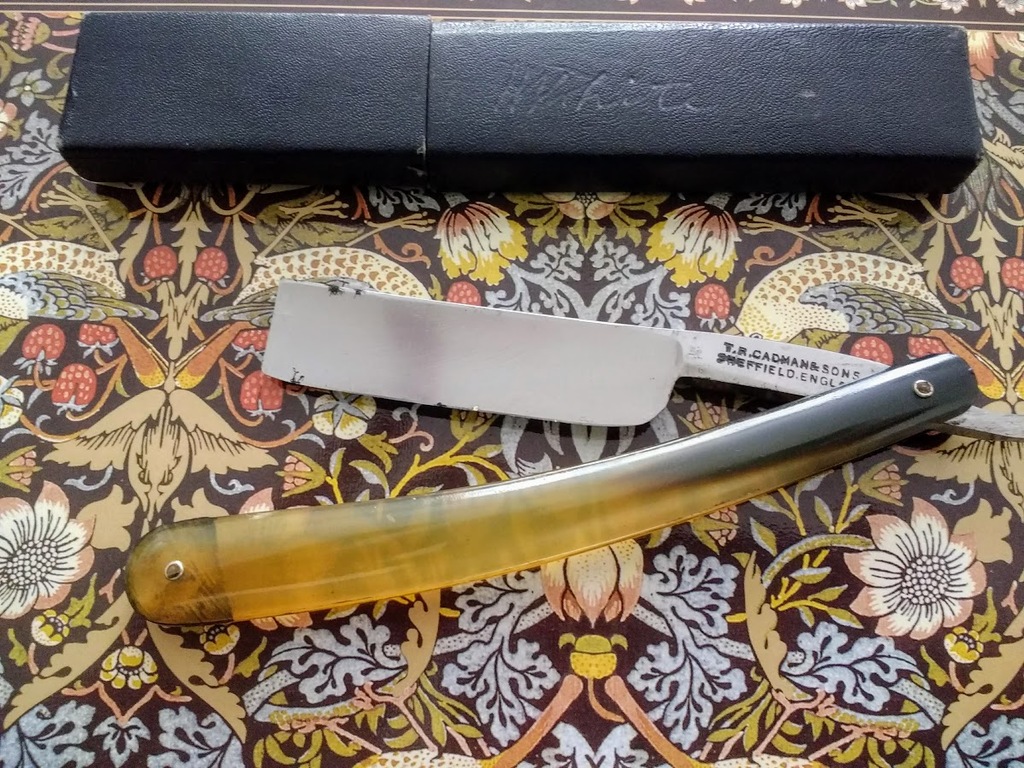 I have been looking for a razor from the First World War for a little while now. There is no really good reason for this, just a whim I guess. The question that follows is, do I want a razor that has been in the trenches for a few years over a century ago or one that was issued around then but had an easier life?

I don't really know the answer to that, except that I don't need razors that are just decorations. Well, this razor came up on youtube last week and it looks right, though it has seen no use at all as far as I can see.

The vendor says it is known in the family as Grandads First War Razor, though they admit that it has the wrong name on the case. However, the case looks too new to be original and the razor has no regimental markings on the horn scales.

I am going to call it my First War Razor, it is as you would normally expect them to look excepting the as new condition. A near wedge horn handled Sheffield razor for £10 and only a little bit of rust, can't be bad.