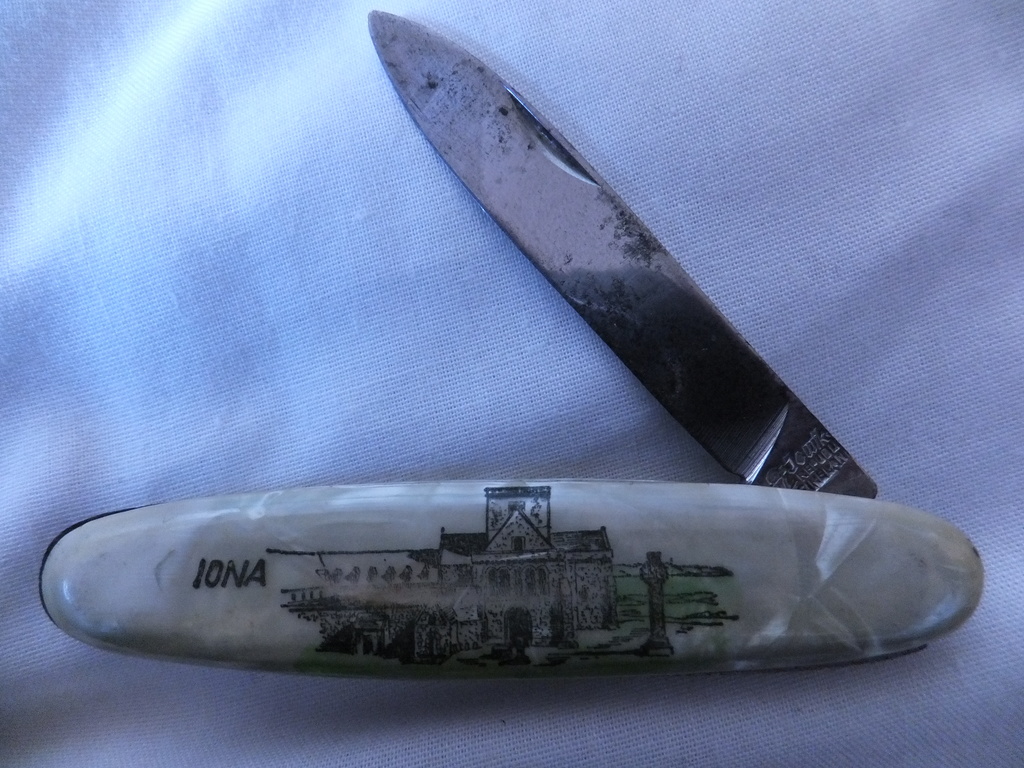 Bought this knife as a kid whilst on a trip to the Holy Island of Iona ,off the West Coast of Scotland it has been hidden away for years in my mothers house and I came accross it recently, brought back the thought that maybe this was the start of a facination with cutting tools- I did a little research on it and it was manufactured by a German company who set up in Listowel in the Irish republic in 1960, there name was Jowika,and mass produced various models incuding this one, they were bought out apparently by Imperial Shrade in 1978 the picture is of Iona abbey which today is still very popular with tourists, I went over again about 2 yrs ago with my wife as we were having a long weekend in Oban, we ferried over to Mull, along what was mostly a single track road and then another ferry to Iona, It certainly is a lovely place to see.
I would not expect this to have cost me or my aunt who I was with at the time much more than pennies.. I reckon it is now 46 or 47 years old..

do you remeber or still have yours ???

by the way- not too sure why nuns or the like who run the Island wanted to sell knives, I would have though pencils/pens and books would be more favourable..

I remember it like it was yesterday.Folder with pearl , almost 1 3/4 blade. My birthday in kindergarten. I had a chain for the belt. Of course I was admonished to never take it to school no matter what all were sworn to oath, mother was just swearing. .First day of school So when the big kids tried to pull my chain so to speak,   the knife fight was on. Teacher took it away, for the year.  I said nothing and did not hear about anything about it . Later she actually gave it back that spring. I wanted to marry that teacher, but never got around to it.

True Ron, so very true, but I do like quality as well, I dont think I have a cheap tool in my bag/tool kit, I always felt that the better you buy the longer it will last, this is so true with good manufactures of tools, such as Estwing, Bacho of Sweden, Dewalt/Stanley B&D (who now employ me) to name a few. from a screwdriver to a wrench and my working knives, I like to think they are all good hard wearing kit, I do have a couple of cheaper fixed blades in the tool box, but they are pretty good and my leatherman wave with the tool adapter etc has came in handy also one buck tool, my test meters are all from fluke, as they are one of the best.

I have some cheaper knives I bought on a whim , probably on a weekend with a few jars in me-  I will stick them into my photos one day soon , just to remind you all wot not to buy..

Your honesty is refreshing, George! And, yep! Life certainly does take some interesting twists n' turns, don't it?

When I look back at all of the really nice knives and guns that I once owned--heck, houses and cars--that were sacrificed upon the alter of my stupidity and ignorance, in pursuit of other passions in the moment. I can only heave my chest in a sigh of disbelief and hope that I have benefited from my experiences?

As the song lyrics best express; "What a long strange trip its been."

Thanks for sharing, George!

Comment by George Clarkson on June 5, 2013 at 13:51
Second that Ron, Great story zilla, as for my addiction, not too sure I am, but I do like a few drams of Scotch Whisky come the weekend, probably more addicted to that- but I do have a few knives hiding away in the drawer, I did have plans to display them in a cabinet, and at one time I was trying to collect as many Buck 110's with different date stamps but this was mostly via Ebay -USA , sadly I am now prevented from doing so, but I did get a few real bargains I would say- that scout knife you had, I have a vague recollection of having a similar type of one in my posession as well when I was a teenager but not too sure where it went, probably my Old Granfather confiscated it when I was otherwise occupied- seem to remember that it was around this time the young ladies began to look a little bit better than a sharp knife !!!- now all the passion has turned 360 degrees- Glad the wife ain't a member here-LOL

Good stuff, 'zilla! Loved the read -- thanks for sharing all dat!

And, sheessh! I can't even remember what I had for breakfast. Much-less what happened 60 years ago.

CRS will do that to ya, though.

Hey George.  What a great topic, ie: when and how did you first become an addict?

My first knife was a blue scaled, brass lined, cub scout knife.  I traded a Duncan top for that item of craved beauty at age 7. Not soon afterwards it was stolen by someone who must have been an connoisseur of fine cutlery.  History has proven that kid had an eye for collectable value.

It probably still looks about like this.  BTW, if you find it, please let me know, I would like it back. 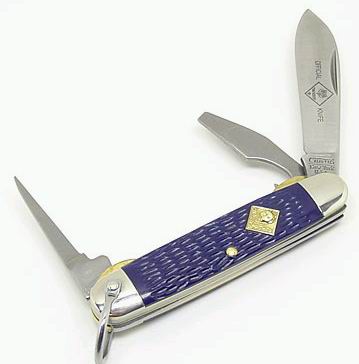 The first knife I ever paid cash for was an inexpensive, but pricey for me, Sabre.  I was 8 years old by then, and working a paper corner on Wilcox St. in Los Angeles.  Not a safe job, even then. Today, it would be like saying, "Paper, paper, get your paper mister, and kidnap me".  Anyway, back then I needed the money, but I also knew that I was a sitting duck.  Missing my old and short lived Scout knife, I figured I needed a new edge, so on an afternoon before heading off to work, I went to the hardware store around the block from school on Western Ave and picked out the biggest and baddest looking pocket knife I could get for under $3.75, including tax.  It was a yellow scaled Japan built, Sabre fishing knife.  This was way before the days of tactical locking blades, but, even then the folks at Sabre knew how to deliver a sharp factory edge.  So, as you might imagine, that knife drew pain and spilled blood of my uncoordinated kid fingers more times than I care to recall.

It also did get me out of tight jamb once, though, when a low life kid from another hood tried to jack my Whamo Turbo Tube at the local corner park. In response, and in complete fear, I pulled my sharp as hell and scary looking Sabre knife from my back pocket, fumbled until I eventually deployed the blade, and then pointed the shiny end at him and said, "give me back my Turbo Tube, axxxxxole".  I guess this surprised the crap out of the little guy (but still much bigger than me), because he responded, "holy sxxx, yo got a knife".  He gave me back my Turbo Tube, apologized for the misunderstanding, and explained he had only planned to borrow it for a few days.

Thankfully, this stuff does not happen very often anymore.

Somewhere in time that knife disappeared too.  If it's still around, with this much time under the bridge, today it probably looks about like this.  BTW, if you find it, it's yours.  And please be sure to watch your fingers, those things are sharp. 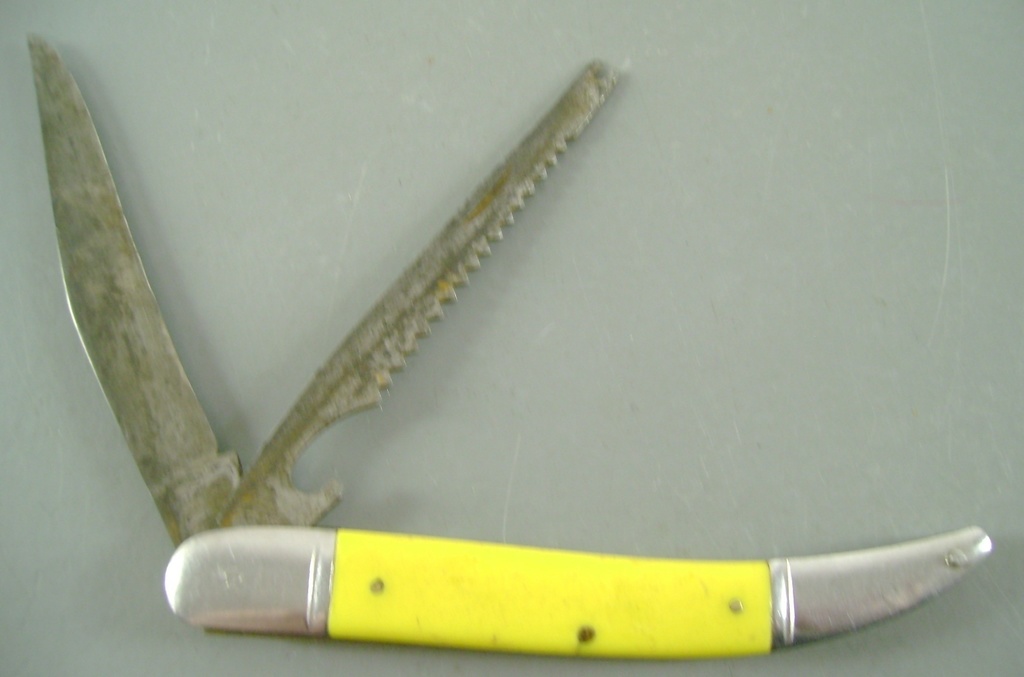 I'm not 100% sure. But I think my first knife was a simple Opinel. And I might still have it around somewhere. It's looking awfully battered. But it still takes an edge unlike anything else.

George, thanks for the history. I have some Jowika knives. Maybe the nuns new a knife would outlast a pencil and had a better markup!

Very, very first knife? I remember it very well, but I don't have it, and it was a LOOONG time ago. It was in the late 1950's and it was a blue handled Cub Scout knife......I would guess made by Camillus.

Ron, it sure isn't the beast quality, but hey it has lasted for yars -LOL

Featureddead_left_knife_guy replied to Nicholas oliver's discussion I have a rather large buck knife that is really awesome.
1 hour ago

Featureddead_left_knife_guy left a comment for Brandon Kelly
16 hours ago

Featureddead_left_knife_guy replied to Tobias Gibson's discussion Which steel would you choose?
17 hours ago