I bought this blade as a Civil War era Russell Stag.  It certainly looks like it fits the era and certainly is an old knife.

The primary tang is marked

The reverse of the tang is blank.

The blade has been worked....a lot.  Sharpened and shaped.  It may be the sharpest knife that I own.  A big, fat, heavy, beefy blade.

This thing is like 4 5/8ths inches closed, 7 3/8ths open.  It has a ton of snap both directions and strong stops for an old knife.

The blade is etched on the same side the tang is marked.

Although the lettering is worn, it clearly says KNIFE.

I tried to show it in the photos ut it is a challenge.  Imagine if you had it in front of you and the bottom half of the letters KNI were rubbed away plus the bottom 1/3 of the F.  The E is fully recognizable.

I am looking for help identifying what this may be.  To me it looks like some of the Navy knives I have seen from that period.  A Rigging knife or something.

Has anyone seen this knife or owns this knife?  Any leads on further identifying it?

It was simply sold to me as I said as a Civil War era genuine India Stag.

Thanks for looking and for the help folks!! 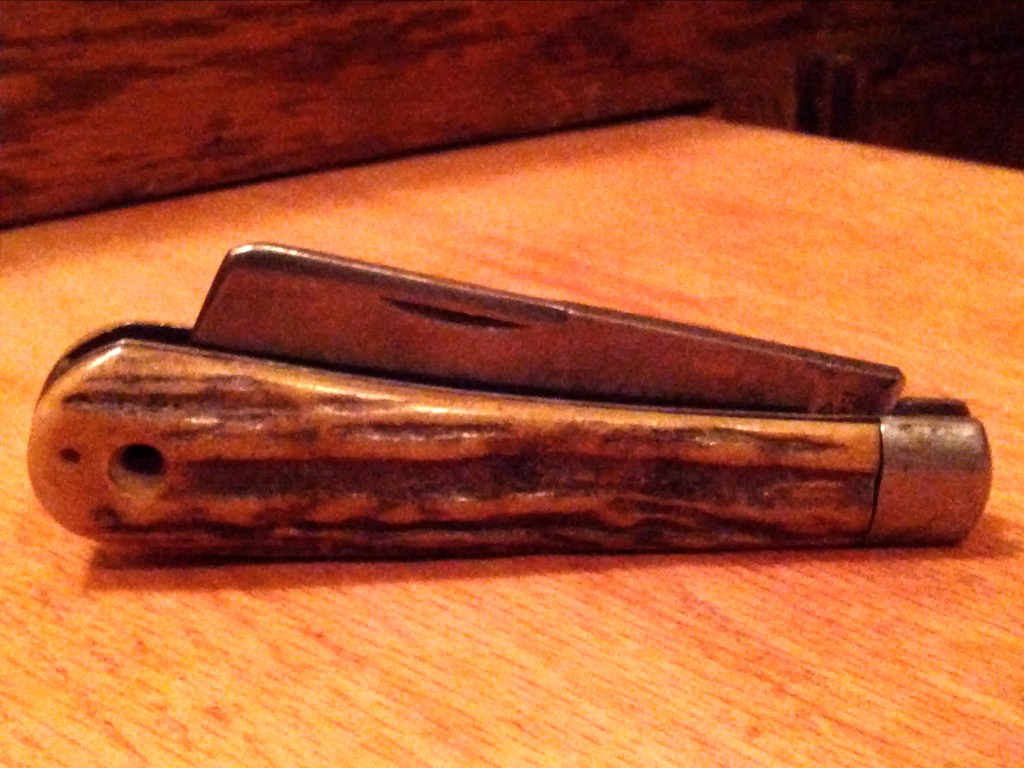 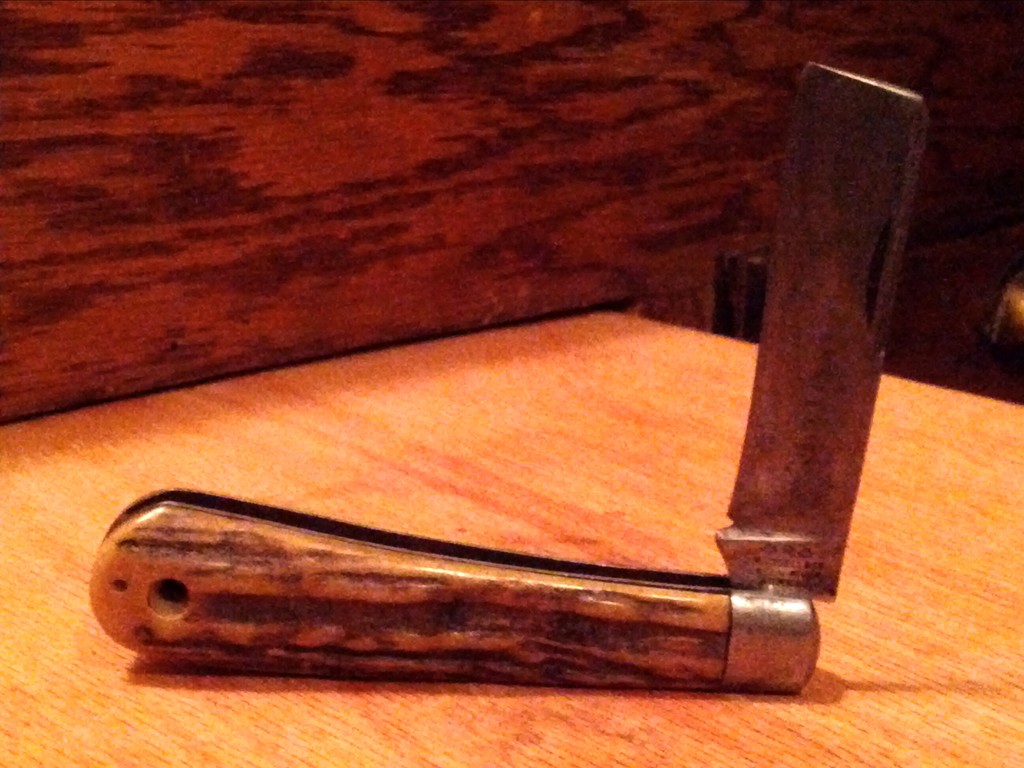 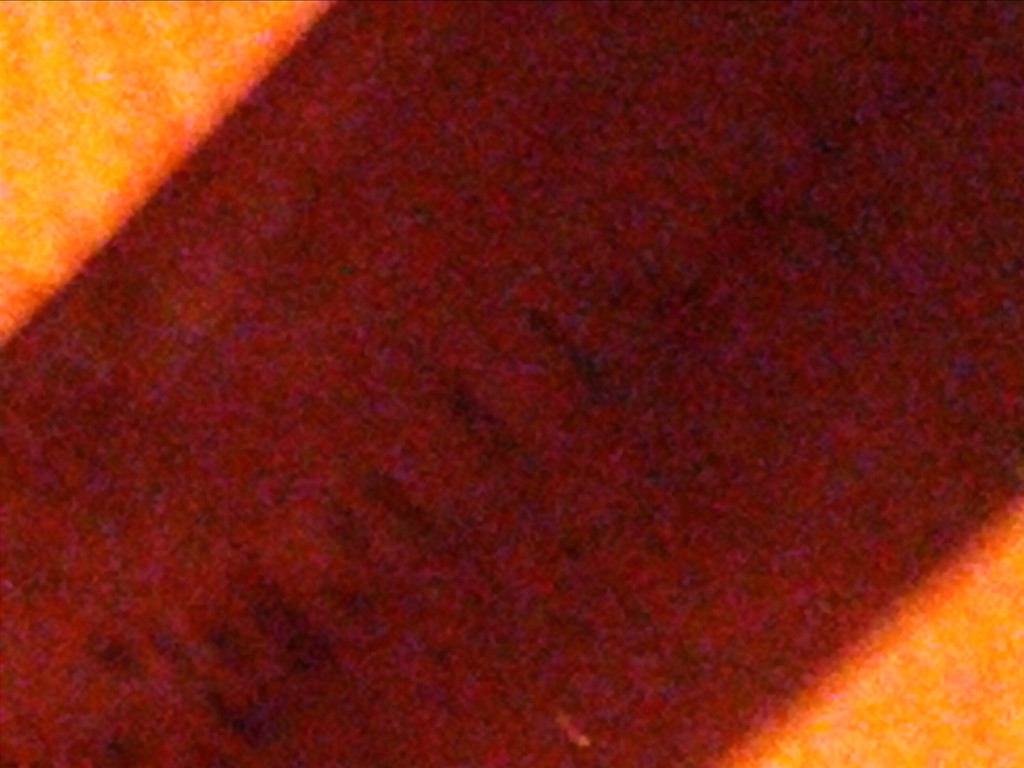 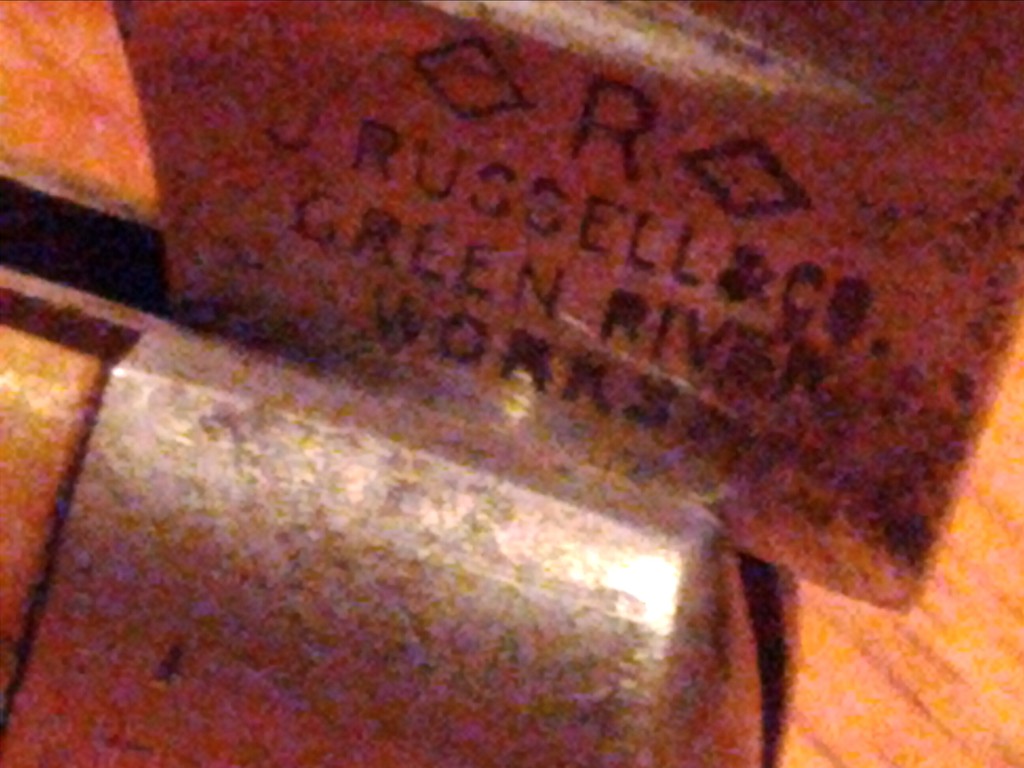 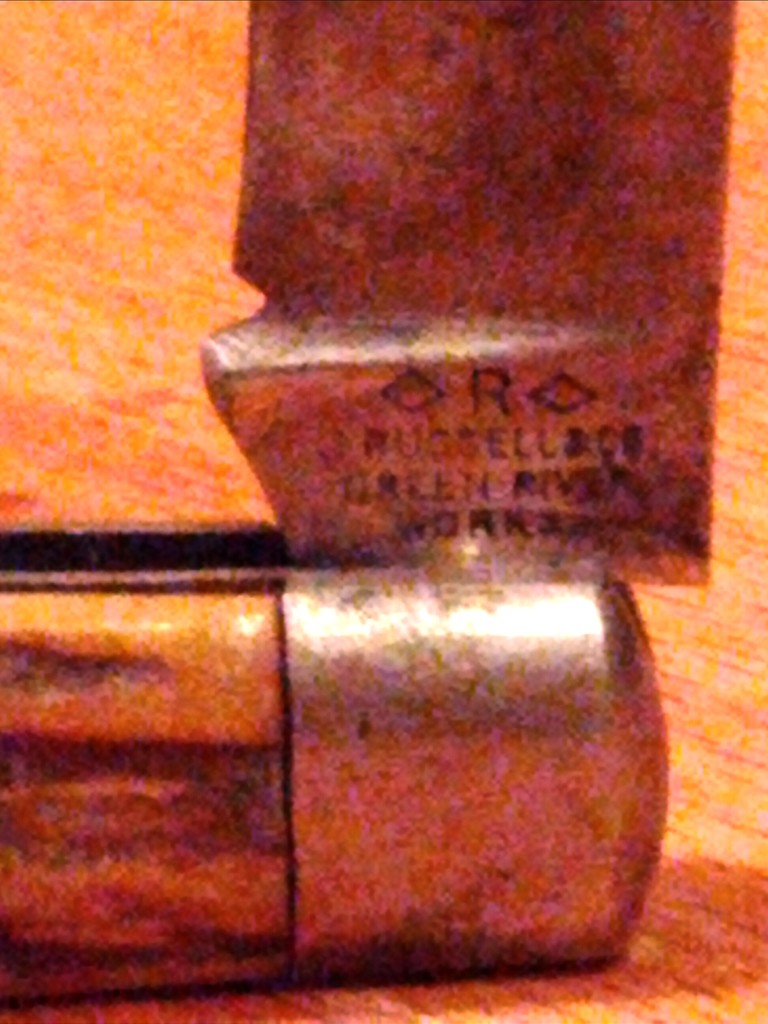 Thank you for your help and information Terry.  Yes, I have seen a few (pictures) that have bails.  The others are Cocobolo wood handles.  Now I have learned that the Stag handles are proably original to the piece.

A lanyard hole!  That makes a lot of sense.

I am looking now for some knife that could be used for pieces and has a large brass bail.  Seems that Russell used brass on these knives, and that would be a good fit.

Very nice knife!  One of my reference books, by Levine, shows a John Russell sailor's knife virtually identical to yours and notes that they were made wood handles.  The knife pictured has a bail, which would explain the small hole in your knife.  Russell made Barlow knives with both wood and stag handles, so it's plausible that yours was originally made with a stag handle.  Since your knife is missing the bail, it might be that a previous owner couldn't or didn't want to replace the lost bail, and drilled the larger hole as a lanyard hole instead.  That's just my guess, of course.  Sorry I could add much to the replies you got from JJ and the others.

Thanks JJ I will do that.

Today I couldn't help bumping into these old Navy Knives everywhere.  I found one outrageously priced  one same as mine except with the Cocobolo handles.  Guy wants over $400 for it.  He's a smokin something.

The other also has Cocobolo, in better shape and $140 cheaper.  Think I may buy that one because the etching on the blade is just supreme.

They both said that the Stag handles are the rare ones, so that is good to hear even if the condition of mine isn't prime.

It does look like an old hawser knife.  Might check with Terry Waldele.  He has a good selection on Naval knives.

I think maybe my research has solved part of the problem.

The knife is a Navy Knife and originally the knife blade was etched like this:

The "R" had the arrow thru it which identified the Russell's of the time.

I found that in  the book Big Book of Pocket Knives Identification & Values on page 297.

It presents the issue you see Steve:  the handles.

It says the handles should be cocobolo.  So I am thinking that either the knife was made after the  original run with cocobolo, or someone replaced the original handles with these stag handles.  That is a possiility because the handles are in good shape.  But it fits like original and it does have the two holes at the far end just like the original knife with the cocobolo had.  A hole for a Bail and a 2nd hole...not sure what that is for (?)

But, it's a Navy Knife and that answers part of what was confusing my poor little mind.

One very small crack extending from a pin.  Even with my 30x loupe it is hard to tell if it's a crack or the stag.  But the stag is in great shape and looks like it could be newer than the knife.

I'm hoping someone here has this knife or has seen the knife....or has books I don't have that can help me .

Boy I sure do like this Big Book of Pocket Knives Identification & Values .  It is excellent.

I found some of the history you were talking about in another book Steve, but you explained it better than the book does!