CVA (Connecticut Valley Arms) was a pioneer company that brought back the black powder shooting sport in the early 1970s. CVA was originally located in Haddam, CT, along the Conn. R., hence their name. They started with reproductions of traditional American muzzle loaders like the Kentucky Long Rifle and offered them in finished and kit forms. All the firearms were made in Spain and packaged in CT. I don’t know if the finished guns were assembled in Spain or CT. 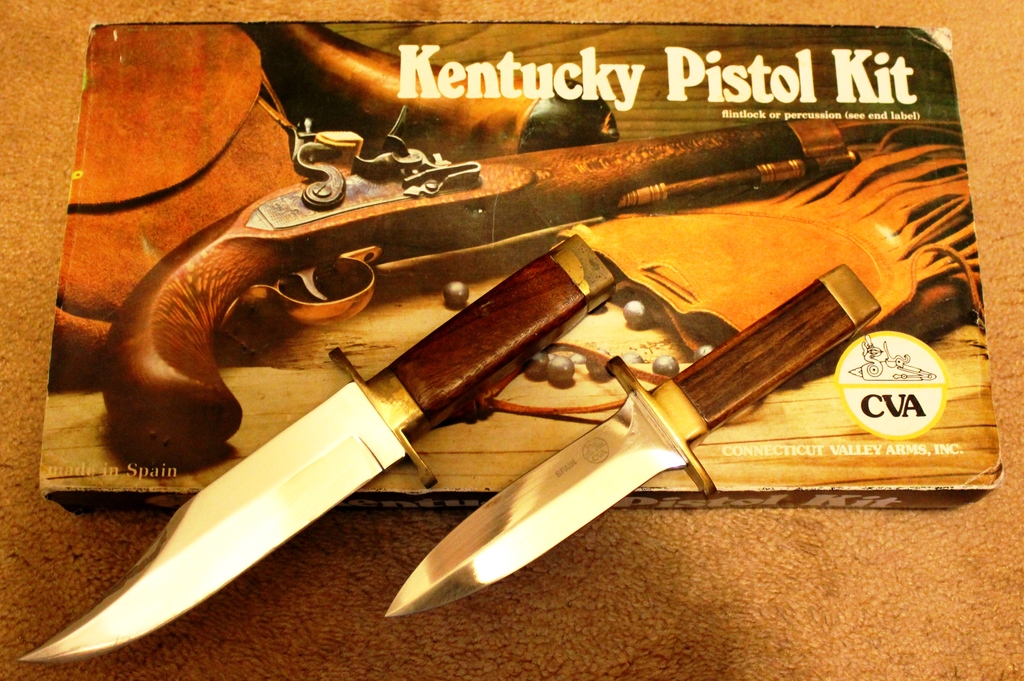 In the late 70s they got into marketing knives. They called the series “Trail Knives” and they were modeled after traditional frontier knives. These knives were as authentic as possible and they were sold only in kit form. The Trail Knives were affordable, easy to assemble, well made, functional, comfortable in the hand and were quite impressive. The parts were made in Italy or Spain depending on the knife style. I’ve heard later they were made in Taiwan but I can’t verify that. These knives were offered from about 1979 to the mid-80s when the company moved to Georgia. The picture below shows the models available in 1980. The most popular seems to have been the Trade knife which looks similar to J. Russell & Co.’s Green River Works.  All the knives are etched CVA but only some of them have the country – Italy or Spain – marked on them.

The Trade knife pictured below has no country marking on it and I’m wondering if the blades did come from Green River.  I started assembling this knife twenty-two years ago! I picked up the kits when they were first offered and assembled a few. I must admit I was more enamored by CVA’s knives then by their muskets and pistols. I guess that’s the knife collector in me! 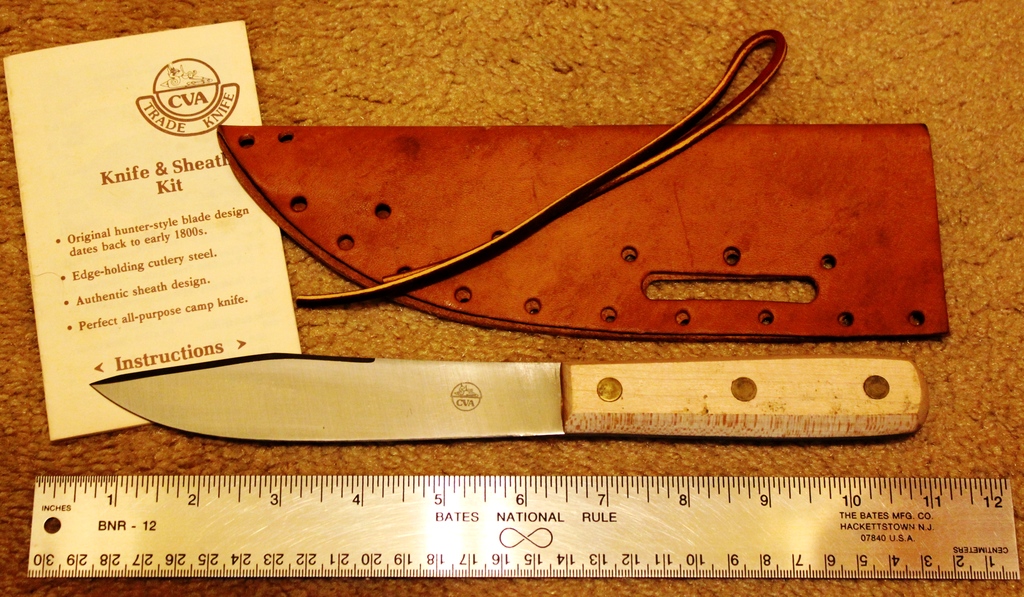 The knives are German 440-C stainless.  CVA’s instructions say that if desired “…rub the blade with either onion, tomato juice, mayonnaise, or lemon and let it sit overnight. You’ll notice in just one night that the blade will begin to age.” 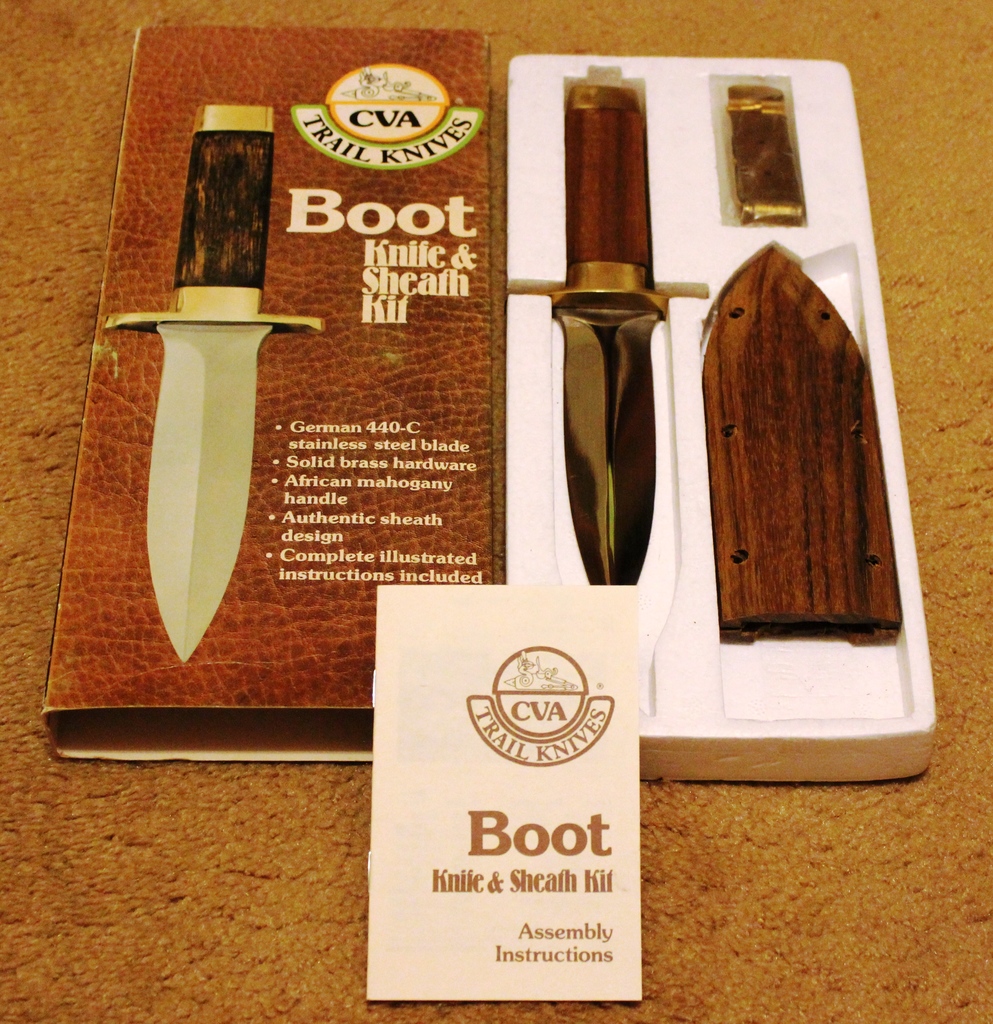 Personally I’m impressed by the Bowie and Boot models. The Bowie, Boot and Toothpick models are readily available even today and can sometimes be found in kit form on line @ eBay for example. That’s probably because they were purchased more for show. I had a Boot knife on display next to the Lenox in the china cabinet. That didn’t go over too well at first but no one ever inquired about the Lenox as far as I know. :) 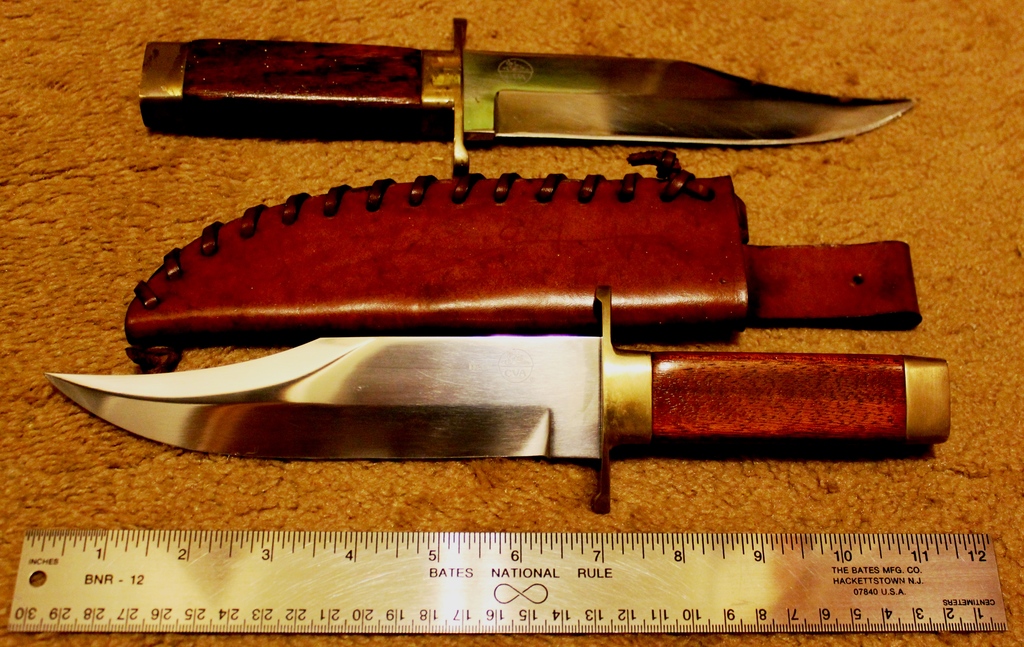 After the Trade knife the Skinner seems to have been the most popular because it probably was the most functional. I’ve never seen it offered in excellent condition today. All have been sharpened, well-used and a few are well ground down.  What I NEVER see now is the Hunter model pictured on the far right (in the second picture above). That’s the mystery model of the group, at least for me. A lot of times the Bowie is listed as a “Hunter”.

Somewhere around here, I've got the CVA Bowie.  Didn't like it as much as the Trade Knife.

My trade knife has done most everything from filleting catfish to chopping cedar fence posts.

If you can find one, get one.

Wow! I got all excited that two places still had CVA stock. Images of NOS and the elusive Hunter dancing in my head! It was too good to be true. Both places carry current "frontier" knives in kit or finished form. Tracks of the Wolf also seems to take on consignments?!? In reviewing their stock I noticed that they had a "notify me" button to click on instead of the "add to cart" button. Maybe it's a back order process.

I really do appreciate the information though - it adds excitement to "the chase" all of us collectors get drawn into. Thanks again.

Great Post, and very interesting. Two companies that still sale some of these knives are "Crazy Crows Trading Post" and "Tracks of the Wolf".

Comment by J.J. Smith III on July 21, 2013 at 8:00
Got one of the trsde knives,years ago. http://www.iknifecollector.com/photo/cva-trade-knife-kit?context=al...

This is amazing!  I dont think I ever knew about them but now I want a kit!  Thanks so much for sharing this with us