Thought my blog was the most appropriate place to post this.

First let me say that what happened to Cecil the lion was wrong. Bad hunt, sloppy kill, (took 40 hours), idiotic corrupt guides, pompous dumb ass hunter, etc, etc. However, I don't feel that dweeb dentist represents the average hunter, I think he's a disgrace, and not a responsible sportsman in any sense of the word. A responsible sportsman would never have put themselves in that position in the first place, but unfortunately what he did WILL affect the rest of us. I haven't hunted for years, but I'm well aware that hunters do more to support conservation than almost ANY other group of people, and that the general public isn't aware of where conservation funds come from, namely licensing fees paid by hunters/fishers. Hunting is about family, friends and tradition for most folks, and this guy, along with all such greed oriented low self esteem "trophy" hunters just poked us all in the eye with a big stick. Ok, that being said, read what happened to me today.

I was listening to a local AM radio call-in talk show today, and they had a PETA-type person on as an in-studio guest taking calls & talking about that unfortunate lion. Basically the discussion quickly degraded to the point where every single caller, and of course the PETA-person felt that ALL hunting in general was just plain evil and they said so repeatedly. Usually the host tries to get both sides of an issue out there, but today that didn't happen. It turned from the tragedy of an improperly hunted lion to a genuine hatred of all things hunting, and a despising of all hunters. I know the host personally, and have been a guest on his show in the past, so I wanted to call in to "balance" the discussion somewhat. Unfortunately I couldn't get to a phone in time. Instead I posted a message of support for "responsible" hunters on the show's FB page, and you would think I had skinned a kitten and ate it raw in Sunday School or something. For over four hours I've been getting hate responses to my single post. Hunters, (me included of course), are evil, flawed, awful, you name it. I tried to respond with science and facts, but no, they didn't want to hear that. Right now I'm getting hate responses every few minutes, just for trying to inform how hunting/fishing license fees provide such a major portion of conservation income for most states, but the fringe element isn't having any of it. How supposedly intelligent people form opinions based totally on emotion, misinformation and hatred is beyond me. I know what I know because I know the facts, and my opinions are based on those facts. What a sad thing it is that so many actually choose to live their lives in ignorance! Beware hunters, we have now become the prey!

Lansing, Michigan – -(Ammoland.com)-  When word of the discovery of Chronic Wasting Disease (CWD) in a free-ranging deer in Meridian Township, Michigan hit us earlier this year, it struck like a sledge hammer.

Fortunately for Michigan’s efforts to combat the disease, becoming the 23rd state having been faced with the dilemma, means we don’t have to reinvent the wheel.

But, we must continue killing deer to save them.

Those same yearling deer, which we’ve protected through the years in an effort to allow them to grow to maturity, are now on the hit list. Those young bucks tend to travel and that’s the fear; they must be stopped, or the disease will certainly spread. Accordingly, hunters are being called to action by the DNR.

“We have focused our efforts thus far in the area around the first case,” Dr. Steve Schmitt, DNR wildlife veterinarian stated.

”We need individuals who have always hunted in Ingham County and surrounding counties to keep hunting. The DNR can’t fight this disease without their support. Hunters need to have their deer checked and tested so we can determine if this disease is established over a broad area or just persisting in a local pocket.”

If there’s a better solution to the challenge, it’s yet to be discovered.

The Humane Society of the United States (HSUS) hasn’t offered any financial support, even though it’s in a position to help. That’s because its goal is end hunting; to enlist the support of its enemies would be sacrilegious – even if it would mean the survival of a species. Apparently, its desire to fund tens of millions of dollars in offshore hedge funds is more important.

Doing nothing – as the HSUS supports by its inaction on the issue – is doing something. It’s conspicuous, yet predictable response, flies in the face of true conservation, and yes, humane care. Hunters on the other hand will pay to hunt with full knowledge that their contributions in the form of license sales and excise taxes on their necessary equipment will go toward research, testing, and control of the fatal disease.

Hunters are critical to helping the Michigan DNR understand the prevalence and geographic distribution of the disease. Even though hunting has been maligned by a recent episode of a single lion in Zimbabwe, law-abiding hunters are just as outraged by the act – maybe even more so than non-hunters. Ethical hunters hate poachers, too!

So far, a total of 3 CWD-infected deer have been found in the total of 341 tested. It’s going to take millions of dollars to proceed with the well-founded surveillance and response plan to minimize the spread of the dreaded disease.

If hunters don’t step up, who will?

We touched on many of those subjects today in our radio talk, and I certainly agree with you. During commercials the host and I continued talking together, and I told him I agreed with some animal rights advocates as regards treatment of domestic animals, though certainly not with their more radical beliefs. I have been to a slaughterhouse, and toured a Foster Farms poultry processing facility that not only hatched and grew the birds, but then slaughtered and prepared them for sale on the other end. Neither was pretty, not necessarily cruel, but conditions could have been better at both. In the slaughterhouse the holding pens were overcrowded and filthy, and though the animals were cleaned immediately after slaughter I came away thinking they could have been held in a more spacious, cleaner environment. I never saw what I consider to be outright cruelty at either place, but I know things could have been improved. However, I find the morality side of the discussion to be purely a personal, individual thing, and I can't really fault people with objections to hunting on strictly moral grounds. They have their morals, I have mine. It just so happens my morals allow me to agree with hunting, and killing, animals for sport and/or food. I cannot fault those with differing morals. I can only fault them for making false, uneducated statements about hunting without having facts to back up those statements. That's what today's discussion was really about, making informed, educated decisions based on fact, history and reality, not on hate-fueled emotions.

Dead-Left-Knife-Guy, you made the following statement in your comment.

Setting aside the debate of the differences between hunting & hiking, there's just one thing you have to remember about hunting that, on a moral or ethical basis, cannot be overlooked, regardless of statistics:  when you hunt successfully, you are killing something.  Taking its life, removing it from its world.

Not all those that kill think of the gravity of what they do, which is wholly unfortunate.

That is an absolutely true statement.  I do realize when I kill something I am taking its life, removing it from its world.  But I want to expand on that statement.  What the anti-hunting people, with the possible exception of vegetarians, don't realize is that anyone who eats a steak or pork chop or drumstick has also killed something and removed it from its world.  BTW anyone who eats veal has killed a young calf that was never even given a chance to grow up.  The difference between the deer that I eat and the beef or other meat that someone else eats is that I killed it myself instead of hiring someone else to kill it.  And I will admit that I eat beef and other meat that I have hired someone else to kill.  I have not yet gotten a satisfactory explanation from an anti-hunter of why it is wrong for me to kill a deer myself and eat it but not for them to hire someone to kill an animal for them so they can eat it.  The best answer so far that I have gotten from them is, "That's different." or "The cow was raised to be killed."  Why do they think the cow or pig or chicken or any other animal wants to die any more than the deer does?  I wonder how many of them has ever seen what goes on in a slaughter house?  I think that cow or other animal wants to live just as much as the deer does.

A lot of people don't realize that nature is not some Disney Utopia.  Bambi and Thumper don't exist.  Nature is cruel.  Just about every animal will either be a predator that kills or will be torn apart while alive and eaten by the predator.  The game that I kill by shooting will almost certainly have died a more humane death than if had been killed by a predator or died of disease or starvation.  And automobiles kill many animals.  And that BTW is the way the majority of animals die.  Hunters do not kill most of the animals that die.

Thanks Charles. Funny thing, after the show an old hunting buddy from my childhood called the station, left his phone number & asked me to call him. Turns out all of this is leading to a rekindled friendship, I call that a win!

Glad to offer my support Syd.  Hope I was helpful.  You did a very good job.

Thanks to Charles for calling cross country to add his wisdom to my segment on Dave's show today. Thanks so much for the support, and that goes for all of you. All I wanted to do was present some facts and allow the listeners to form their own, informed, opinions. Even after we presented the facts of the matter we were still getting hate responses on the show's FB page. I guess existing in ignorance is ok with some folks.

Thanks again everyone, especially Charles.

Now, let's get back to talking about all things sharp!!

Thank you!  You both made great points did not attack anyone on the other side and gave them the facts. Responsible hunters are a large part of the conservation efforts 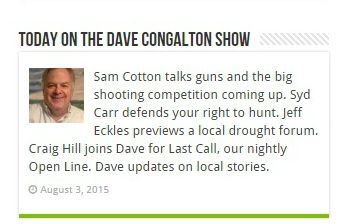 Jan Carter left a comment for Emma Wynn
13 hours ago

Jan Carter left a comment for Emma Wynn
13 hours ago

Jan Carter left a comment for Matt Clark
13 hours ago

Sean morgen left a comment for dead_left_knife_guy
16 hours ago