I was wandering around some of the older discussions recently and I came across one that grabbed my interest. Eight years ago, iKC member Robert Burris started a discussion called “Knife Carry?” and asked the question “What is the difference between a "Sheath"...." Scabbard"... or "Frog?"

Believe it not, this same question is being asked today across knife, gun, bayonet and sword forums alike…so it appears it doesn’t matter the size or length of blade – the question is universal across those who use and collect sharp and pointy things.

The terms themselves are easy to define and the etymology of each is somewhat easy to understand (that’s the origin of the term). Definition and Etymology explain what these items are, and to a degree, their purpose. When you compare the root meanings and etymology of sheath and scabbard – and holster for that matter – you see that a scabbard is also sheath, but a sheath is not also a scabbard. Similarly, a scabbard can be a holster, but a holster is not always a scabbard. That’s because the word sheath and holster is a derivatives of scabbard. If nothing else, that explains why they are so often used interchangeably.

Because we do not go around wearing a sword as part of our fashion wear, or a bayonet as part of our work attire, throgs, hangers, and baldrics are less prevalent in their use and general understanding today outside of the military. Since we do not wear the weapons these accessories support, there’s no application or function for us to reference. The pictures we see of our soldiers today do not have these elements on them as part of their uniform or gear, so they are no longer general knowledge terms. There is no context.

For us knife guys and gals, Tobias’ explanation in that same discussion was simple and bang on – and he expertly answers the original question. Mic drop…done. We can all go home now knowing when a sheath is a sheath and not a scabbard, and that a frog is not a reptile, but a hangy down thingy to hold a scabbard from a belt.

For the rest of us who thrive on useless trivia and want to really understand some differences between the terms and their applications, then I invite you to read on.

In their root meanings, the sheath and the scabbard perform the same function - they serve as a means of encasing and carrying a blade. As stated above, sheath is a derivative of scabbard, so this makes sense.

Likewise the frog and throg – they each serve to attach a scabbard to a belt. Because the purpose of each is so similar in function, they are often used synonymously. Grammatically then, it is acceptable to say sheath or scabbard, or frog or throg and be correct (for the most part). You could have the similar discussion between a dagger and a dirk.

What separates then a sheath from a scabbard and a frog from a throg is its context. As with anything in the world of knives, swords, and bayonets, there can be any number of things that either influence or impact the context – such as military traditions, weapon specifications, marketing, cultural norms, historical influences, etc. Sadly, sometimes the terms are based on what was described by someone else who didn’t know better. This is seen most often on descriptions for military pieces being sold by someone who has not made the effort to research it.

So why is this important? As a sword and bayonet collector, I want as much of the weapon’s ensemble, or kit, as possible. The more complete the kit, the more valuable it becomes – particularly for military items.

For example, obtaining an 1898 Imperial German officer’s sword is great. Getting it with its scabbard is fantastic! Getting the same sword with scabbard and its throg? That’s a rare find. Getting the sword, scabbard, throg, and hangers? OMG! Someone catch me, I’m going to faint!

To help illustrate what this whole discussion is about, here are some pic’s to help us get a visual, and perhaps some context as to what these different elements look like, and their application.

Here is a good example of a sheath. It’s your basic double stitched cowhide leather sheath with an attached belt loop (or integrated frog if you prefer) and cross-over strap and secure snap. It hangs from your belt, and it covers your knife. Sheath designs vary in size and shape, and may include “value-added” elements such as a pocket for a sharpening stone, or extra straps for a variety of carrying options, as seen here: 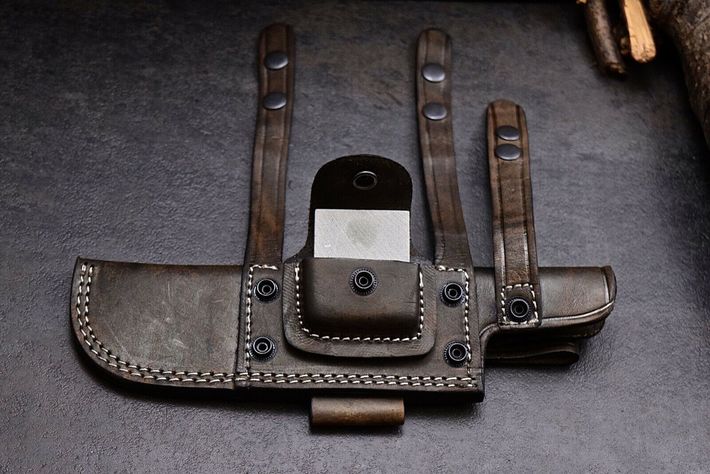 Here’s a slight twist in the discussion – and that’s when a sheath is not a sheath or a scabbard, but a holster, as illustrated by this high-end knife holster by WOOX. 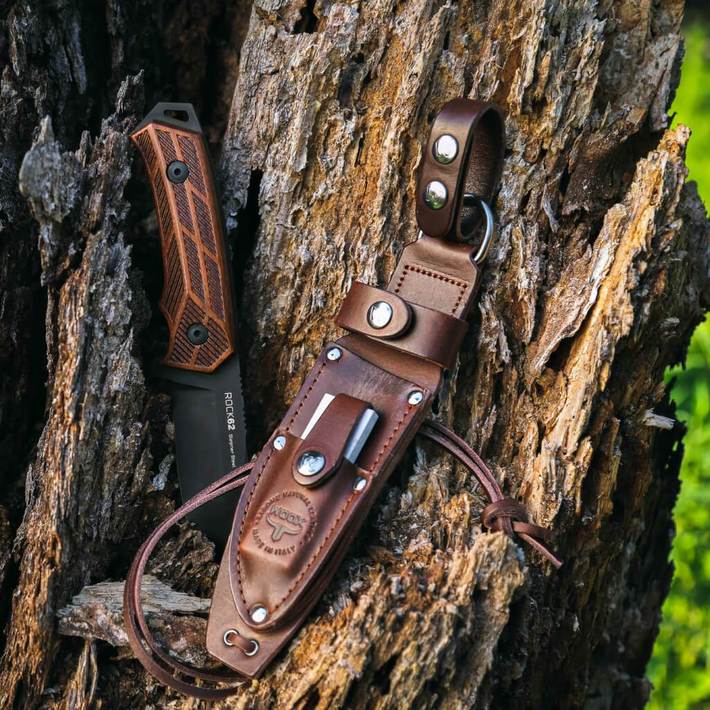 I know, don’t get me started. It just proves the point that market positioning can influence the terminology which adds to the fog. Is this holster also a sheath? Yes. But it has a frog…so doesn’t that make it a scabbard? Yes, but they call it a holster, so let’s move on.

This is a good example of a bayonet scabbard. This one is for the Japanese Arisaka Type 30 bayonet. The scabbard is secured into a frog by means of a strap and buckle system. Notice the strap flange at the throat of the scabbard…that’s where the strap fits through and is buckled to the frog. 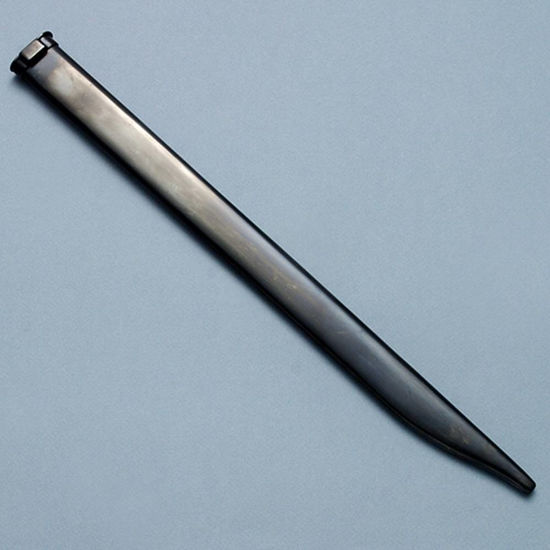 And for Tobias, here is what he mentions in the referenced discussion – an M7 knife-bayonet with the M8A1 scabbard. He makes the point that US bayonet scabbards today are “integrated scabbards”, meaning the frog is permanently attached to the scabbard making it similar to a normal knife sheath.

Nod to you Tobias! 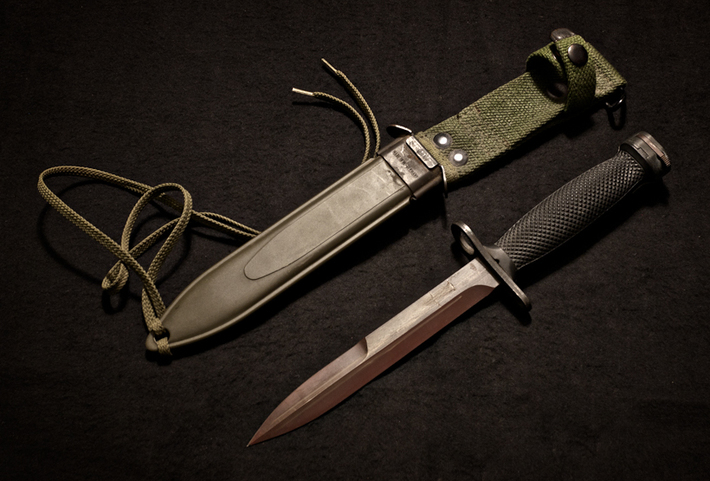 That leads us to the frog – that belt accessory most associated with bayonet scabbards, but also has applications for some knives, daggers and dirks, and swords. This is one of several frog types for the Japanese Arisaka Type 30 scabbard above. Note the strap fitting through the scabbard flange to secure it within the frog.

Next, the throg. Here too it is not exclusively used for swords, but also for some sword bayonets, as seen on this fine and rare Austrian Webern specimen: 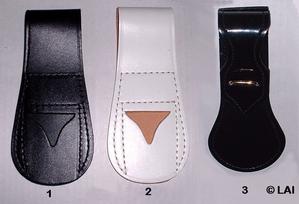 This is a sword belt with the throg attached:

Next we add some hangers. Hangers are chains or straps that connect some sword and dagger scabbards to the throg or frog, which is then attached to the belt.

Here is my 1939 Luftwaffe 2nd model dagger (or dirk as some refer to it), complete with scabbard (not a sheath), original hangers, and original sword knot. This is a pretty good find….the only part missing from this kit is the frog that connects the hangers to the belt. Just to keep things spicy, sword and dagger hanger sets are also referred to as slings, which differ from the sword slings worn over the shoulder.

Putting it all together

Here are two US Army examples of the throg, hangers, and scabbard connected to the belt. Note the hangers connect at the scabbard rings at one end, and on the throg at the other. Photos are from the Marlow White Military Sabers website. 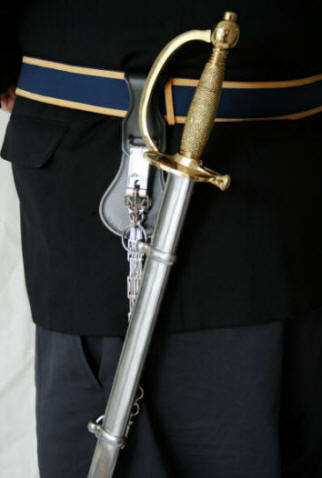 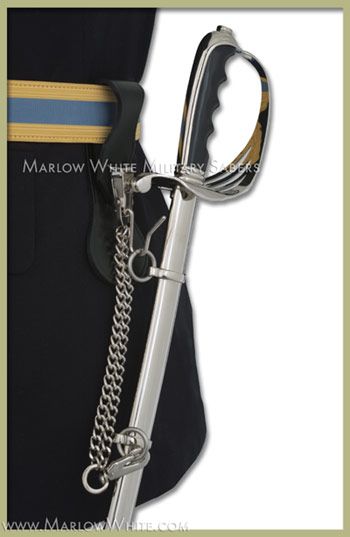 This is the throg for the West Point Cadet sword. Again it looks like a frog, but it’s not…it’s a throg. How do I know? Because that’s what the Army calls it. 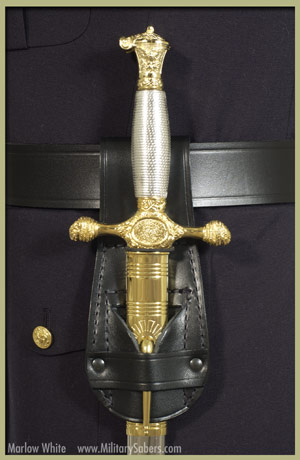 Finally, the belt systems, namely the baldric, sling, and Sam Browne belts. A baldric is a belt for a sword or other piece of equipment, worn over one shoulder and reaching down to the opposite hip. What make it different than a sling? Design, era, and everything that makes a frog different from a throg.

Here are two examples of a typical and simple baldric. These are very popular now with Cosplay, reenactment groups, and theater. 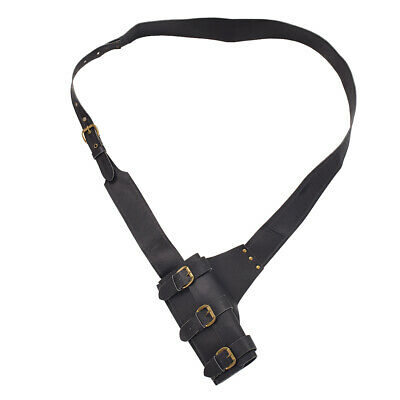 Sword slings, however, are today’s military variety and used for swords and drums. Here are two versions of the US Army webbed sword sling with leather throgs. It too is worn over one shoulder and reaching down to the opposite hip. 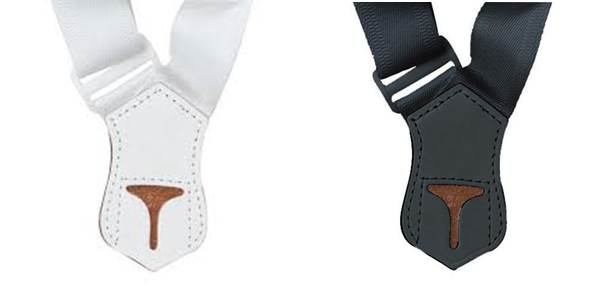 This is a historical British sword sling and throg: Lastly, the Sam Browne belt system with sword hangers and throg. This one pictured is the 1901 British model. I'll just note that the hangers on this example are also known as the sword sling. 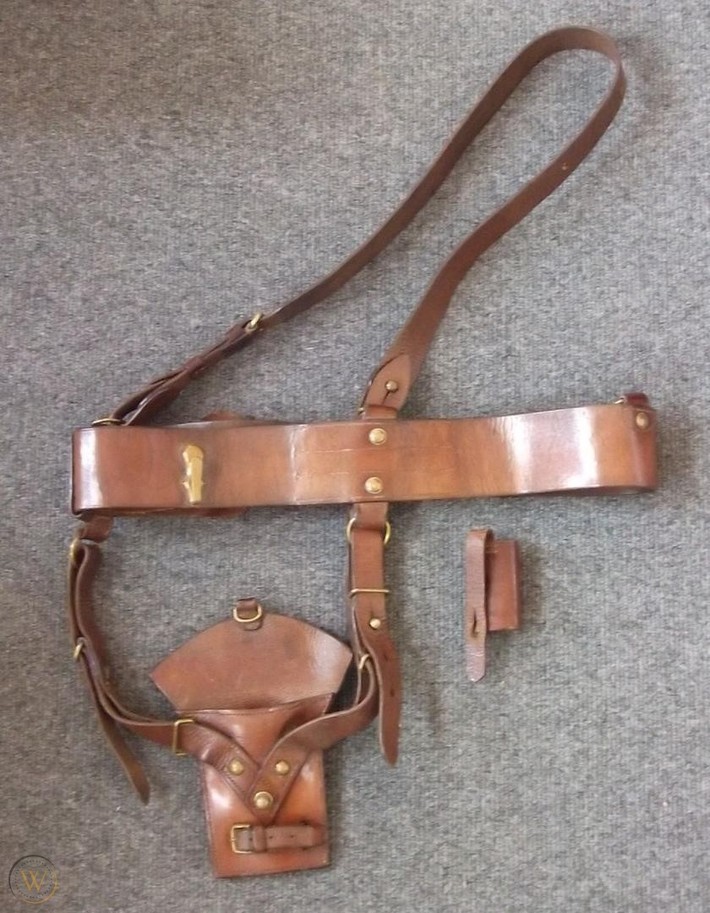 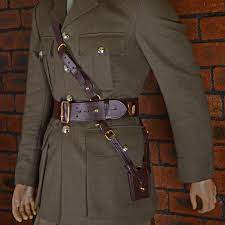 So what have we learned…what’s the take away?

Well, knives have sheaths, but can also have scabbards. Knife sheaths typically have the frog integrated as part of the sheath to attach to a belt, and that some sheaths include additional straps to allow for a variety of carrying positions. Knives can also have scabbards and holsters. Daggers, dirks, and sometimes knives can also be suspended by hangers or a sling, which is then connected to a frog or attached directly to the belt.

Bayonets have scabbards, even if the bayonet is a knife with a muzzle ring. Scabbards have frogs that secure them to a belt…unless it’s a sword bayonet fitted with a throg that looks like a frog. Bayonets can also have a sling, or belt hanger, such as the AK-74 or the Yugo M70 knife bayonet.

As collectors, we love categories and we want everything to fit into it. Suffice it to say that whether you call it a sheath or a scabbard, a frog or a throg, hangers or a sling – you’ll be grammatically correct. Whether or not you will be accurate depends on the context. As we have explored, there is really no hard rule that a knife will always have a sheath, a bayonet will always have a scabbard, or that a sword will always be hung with a throg.

As for me and my collections, I want to be accurate in the nomenclature when I am making a purchase, as this adds value to the piece. But in general terms, I keep it simple in my discussions - all my knives, axes, and bladed tools have a sheath. Machete's....eh, take your pick. All my bayonets have a scabbard, and all my swords have a scabbard. And they all have hangy down thingy’s for my belt.

Lars Ray replied to Lars Ray's discussion CFK / iPAK Knives - for all those who dare! in the group BOX FULL OF KNIVES
11 hours ago

David M is now a member of iKnife Collector
17 hours ago
Welcome Them!

Jan Carter left a comment for Ken Rohe
21 hours ago

Jan Carter left a comment for Anthony Wright
21 hours ago

Jan Carter left a comment for Harvey Lucas
21 hours ago