WHEN IS TOO MANY KNIVES TOO MANY? 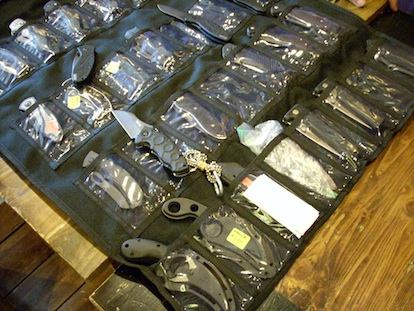 There is a school of thought that says two is one and one is none. I first heard this from the movie G.I. Jane. It may be a movie, but since I seriously got into the knife collecting and survivalist culture I realized that a lot of experts and sources actually advocate this kind of thinking.


Another school of thought that I crossed was that your tactical knife should not be your utility knife. There are two major reasons given for this: a) tactical knives are sometimes near impossible to use in a utility function, and b) utility knives get beat up a lot and tend to be abused, something you don’t want to do to a knife that is designated as the one to save your life.


Now obviously we are talking about urban survival and suburban living here so the other outdoor school of the hunting knife as “the one knife” cannot hold true. If we could all carry around ten inch knives in the city and to work, then we wouldn’t have to worry too much now do we. As I don’t think
anyone can argue that a bowie can serve both as survival and tactical quite easily. Though a secondary back-up smaller survival knife like a Becker Necker or a RAT Izula, sorry ESEE Izula, would be a great idea my frontiersmen friends. Just in case right?


So based on that, how many knives should one carry? Five.


Okay, so that may be too many for some, but please understand that I am not asking you to tote five swords. When I said knives I meant just that, knives. But each of these must be able to back-up the other and perform specific duties and back those up as well.


I am no expert and I did not claim to be. But I am just speaking plainly here. Based on the school of two is one and one is none, and the school of thought that a tactical knife is not a utility knife, five would be the minimum on your person.


Also, it is suggested that your knife must be able to do the following in a pinch: light pry, strike a flint, food prep, do woodwork, cut light wire, turn screws, be used as a spear tip, be used as a hammer.


Since we have five knives, you can spread these needed abilities among them. So, based on the extra requirements, we need the following knives: a flat long fixed blade, an uncoated blade, a straight edge, one that can handle batoning, one that has steel that can cut copper wires, a thin spine, a fat blade, a flat strong handle.


This is where it becomes obvious why hunters use what they carry. One good knife can do all of these.


As an example, here is my TO&E on my person every time I go out. A fixed blade four inch kwaiken in a kydex sheath in my boot by Lucas Burnley in D2 steel, a Spyderco Tenacious with combi-edge, a SAK Classic attached to my single LED AA flashlight with a key ring, a Spyderco Bug in a
small pocket in my cellphone pouch, a S&W Tactical Pen.


To round it out, I also carry a Zippo, and a disposable lighter. In my bag is a basic survival tin, and a multi-tool. To augment, if the security situation allows it, I also carry a Cold Steel Kobun. More on that next time.

Comment by Relly Carpio on September 19, 2010 at 12:45
Okay. Am back from the mini-knife show and I got ribbed for "The Rule of 5" (sigh). Can't please everyone I guess. But then again it was a good mix of new collectors, old collectors, martial artists, and the usual suspects. Thing is, there was only two of us who were scenario heads during the day. Oh well. Maybe next time I could get better feedback.

@Mr. Cole Thanks for the info on Clint Smith, I'll look into that. I love the way you point out that it can seem a bit "nuts" at times. I almost sputtered into my morning coffee with "what CAN I Dooo!"

I look at myself before I leave and feel the steel pulling my pants South and think. "What the hell am I doing? Imma gonna go to jail if I get caught with this!" But out I go the door because I would rather take my chances on talking my way outta jail than being in need of a knife and not having one. Because any situation that needs a knife usually is one that you cannot talk yourself out of. You can't talk a carrot into slicing itself for example.

Now just to reiterate. If your knives are multi-use and can do all the essential tasks I mentioned, then you might not need five. Four would be fine. A fixed blade of any sort usually takes a lot of the essential tasks easy and thus could eliminate the need for one or two. Unless we stick with the "one is none" and then we're back to five. :(

As I said a nights worth of sleep was wasted on this. Sigh.

But seriously sir, get a large fixed blade survival knife and put in in the car, in reach if you ever need to bail out of the vehicle in a jiff. Knock on wood.

Comment by James Cole on September 18, 2010 at 16:49
You guys are all nuts; knife nuts that is.
I think it was Clint Smith that started the "Two is one and one is none" thing in regards to carry guns.
I now feel as though I am lacking, what can I do, what CAN I Dooo! I only carry four knives daily. You guys have shamed me into carrying a fifth knife, but what will it be? And where/how? The other day I rediscovered a couple of Case horizontal carry belt pouches, maybe I can find a Stockman in my collection to put in it.
Ok, no more kidding around. Although I carry two single bladed knives , I like to have a couple with multiple blades as well. This discussion as awakened the fact that I don't have any fixed blade knives in my vehicles, a state of affairs I intend to remedy in the near future. A couple of Rats or Kbars or Izulas should do the trick.
Multiple knives is good, just remember, the weight of 27 knives will slow you down.

Comment by Relly Carpio on September 18, 2010 at 2:19
Truly KG that is impressive! Hmm. I think I'll do a little bit more research then, and maybe write another blog post about it. Now I really have to see what other experts say about this. Thanks so much!

Comment by kage on September 17, 2010 at 16:43
obtw as I was writing the previous comment, it just occurred to me to take count of the blades that I had on me at the time. 1) Cold Steel Recon 1; 2) Benchmade Barrage; 3) Kershaw Nerve; 4) Kershaw Tanto Zing w/ partial serrations; 5) CRKT Wharncliffe Minimalist. So I guess the Rule of 5 holds true. :)

Comment by kage on September 17, 2010 at 16:23
The thing to keep in mind is that knives are task-specific implements. That's why there are so many different blade designs and different blade steels. Sure, all knives can cut, but when you have a specific cutting job that requires certain conditions to be dealt with. You need a knife that will do the job correctly, not just adequately. Carrying several knives of the same design/model is redundant, unless you're in some heavy-duty combat/fighting situation... but in that case firepower would be a much better negotiator. But carrying several knives of various designs/blade steel intended for situation that one knows they are expected to encounter, is only prudent, responsible, and sensible.... Self-reliance through Steel. ;)

Comment by Relly Carpio on September 17, 2010 at 15:28
It does have a nice ring to it Mr. Hanner. The Rule of Five. Hahaha. But as I said I ain't no expert. it's just that me and my knife supplier got into a discussion about it and it kept me up a night just thinking about it because I always felt I carried too many knives, because here one is one too many because its illegal to do so. I cannot imagine myself doing what KG does because I would spend eternity in jail if I was ever caught with nine knives! But oh how I wish I could carry that much steel. I'll see what happens when I discuss it at a mini-swap meet I'm going to this weekend. Maybe some of the boys there gots an idea about it too. I'll post whatever I garner there.

Yeah I know. I need to read more and watch less movies. Hahaha.

Derek left a comment for Lars Ray
18 hours ago

Lars Ray left a comment for Derek
21 hours ago

Lars Ray left a comment for Carlton
22 hours ago