Well my angle cube arrived on Saturday ,or in this case to be more accurate it is a "Bevel Box" same thing as far as I know .

First chance to play with it tonight . First impressions , it's very reassuring to be able to be really accurate with the angles . I think the marks on the Edge Pro are best used as a Guide and of course my stones are now getting a little wear…

How and where do you take a stand?

Some states say they have the right to dictate what you can carry and why, simply because you have chosen to live there.  Now there seems to be a heated discussion about what your allowed to see.  Thats right, pictures of "weapons" such as a SAK knife are no longer your choice to see LOL

Google Adwords has long taken the stand that folks that sell guns cannot advertise with them.  Then it was companies that incorporated the word KNIFE in their business name.  Yes even a site where we…

In Memoriam Dealer to Dealer

It was great to meet the other dealers that are iKC supporters, Frank Powers Franks Classic Knives, Ken Mundhenk Blue Creek Cutlery, deal on the phone with TSA knives Greg Holmes... If there were others there i didnt get to meet them.

but these guys are all salt of the earth and great people.. I just hope one day I can retain what Frank Powers has forgotten about knives. So Dealer to Dealer your in great hands with any iKC supported dealers, because Jan just dont take money for…

In Memoriam Who made who?

That knife you just aquired has a tang stamp that ID 's the maker. Most of us are familier with 95 percent of the manufactuers, but what about new collectors or a stamp that we just havent looked at before?

where do you go to ID a knife ? what is you personal choice of reference?

This may help new and old collectors alike.

I am and have been involved with a lot of knife clubs, not one of them has brought the pleasure and fun that iKC has

the clubs always end up the  same, fewer people show, except to get the club knife. Lots of disagreements

arguments, etc,,, Hard feelings over chosen or not chosen ideas. iKC is a fresh exciting idea cultivated by a group in a knife club that just happens to be online. The perspective here is open, friendly and never dull!

So, i try to expose all my…

In Memoriam How many Knife shows do you attend a year , and how far do you travel to get there? 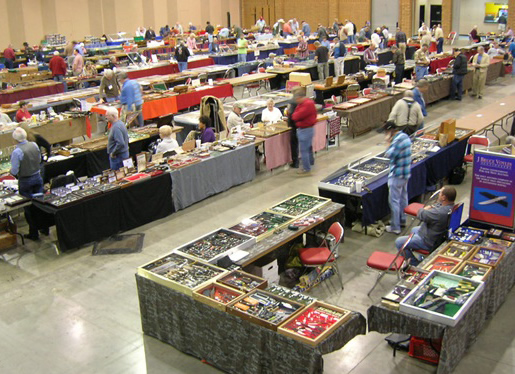 I was thinking how tough it would  be to give up the use of a knife or reading about them, for even one day, I got the shakes just thinking about it. Maybe if I develop a 10 step program, I will be able to bring my addiction under control. I need those who are not suffering too bad ( yet ) to make suggestions as to what those 10 steps might be.

I take no responsibility for what may occur to others who choose to follow  the suggestions for a KAA program. And, I do…

While We are Away...The Knives will Play!

Recently, I had the opportunity to chat with my friend Michael from www.droppointhunter.com The sentiment expressed in his email was just so true to the heart of all of us who are true users,collectors or creators of knives. I will send your responses to him or you can leave comments on his website.

Enough from me here is his email:

I had never heard of this man and find it amazing that with as many knives as he sold there are only a few around.  That must mean they were used, not collected.  If he could only see them now!

The ten commandments for knife collectors

First off, Iv'e been a minister for many years.Saying that, this is my spin on the ten commandments in regards to knife collectors. It is meant to be read in a lighthearted manner.....so here we go.

2. Don't carve any graven images to God with that 'ole whittler.

3. Don't cuss with God's name when you slice your finger open with that vintage Queen folder.

A customer came into the store today and noticed my knife. He asked if he could look at it and loved how sharp it was. He then pulled out his pocket knife and let me look at it. The second he handed it to me he said "it's dull, I know, but I have never been able to sharpen a knife."
He saw my stone on the desk and asked me if I could put an edge on it for him.
I'm nothing special, never said I was, but how can someone who carries a knife not learn to use a sharpening tool?
I put… Continue

We had a discussion earlier about sharpeners and which ones we used most. I would like to address these little (or not so little) tools that seem to fall to the wayside when it comes to knife collecting.

The knife in your sheath or pocket is only as good as the stone you use to sharpen it with. Everybody knows that a dull knife just wont get the job done, so, I want to talk just a little about my stone that i like most.

What have auctions done for our hobby?

When Donnie started collecting you had to go to a knife show or travel to a dealer.  Your local hardware usually only carried a few patterns from one maybe two makers.  Of course as he became an adult, the area around Gatlinburg always had somewhere you could go see numerous brands and being from the South he went there as often as possible.

When I became interested, we had a few dealers that were online.  They would tell you what they had and if you were interested, they would email…

I am so very pleased to announce a selection for the 2012 iKnife Collector knife. Our selection is:

From GEC a Whittler, specifically #570312 Northfield UN-X-LD, jigged Pioneer bone. The blade is 1095 Carbon Steel. The knife will include the traditional Wharncliffe (cut swedge), Pen and Coping blades(inside cut swedges) that are polished. The main blade will have the Northfield Tang Stamp. Bolsters on the knife will be Lined and /Dimpled.

The Shield will be our iKC shield used…

Check out the following youtube posting on these beautiful pieces from Hattori.  sorry for the low resolution as these set of videos were taken by a phone.

Lars Ray left a comment for Derek
7 hours ago

Lars Ray left a comment for Carlton
9 hours ago