This is something I've wondered about for some time. When a knife is finished, why is it that some of the pins are buffed down flat to match the contours of the handle, while some are not? In the picture below, I understand that the 2 end pins and the top center pin are holding the bone to the liner while the bottom pin is the pivot for the backspring and put in after the liners are assembled, but if it is buffed flat, why not the others for a better looking finish? I understand why it's not done on a jigged or stag handled knife. 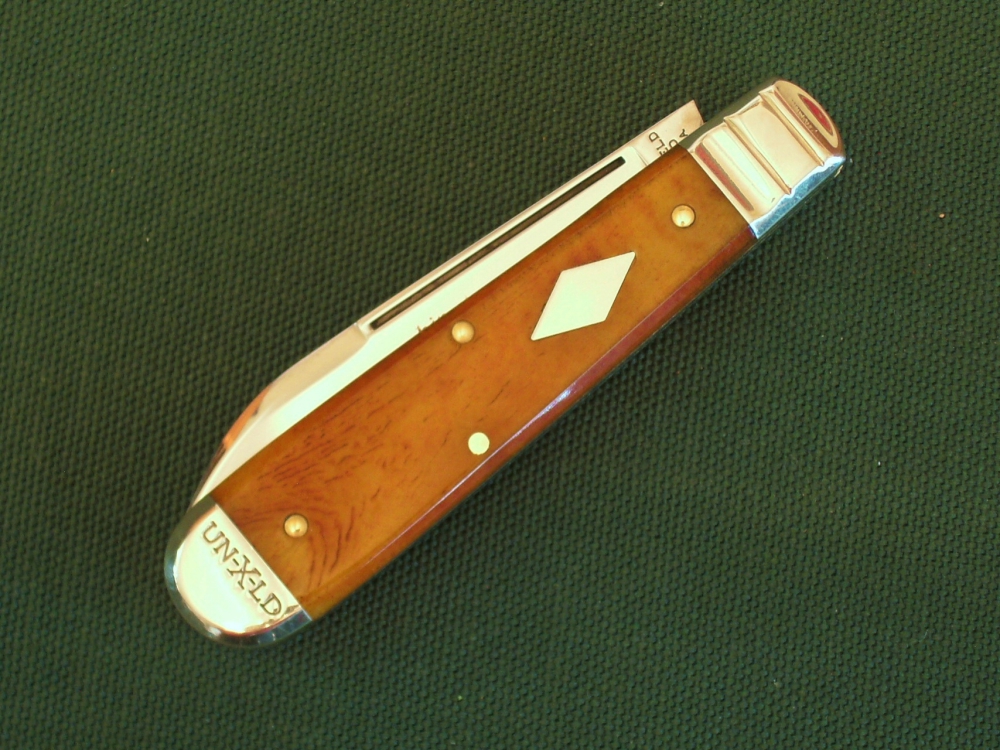 I did once read something about the "pin question" . One of the other forums , the one I have stopped looking at , has a discussion every other week about this . It is a blind spot with me as to whether the pins are flush or sunk , some folk get upset about it but it is one of those questions that just passes me by .

Anyway I read about this but have forgotten all about it , sorry Doug .

Thanks for compliment on the Washington Jack...I agree, GEC made a beautiful knife with that design.

I don't "hate" the way the pins are sunk, I just can't figure out why they aren't done all the same on a flat handle. A bare end knife like a barlow, will generally have 2 pins finished flush and to me, that makes it look....unfinished.  I love barlows...no hate mail please...but as for one of my pet hates...factory blade etches that are light or inconsistent is sharpness...that irritates the heck out of me. If you are going to etch a blade, make it dark and sharp so old eyes like mine don't have to get out the bifocals to see what it is, and so you don't have to turn it 5 ways from Sunday to get a picture of it. GRRRRRRRRRRRR

I am with you on blade etches Doug at least on knives , there are some great ones on razors with gold and blueing etc.

I wasn't trying to say that you had a hatred for sunk pins more that some of the forums get rather excited about the subject .I guess there is a reason for the different way they are finished and I figure someone on here will know the reason .

Doug-This is a little bit out of my wheelhouse, but I will give you my best guess- In many cases it may be purely aesthetics, but a crowned pin with a mushroom head will have better holding power (like a nail or screw head) than a straight pin.With today's glues and epoxies, that is probably superfluous, but still an advantageous backup.Obviously, applying a glue on any type of a pivot pin would adhere to the blade and prevent movement, so not used.On a well executed knife, however, a raised pin can be quite beautiful.

OK, so I thought I would ask one of our resident experts because as John says, this is out of my wheelhouse.

Tony Bose says it is a makers choice.  He makes sure that on any given knife his pins match.  On stag or jigged, you will see the dome tops, known as spun heads.  On a flat surface be it bone or wood he prefers the flat pins.

So, I am guessing that GEC did this to add to the aesthetics of the knife, in their eyes.  It certainly does give it more dimension.

You are a lot more informed about knives than I am, but I have a feeling that the pins that just hold the scales to the liner are machine pressed and they simply don't go the extra step. The finished pins seem to be the back spring pin/pins, that are done in the final assembly.  I agree with Tony, all or none, just looks better to my eye. I'm certainly not going to quit buying knives where the pins aren't all the same, it's just something I've noticed and have wondered about. It really came to my attention while putting my white bone collection in the the display case. Herman had finished every knife with all flat pins, and quite a chore I understand as that White Bone is fairly brittle and prone to chip. The final buffing also highlights any little chips around the pins, and several of the knives had to be re-handled more than once before he was satisfied.

OK, so I thought I would ask one of our resident experts because as John says, this is out of my wheelhouse.

Tony Bose says it is a makers choice.  He makes sure that on any given knife his pins match.  On stag or jigged, you will see the dome tops, known as spun heads.  On a flat surface be it bone or wood he prefers the flat pins.

So, I am guessing that GEC did this to add to the aesthetics of the knife, in their eyes.  It certainly does give it more dimension.

This is the explanation given by one of the larger GEC dealers: "This is something I have seen on cover pins for many years and I couldn't figure it out for a long time. When I put my own covers (slabs) on I just cut the pins from bar stock and flattened the back side and then cut the cover side close to the surface and spun it down. But think about how time consuming that would be for a factory trying to put out enough knives to actually be profitable (at minimum wage, I usually had $500 in my knives before I could stand to look at them - then they were $20 knives). Wouldn't it make much more sense to have pre-cut cover pins that were already flattened on the back (liner side) that you could just drop in thru the liner and then spin on the cover side wherever they came to? Sure it would. So all the cover pins are pre-cut to the same length, thus on thicker slabs (or even thicker parts of the slab) they are deeper sunk. But they actually weren't countersunk, they were just spun on the end regardless of where the end came to. But if you look at the slabs from the side, the cover pins all come to the same height - which makes different slab thicknesses have different pin depths. But it makes a guessing game and 5 minutes work of cutting the pins and flattening, into a 2 second job of pulling them out of the tub and dropping them in place. They could custom cut them and add 5 minutes labor back into the knife price, but there is no gain in functionality or structural integrity."

Some knife and cover combinations will not have those sunk pins.  For example, their latest run of 77 barlows with sawcut bone covers had pretty much all domed pins.  Their F&F knives don't usually have cover pins, so you can avoid that issue altogether.  Surprisingly, their acrylic covers almost always have sunk pins.  I would have thought that those would be the easiest to get to the exact thickness needed to flush up the pins.

I am one of the people that John mentioned when he said that we get upset about it.  Some covers, like the pioneer bone or stage it doesn't bother me much.  With others like smooth bone, especially on a fancier knife like that Washington Jack, it really bothers me.  In my experience, when I carry a knife with sunk pins in my pocket those little holes collect all manner of gunk.  This causes the pins to tarnish and turn green.  I don't mind it too much if it's on a more rustic looking knife, but on something like that Washington Jack it looks terrible in my opinion.  I've had GECs where those little holes would actually collect lint.  I've seen pictures where the pins were so sunk that somebody was able to get enough of the stem in there to make a little flower stand up out of the side of his knife!

One of the things I like most about my knives is that they look sharp when I pull one out to use it. (no pun intended)  When I pull out my knife and have a ball of lint sticking out of a hole in the side of it, or it just looks gunked up and sloppy there's a bit less pride in ownership.  Especially when I know that the only reason it's an issue is because the factory is taking shortcuts.  Don't get me wrong, GEC makes a great knife and I carry one just about every day.  However, I've become more discerning in my selections when I'm purchasing new GECs.  I won't buy any more with sunk pins like that because I know that it's going to bother me.

I went and found that picture of the flower sticking out of the side of somebody's knife:

I understand the frustration with pocket lint getting in sunken pins.  I also tend to be displeased with then because at some point the edges of the handle around the pin will grab at the pockets.  Pins that are flush make take a bit more time but they give a better look, feel and as you said pride to the owner of the knife

Here's a video where you can see how they rivet the ebony covers onto a #15 boy's knife.  It doesn't exactly jive with the quote I posted earlier.  I don't know if the dealer was mistaken or if they changed their methods after he wrote that.  In the video the covers are countersunk and the pin is placed in from the top.  It's hard to see exactly how the machine is working, but it appears that the tops of the pins are already flattened out and the piece that she places the scale over spreads that backside of the pin inside of the liner.  They grind it flush with the liner at a later stage.  The main point is that all of the pins are precut and sitting in a tin.  They don't adjust the length of the pin to fit the cover that they're attaching.  They're doing the riveting starting at the 2:40 mark.

Here's another video.  At the 21:57 mark you can see the tins full of pins that are all precut.

This method of having the pins all precut to a generic length is why we end up with sunken pins.  Many flaws in knives that I receive are easily fixed.  Sunk pins are not easy for me to fix.  It's not the end of the world, but like I posted yesterday it's frustrating because I know that they're not trying on this issue.  If I get a Queen or a Case with a sunk pin I can accept that it happens now and again.  When I know that they go in with the intention of having sunk pins it's a little tougher to swallow.

Jan Carter left a comment for AKcowgirl
27 minutes ago

Jan Carter left a comment for Russell Thorp
27 minutes ago

Ken Mundhenk left a comment for Dan Lago
15 hours ago