First of all, I do not hunt…I barbecue, and for me, there is nothing better for preparing meat for the smoker or grill than with a good skinning knife or Bowie. Oh sure kitchen cutlery is designed for such chores, but a good hunting or skinning knife has meat in its DNA. They’re not designed to chop veggies, there are forged to hunt and dress game! So I’m always looking for a good and relatively inexpensive skinning knife to use in preparing ribs, parting chicken, dressing duck or turkey, and of course, removing bones and shoulder blades from lamb or pork roasts for sausage making.

I selected this Mossberg because it fills a niche in my collection of knives from firearm manufacturers and the price was right….$8.49 plus five or so bucks for shipping. At the time I placed the order, I had no idea if this knife would be any good or not, but for $13.00+ dollars, I didn't care; it could sit in my collection for a real long time.

As I stated, I purchased this knife mostly to fill a collection category niche – knives by firearm manufacturers. For the money I spent, I never really took anything about it seriously. On the surface, it has all the hallmarks of reasons NOT to spend your money on it  - it’s crazy inexpensive when compared to other skinning knives in its class, it’s made in China under license by MEYERCO while the firearms are not, it’s blister packed, and everything about it screams “disposable rather than sharpen for further use”.

When I received it, however, I immediately discovered I underestimated this knife, and those that manufactured it. The blister pack was well done and firmly represents the pride of Mossberg. 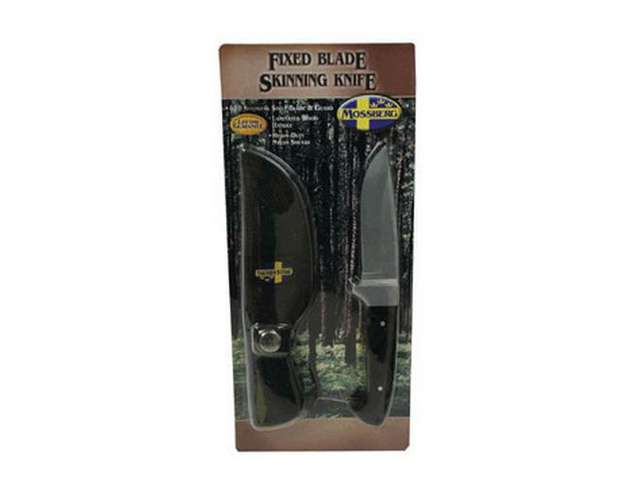 Fresh out of the blister pack, this little hummer is sharp! I’m not into shaving my arm hair, but it cut a piece of paper without thinking about it. Now my interest is peaked. “Could this be my next great BBQ knife?” I ask myself. Oh yea!

As a habit, I typically take my knife at this point and run it across a honing rod a couple of times before I de-bone the thighs. I intentionally bypassed this step to see how this knife would perform. To my absolute delight, it cleaned the meat off all sixteen without once needing a honing.

After all the meat work was completed and I cleaned the knife, I decided to hone it with my ceramic honing rod. Beautiful – as sharp as when it came out of the blister pack! The nice straight edge with the gentle up sweep makes it easy to hone and keep sharp.

While the chicken sausage project may seem like a simple first test, it is tedious work. From a comfort standpoint, I could have worked with this knife all day. At eight ounces it’s light to hold, but heavy enough to cut through chicken joints easy enough. It is also easy to grasp in several different ways for control of the cut. The scale contours fit comfortably in my hand, and most importantly, there is no distinction of feeling between the scales and the pins, the tang, or where the scales meet the finger guard. Nothing irritates me more than when you can feel the transition between integrated handle components!

The balance point on this knife is right where the scales meet the finger guard, so it's a little handle heavy, but not uncomfortably so.

I have in my collector’s notes that the Mossberg model 9899 was fashioned after the Charles Sauer MKSTK skinning knife; I just don’t recall where I got that info from. But as it too is manufactured by MEYERCO under license, it sort of makes sense. They are indeed similar in design.

“Simplistic” is the word that comes to my mind when trying to describe its design. It’s certainly not revolutionary, or unusual. It’s not even “sexy” as knives go. It’s just straight, simple, and no-nonsense. I wouldn't mind seeing this come out in some exotic woods, bone, or horn though!

The nylon wrap-style sheath is pretty decently made, and includes a snap strap to retain the knife in place. Easy enough to have a custom sheath made for it should you want to make a small investment in your piece. 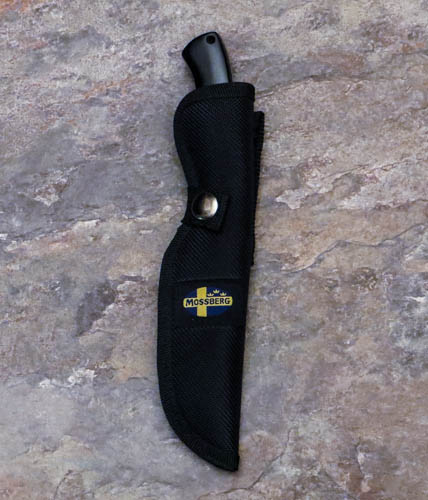 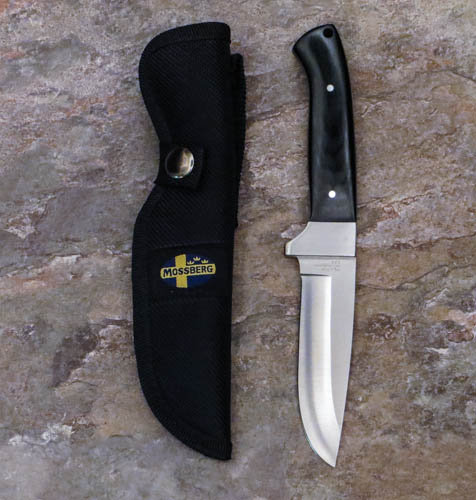 This is not a knife I plan to whack down a sapling with, use with a baton, or pin a bear’s ear to a tree with. But at eight ounces, I do not have to think twice about carrying this as a supplemental knife while backpacking. Oh for sure I will!

Besides preparing the chicken for fresh sausage, I used this puppy to carefully remove the membrane from racks of ribs – both beef and pork. While that’s just the task I would expect a good skinning knife to perform, I wasn't sure how this one would do. Again, I was wonderfully surprised at how well I was able to control it. The edge curve leading up to the point is perfect for this task.

Similarly, removing shank and blade bones from pork roasts and lamb could not have been easier with a knife costing $50.00 or more.

If there may be additional performance tests you would like to see this knife perform, let me know and I'll see what I can do. Just remember, it's a skinning knife. It's not designed to split wood, pierce sheets of plywood, torgue anything, or carve a path through the jungle. Think game prep or minor camp chores. 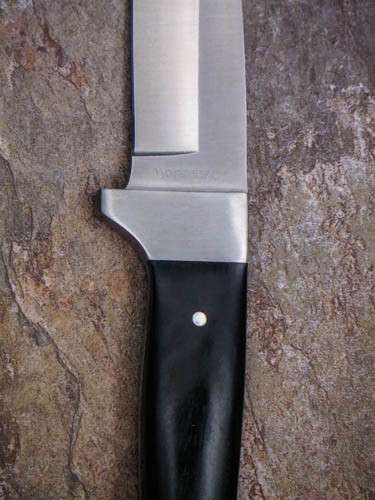 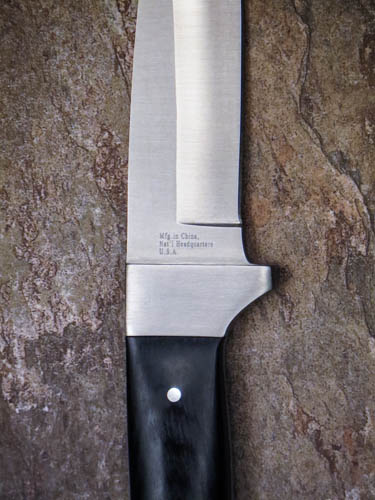 It’s ten bucks, what do you want me to say? Actually, for the money I spent, I really did underestimate this knife. I pre-judged its capabilities, performance, and overall quality based on its price point alone. I am delighted to report that I was wrong in my initial estimation of this knife.

I defined other knives in its class as being fixed blade skinners similar in overall size, design, materials, design purpose, and under $35.00. These include:

The prices of these examples will vary depending on where you purchase from. All of these can also be found on Ebay.

As with any knife, you should know why you purchase the one you want, and know how you plan to use it. I am optimistic that with the reputations of both Mossberg and MEYERCO at stake, receiving a MSG9899 that does not live up to this review would be an exception and not the rule. However, there is always the chance I was the lucky one who received a really good $10.00 knife!

As I stated, I purchased this knife to add to my collection first and foremost, and if it turned out to be pretty good I would actually use it with my BBQ. I am delighted to say that I have upgraded this knife to be my primary go-to meat knife, and I am in the process of purchasing a second one. We’ll see if it is as good as my first one.

I have no problem recommending this knife to friends. If you’re a hunter, you’ll need to assess your skills and needs to best determine if this knife is right for you. It is certainly worthy as a “First Knife” for any young hunter, or as a gift. Would I take it hunting? Probably not over another trusted piece I might already have, but I have no problem taking it as backpacking knife.

If you’re a fellow pit master or want an inexpensive meat/boning knife for the kitchen, then this is certainly a knife I would point you to for consideration.

And lastly, its $10 bucks….it’s disposable! You blow more than that at Starbucks!

Not me, I don't go to starbucks, however thanks for the great review.

Its nice to know that someone else uses different knives in the kitchen.

Excellent review Lars. I greatly appreciate the effort and also know that there is a well priced alternative out there that you can still use.  Its so important to understand ALL the knives out there. I am more of a user with a collector thrown in so I look for lots of different types of knives . I am much more interested in function than flash.  Blister Packs don't scare me! Quality is avaiable in lots of places.

Great review Lars ,looks like you have got a winner there . For $10 wow I pay more than that for shipping as a rule .

Thanks for all the comments everyone - I very much appreciate it. I spent quite a bit of time reviewing the Sharper Review discussions on review formats to make them all consistent - it appears that we still don't have conclusion on that dialog, so I took the best from the ideas offered up so far and modified for how I actually use the knife.

Feel free to offer up any suggestions as to additional (practical) tests that you would like to see for a skinning knife - short of actually skinning a rabbit or a wildebeest. I'll see if I can't contract Turtle Man of one of the Swamp People to do the extra field testing for us!  LoL!