I recently came across a Dog Tag Knife that intrigued me. It’s diminutive size was actually one of the attracting features. Simplicity was another. The possibility of good blade steel was a plus. A price of <$10.oo cinched it. I ordered one.

It arrived sharp ..but.. I got it sharper.

The ease of disassembly enhanced that process. 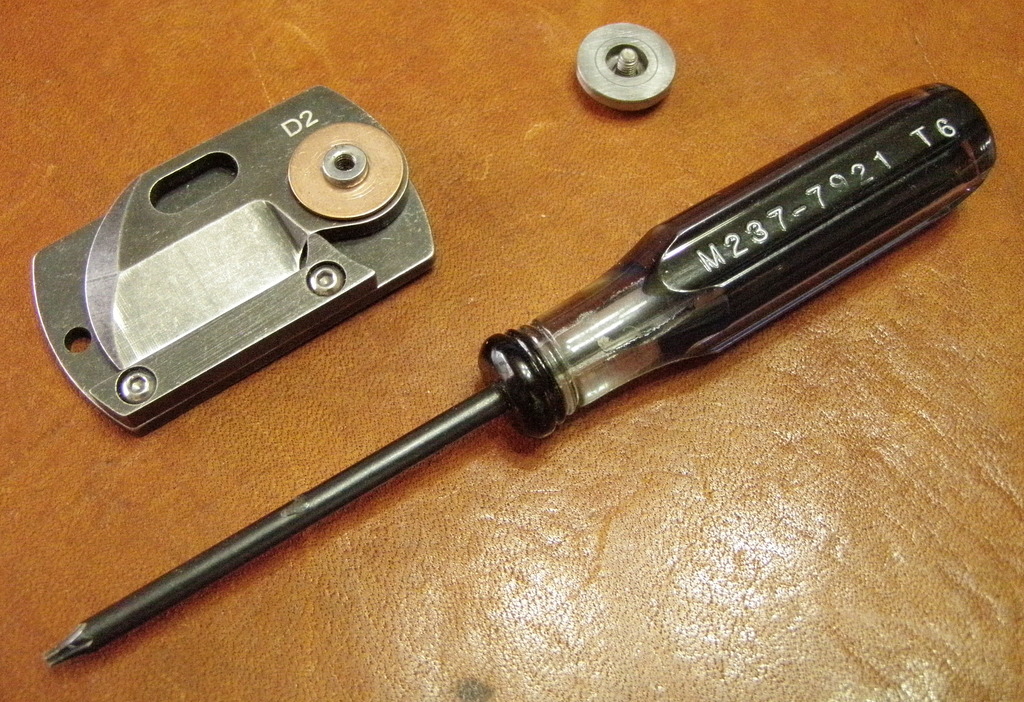 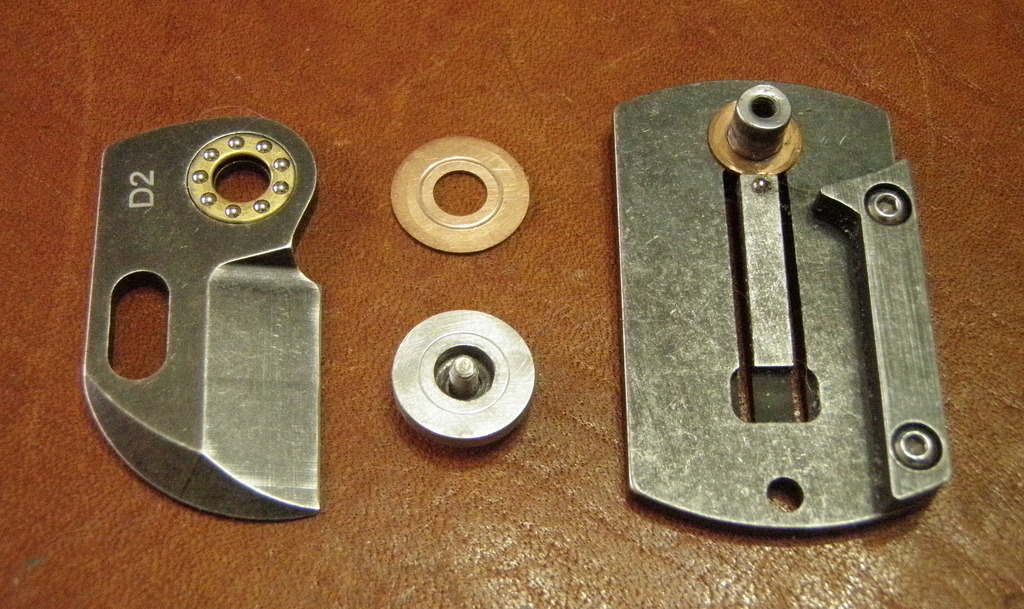 Its diminutive size allows pocket carry .. in the watch pocket of my jeans. Very convenient.

It would also reside quite nicely on a keychain. 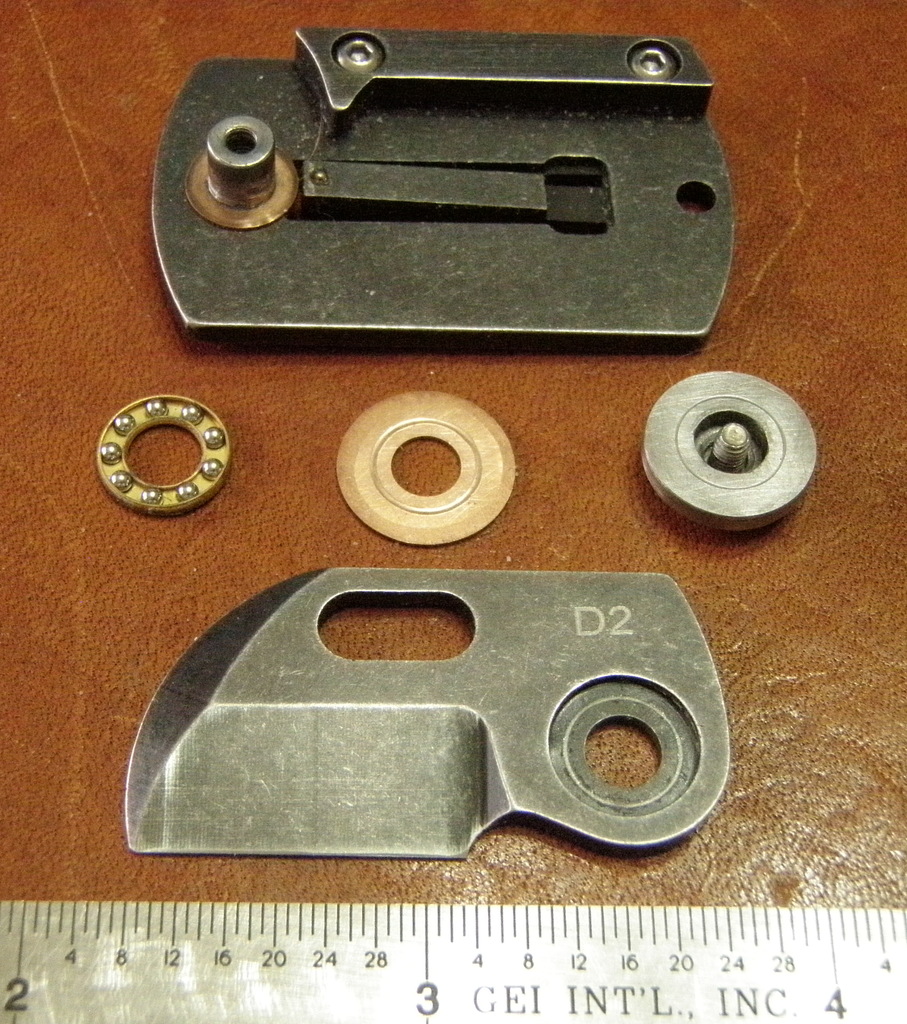 The blade does not lock ..however.. it is held quite firmly in place with the framelock’s detent ball. 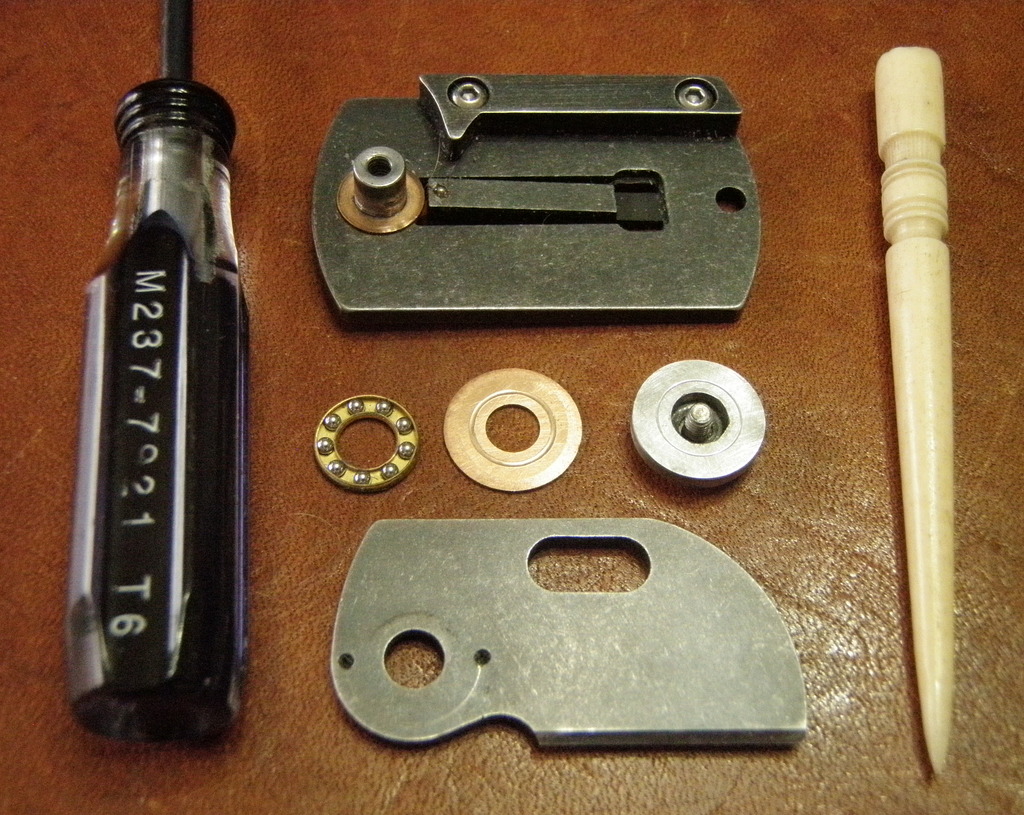 I’ve found .. it’s like carrying around a single edge razor blade .. with an enclosing handle. Rather nice.

Its construction is .. simple & sturdy. The blade steel is good. The ease of disassembly .. a plus.

The downside. The domed washer is mild steel ..&.. was in direct contact with the thrust bearing. The thrust bearing immediately cut a groove in the mild steel & was the source of a “rough” opening & closing. Just like the feeling when a bearing starts going bad. The resultant “drag” forces caused the pivot screw to turn & loosen itself in short order. It's not that visible now because I resurfaced the domed washer ..but.. there was a deep groove cut into the washer apparent upon initial disassembly.

Most would likely find this knife too small to be useful. I ..however.. draw an analogy with a single edge razor blade .. it’s really nice having access to one ALL the time. And .. it fits in my watch pocket.

Actually having this (modified as you did), on my key chain would be great !  I can see many uses, the best of these, opening boxes.  I am always amazed at the amount of items we get in boxes.  Food, plant seeds, medications.  All of these could ship for less in manila envelopes with no damage to the product, yet they come to us in boxes taped with something from the third planet of Pluto that cannot possible be taken off, it has to be cut.

Opening boxes is what I had in mind too when I first saw it, Jan.

It's proven its value there. Again, I've found it akin to having access to a single edge razor blade ..minus the fragility of a thin razor blade.

Packaging .. don't even get me started.

And your reference to tape from the far side of the galaxy is profoundly accurate. Where exactly do they get that schtuff ? I'd like to purchase some. I could wrap the handle of my machete with it & never have a problem again .. no matter what abuse the knife underwent.

There's a model being marketed in the $ 3~6 range. The blade steel is simply specified as "steel" & no rating of hardness is even mentioned. !!! Beware !!!

I choose the vendor that had the wherewithall to include pics of the thrust bearing. I pd $ 9.46 .. that vendor currently lists it as "Out of Stock". I would expect all w/ the D2 etch & same blade grind to be the same.

There's subtle differences in the blade grind between most models.

Without the addition of the 1/2" oilite washer .. you'll be forever tightening the pivot screw.

SMKW is marketing Spyderco's models .. CPM S30V blade steel (temper not listed) & titanium frame. It would stand to reason .. their stated blade length of 1.25" is measured from the pivot pt to the tip of the blade. I noted their low cost model is not a true framelock. Spyderco's are made in Taiwan & slightly higher priced.

Again, JJ .. I do recommend the knife. Keep your wits about you when ordering.

Had one of these on my watch list, for a while now. Thanks for the review.

... and I finally located a hardness spec for Spyderco's model.

Strangly enough .. Spyderco does not list this spec on their site .. that I could find.

It appears the models using 9cr18MoV blade steel do not have thrust bearings.

funny, such a small knife and fairly simple build, with so many different variables

Some of the "fun" of purchasing sight unseen direct from China. One REALLY has to read the fine print.

Buying knives .. I've not been cheated. *

A few occasions .. I've been disappointed.

When I went back & reread the original sales listing .. I'd received what they stated.

I've learned to pay attn when reviewing the listing.

Re: Knives. Very good quality can be had ..as can.. very poor quality. Scrutinize the sales pics. Read EVERY word of the listing. Keep you wits about you. There exist very few listings for traditional slipjoints. As expected .. the prices are great.

I just accept a ..realistically.. no warranty policy. i.e. I'm not going to return it to China .. really. And .. go into it knowing that. Prices vary ..so.. I compare. Then .. I get a single unit for evaluation.

I've experienced very consistent quality. If I find a unit that I consider good quality for the $ .. I'm inclined to purchase more of the same for friends & family. When I receive one that's bad .. I check the orig sales listing & write it off to experience. Note: most knife purchases are in the $ 10 ~ 40 range .. $20 being nominal.

Would you believe .. it all started because autos were so hard to acquire for the longest time ..but.. not direct from China.

* I no longer purchase ANY electronics.

funny, such a small knife and fairly simple build, with so many different variables

Jon Johnson is now a member of iKnife Collector
22 hours ago
Welcome Them!