The Ka-Bar fighting knife was originally designed as a hunting knife in 1898, and would have been considered unremarkable at that time. In 1942, soon after the United States' entry into World War II, American troops experienced the problematic nature of the M1917/1918 and Mark I trench knives that they were issued initially and, realizing the need for knives suited to trench warfare, Ka-Bar's design was chosen from a catalog of hunting gear. The Marines bought many different knives and designs from a large number of suppliers during World War II, but it was the Ka-Bar fighting knife that was most common and popular. It was chosen for continued purchase and issue after the war was over. The final shape was decided upon by the Marine Corps. The changes included a slightly longer blade for combat use, introduction of a small fuller to make the blade lighter, and the pinned pommel and stacked leather handle as standard. In addition, the blade, guard, and pommel were all finished in a non-reflective matte black or gray phosphate finish instead of the brightly polished steel of the original.

Millions were made during World War II by Ka-Bar, Ontario Knife Company, Camillus Cutlery, Case Knives, and several other knife companies. The knife is inexpensive, easy to replace, and adequate for most tasks. It was also used as a diving knife in World War II, though the model in use at the time disintegrated rapidly in saltwater. The various forms of this knife are still very popular with hunters, fishermen, hikers, outdoors-men, and the U.S. military.

Need a little help from the experts.

What Types and or How Many Ka-Bar Knives Do You Have???

USPS/ having trouble getting my knives,just me?

You need to be a member of Ka-Bar Fan Club to add comments!

I need info about purina kutmaster knives PLEASE..  Thank you!

Guess I should have posted at least one KA-BAR with my earlier comment. 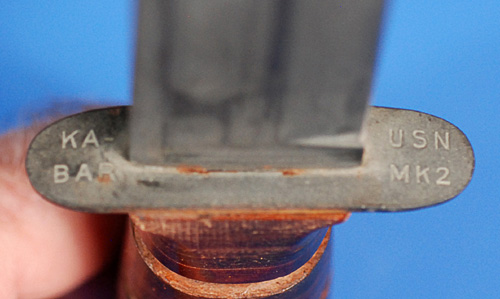 I love the KA-BAR branded knives of the WWII era. The Mark 2 knife pattern is arguably the most highly recognized knife silhouette to come out of the War. Even though it was also manufactured by others, it is still most commonly known as the KA-BAR. Great knife and marketing!

I'm sure it can. In fact it can probably be fully restored. All it takes is money! I used to know a man in Kentucky, Mr. A.H. Purvis. Good man and reasonable, if he can't handle it, I'm sure he will know someone who can.Or you can always just do an online search.

Featured Comment by David Fenn on July 12, 2015 at 15:42
Unfortunately the mechanism is no longer working. The blade is in great condition. Anyone have any idea where/if something like this can be repaired

It's a 2179L GRIZZLY! If it says KA-BAR it was made after 1923, but almost certainly Pre - WWII. Probably in the 30s .To be sure I'd need to see the tang stamp (s) does it still work? If you don't understand what I mean by that, it was originally a SwitchBlade. Looks a little beat up, but all things considered, not to bad.Still a Great piece.I'm not sure about current values,but if working & no chips, splits, dents or damage it would probably be worth between Five or Ten Thousand Bucks!

Featured Comment by David Fenn on July 12, 2015 at 14:10
Hello there kabar lovers. I have recently rediscovered an old folding knife I believe belonged to my grandfather. I found it yesterday and took a closer look since I have started collecting knives.

To my delight, when I opened the blade I sat the Ka-bar stamp! However, there aren't any more markings to speak of. I was hoping someone might have some insight for me. Trying to figure out when it was made etc. thanks!

Comment by Doug Garnes on December 9, 2014 at 9:49
Thanks for letting me in this group and becoming member of the site

Comment by John w schmidt on October 23, 2014 at 5:37
Anyone know exactly how rare a red spacer,USMC,round tang,with original 9 rivet sheath is?

DONALD CARR is now a member of iKnife Collector
yesterday
Welcome Them!