This group has grown into an encyclopedia of knife information.  Feel free to read, use and add!  Enjoy

This group is still a work in process.

Some great Research and my thanks to the tireless work done by Sue OldsWidow. Check out that index, you just may be there for days! Also her research turned up an old resource that is worth revisiting if you have not seen.

Produced by iKC Member Tobais Gibson its a good reference for collectors: http://apg2k.hegewisch.net/index.html

I could not have said this better myself Mr Hanner!

You need to be a member of Research & Resources to add comments!

Thank you John! I'm still blaming the proxy :-) That image perspective looks a bit odd. squished but that's ok. I'll figure out access and learn the site soon enough, and that might be enough to help others to help me identify the origin of the knife.

I told my son about this specific knife it on Saturday, he's in Michigan, I'm in Virginia now. He was born in South Africa, and when I told him I am researching and cataloging the knives I have, and one day when I "croak" he will get them all with my docs, he said he's not excited about me croaking, but will be glad to inherit the family history and legacy. :-)

As to I*XL or I-XL mentioned by Clint, most likely one of those were what my dad meant. I had seen I*XL images very similar, but all have I*XL prominently on them. Apparently my grandfather "really liked IXL knives" - whichever ones they were. My sister (still in South Africa) now has a tomato knife with very fine tooth serrated blade and a round circle on the end, I assume part of the design for Victorian era tomato cutting and serving.

I'll ask her to check that out for markings and send me an image, that might give more clues about exactly what my dad meant by IXL knives - as in I*XL, I-XL or other

I took the liberty of sharing Allan's photo here as he seems to have had trouble with doing that . 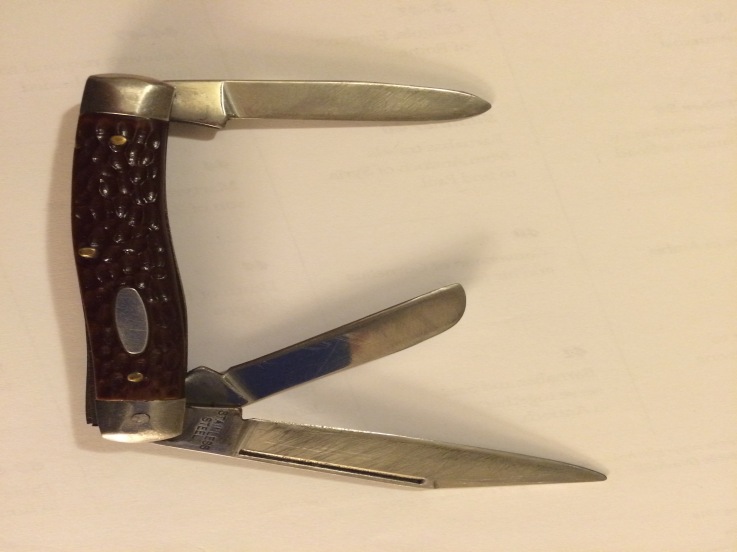 IXL could mean the blade was constructed of stainless steel. I*XL or I-XL refers to a George Wostenholm in Sheffield England.something different. These knives were exported to the Americas as well as past colonies in Africa. There is a story that Jim Bowie ordered knives from Wostenholm. As for stainless steel "inox" is another International symbol for this metal. I have read, good quality stainless knives were not made till the early 50's. I know they were made earlier than this but lack the quality there is now.

You might send your photo in an email to a member who can post this. Never the less, Allanm this is a neat and interesting story. Thanks for sharing.

Another link I had found yesterday, right back here to iKC, back in November 2013 Ken Spielvogel posted on iKC about an IXL Schrade Wostenholm (image) that he had bought via eBay. Other than markings, and the absence of the little metal inlay in the handle, Ken's knife (forum link) looks almost identical to my grandfather's.

Having some trouble which I'm guessing must be our proxy / content filter interfering, but I managed to upload a photo into my own album. Over time I'll show more of other knives I have managed to accumulate over the years and information IO have about them.

Hi, I'm hoping somebody will recognize, or help me confirm what I have found so far - some research is what led me to iKnifeCollector a few days ago. I have an old knife given to me by my dad, which was his dad's knife on a farm way back. My grandfather was born in South Africa but ended up farming in Rhodesia (now Zimbabwe) where I was born and raised.

I asked my dad over the weekend if he knew how old the knife is, I was guessing older than 1960 since my grandfather carried it while farming and I know by 1960 he had retired and was living in a small cottage near a city. My dad said he remembered his dad carrying the knife when he was just a small boy, so it came from at least 1936 or possibly older.

The only marking on the knife is "Stainless Steel" on one of the blades, other marks possibly just wore off over time since this was clearly my grandfather's work / every day carry knife and not a collector's item to him. My dad guessed it might be an IXL, which makes some sense since Rhodesia was a British colony and had a lot of British influence. Since the stainless steel stamp in the largest blade is still there and very well defined I think the chance of other stamping being work off is very remote - but maybe the little oval inlay, or the bolsters had less defined marks that could have worn off in 80 or so years.

I hope the image emebds in here properly, on lunch right now and the proxy server at work is whining about social media in the forums. If the image doesn't make it ok, I will try to correct this from home tonight.

The closest I have found in searching is a Kutmaster Stockman which actually looks virtually identical to mine - noting in particular the very long, I think unusually long thumbnail opening groove on the largest blade.

This knife has three blades, it looks to me like clip point (? not totally sure, I'm still learning all the types), drop point and sheepsfoot - which might have been a particularly useful blade on the farm with animals, and whittling.

I really should have put a tape measure or ruler next to this knife in my image to give an idea of size - but the Kutmaster Stockman (linked above) appears to be the same size, 4 inches folded length.

Mike, it probably isn't, but that looks a lot like the Winchester W to me.

Any help appreciated. Does anyone recognize this tang stamp? I know its a shell puller but for the life of me cannot figure out the maker.