A wise individual once told me that you could take a blade from a Rough Rider knife and interchange it with a like patterned CASE knife.  I have seen this aspect in whitttler patterns from both brands.

Recently, I've picked up several CASE 75 pattern large Stockmans and wanted to compare a Rough Rider  (RR603) to one of the CASEs. 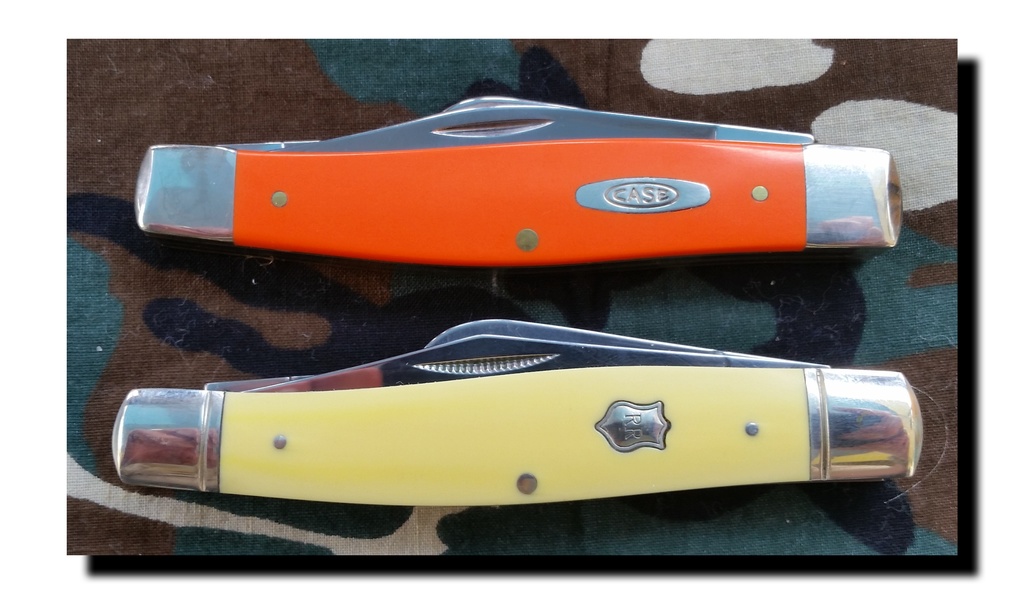 Of my 75's I chose the Orange Comp to contrast the Yellow Comp of the Rough Rider.

Out of the box the CASE was cosmetically very good, however I had issues with the Rough Rider.  The fit and finish didn't compare.  Perhaps it was a bad run, or perhaps I just got one that was "off", but the shield was noticably off and the bolster pins wasn't polished.  I did like the ring  bolsters that Rough Rider puts on their Yellow Comp series. 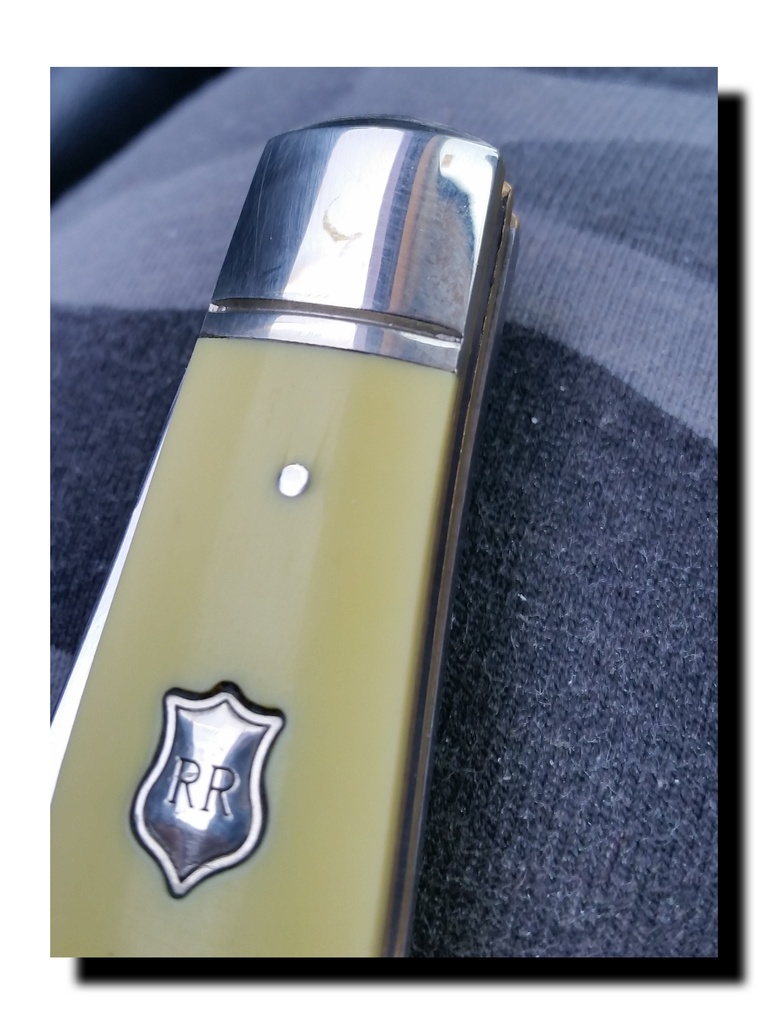 The blades on both knives were pretty sharp, out of the box, with the CASE having a more polished edge.  As you can see, they are pretty much the same. 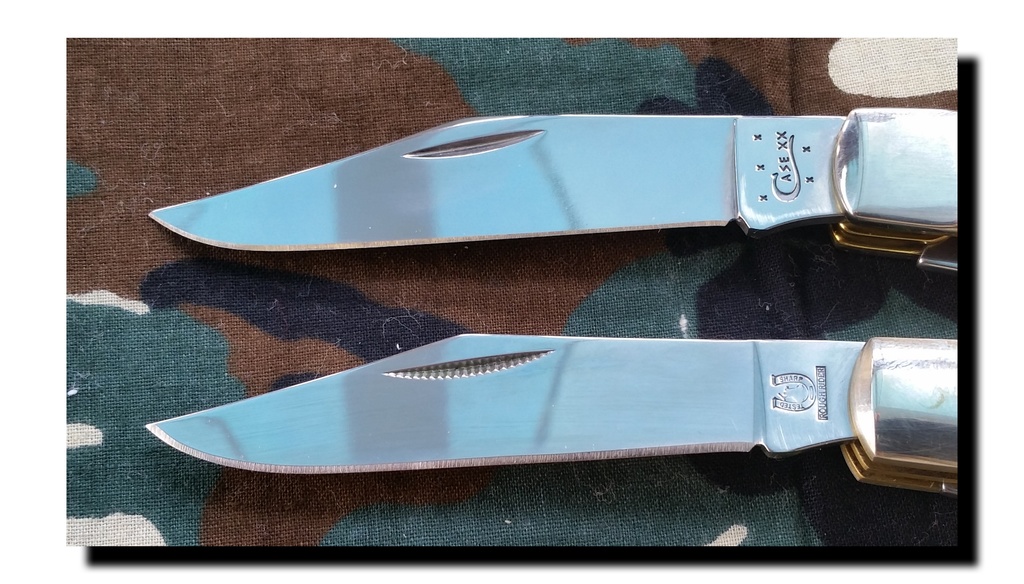 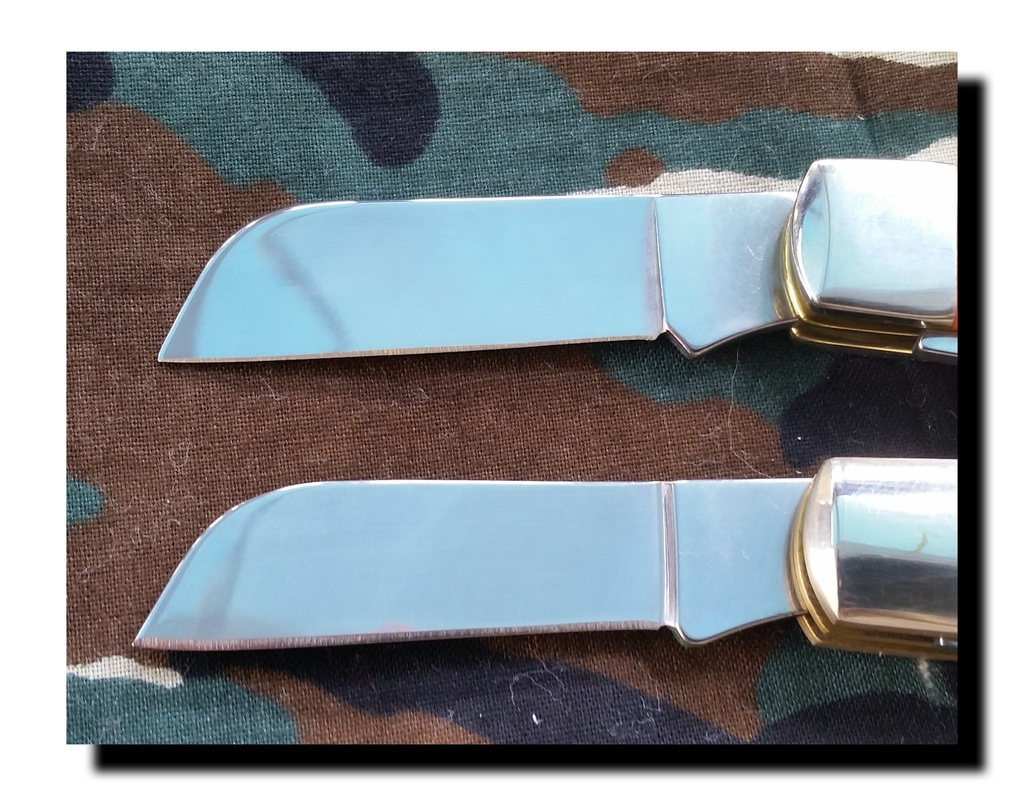 The similarly ended here though.  When looking down at the knives it's very obvious that the blades on the Rough Rider we're noticably thinner than on the CASE.

I don't have a fancy micrometer, but I'd say that they were fully only 2/3 the thickness of the CASE, while keeping the same approximate thickness at the tang.

I don't necessarily see this as a problem, as I've seen this in other knives, but I think that Rough Rider could have thinned out the tangs also and given us a thinner overall knife.

No fancy scales either, so by my hand scales, I can't really detect a noticable difference in the weight of either one.

After some personalization, ie lowering the sheeps foot blade and rounding out the edges of the scales I'll see how it does in the long run. 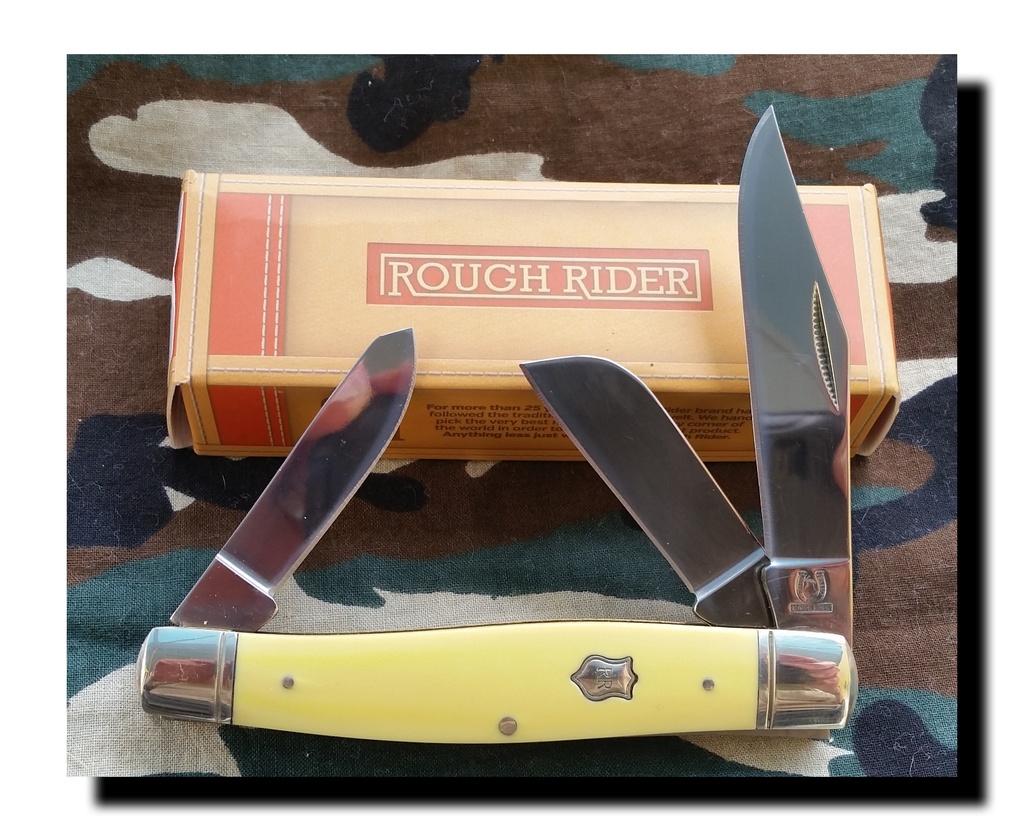 Found this YouTube comparison for the RR and CASE.

I'm liking the RR now that I've got the scales smoothed down some.  I'm betting that the shield issue comes from a new batch of shields being put into scales prepped for the old shield.

I'm definitely, more than a little bit, discouraged with the blades...they've been thinned down so much it's rediculous.  Can't say that it's an isolated knife, either, because you know I got 2.

I've reviewed every YouTube video with the 603s and from what I've seen, that's the way they are.

I've never seen a Rough Rider that failed, miserably, but from my standpoint, this pattern did.

Made my mind up that I'm not going to EDC the Rough Rider.  Went looking for a Yellow Comp CASE, because I wanted a CV.  Nowhere in town had the yellow, so I picked up an Amber CV. 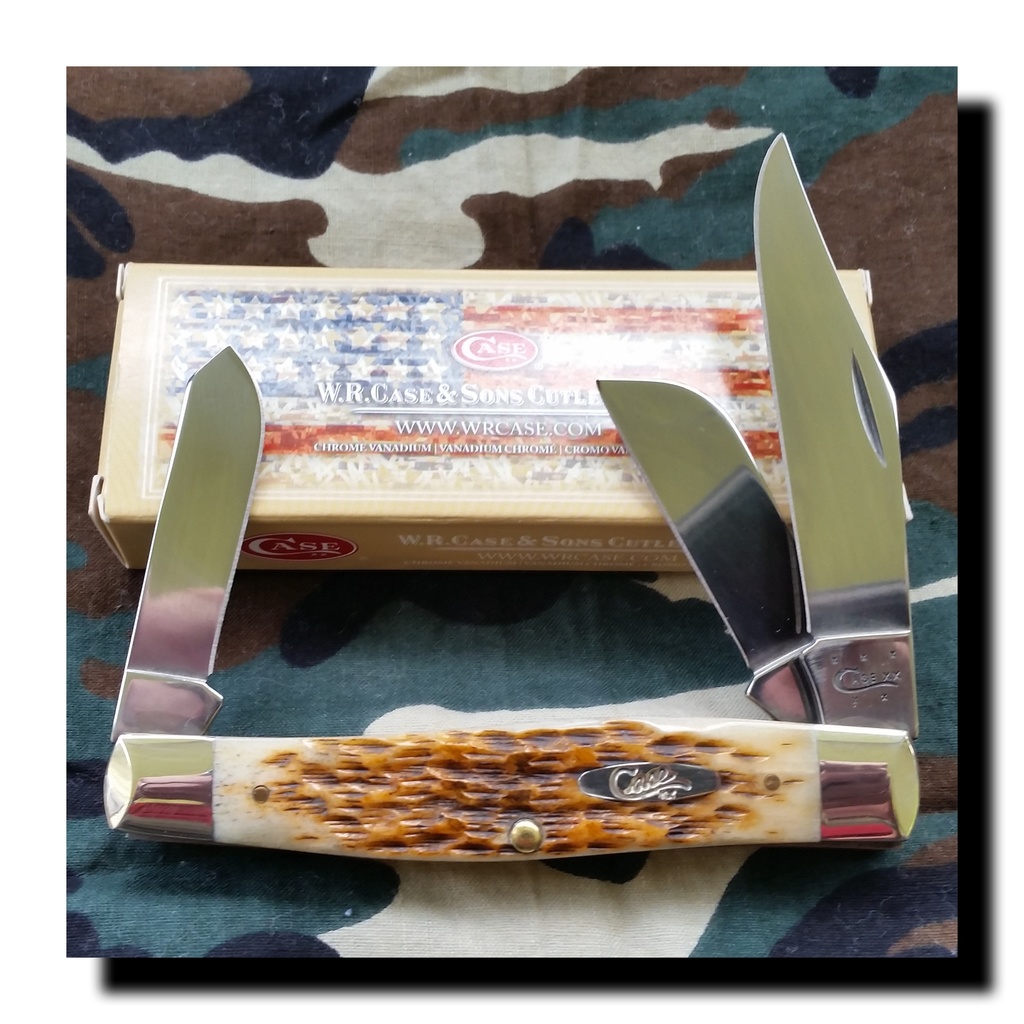 It would have been nice if they'd take the time to address the issues.

In case you haven't seen the post about my CASE, it broke.  Backspring is caput.  I've sent it to CASE, for repair.

In the meantime, Tobias had checked the specs and verified the "thinness" of the blades. 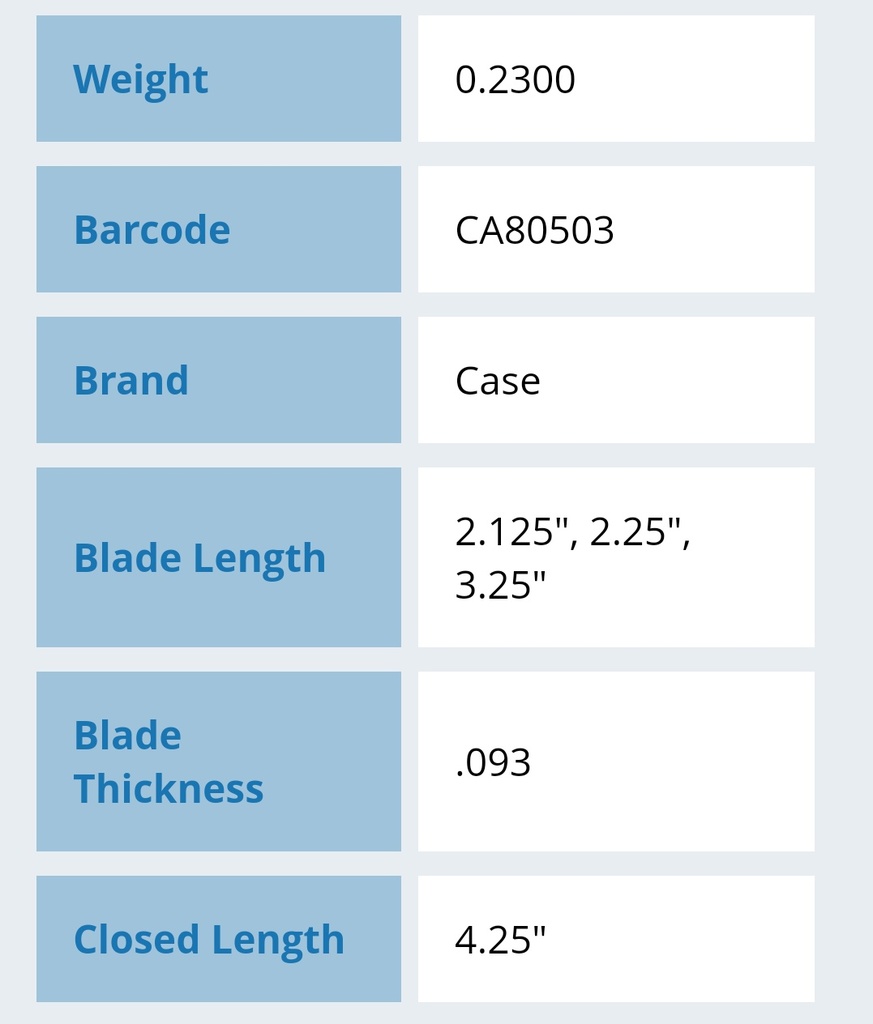 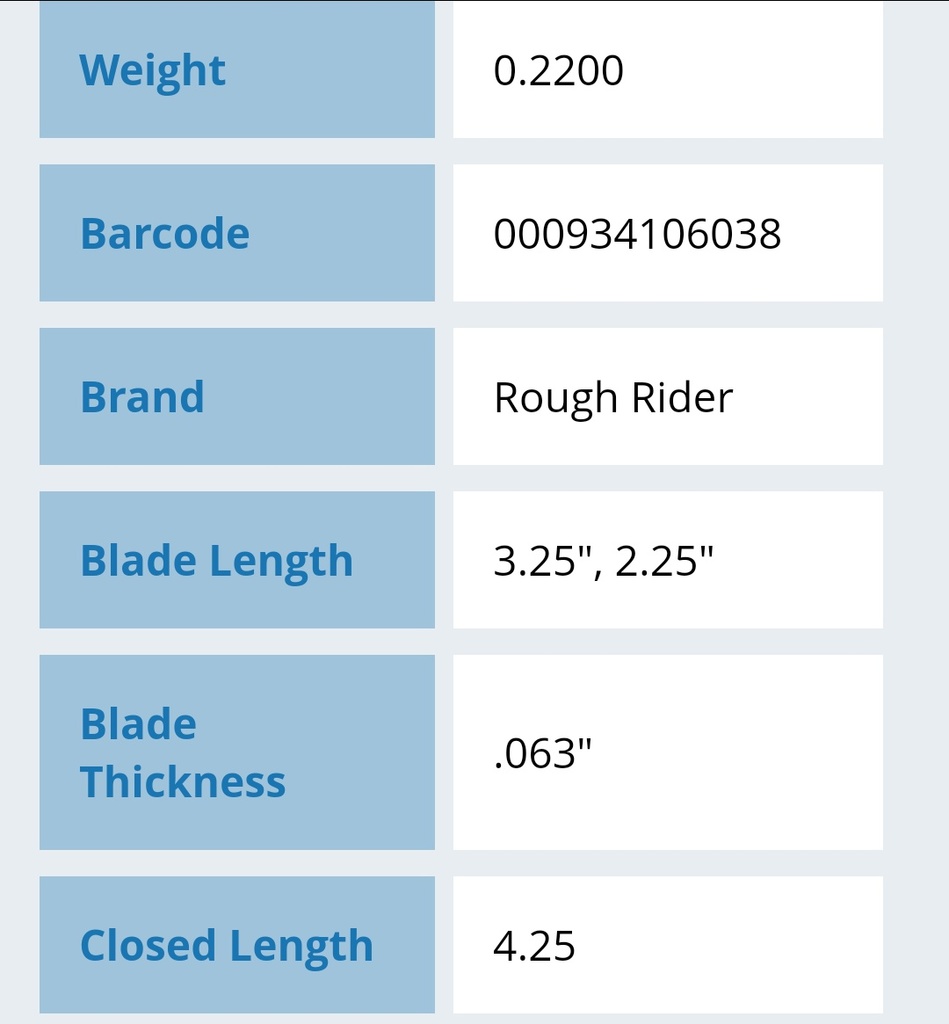 As can be seen, the current production Rough Riders have roughly 2/3 thickness as the CASE.

He did refer me to another Rough Rider, in red bone, that according to the specs has slightly thicker blades than the CASE. 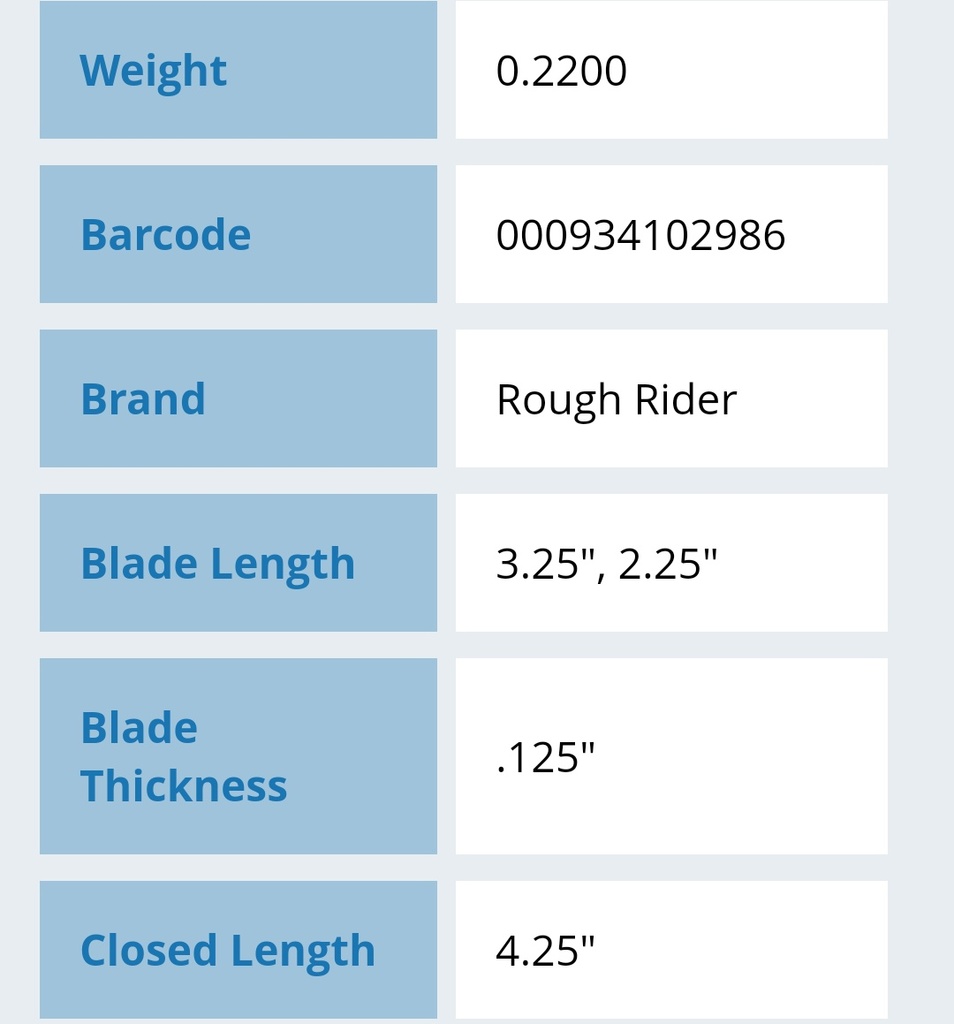 Of course they're out of stock at SMKW but I was able to find one on eBay, so I'll have something to use while the folks up in Bradford repair my CASE.

I'll see how the red bone measures up, when it arrives.

Looks like someone at SMKW (whoever runs the RR Facebook page) got a little testy about me questioning the thickness of the blades in their new knives... 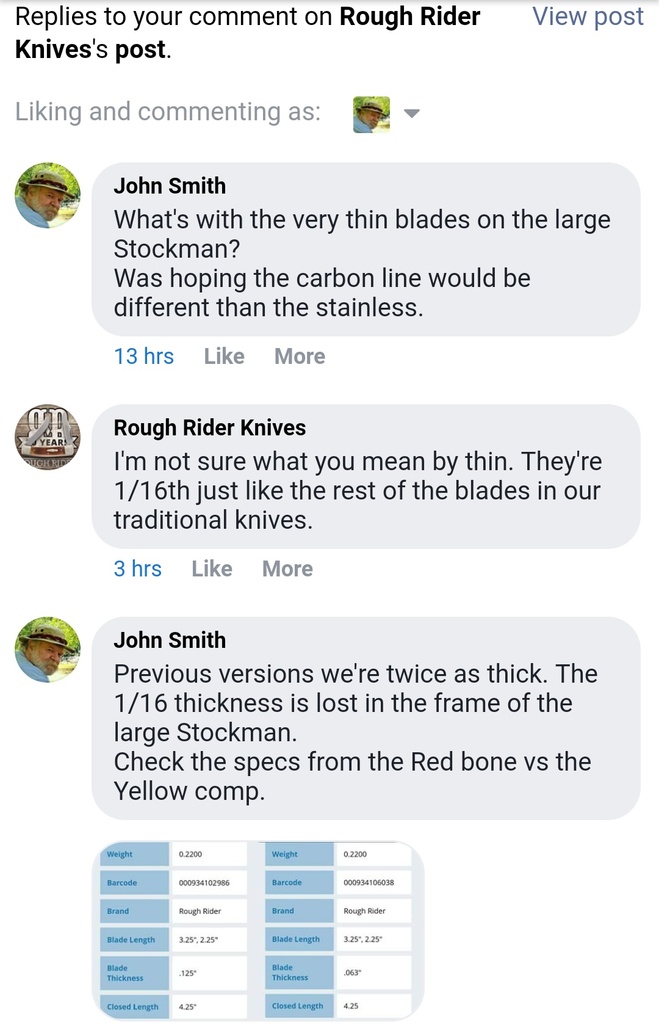 I'm taking this to mean that all the new knives will have these thin blades?

I like the size and on the lighter side "Buck 301-ish" pulls of around a "4" on both the Rough Riders.

As for the quality, I have no complaints. There is no blade wobble. They are not "perfect" (if they were, they would be far out of my price range) but they make for a fine EDC Work Knife.

I don't own a safe, so I have no need of a "Safe Queen." Come to that, even if I did have a safe, Id have little use for a knife that is only suitable for display. I figure they were made to be used (not abused), not hidden away to rot somewhere in the hopes that it would appreciate in value rather than depreciate like pretty much everything else in the known universe, should I ever decide to sell it.

If I cannot use it, why have it?

IMHO, a Rough Rider will cut or slice everything a Case can, and just as well-if not better,

The only Case pattern I have that I have a matching Rough Rider pattern, is the canoe. (Case is a CV Amber Bone that was gifted to me a couple years ago.)

I can honestly say the quality and fit and finish of the Rough Rider canoes I have, equal or exceed that of the Case.

I'm also more likely to carry one of the Rough Riders, because it would cost a heck of a lot less to replace it than the Case, should it be lost or something,

I am guilty of hoarding the safe queens.  With that being said I have always believed RR to be a quality of it's category.  You will most likely hear it said, "you cannot beat it for the cost" but face it, many of us would pay 10 dollars more and still carry one.  It would still be a deal.

They make the perfect gift for youngsters because you can buy two, surely the first WILL get lost.  You can feel very good about having one in your pocket when someone asks to borrow your knife.  It is a decent knife and if they hurt it, it is affordably replaced.  My glovebox, the kitchen junk drawer, my gardening pouch, all places in my house you are likely to find an RR because it will hold it's edge and I do not have to constantly be remembering to take it, put an edge on it and return it where it belongs.

Also in my sons' collection.  There were about a dozen years where mom filled in gaps of his collection with RR collectibles, they have done some darn fine ones over the years.  The moonshiner and the dog bone being my favorites to have added

PJ DeSolier left a comment for Jan Carter
50 minutes ago

Jan Carter left a comment for Joseph Mclaughlin
21 hours ago

Jan Carter left a comment for Joseph Mclaughlin
21 hours ago

Jan Carter left a comment for Matt Clark
21 hours ago