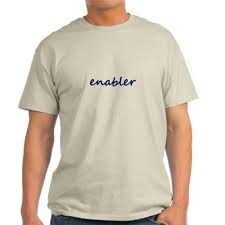 I wonder if they make this in a ladies?

i love this shirt.

Jan, I can't believe I didn't address convex grinds!  Bark River Tool & Knife (BRKT) has been doing the convex grind for years now, primarily in A2.  Jeff White is also using convex grinds on his thicker (1/8") knives.  I know there are others that are just slipping my mind at the moment, but when I started knife collecting, BRKT was the big convex grind company.

If you use a belt sander to sharpen your knives (a la Worksharp), you'll put a convex grind onto the edge.  This can be a disaster for tips so be incredibly careful!  But it does a great job for the edge itself (& works wonders for axes!).

The trick here with field sharpening is to bring along a strop, or even use some corrugated cardboard, to swipe the edge on frequently so that it doesn't go dull.  You can also use one of those sanding sponges in a fine grit for maintenance.  Or, the Lansky Puck was made for sharpening axes with convex grinds in the field, & comes complete with course (120) & medium (280) grit options.

If you're in a situation that went beyond maintenance & the blade really needs to be reworked, use a diamond or ceramic rod (not one that is in a v-formation) & do your best until you can get home.

Or, use your back-up knife & use the strop or belt sander when you get home!

Thought this would be a good place for this video

Good comparison.  Thanks for sharing, Jan.

Thanks for sharing the video Jan. I have not looked much at the Kukri knives. Seems like a good choice for a heavy splitting/chopping blade.

Just an update on what I ended up with. I bought a used TOPS B.O.B. (Brothers of Bushcraft) knife, from John McDowell. It is actually perfect for what I was looking for. The only thing I was wanting different, was a bit longer than this one. That problem was solved when I received the Colonial knife from Steve. Now I have 2 great knives that should work for any bush crafting, that I will be doing. Thank you all for your input and thank you John and Steve for the great knives!

What do you guys think of Condor's Primitive Bush Knife, with the Matt Graham signature?  420 HC Stainless, 13.5" overall, complete with standard Condor hole and leather sheath that sorta slips under your belt (no belt loop).  Looks interesting to me, checked it out a bit on YouTube...worth considering???

I do not own one myself, but I have heard good things about them.

Ernest, I'm more into Matt Graham's style than that specific knife, partially because of the steel, partially because of the dagger-style handle.  That said, Matt modded an old Condor bush knife of some sort (in a line of knives no longer available, for the most part) years ago, & it seems that knife has been holding up for him for a long time (okay, he could have modded several).

Regardless, Matt has been sticking by his knife design, which indicates that it's been working well for him, in all sorts of environments.  He even used a Daniel Winkler designed WKII belt knife in one of the episodes of Dual Survival.  I love the look of the WKII belt knife, but I took notice when that knife never returned after that episode.

That Condor knife has a blade made of thin stock, making it likely a really good slicer, but it would be wide enough to dig with, & the spear/drop point should be sturdy enough to drill fire boards with, especially since bow drill fires are an area of Matt's expertise.  Further, Condor has made a major overhaul of its product lines (likely due in large part to new designers, especially Joe Flowers).

My guess is their heat treats have become better than they were, & pretty much across the board their knives are sharper right out of the box than they ever used to be (but still not like a Spyderco or a Cold Steel), with much better grinds overall too.  I tend to hawk on companies that use 420 (yeah, Buck, I mean you) not because it can't be worked into a good steel, but because it's such an obvious cost-saving measure (as in, that's a corner that is cut just too far) -- but I'm more willing to forgive Condor, since it's relatively new to the US market.

I have one of the original Condor Bushlores & it is really a pathetic mess compared to the current iteration of the Bushlore.  The steel's been shaved down to 1/8", the secondary bevel grind is higher, the fit & finish are better -- it's really a whole new knife, & I believe they've done this to a lot of their products.  With that Matt Graham knife, a really prominent knife, Condor's more likely to bring their A game, so it's a good bet that it's a really decent knife.  Though I will make it clear that while I've been very close to buying it on a number of occasions, I do not actually own nor have I worked with the knife in question.

If you do decide to buy it, though it's not the absolutely lowest price on the web, look into the option that Baryonyx offers -- for a few extra dollars, they'll thin out & sharpen the edge.  I bought my Crotalus from Baryonyx with this option, & that knife is quite sharp now, but it's far from being kitchen cutlery thin.

Grohmann knives are definitely a thing a beauty and function!

Jan Carter left a comment for James Land
19 hours ago

Jan Carter left a comment for WILLIAM LYNN
19 hours ago

Jan Carter left a comment for Wayne Powell
19 hours ago

Robert E Atnip is now a member of iKnife Collector
19 hours ago
Welcome Them!