Here is something you don't see that often, a '72-'86 Buck #307 Wrangler in Yellow Sawcut Delrin made by Camillus for Buck. I've seen this handle color in post '86 Buck-made knives, but this is the first one of this color and vintage that I've seen for sale, so I couldn't resist, (I have seen other models of this era in Yellow Delrin but this was the first yellow #307 I've seen). I have Yellow Delrin knives of models #301, (post "86), #303, (also post '86), #332, #331 Barlows & #322 Congress, (all '90's SFO's for SMKW). Found this one on the bay, mislabeled as a #305 Lancer, which was weird, so I ended up getting it for substantially less than it could have brought if correctly labeled, and less than the price a regular '72-'86 #307 in Black Delrin would usually go for. Of course it's considered as one of my 300 Series collectibles now, but it has been used enough to warrant being part of my edc rotation as a user. Already found a sheath for its' 4.25" closed length, (too big for my pocket so I carry it in a sheath). Still sharp, still tight, still snappy, just gently used; doesn't get much better than that in my world. Now if I could only find the elusive #313 Muskrat in yellow, they are rare but I know they exist, there may even be a #311 Slimline Trapper or even a #317 Trailblazer out there, (or maybe a #309 Companion or a #315 Yachstman, (which both exist), or maybe even a #319 Rancher or #305 Lancer in yellow? And wow, maybe there is a #305 Clipper in yellow out there? The Buck hunt never ends and the "versions" are infinite, so looks like I'll be at this for awhile!

BTW: I have a red handled knife in my sights, but I won't spoil the surprise, plus if I said what it was it might curse the auction; just stand by for more Buck news soon, (hopefully! I think my credit cards are gonna run away and hide one of these days). 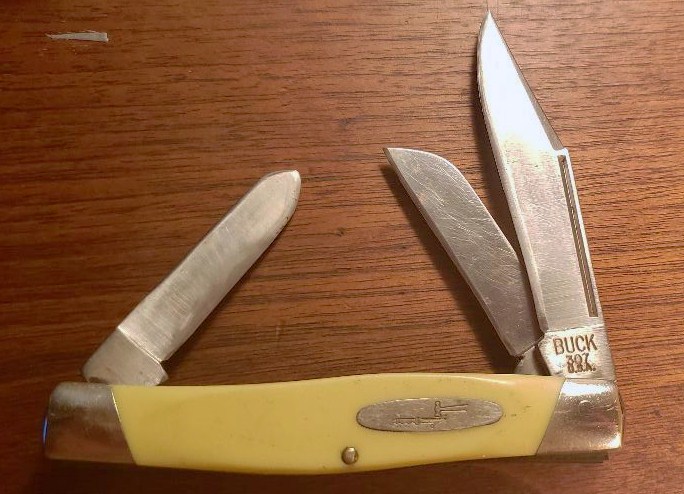 Just found out on the BCCI Facebook Group that the #307 above was actually a 1995 exclusive for SMKW, it just looks like a pre '86. Apparently there were only 1,000 made; wow!! This was confirmed by a "like" from a well known company official. It was dumb luck, but being fostered over the years by fellow AAPK/BCCI members bertl & 300bucks has trained my eye, those guys deserve most of the credit. "the sawcut yellow Delrin Buck 307 was made by Camillus as an exclusive for SMKW in 1995. One-thousand of them were made, and since it was a Camillus knife no date code was used. Nice find." Here is a corrny but true statement:, "if you don't look you don't find".

Jan Carter left a comment for Marty Dunning
6 hours ago

Matt Clark left a comment for Matt Clark
20 hours ago

Featureddead_left_knife_guy left a comment for Matt Clark
20 hours ago

Featureddead_left_knife_guy left a comment for Marty Dunning
20 hours ago

Jan Carter left a comment for PJ DeSolier
23 hours ago