As any of you long-time collectors know, finding the knives produced by companies that existed during the “good old days” is somewhat like finding buried treasure. With that in mind, I thought that I’d take you along for the ride while I do some research on a recent slip joint pocket knife acquisition. The knife in question is an oldie…and the company that made it no longer exists. Like so many other things in life, it’s time on earth passed…but it did leave a tangible mark. Our little adventure begins…with the knife shown in the photo… 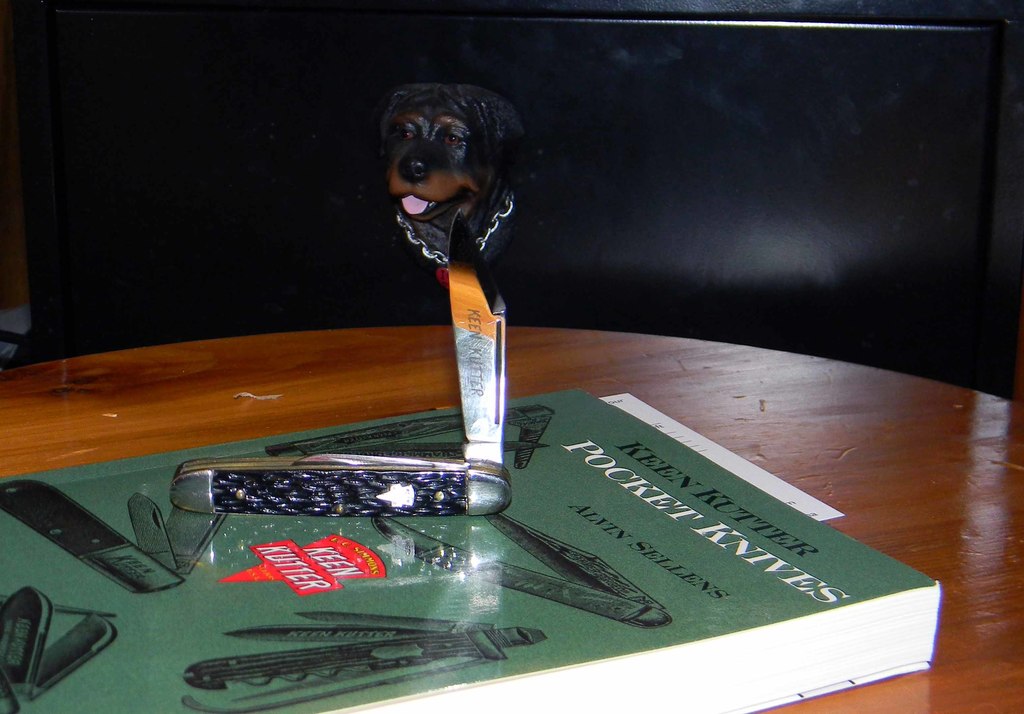 It’s a Simmons Keen Cutter. I’m not the original owner (in case you are curious); the individual that I bought this from said that it was a “serpentine jack” and that it was dated between 1940 and 1960. He also said that it looked like it had never been used. Taking a good look at this nifty little pocket knife yields some initial observations:

With “the obvious” stated, lets dig a little deeper and find out just what is really in front of us. The key word in the previous sentence is “little”. I’m not going to physically do a major archeological dig-out on this, so we’ll use the tools that we have at hand, namely;

Since I first referenced the book in the photo…and since Mr. Sellens undoubtedly knows more about the subject matter than we do…and is likely to be found on the internet…lets begin there, shall we? Besides, I like books more than I like the internet. In the book, here is what I found:

A)    The logo shields with “Keen Kutter” inscribed on them were first produced in 1942. The knives made with this shield were sold by Shapleigh Hardware Company after it purchased Simmons Hardware Company in 1940. That dates this knife post 1942. The knives with this shield didn’t appear in the 1959 catalog…which tells us that the knife was made sometime between 1942 and 1958.

C)    Plastic is listed as a handle material. Since plastic doesn’t shrink, the scales must have been produced a little undersized at the factory.

D)    Simmons used both steel and German Nickel Silver for bolsters…and references are made to the knives having caps. So, given that this knife has plastic handles, I’m going to say that the bolsters are simply polished steel.

E)     The knife’s original purchase price was between $1 and $2.50. As a point of reference, the average annual income for an American family in 1951 was $2,800. Interestingly, the same level of knife, made in the USA, in today’s world, costs nearly double what it did in 1951 (proportionately; obviously, this knife couldn't be made for $5 "today"). I’ll let you folks with an avid interest in economics comment on that outcome.

F)     Blade etchings, such as the one shown on the presentation side of the main blade, don’t always denote any specific time period. This makes dating the knife more challenging.

G)    The logo stamp on the presentation side of the main blade’s tang was used for knives made from 1939 and earlier. This seems to go contrary to the shield on the handle (mentioned in “A” above). So, the reasonable conclusion seems to be that this knife was produced in the early 1940s using some components (such as the main blade) produced in 1939.

H)    Not all Keen Kutter knives have numbers stamped on the main blade’s tang. This one does; the number 833. Looking through the book, I see that the vast majority begin with the letter “K” and are then followed with numbers. I didn’t find the pattern number 833 anywhere in the book.

The book reasonably explored, time to see what the internet has to say on the matter. After much Googling and Binging around, here’s what I found:

Well, well, well…there we go. This spiffy little pocket knife has a rather interesting background. No…I don’t know how many people have owned this knife prior to me. I got the impression that the previous owner got it from an estate sale. Could be that the owner previous to the previous owner was the original owner (now that's a sentence to make an English teacher grimace!). The knife is in good enough condition for that to be the case. Given that this knife is probably in excess of 70 years old, it's remarkable that it's in this good of shape! What kind of shape? Well, I could actually use it, regularly, in today's world. How many other things have come and gone in the past 70 years? A series of wars, economic turns, a total shift in the societal makeup of the USA...and more. Wow...

Life does certainly happen LOL.  This is the kind of research that I just love.  Find the widest point, narrow it down and enjoy the adventure.  My, oh my, what this little gem has seen in it's life.  Carry it Chris...it deserves the honor of being an EDC

KnifeMakerJohn Burrell is now a member of iKnife Collector
7 hours ago
Welcome Them!