I wasn't sure which forum to post this in, so I decided to put it here on my blog page.

I won the Case Carhartt Caliber here on IKC in one of Jan's contests, and have carried it daily since then, so obviously I like the knife a lot. Recently I ran across this Gerber at the local swap meet, (got it for $7.50), which I believe to be an "LST", or a model 400, (nothing other than "Gerber" and "Portland Oregon" are on the blade).. As you can see, they are very similar in size and shape, and both sport "Zytel" handle material, (supposedly "nearly indestructible").

After carrying and using both of them I must say that I now think the Gerber is a slightly better knife. Of course the Caliber is a fine knife too, but the Gerber is heavier than the Case, and opens and closes like it was on ball bearings; literally the smoothest opening/closing folding knife that I own. It also has a lanyard hole, which the Carhartt does not. Why? I have no idea, it obviously has no ball bearings, so all I can think of is it has tighter tolerances than the Case version. Both knives feature tight, sharp blades, positive locking mechanisms, and of course that "nearly indestructible" handle material, but somehow Gerber trumped Case in mechanical operation. Whether by design or accident I don't know.

I'll keep both in my EDC rotation, as both are high quality, well built knives, but I think the Gerber will be in my pocket more often just due too it's smooth operation. I'll have to keep my eyes open for more of these.

However, I can't say anything negative about Case Caliber knives, as my current "favorite" knife is another Calier I own, a Case Caliber Tan Peanut, but between the two knives below I have to say the Gerber wins the prize for "smoothest". 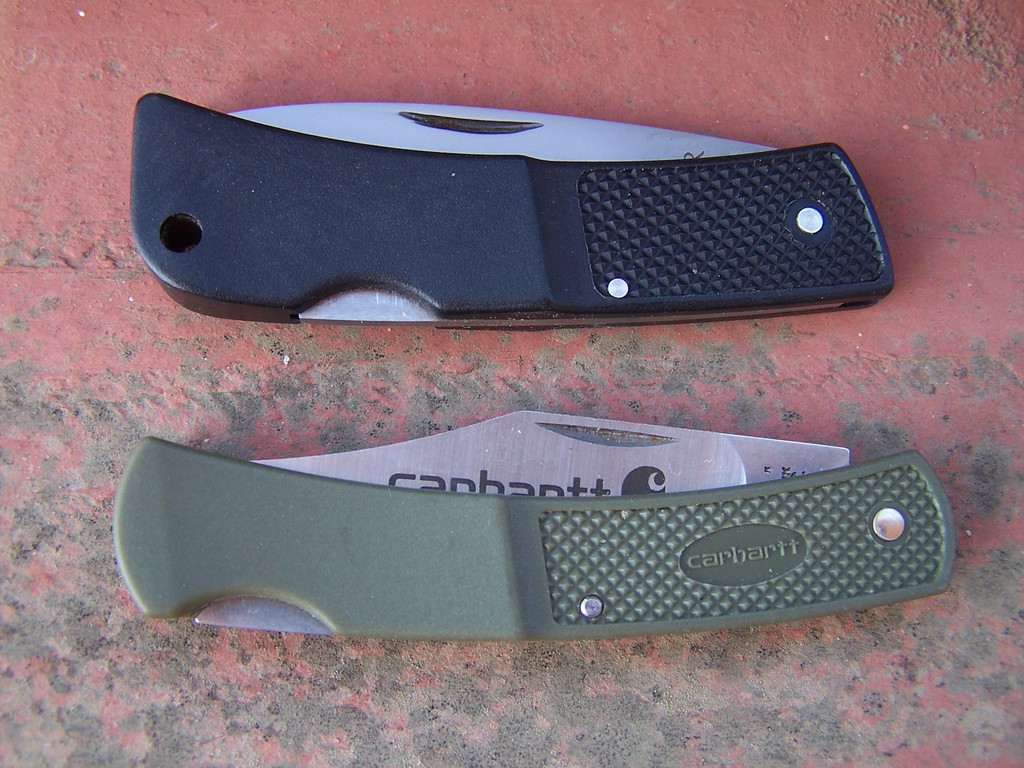 Thanks Llantz. It just set me to wondering how a knife I considered to be one of the most well made, (the Case Caliber), suddenly fell short when I compared it to a similar knife from another maker. Like I said earlier, both brands produce great products, but in this case Gerber gets the prize. Amazing how holding something in your hand can tell you more about something than it's looks.

I considered that Jan, and I wouldn't be surprised if there was a silicone washer in there, (but I don't want to disassemble it to find out). I mean it really is noticeable. The Case opens in a "normal" fashion, just like any other good slip joint, but this Gerber is so smooth it was abundantly noticeable. I don't have a huge collection, maybe around 40 or 50 knives altogether, but of all of those this Gerber is by far the smoothest. Something else I noticed is that there is hardly a gap visible between the spring and the lock release when it's open and locked, you have to look really close to see the gap where they meet. That is a sign of very tight machining tolerances; it may just be something as simple as tighter fitting parts.

Honestly it could be a s simple as a washer.  I understand Case uses washers on the higher ends (TB's) but not on these lower price points.  I have no knowledge as to whether or not Gerber uses them

Jeremy, both knives are US-made, the Gerber in Portland, OR, and the Case in PA. If I were comparing an import with a domestic knife I would have said so. Gerber, like Buck, does import some of their knives, but this model is not one of them. The reason I did this comparison in the first place was like Jan said, it's an interesting comparison between two popular brands of a similar frame.

Don't get me wrong, the Case Carhartt Caliber is a fine example of a US-made knife, my Case Caliber Peanut is too. I just noticed how utterly smooth the opening/closing action was on this Gerber, and was kind of fascinated at how different these two seemingly similar knives were. I have had other Gerbers, notably a 1970's model called the Paul Knife, that was stolen from me in a burglary years ago, (a rare, and very expensive model nowadays), and this one reminded me of that in it's smooth opening action. I don't know what Gerber is doing differently than Case as far as assembling these similar knives go, but Gerber is definitely doing something "smooth". It's almost like they "Parkerized" the metal or something, (or impregnated the metal with silicone or something).

If you just held the Caliber in your hands and opened it you would think, "nice knife", but after handling this Gerber, I'm sure you too would notice the smooth opening compared to the Case. Again, there is NOTHING wrong with the Case, I just noticed a distinct difference I wanted to share with you guys.

I hope this isn't a sign of the future. I really like buying American made products (especially knives) when I can. I have high hopes that American pride and quality are evident in the products i buy. I am disappointed when I hear the quality is not as good when compared to an item made in China.

This is an extremely interesting comparison.  They are very close in size, shape and style, I would assume the steels are comparable.  I am not so surprised that the action is different on them, I am surprised it is so noticeably different on them.

Caleb Conley left a comment for Ken Mundhenk
23 hours ago