In case you didn't know, SMKW, (Smokey Mountain Knife Works), has an Ebay store. Here's a link: http://stores.ebay.com/MVPs-Knives?_trksid=p2047675.l2563. They call it something else, but if you dig around on the store site you find the SMKW references. They have a quite a number of very nice, very delicious US-made knives for sale, some of them very seldom seen for sale, (like this Buck, but also Case, Robeson, and many others). Before I figured out who they were, I was wondering just where they got all these collectible knives, and now I know. Think about it, SMKW has all those past SFO's, and oh so many other collectibles from past decades stuffed away on a shelf somewhere. Apparently they are selling off some of their NOS, (new old stock), and I for one am taking advantage of it.

I just won a new-in-the-box SFO, (special factory order), Buck #331 Grand Daddy Barlow in Black Sawcut Delrin, made by Camillus on SFO around 1999, and only sold in the SMKW catalog; never listed or sold by Buck itself. It will be one of the jewels in my CC-made 300 series collection, and one I never expected to even see for sale. I am also bidding on another item they have listed, but won't mention which so I won't be competing with you guys for that one. The price I paid was on the upper end of what I am comfortable paying, (way upper end), but I've seen them sell for much more, and have never seen one new-in-box, so I'm happy, (but broke). I'm scared to death that I will win that second auction, but I'm sure that won't deter me, (I can live on peanut butter and beans if necessary).

I, really, really should not have spent so much on a single knife, and my budget will suffer considerably because of it, but the chance to get one of these new in the box was just too rare a chance to pass up, (that's my story and I'm stickin' to it). I'll have to sell off something else to make up for it, but it's worth it considering what I scored, (in my dysfunctional addictive opinion that is). If I win the second auction I will be doubly screwed budget-wise, but I will have two very cool, very collectible knives to look at while standing in the local soup line.

Stay tuned. Here's a photo from the auction, will post others when it arrives. I'll also track down some further historical info on the knife, and will post that here also. 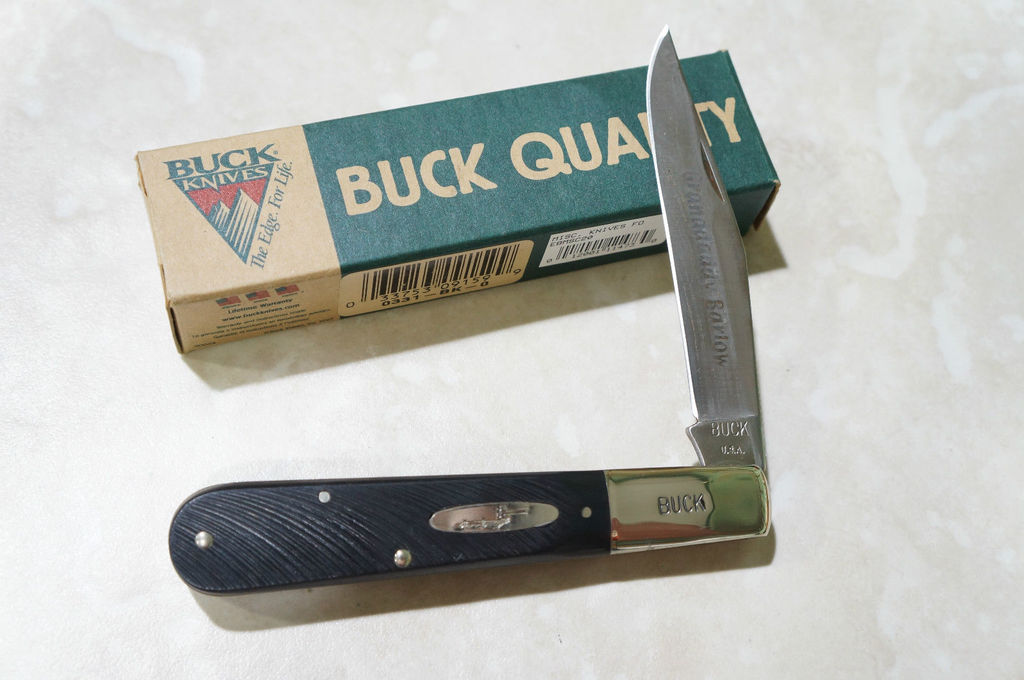 Thanks Jan, I'm thrilled for sure. My constant surfing of the bay paid off this time, just wish I could have snagged the yellow one too. Oh well, something special to leave my grandson, (I'm spending his inheritance, hope he likes knives 'cause that's all he's gettin').

That store has a lot of one-of-a-kind knives being offered, just wish I had an unlimited budget.

What a find!  It is a great addition to the 300 series collection, a centerpiece!

My Buck #331 Granddaddy Barlow just arrived in SMKW box with SMKW invoice, so that confirms to me they are selling left over catalog items from years past in that Ebay store. From what I've researched, these were ordered by SMKW from Buck on SFO, were manufactured by Camillus, shipped back to Buck for packaging, then sent to SMKW for inclusion in their catalog. These were made in 1999, so this has been sitting on a shelf at SMKW since then.

The knife arrived new in the box with factory wrapping and paperwork as advertised, and is indeed in "unused" condition. BIG knife, biggest Barlow I have ever seen, (though I know there are other brands of GD Barlows out there). I included a side by side with one of my 110's to show just how big it really is. Of course this will be one of the few knives I own that I won't carry or use, just proudly displayed on my stump; t will be preserved as is. According to the Buck gurus over on AAPK there were fewer than 1,000 of these ever made, (probably far fewer), so it qualifies as legitimately "rare".

Thrilled to have it, it will be the crown of my CC-made Buck 300 Series collection. Still sweating the hit to my budget, but having it here in hand makes it worth it. Just wish I could have snagged the Yellow Delrin version they were selling too, but at least I managed to get this one. Thanks, will do Jan. Just got the tracking number today, so it's a couple of days out yet. There was a Yellow Delrin handled version listed too, but it ended up going for more than I paid for the black one, so I had to let it go. The shipment is coming directly from SMKW, so I know for sure that bay store is their back stock being offered up. There are a lot of Case knives, many 10-20 years old, (but brand new), being auctioned off there. I'd take a look if I were you guys.

looks great, looking forward to hearing more about this one

Thanks Derek. I watch the bay and other sources daily to keep up with what is available, and believe me I pass up a lot of Buck's CC-made regular production models on price because I know a more affordable one will come along eventually. Not so with these SFO knives, (there were several SFO's from Buck, made by Camillus for SMKW), they are few and far between, and many only appeared in their catalog for a relative short period of time.

As an example; In coin collecting, rarity, ie how many of a certain coin was made in any particular year, is a key factor in determining collector value, almost as important as condition, and I think that same theory applies to collectible knives, (at least it should). There were far fewer of the SFO models made than any of Buck's "regular" production models, so it follows that those knives should retain, and hopefully increase in value over time at a rate higher then the production knives. Of course like any other investment, that comes with risk, but anything increases in value if kept long enough.

There are several other 300 series SFO's out there, and so far I have only two, (this #331 GD Barlow, and a #321 Congress), so if you include the two regular production models I am still lacking, I will be looking to collect a complete group of CC-made 300 models for some time to come. The Buck gurus tell me I'll need 30-40 knives to have all of them, and the various versions of each, so it looks like I'll be at this for a while.

Its real nice when something you have been 'lusting' after for so long happens along and you are lucky enough to get it.

William F. Grizzell is now a member of iKnife Collector
17 hours ago
Welcome Them!