Going back in time .

Well I am starting this blog to record my return to an older type of shaving . Like most of us I at present use the ubiquitous supermarket disposable razors , and have done so for , well I don't really know how long . When did these disposable and cartridge type of razors come about ? I guess I have been shaving regularly since I was around 16 which ,as I was born in 1953 , make it around 1969 when I started . I have a memory a very faint one I admit , to having a razor that twisted to open and receive a double edge blade of the kind that came in little rectangular boxes . I remember that the  blades came wrapped in paper and the used blades were posted into a slot in the back of the box . Now that is all I actually remember of these things and as soon as the more modern types , disposables came out I started using them. Well you would wouldn't you how many teenagers want to do things as their Fathers do most of us wanted to look modern I guess , well I did anyway .

So where is all this rambling leading to , I am glad you asked !  As I am getting somewhat better at sharpening knives My poor weak mind seems to be taken with the idea of buying a straight razor from an antiques centre ,something from the 1880's to around the demise of the Old Queen , in 1901 I think . I admit that I only knew the date of Queen Victoria's death from watching my favourite John Wayne film The Shootist . So the thought of going from a modern razor to an inexpertly sharpened cutthroat  is for me a daunting prospect and unusually good sense has prevailed and instead of leaping straight back to the end of the nineteenth century perhaps the 1950's may be a better place to start .

I have now checked out a few video's on YouTube and have found that the razors that I remember from my youth are indeed called DE or double edge . In fact this whole retro shaving lark is alive and kicking without me knowing anything about it . Youtube is awash with helpful young fellows scraping the whiskers off their finely honed chins with razors that they certainly don't remember from the first time round . Mind you I have learned an awful lot more about shaving than my Father ever taught me ,I guess it must have been him that showed me the ropes though I don't remember the lesson .

So I now have an Edwin Jagger DE89 razor and am waiting for those fine folks at Amazon to deliver the rest of the not inconsiderable amount of gear that it seems I must have . A styptic pencil ,what a word from the dawn of history , anyway I have forgotten to order one so in the short term things may get bloody !! The razor looks nice and I am thinking that it is probably of a lot higher quality than I would have had in the late sixties. I would likely have had an old one of my Dad's to start .

I hope to return to this blog in the future , blood loss allowing , and record my return journey to the shavings of my youth and hopefully back in time to the days of the Old Queen and a wonderful straight razor . Got to get through my lack of a styptic pencil first , can't imagine what a young girl in the chemist will think if I ask for one of those .

I have recently discovered that synthetic shaving brushes are available, not only are they out there but these things are reputedly very good.

Traditionally brushes tended to be either Badger hair or Boar bristle, which incidentally used to be the preferred material for toothbrushes I believe !  There are horse hair brushes and some that have a mixture but generally, that was it. recently I began hearing good reports about synthetic ones from a Chinese firm called Yaqi, available from Aliexpress so bound to be economical. Thought I should try one, and at $17 including postage then why not? It arrived last week after the usual couple of week delivery wait. Very very good is my opinion, and if I had known how economical they were then I would never have bothered buying Badger brushes. Well if anyone is either in need of a new shaving brush or wishes to treat a husband or partner then take my advice and go for one of these. 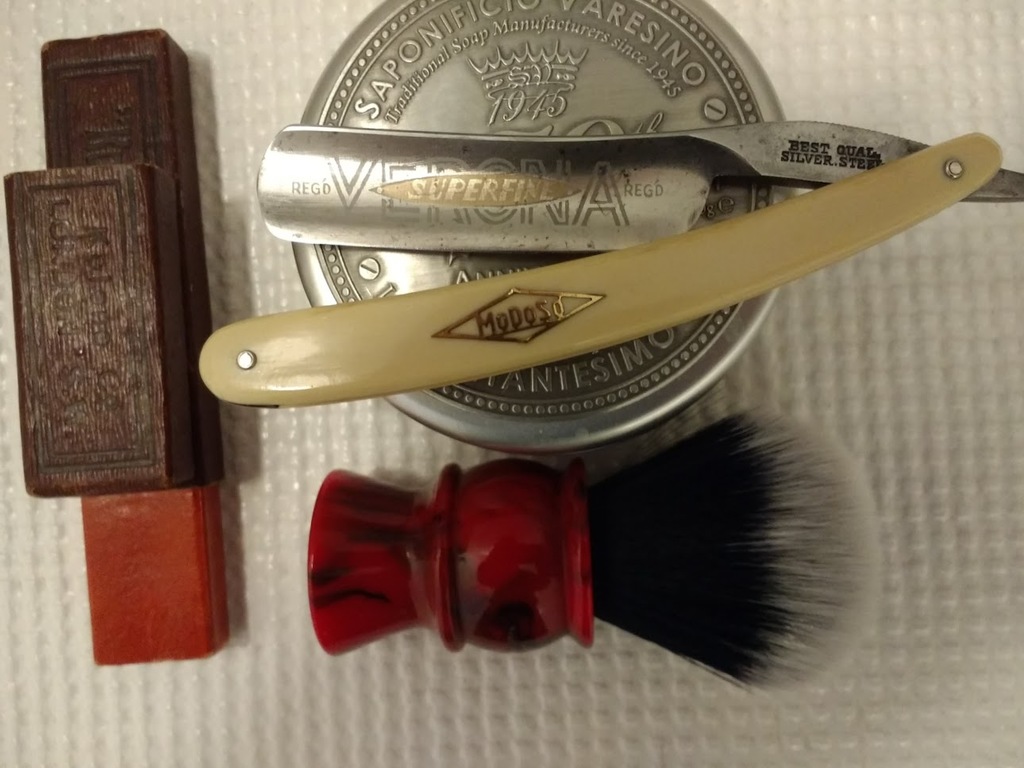 You know many folks in our age bracket, dont try new things as frightening as holding a straight razor to their face and throat.  I am not only impressed that you tried it but that you embraced it to the point your willing to hold up your trial and error sharpening !  Kudos my friend, you have earned the rank of shaving ninja from me!

It's been two years now and I am still fascinated by straight razors.

I have quite a few, can sharpen them pretty well and don't knick myself very often.

Using a straight razor is a great way to start the day, it does wake you up.

Altogether it must have been eighteen months before I really felt confident in both the use and the sharpening. Then again learning anything is more difficult when you are over sixty, I am glad I did it though and equally glad if I don't have to learn anything else that is quite as ...well frightening, as the first few times I put that razor against my face.

Even having said that I do recommend this old fashioned way of shaving as it gives better results and is a great way of waking yourself up in the morning.

Well it has been a year now since I wrote the first part of this blog , how quickly time does pass !
My wish was to return to an earlier way of shaving and in the past year that is just what I have done . Learning to use a DE razor again was really no trouble at all and they are a whole lot better to shave with than the multi blade disposable type , which seem to be an unnecessarily complex and expensive answer to a question that no one asked .
The next step that I wished to achieve was to buy , sharpen and learn to use a straight razor from the time of Queen Victoria . I am happy to now have several razors from that era and have managed to get them back into use .
So to finish off this blog a brief summary of this process may be of help to anyone else who wishes to follow this path .
Well learning to use a DE is easy and a good introduction to the old fashioned way of shaving . However using a straight razor is a little more demanding to start with and there is a definite learning curve to be negotiated ! However as long as you go slowly and steadily then there is nothing to be afraid of .
Sharpening a razor , now that is probably a more tricky area to approach . The reasons why are because of the sheer amount of information available online these days . Without youtube learning this sort of thing would be tricky , however with youtube it is very easy to get lost in the sheer amount of conflicting views . I have bought an awful lot of sharpening gear over the past year and although I don't begrudge it in all honesty I could have managed with a lot less . Sharpening a razor isn't as difficult as the terribly earnest guys on some of the forums would have you believe , but you do need a set of sharpening stuff which is a whole lot finer than you might have for your knives .
Anyone who wants to have a go at this way of shaving and are willing to take my advice then to save a lot of time and effort simply buy a sharp razor and a pasted loom or paddle strop.
Not all razors are sharp from the maker just as is the case with knives . So buy a razor from someone who guarantees to sharpen it for you and you will be able to maintain the edge with a pasted strop for long enough to get used to the art of using an open razor . You could do that with new equipment for around £100 in the UK and a good deal less if you use ebay and know someone who can sharpen . Got to be a guy who is used to razors though !! I am sure that the price would be somewhat less in the States . If I knew then what I know now the whole operation could have been done a lot cheaper , wouldn't have been as much fun though.
Oh yes the answer to the question I get asked most frequently is, I have cut myself three times and none of them were at all serious just about the same as I used to do with a disposable .

I am still just amazed at the number of older razors, still in fantastic shape out there.  I suspect there must have been many razor collectors early on (1920-1940).

John, I was imagining the noise the thinner razor is making, I don't think I would like that.  Seems using one of these razors should be a time of peace and tranquility..unfocused could be rather bad

Thanks Dale , and your kindness helped the collection to grow in quality !

Thanks Jan , it has been an interesting trip that only started in February . I have learned what appears to be an awful lot about razors and sharpening in that time , though I am sure there is a long way to go . If this helps others to see that it isn't as scary as you may at first think and if I can revive some old razors that craftsmen made some years ago then anyone else could do the same .

You are right Allan , an unfortunate choice of words !!

Ha! I know what you mean by "as long as the razor is in good nick" - but I see nick, and razor in the same sentence and think of my neck and face, and I'm somewhat of a coward ... :-)

Lars Ray replied to Nicholas oliver's discussion I have a rather large buck knife that is really awesome.
16 hours ago

Featureddead_left_knife_guy replied to Nicholas oliver's discussion I have a rather large buck knife that is really awesome.
Saturday