One day little eyes will look over my knife collection with awe and wonder, kinda like I did with my Grandfather's collection when I was little. A tiny finger will point to a knife and a small voice will ask, "tell me about that knife"? My eyes will probably strain to see exactly which knife has drawn the curiosity. "That knife"? I'll start with a grin on my face, a story will follow. At times those stories will be boring and at times there will be more behind it and by "more", I mean a person.

In my life I have enjoyed knives that are custom one of a kind works of art, I've had rare and vintage beauties that are sought by collectors, knives with fine scale materials and exotic steels... At the end of the day it will mean nothing if I can't tie a good memory to it. Knives have no race, creed, religion, or agenda; they have an origin and an end, ALL knives do. We as collectors have the ability to deem a knife worthy of our collections, or not and so opinion makes the knife world go round.

I'll be honest, when people ask me what my hobbies are I don't lead off with knife collecting, especially when I'm talking with my generation. Some people just don't quite grasp the fact that you can be a knife nut and not an actual nut. So the people who know I like knives know me, I'm comfortable with them.

A while back I started talking to this young woman at the church I attend on Sundays. When I first met her she had lost her phone, but it was only after I had cleared the chairs where she was sitting that she realized her phone was gone. I felt at fault for her phone vanishing and made it my mission to recover the phone...(Her mom had it the whole time) I had no luck of course. Anyhow, we started talking shortly after that and in no time we have become best friends. Like me, she has an old soul, so we are able to sit in rocking chairs and shake our heads at the rest of the world... not really, but something like that. I shared with her my interest in cutlery and to my surprise she didn't call the cops, she did however take it to heart.

So a while back she mentioned, "this knife" that she got for me. I was taken back and had to make sure what I heard was right. She told me that she had gotten me a knife a while ago, but was afraid to give it to me because "it wasn't good enough". "How could that ever be" I thought to myself? How could a knife ever fall short when so much thought was put into it, she saw it and thought immediately of me... that makes it good enough. A day, or two later she gifted me a prized jewel. 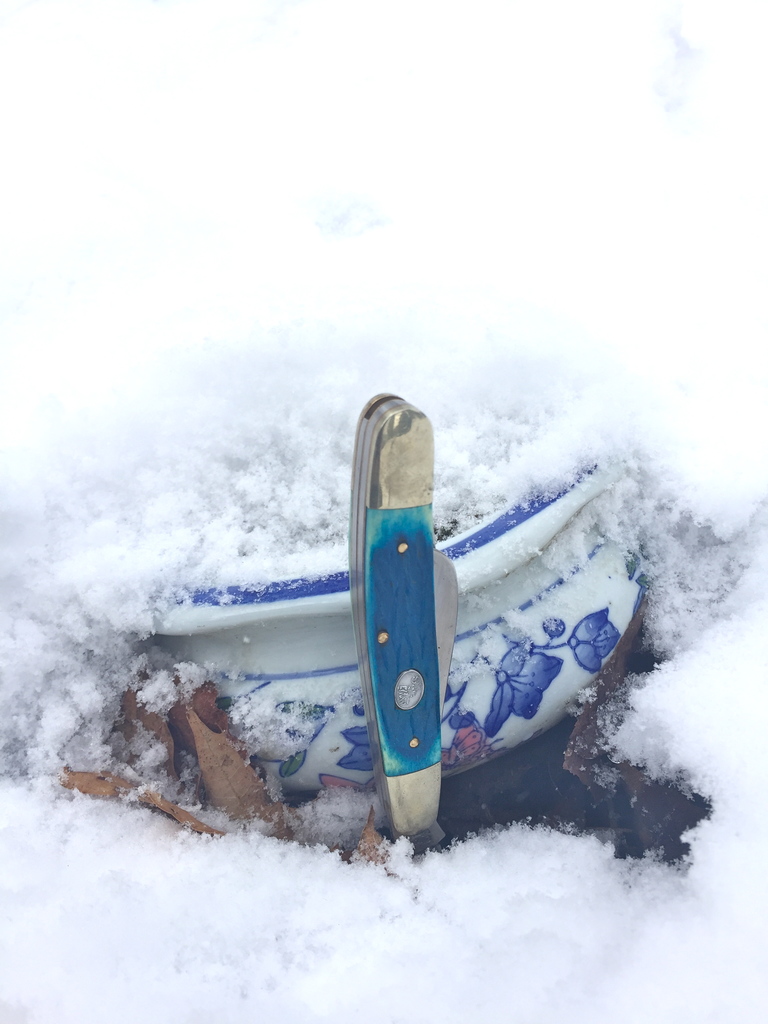 When I slide that knife out of an old felt roll, I'll place it in those tiny hands and I'll remember..... That Knife.

I agree completely with the sentiment in your story.  If someone gifts me a knife, or if it's a family knife, those have to most meaning.  I have given my grandson 3 knives and I know they are among his favorite knives.  It's not just an object, it's memories and sentiment and all that stuff.  I always have my IKnifeCollector knife calendar up at work and people notice it and see knives in a new light.  I usually try to have a knife nearby to show them how amazing knives can be.  The one thing I need to do is to start taking photographs of them again.

You all know exactly what I mean!

It's a Steel Warrior branded knife, not a collector's piece, but a knife that holds a special place in my collection. In all honesty the knife has some really good Fit an Finish too! It's amazing how many feelings some bone, steel and brass can hold...

Great story once again Johnny! And so true at least to me, My most treasured knives are not high dollar knives, They are knives given to me from my Dad that were knives he used to carry. The knife my Dad carried when he passed away is in his jewlery box and still has the lint from his handkerchief in the liners. Priceless.

You are so very correct.  Sometimes the value is the memory and thought

There are many knives I won't collect because they are "cheap", have a bad reputation or are just plain "junk". However...once someone not into knives or doesn't have my reservations sees one of these, thinks of me, buys it and presents it to me, thoughts and feelings are now involved. This adds a value to the knife far beyond cheap and junk. Suddenly that poor quality knife is one of my favourites in my collection. True sentiment adds something beyond monetary value.

That is the kind of knife story that makes us all remember a special one in our collections.  It also makes me smile that you have a female friend that can appreciate that you are a knife nut not just a nut LOL!  I cannot read the shield but the bone is just stunning

Great story Johnny!  A story like that makes any knife a prized possession.