Notes on Building a Knife Collection

Like many (but certainly not all) new knife collectors, I started my knife collecting focused on fixed blades -- why would anyone bother with folders? I thought -- it's not like anyone's going to carry those really expensive art pieces anyway, and who would even use a knife that cost more than $100 when you can get the same work done with a $20 Kershaw without worrying about chipping something like S30V?  Besides, you're paying more for a folder when it's just a knife that's "pre-broken" by the manufacturer...  But it wasn't that I was against folders -- not at all -- I just really preferred fixed blades.  And since I wasn't likely to be carrying these things on the daily (I live in a major city with all the social & legal & practical aspects of a major city), I figured I should just buy what I want to buy, & purchase knives for carry & use separately.

And this is exactly what I did.  I should note that I had acquired several knives throughout the course of my life -- some practical (a Schrade liner lock that I kept in the seat bag of my bike), some sentimental (my grandfather's PAL that he carried during his service), and some just for messing around (an old Imperial sheath knife with a plastic handle, & of course the "survival" knife with the hollow plastic handle that came with a "survival kit" inside).  But I didn't start "collecting knives" (which I'll define here as simply acquiring knives regardless of my intent to actually use them for any specific or general purposes) until after my first son was born.  It was pretty clear during my wife's pregnancy that our life had already begun to change, and that the prospect of going out even once or twice a week was not going to be part of our future for years to come.  I needed a hobby, so I started looking into collecting knives.

And since a night out could easily cost $50 to $100, I figured I was probably saving money buying knives instead. (My logic wasn't entirely developed here, but neither was my concept of knife collecting as a whole, so you can hopefully forgive me for not understanding how addictive knife purchasing could become, and how quickly & easily money can be spent in pursuit of the "next knife".)  At the very beginning, I was content with acquiring knives with interesting designs over pretty much anything else.  And since I was still looking at my collecting as a guilty pleasure, knowing an expensive new family member was on the way, I was content with purchasing low-end models from Kershaw & Buck, as well as some of the brands like Timberwolf and United Cutlery sold through BudK.

Since this was a way to focus my thoughts and use my time, I expanded beyond combing through catalogs & making purchases.  There were knife forums to explore (like iKC!), and knife magazines to read.  I started with "Blade" (as many people do), and found my way to "Knives Illustrated", and the publication formerly known as "Knife World" (now known simply as "Knife").  My favorite, however, was the now-defunct "Tactical Knives".  While each of these subscriptions was basically the cost of a knife for me at that time, I'd say I learned quite a lot from them, and it was an excellent way to keep myself from actually spending more money.  And I could read these publications while hanging out with my new son -- win!  And there were catalogs made by the manufacturers themselves, some of which were the pinnacle of marketing and lifestyle and photography. I often found myself moving from room to room with my newest knife magazine, whatever knife catalog had most recently arrived in the mail, and a notebook to keep thoughts in (including thoughts about future knife purchases).

So of course I started a running list of knives I wanted to buy someday.  I stated doing other knife-related things like what I will call "knife spotting" -- trying to identify certain knives used by characters in movies and TV shows (my favorite spot was the Uzi HD Defender in urban camo used by a character in the movie "Doom" (starring Dwayne "The Rock" Johnson) I watched as I was wrapping Christmas presents once, many years ago now).  And then there was knife throwing -- something I had always done, except usually not with knives, not until about 10 years ago or so.

From there, I started to participate in the forums, commenting on knives, and even beginning to write about knives a little.  I searched around and found a group of knife collectors that met locally, and I joined that group.  I felt like the odd man out (& I was, for various reasons), but I kept attending every monthly meeting.  The group published a monthly newsletter, and I started contributing to that newsletter as soon as I could.  By the end of that year, I was the newsletter editor's protege, and at the beginning of the next year, I took over as the newsletter editor & publisher, as well as contributing author and photographer.  This gave me a whole new perspective, a whole new set of responsibilities (which wasn't exactly easy, with a young child at home and a full time job already) -- and it gave me a point of relation to other knife writers and photographers, as well as makers and manufacturers.  I was even able to connect with some of my favorite authors, including Brian Griffin and Joe Flowers.  I spent the next five years developing my own knife writing craft (as well as photography), often under deadline pressures and budget constraints, as well as editing the writings of others (then getting it all formatted into a publishable newsletter & sent off both electronically and in hard copy).

Ironically, the first knife I purchased as a "serious" collector -- one that required a substantial outlay of cash on a single knife -- was a folding knife.  Specifically, it was the desert camo version of the Sog Trident with the half-serrated blade, complete with assisted opening and the Arc Lock.  Yes, this knife was made with a mid-grade steel, and the handle was some form of fiberglass reinforced nylon I believe, with one of the wobbliest blades of any production folder I've ever experienced, and it came in at around $65.  But I had never spent anything near $65 on any single knife before -- this was a serious step in my knife collecting process, and I would argue that this was the knife purchase that solidified me as a knife collector.  I'd spent months researching knives in the $50+ (but not too much "+").

In the years that followed, I came to despise the choice of the Sog Trident as my first serious knife collection piece.  It wasn't that it was a tactical knife -- I still like tactical knives, & I don't consider my still small sub-collection of traditional patterns as making my collection somehow less worthy.  And it wasn't that the knife only cost $65 -- to this day, that's not an uncommon price to spend on a knife, & I've only spent more than $200 on a knife maybe two or three times.  No, what led me to despise that Sog Trident was that as I held and acquired more folders, I was increasingly disappointed in the blade play of that knife.  The blade just felt sloppy.  The fit & finish on this knife just wasn't up to par with most knives, not just in that price range, but from most manufacturers.  It reinforced my proclivity for fixed blades over folders for years.

So then of course, as happens with us all, my ideas on collecting evolved, & now I buy more folders than fixed.  And for different reasons.  In the last few months, for example, my purchasing has skewed toward Cold Steel knives, just to pick up items that were manufactured before the company was sold off to a conglomerate / hedge fund last December.  And then there are the sub-collections, which is one of my favorite things to build -- it's like having various focused collections in a larger, unfocused collection -- the thrill of the chase often comes from these, at least for me.

And eventually, I came to appreciate that Sog Trident -- not just again, but in completely new ways.  It was light, incredibly sharp, and it fit my 2XL hand really well.  It marked a pivot in my knife collecting, and it allowed me to see areas of improvement that could be made, which is always crucial for advancing our understanding of pretty much anything.  And it was right there in my collection when I suddenly wanted to add more clip points to my collection.  No, it's not the hard-use folder I'd hoped it would be, but it led me to understand better what would make a hard-use folder.  And it's still the first knife I ever purchased for my now more-serious collection.  Besides, I just like it.  And that's really what I want to have my knife collection filled out by -- knives that I like. 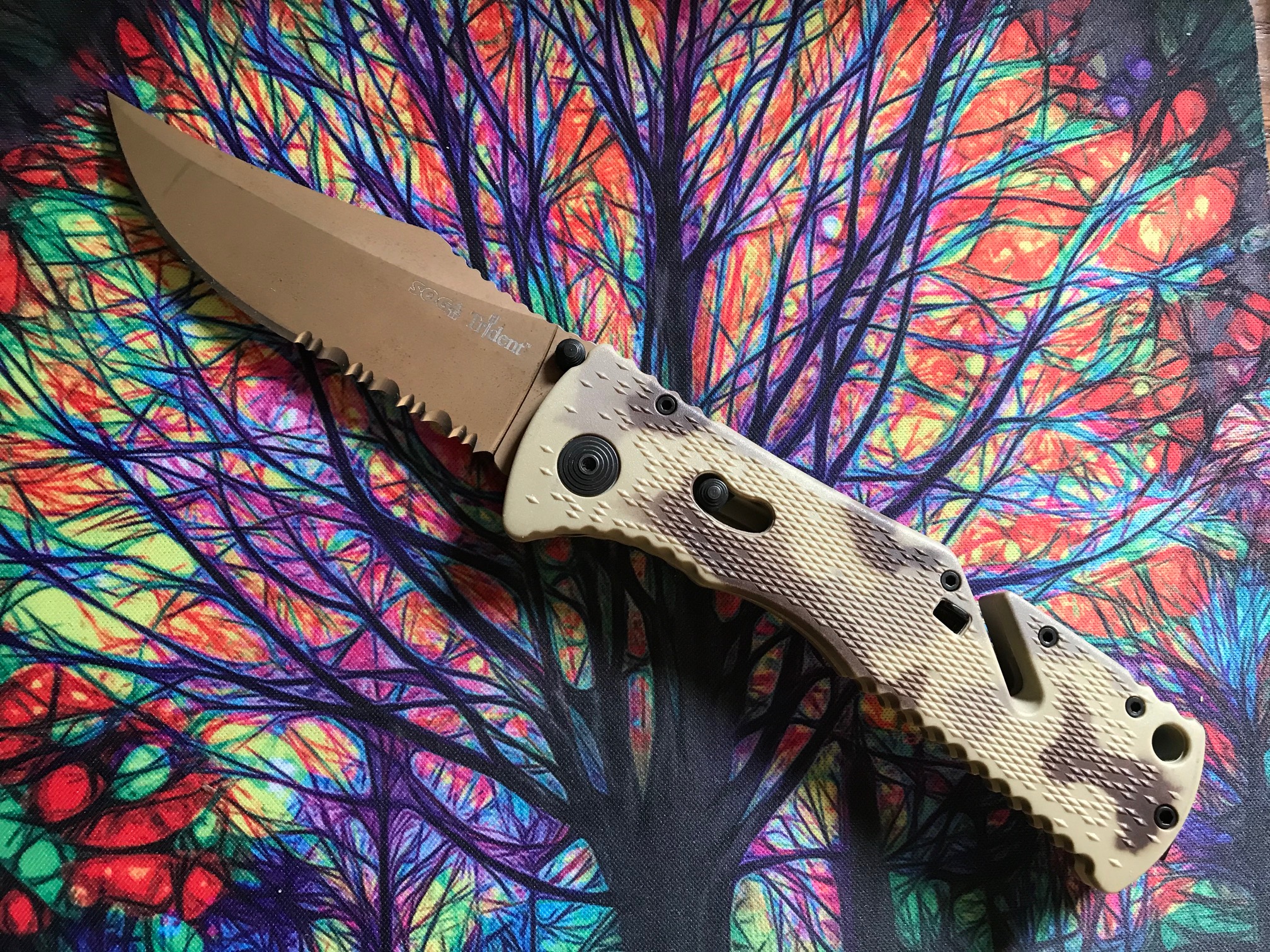