Did a little organizing!

On this 2020 Memorial Day weekend there is little else to do, so I decided to try and get all my knives into one room, I figured why have them if I'm going to keep them in a box in the closet. One of these days I want to get or make a few new display cases, more permanent ones made to fit the knives better, (like a store display-type box), but for now what I have will have to do. First is the big box which contains most of my Buck collection and includes every model number of the 300 Series made by Camillus between 1972-1986, with some 1966-71 Schrade-made Bucks also, including a first version 301 with lined bolsters. Add to that several Buck-made 300's of the 90's-early 2,000's, Actually I believe the Buck-made 300's made while they were still in San Diego are examples of their finest in-house work, newer ones just do not cut the mustard IMHO. I especially like the 310 Whittler, the 312 & 314 Trappers, one of each in bone one of each "stock", and also the 305 Clipper, (mine is Smooth Blue). I also have a custom little 305 with custom wood handles. My late brother's 1990 110 is in that box and my only two fixed blade Bucks are there, (2015 105 & a BCCI 101 with Carbon Fiber Swirl handles.). There are a few Case knives represented in there too next to one of my late brother's Craftsman in between the two Russlocks. on the bottom left Robeson, Primble, New York Knife Co, and those cool Camillus Congresses, next to that is yet another Camillus and two Case Nylon handled little Trappers that are pretty indestructible & even more Camillus including a #93 Marlin Spike. In the photo of the sheaths those are my EDC knives which include several Bucks, couple of 110's, a 112, a 426 & others, others being Crossman, Camillus, & Craftsman, (probably made by Camillus). My favorite of those in sheaths is a nice old Camillus #26 Hunter that is just plain cool. Under the fish tanks are a couple of Carhartts by Case and a Case Sodbuster. and other Bucks in sheaths. The boxes with glass tops are various flea market-yard sale knives I've picked up here and there over the years, one box for US, German & English-made knives, one for imports, mostly Chinese. Those two boxes are the knives I would take to sell at a yard sale or swap meet if I ever got motivated to do so. Across the room is the display mirrored box containing my Buck SFO's made by Camillus and sold only at SMKW, I have every model number of those that include all the Barlows, (one 332 Grandaddy Barlow in jigged Bone one in Jigged Delrin black, one in Jigged Delrin yellow & both 331's in yellow & black), both 322 Congresses, (black & yellow), all model numbers of Trappers that Buck/Camillus ever made, (329 & 334 W/ jigged Bone and is numbered, and the very rare 333 California Toothpick in Stagalon are also represented there. There are a couple of Swiss Bucks represented there also, plus an old US-made kitchen knife and an 1870's ink eraser knife. Oh yeah, my other fixed blades, my father's Kinfolks K380 Skinner he bought in 1926, and which he carried during WWII in the Pacific, (Kinfolks were made by relatives of the Case family, the brand ended up being made at the Case factory until the 50's), and the horse shoe knife I made at Jan & Donnie's forge at their home in GA, (a wonderful day that I will never forget). Next to those are tourist knives my daughters gave me, imports yes, but special to me anyway. There is also a Topper fixed blade with curved Sanbar Stag handles made in Spain w/ CV steel, which was stupidly expensive, but what can I say, I'm a sucker for curved handles!

I guess that's enough for now, if anyone has any questions please speak up. Have a great Memorial Day!! 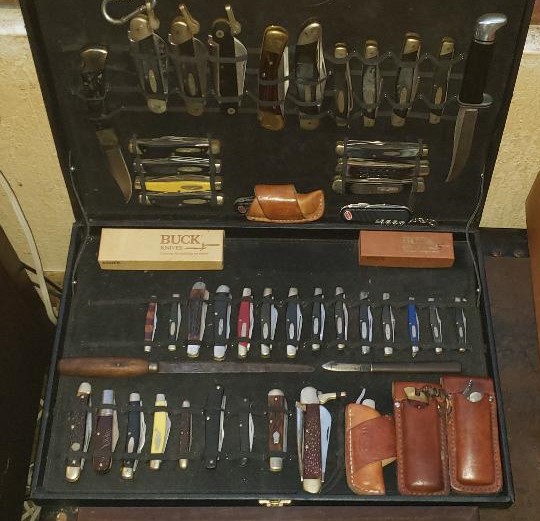 Thanks Jan, you do live a bi-level life don't you, and if you wanted to move that safe upstairs I would certainly have second thoughts about the "one room" philosophy.

Rome I have a yellow handled Buck not pictured that was a special issue with only 1k being made and I was lucky enough to find one, I like to carry it so it is in one of my sheaths, I'll take it outside tomorrow and take a pic of it and post it here.

I have to say that I love your collection, simply for the enthusiasm that drives your appreciation for each knife on it's own merits.  I tell people all the time that I have knives with zero monetary value but  worth more than I could ever explain to someone else.

That being said, i wish I had the umph to get them all out and in one place but on one floor of the house will have to do for most of them LOL

I wish I had a few of the yellow handled pocket knives that you have.  They

are as rare as hens teeth now days.  I missed buying when they came out

and still regret it.

The entire collection of bucks are beautiful.

I have been wanting to do it for awhile, I just don't like not knowing where everything is, and I actually think there are a few more hiding in a box or drawer somewhere.

I just don't have the energy to pull all mine out, from wherever I've got them squirreled away.

KnifeMakerJohn Burrell is now a member of iKnife Collector
Sunday
Welcome Them!