Here are a couple of Bucks that arrived today, two #112 Slim Selects, my new favorite for EDC, (I carry a #112 Slim Pro every day). This is a wonderful model for EDC, strong, affordable and nearly indestructible. The deep carry pocket clip is the best pocket clip I've ever used, and I have a few Case knives & others with pocket clips, not one of those come close to being as well designed, easy to use and secure as these; they are reversible too. Slip one of these into a back pocket and it stays right where you put it and is barely noticeable, highly recommended! As I already had one, (in brown Linen Micarta), I bought these to take advantage of limited colors of the the handles, (let's face it, quarantine is boring so shopping for new knives is one of the ways I keep my sanity), now I can color coordinate with either tan or green khakis, (plus I have a #110 Slim Select in blue so I'm covered for jeans too). Doesn't everyone color coordinate their clothing and knives?? Well if you don't, maybe you should, lol?

Just before ordering these I had an unfortunate experience on a knife club's Facebook group, (I won't mention the complete name of the club but you can probably figure it out). A member of the group/club had killed a harmless baby gopher snake that he had killed with his Buck #119 fixed blade, then proudly displayed it on FB with blood dripping off the blade. As a herpetologist, reptile house zookeeper, and former NRA member I just couldn't let that pass unnoticed and unchallenged. I asked why he had killed a completely harmless animal for no other reason than to show off, he and a few other members came back at me with vicious name calling, expletives and other inappropriate language, obviously approving of such immature and unsporting behavior. I reported the post to FB and the group admins for animal cruelty but nothing happened, not even a word from people I had once considered friends. Apparently the widespread hatred, illogical mistrust and ignorance about snakes has continued and even expanded, such thinking is a real shame and a pity. Keep in mind I was an avid hunter when younger, but I never ever killed an animal that wasn't going to be used for food, to me that is just plain unsporting, in fact I was taught by the NRA that such things were indeed unsporting. After no response from administrators or FB I deleted my post from the group, then asked to be removed from the FB group altogether. I have considered withdrawing from the collectors club also, their lack of response indicates that they must approve of such unsporting behavior, because they took no action or said anything about it at all. Problem is I am right, completely right, so no matter what is ever said I will always know that. I'm sure every ethical hunter would agree with me on the senseless killing of animals for no other reason than ego, because folks, it just ain't right no matter how many names you call me. 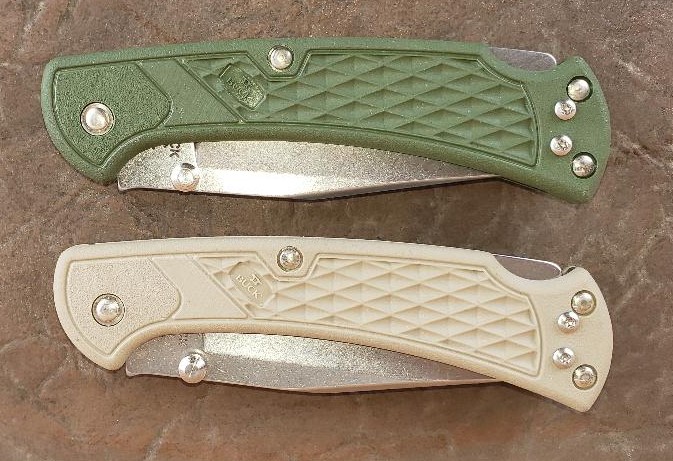 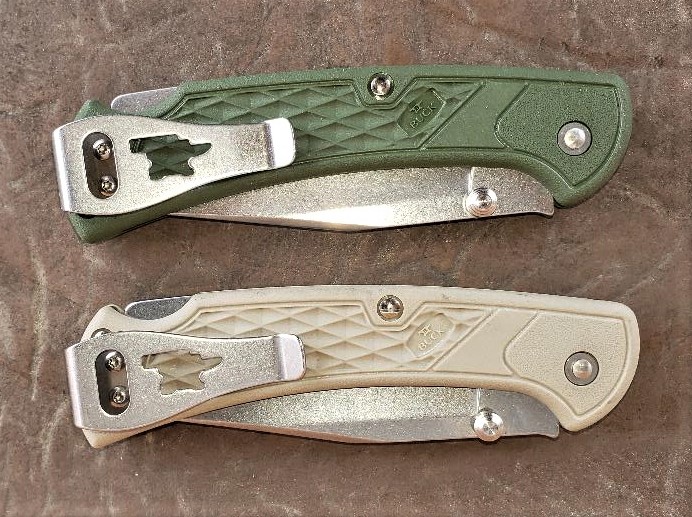 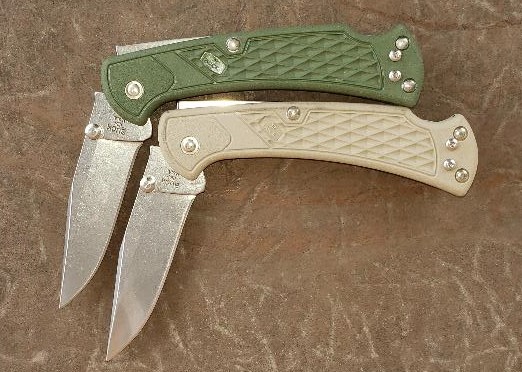 Well, I have a 112 Slim Pro with Linen Micarta handles, and it is my all time favorite EDC, feels wonderful in the hand and the steel is S30V. Go to the Buck website, scroll down to the links on the bottom and click on "Pro Program", fill out the form and wait to see if it is accepted. If you are approved you can a discount off thr retail prices listed on their online store. I qualified so maybe you can too, that will make getting a Slim Pro a little less costy. I also have 3 regular 110's, plus a Slim Select 110, but I prefer the 112 for everyday carry, their size makes them much less cumbersome.

I save the 110's for outdoor recreational activities, plus I have one of each made in my kid's/grandkid's birth years, and one that belonged to my late brother, otherwise it's 112's most of the time. I also usually carry a regular  1970's 112 Ranger in a belt sheath, the Slim Pro in my back pocket. I then also carry either a Buck 305 made in my daughter's birth year, (1993), or an old 1970's Craftsman Stockman in my pocket, (also Camillus-made). The 112's fit in the hand better, and are much easier to carry than a 110. I think I need to slow down the knife buying a bit though, I need a new PC and need my car worked on, so knives have to take a back seat for a bit, (a short bit I hope). Thanks for posting and thanks for the support.

Syd, I'm with you on both counts.  Killing for killing's sake is simply wrong.  And I'm a 112 fan myself -- I like the 110, but it's too popular to feel special.  Granted, the 110 has been around ALL my life, it's ubiquitous & it set the standard for lockback knives -- but all the cheap knockoffs have also hurt the 110's image for me, even if unfairly.

I don't have the Slim Select 112, but my collection isn't complete yet!  But then there's those Micarta models -- I can practically feel my wallet getting lighter already...

Thanks Jan, I was surprised with their reaction and disappointed with the club for silently supporting them, (which is implied support for those who kill needlessly), kinda took the shine off of all my Buck collection. I think I'll be collecting in a different direction now, not sure which direction but one with cool sharp things as the focus. Maybe I should begin collecting Case knives instead?

When I hunted I made sure the animal was killed cleanly, and always made sure it would be utilized by someone. I did a lot of dove hunting, but I dislike the taste of dove, (all dark meat), so when I hunted them I already had folks waiting to receive them after so they could eat them, (sorry, but dove & pheasant tastes like liver to me, but quail and cottontail are yummy, deer is good if cooked right). I even ate some antelope my friend shot; liver again but I ate it anyway to not waste it.

I carried the tan 112 today, a bad taste in my mouth about the collectors club doesn't affect the knives usefulness, I will just look beyond Buck from now on.

I am so sorry you had that reaction. You know me and you know we hunted when younger also but only for food purposes.  Even when fishing we have always taught the kids and grands, you kill it, you eat it.  Kept alot of fish out of the boat lol.  Don't sweat it too much my friend, we can only be responsible for our own actions and reactions.

They are some GREAT knives!

Beth, we keep mothballs around the perimeter of the property to keep the rodents away, they stay away the snakes wont stop here, just pass through on the way to the lake in the spring.

Nice knives and color coordinating would mean I get to collect more knives, great idea!!

I am with you about the unnecessary killing of animals, people that do it must get off on the power.  Just so you know, the other day we had a Copperhead in the front yard.  My husband and I looked at him and just watched him for a bit.  We noticed how fast he moved.  He went about his day and we went about ours.  We had no reason to hurt him and he eats vermin that are around.

Yeah, I have to agree, between the two I like the tan best. These are limited color versions, better grab one while they last.

That tan one appeals to me.