I have been in a rut. A real bad one. I look at my knives and I just don't get a kick out of them like i used to.

We took off last weekend to look for knives. I figured they would be a few that would just beg me to take them home. I found a few that where good buy's but not the sack full like I usually find.

Well I think I finally found out what is bugging me. I have been buying 4 to 8 knives a month for a year or 2. So I had the wife help me and I went thru every knife I own. 3 piles 1 to keep 2 to sell and 3 to think about. The pile to sell grew pretty quick.

All I have to do is sell a few and save a little. I think I have a plan that will work and still put a little excitement back in my knife hunts. I have a direction now for my knife collection. Mike, I like that "Collect what you Like and Like what You collect,"  I have basically done that even when I had no direction to my collecting.  I bought knives because they appealed to me.  I still do that even though I am now more focused on what I collect.  I have never collected with the expectation of making a profit.  I have recently become a serious Case collector.  I joined the Case Collectors Club and even signed my 22 month old grandson up as a Junior Member.  And lately have added several Case knives to my collection.  But I will still collect other knives that appeal to me.  For instance lately fish knives have appealed to me.  I now have three and plan to get more.

I like what Charles said. " I sort of backed into being a knife Collector".  I wonder how many people got into the Hobby like that?  When I was a Teenager in the 1960's, I used to buy & trade a few knives along with some guns, BEFORE the Government got into the Act. Then I got married, and left that behind till the very early 1990's.

While working I noticed the knife display in a few Stores that I visited in my job, and as time went by I started to buy knives, mostly Caes, Boker & Schrade from the different displays, all where new or early 1980's.   After a while I discovered their were ACTUALLY knife Dealers, Sargent, Parker, SMKW & local Gun & Knife Shows. I learned and that their were older knives out their for the buying that were in new condition.  I bought Books and Read, Studied, Educated myself and when I went to shows my Books went with me to determine a fair price for knives. In one of those Books I read what A very Wise Man once wrote.  You should plan what your going to Collect before you just start willy nilly buying.  He also said that you should collect what you like and like what you collect because to turn a profit you may have to hold on to it for a while. I was like many others I had an abundance of knives with no direction. I also found Ebay!!   I bought on Ebay and I also  Sold ( gave away many)  knives I had purchased before from Stores and before I bought the Books because they didn't fit my collection and i did not want to wait to get what i could out of them..  AFTER  I determined a direction to go in collecting.

I decided that I wanted to collect Near Mint to Mint knives.  At that time I also determined that the 1965-69 Case XX U.S.A. could be had relatively cheap and many could be found in near mint condition, were likely not being Counterfited, had Pretty Bone & Stag scales and were mostly packed in 6 count Pumpkin boxes.

I did at one time set out to collect 1 of each pattern manufactured during this time frame  but then decided that some I did not care for!   I also decided the maximum I would Pay/Bid for a particular pattern and stuck with my plan.  I will add their are a few patterns that I would like to have in my collection,  but the price is just more than I will spend.

I also was introduced to the Case Classics through SMKW and Parkers KCS.  I collected them in Stag again setting out to have 1 of each pattern  made in Stag but also finding that some were not as collectable as others and would be less likely to increase in value. Again I sat Max $ and stuck to my plan.That was before Stag went sky high due to the embargo. I still lack a couple!!  Funny but it used to be that a Stag Handle was not a lot more expensive  than Bone, tmes change!

Later after I had bought a couple of the Big, Jumbo, Bullet, Mountain Man, 23 Pattern, Trappers I found I liked them, I now look for that pattern, any Blade configuration and Handle material, Manufacturer, IF I Like it.

That Wise mans word still reverberate in my mind before I bid or Buy a knife. "Collect what you Like and Like what You collect,  BECAUSE you may have to hold on to it for awhile to get your money back or turn a Profit.

Lee, those are two beautiful knives - you made excellent choices.

Comment by john garcia on July 10, 2013 at 1:23
Great idea i bought lots of cheap knives but never owned a nice one. i have a boker whittler and a case jack both with carbon steel. never used the boker. if i ever learn to sharpen i will use it. one day i would like a gec whittler.

Funny we began trimming the purchases about a year ago.  We still fill holes in some of the groups we had been buying but we are down to short runs, collectibles, customs and a few that just catch our eye.  OK we didnt slow down much LOL

My money tree wishes I still don't get the kick out of knives like I used to! LOL! The problem is, the kick I get is bigger than ever and getting bigger! Help.

Lee, I know what you mean by now having a direction to your knife collecting. I sorta backed into being a knife collector, I was haphazard and random about it for several years.  I had about a hundred knives but only a few were what most people would consider collectable.  And most of those were given to me.  I had one Case, a Christmas gift from my son and daughter in 2004.  Then in the last couple of years in trips to SMKW, I picked up two more Case knives.  In the last few months I have decided to focus most of my attention on Case knives and upgrade my collection.  I now have a total of eleven Case knives and will pick up one or two more at SMKW next week.  I won't buy exclusively Case but they will be my main focus.

I think the wife likes that one as much as I do. lol

I bought a natural bone backpocket and a buffalo horn small saddlehorn. 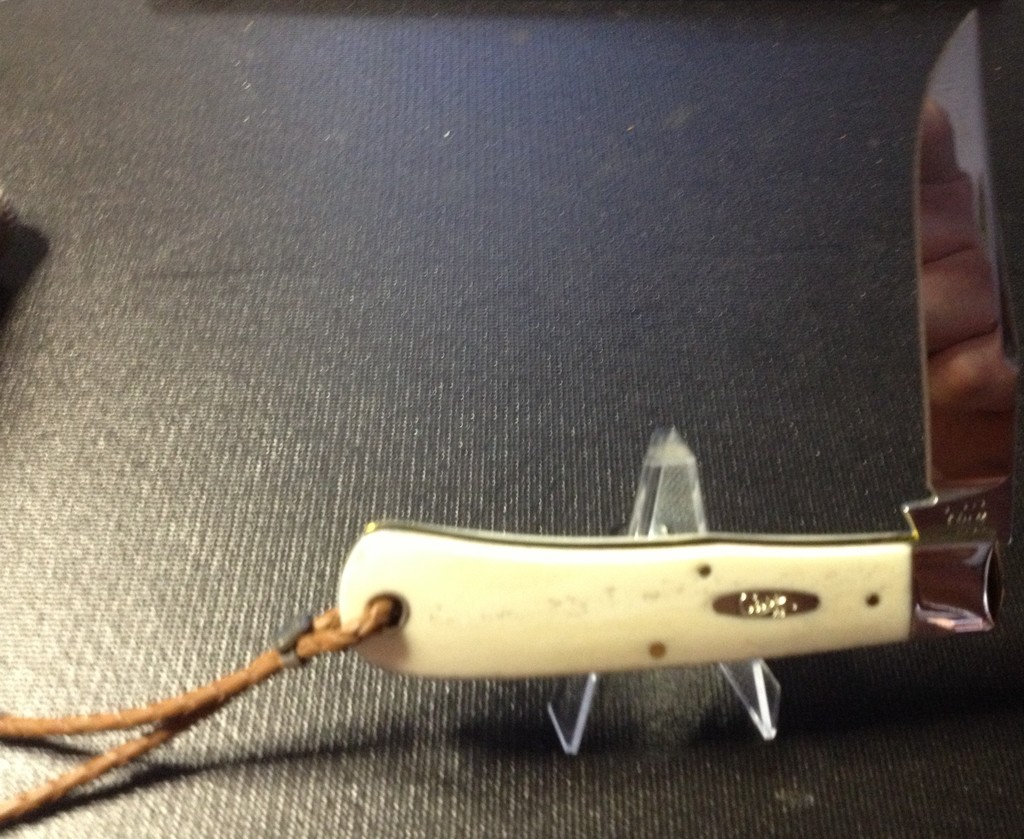 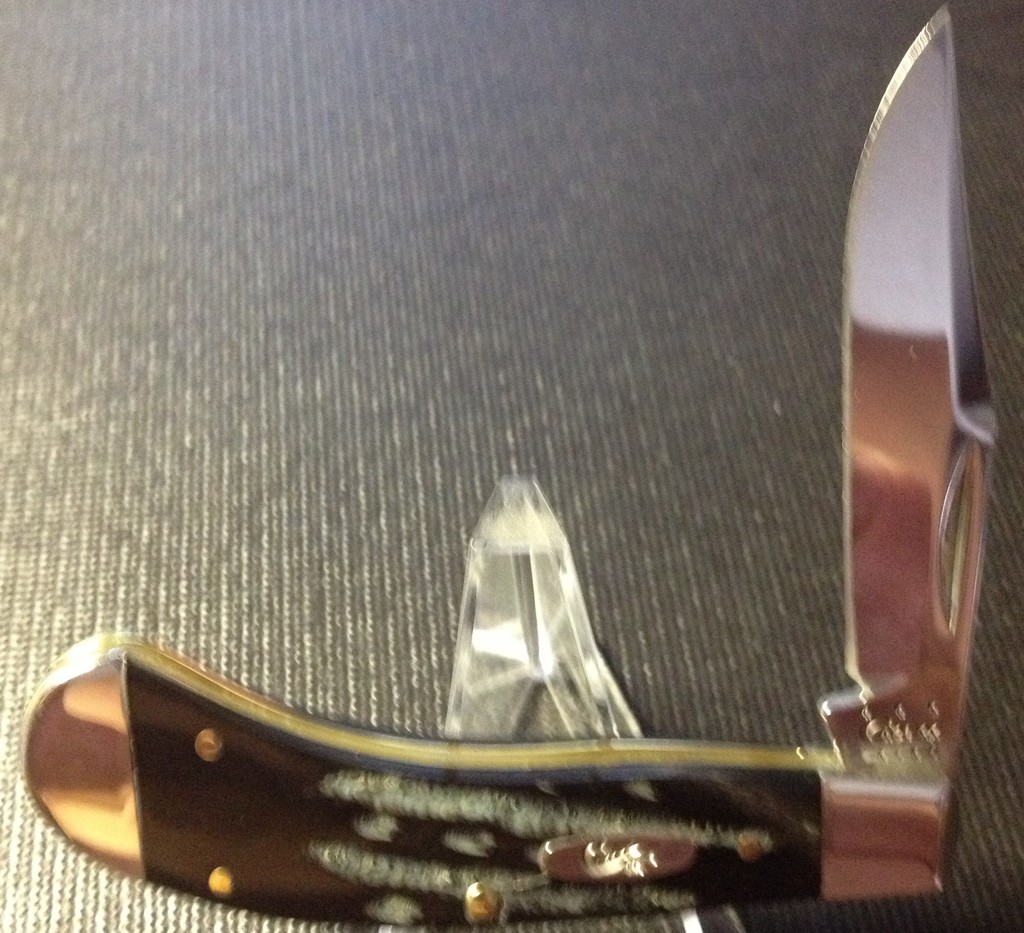 Jan Carter left a comment for Bryan w
14 hours ago

Chad Rommerdale is now a member of iKnife Collector
yesterday
Welcome Them!

FeaturedJeremy B. Buchanan left a comment for CESAR SCAVONE
Wednesday