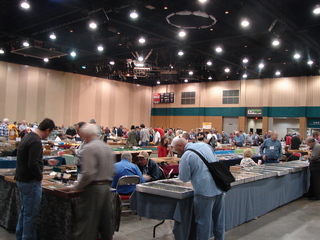 Due to contraints on my schedule I don't get to many knife shows during the year, but this weekend so far my schedule is working out to go.
When I first started collecting knives, I just didn't get it. No, I didn't get knife shows- not at all.
Honestly, I just thought they were for a bunch of old timers who traded knives among themselves.
But, I gave them a try- and got hooked!
Knife Shows are a blast. Sure you'd expect to see thousands of knives, but something you might be suprised to find it is....really nice knife folks.
Granted I see iKC as just that- one big 24/7 knife show, but sitting down and putting a face with the name is taking knife community to the next level.
The long and short of it is, this weekend I'm headed to the National Knife Collector's Asso. N. Georgia Knife Show. It'll be my third trip to this show since I started attending.
Let me encourage you if you've never been to a knife show, or don't quite get it yet- go on anyway.
Good people. And loads of fun....provided you cleared being able to go with the homefront before you left :-)

Comment by Gary Kennedy on March 15, 2010 at 11:50
It's the only place I know of that you can get first hand knowledge of whatever knife you have or one you would just like info on. The dealer's are usually the most honest people you would ever meet. They want a repeat customer. There you can see in person what you are buying and sometimes find out a little bit more info.