Having recently endured a cervical vertebrectomy, (removal of discs and bone, replaced with bone grafts & SS plates leaving my spinal cord exposed until the grafts grow in), I wondered if the surgeon had cut out the part of me that addictively purchases collectible pocket knives? I got my answer today with the arrival of a 1990 Buck #314 Buckbone Trapper. My neck seems to be healing up well, but the urge to practice retail therapy remains. I already have a #312 Buckbone Mini Trapper from the same year, so to my diseased mind it only made sense to obtain a stablemate for that knife. In my opinion the 1990's were the epitome of Buck's in-house production, so lately I have been concentrating on that era in my collecting. As opposed to the earlier Camillus-made 300 Series models which were good but not spectacular, (flat ground blades one and all), these in-house versions had beautiful hollow ground blades and were of splendid quality in every aspect. Buck made several models with the "Buckbone" moniker during that period of time, and eventually I would like to add as many of those to my collection as I can, (there were #305 Lancer, #303 Cadet, #309 Companion, and #301 Stockmans made in Buckbone during that era also). Buck changed the blade grind and construction methods of their in-house 300 Series models in the early 2000's, but in my opinion their very best work happened in San Diego during the 90's.

As you can see there are slight differences in the color of the bone between the two models, but that is to be expected with natural materials like bone. Both of these knives are in perfect condition with no signs of wear to be found anywhere, and both are factory sharp. Both of these will be behind glass in a case on my shelf with my Buck SFO's.

Well, as I sit here grounded from even riding in a vehicle for a couple more months, (to protect my spine as bone grafts grow in), I will try my best to not go broke buying knives off of the internet, but as I found out today that part of my anatomy wasn't removed, so I guess I'll have to practice some discipline, (ha, yeah sure). Here are photos of that beautiful new knife and a family photo with it's little brother. 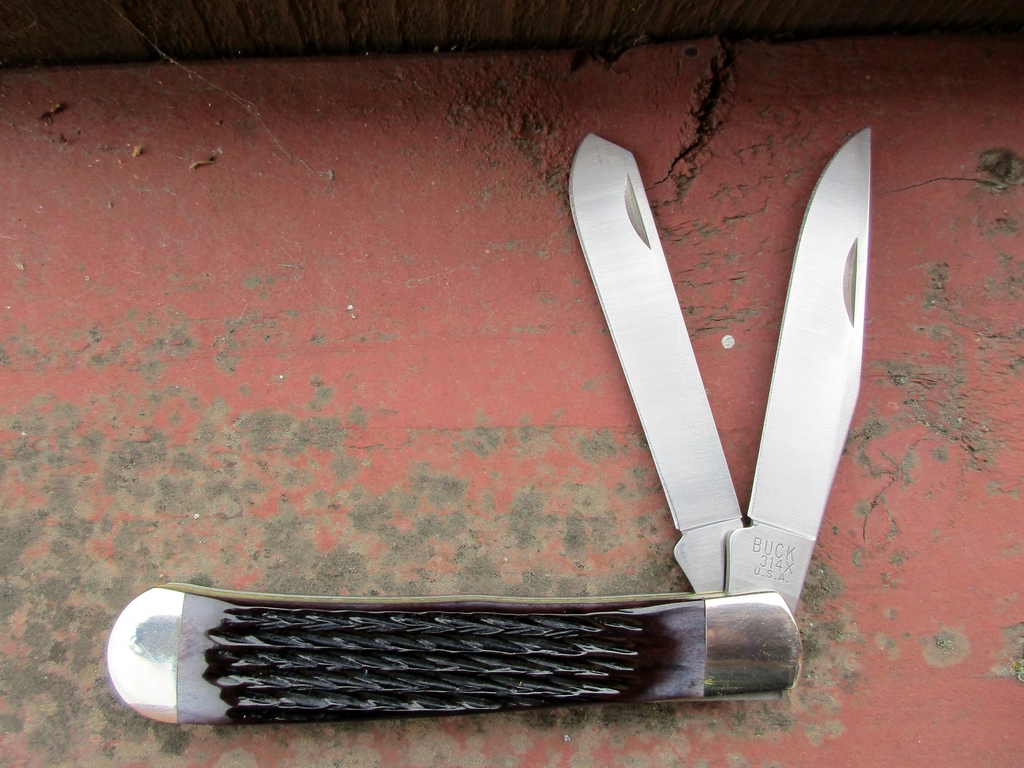 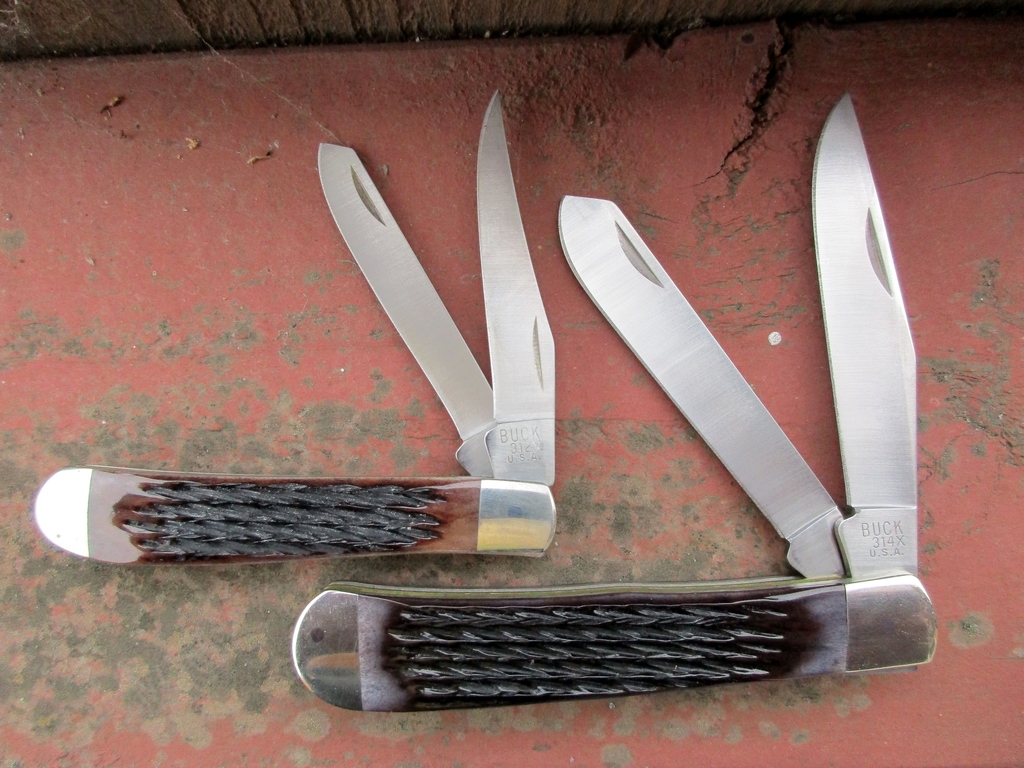 Cyd,  ALL Very Good Looking Knives.  Hope You find the Other'z to Complete Your Collection.

Here is the other #329 Freedom Trapper, this one with graphics. These originally came in a gift tin, but all I have is the knife. Believe it or not I still have at least one more Buck Trapper to go to have a "set". I need a #334 Millennial Trapper in Smooth Black Bone to fill out that collection, then a Genuine Stag version of the #333 California Toothpick to finish off the SFO's.

Here are the other Buck Trappers I have, #311 Slimline, #312 Mini Trapper & #314 Trapper in Black Sawcut Delrin, (ie; stock), & SFO's #329 Freedom Trapper in Smooth Yellow Delrin, & on the bottom a #334 Millennial Trapper in Genuine Stag, (serialized). I also have a #329 with graphics on both the blade and handle, but can't find photos of that one, I'll remedy that and add it to this later. 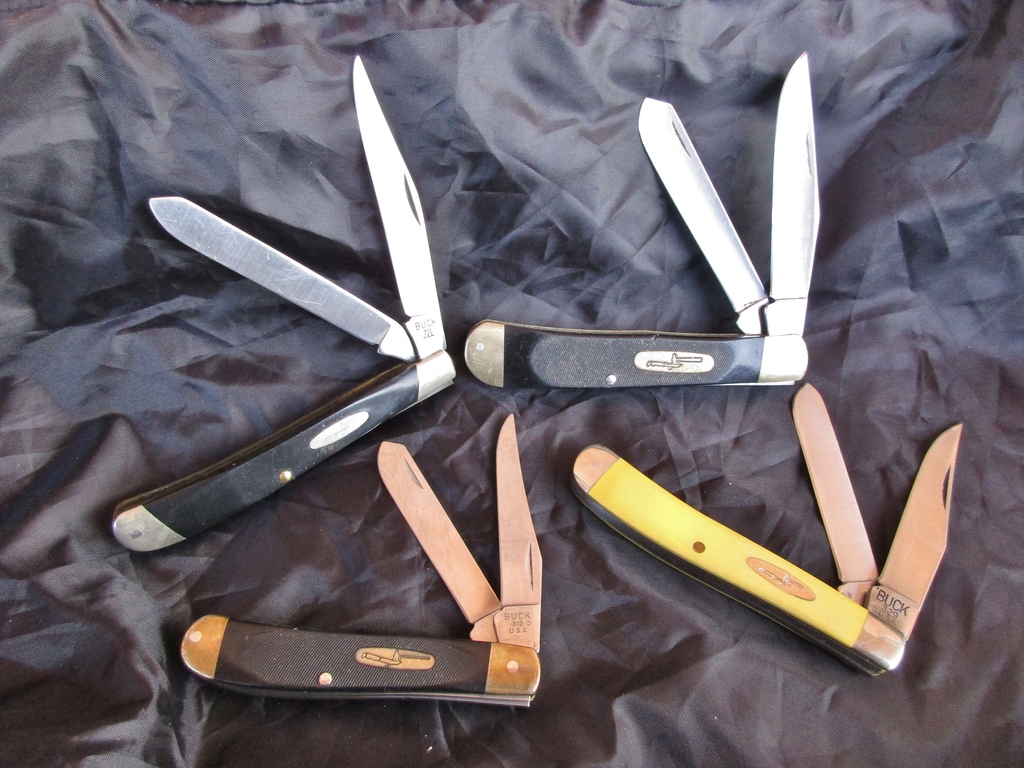 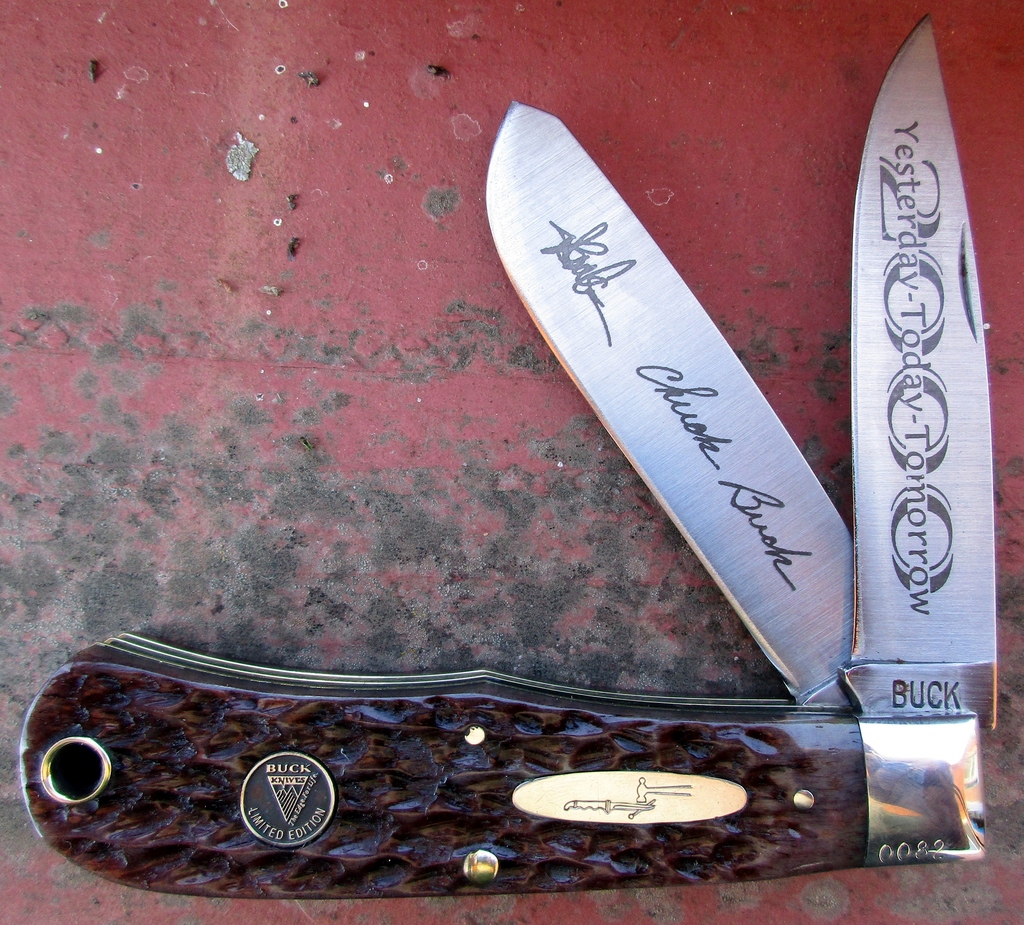 Week three of recovery goes well, at least for now I'm relatively pain free, (as far as my neck is concerned), which actually takes some getting used to after decades of agony, so thanks to all who have offered prayers and good wishes.

Thanks Jan, and sadly the impulsive desire to purchase pocket knives remains unaltered by the surgeon. I'm just thrilled to have both Trappers in Buckbone, (as well as Sawcut Delrin btw), and yes they ARE awesome. I seem to be stuck on the 300 Series made in San Diego in the 90's lately, so I am currently focusing on the Buckbone frames, (especially 300 Series though other frames came in bone too during that period). I think the Buckbone knives made then equal or surpass anything Case ever produced, and were far superior to their current production. I have no idea why, but those 90's knives just rocked with fit & finish.

I gotta stop now though, I have a daughter & three yr old grandson to get gifts for next month. Since they are eventually getting all of my collection I can't see buying then anything cutlery related, so no more knives until 2018.

My biggest hope for the holidays for myself is simply to be able to ride in a vehicle again, this being confined to home for months really blows, can't wait for this to be over. At least the pain level is manageable, but this sitting around just healing up really sucks.

LOL, ok so they did not take away the part that wants more knives and your assuming they put some discipline in the graft??

William F. Grizzell is now a member of iKnife Collector
18 hours ago
Welcome Them!