Well, I've not been that active in collecting knives the past year, but having had two major surgeries and concentrating on trying to pay off the knives I had purchased previous to a year ago has kept me otherwise occupied; until today. Having been pretty much confined to home most of the year got the best of me today, I was feeling good, and was done with the major event I put on in Big Sur annually so I decided I needed to get out of the house and me being me I chose to go on a thrift store crawl. After finding no fewer than four good pairs of cargo pocket pants, a nice hawaiin shirt and a NIB transistor radio, (a stellar day in my junkin' world). As I went to leave that last thrift store, (of the four I hit today), I noticed out of the corner of my eye that there appeared to be some pocket knives in a display case, something unusual as I have never seen a single knife at that store before today. There were four US-made folding pocket knives staring back at me, which turned out to be a Queen Steel Slimline Trapper and three various Colonials. They wanted $7.95 each for them and after giving them a once over I decided to buy the Queen Steel knife, as in my mind it was in the best condition of the four, (the Colonials were all carbon-bladed and a bit rusty). I figured $8 for a Queen anything was a decent deal so I popped for it. I'm going to sleep on the other knives, I think I'll go back in tomorrow and offer them $20 for the remaining Colonials. The Queen was the first of that brand I had ever seen in this county and was in good condition, full blade, still sharp and snappy, with jigged Delrin handles in a pattern I'd seen online on other Queens, (Barlows mainly). I thought at first it had a SS blade, but after closer inspection I found a few pits on the blade so I now think it might be carbon. I'm not sure of the model number, but I think it was well worth the $8 I paid whatever it is. While I commiserate on whether to go back and buy those three Colonials here are photos of the Queen, (the only Queen stamped knife I have, though I have a Trestle Pines Barlow that was made by Queen). Decisions, decisions, three Colonials for under $25; should I or shouldn't I.....?

Well, whatever I do tomorrow I guess you could say I was back collecting knives, not that I can afford to continue collecting knives, but since we all agree it is a type of addiction I guess that's all the justification I need. Stand by, there may be photos of three Colonials here tomorrow, and after all IT IS an addiction isn't it??? 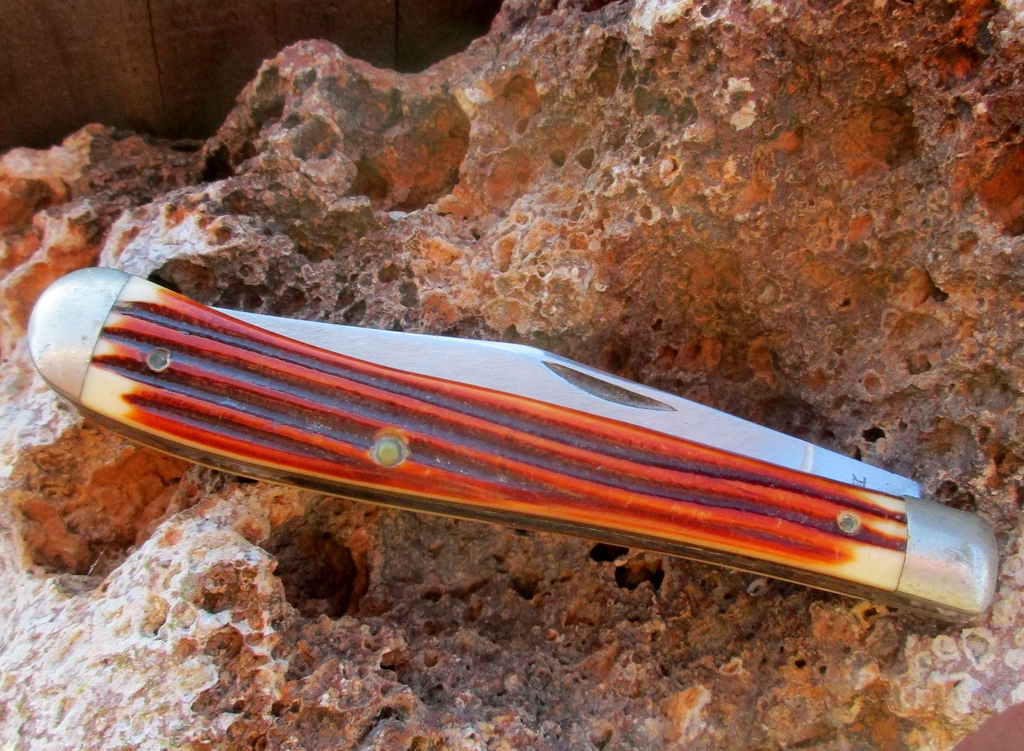 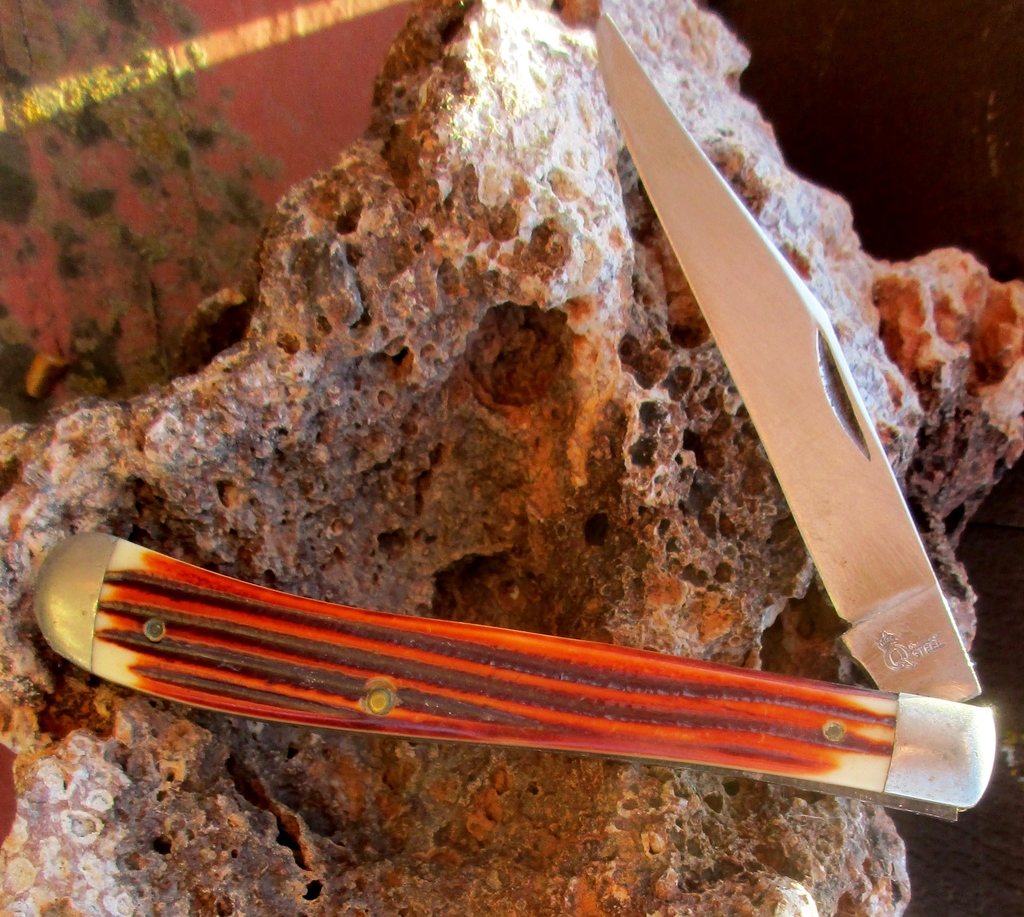 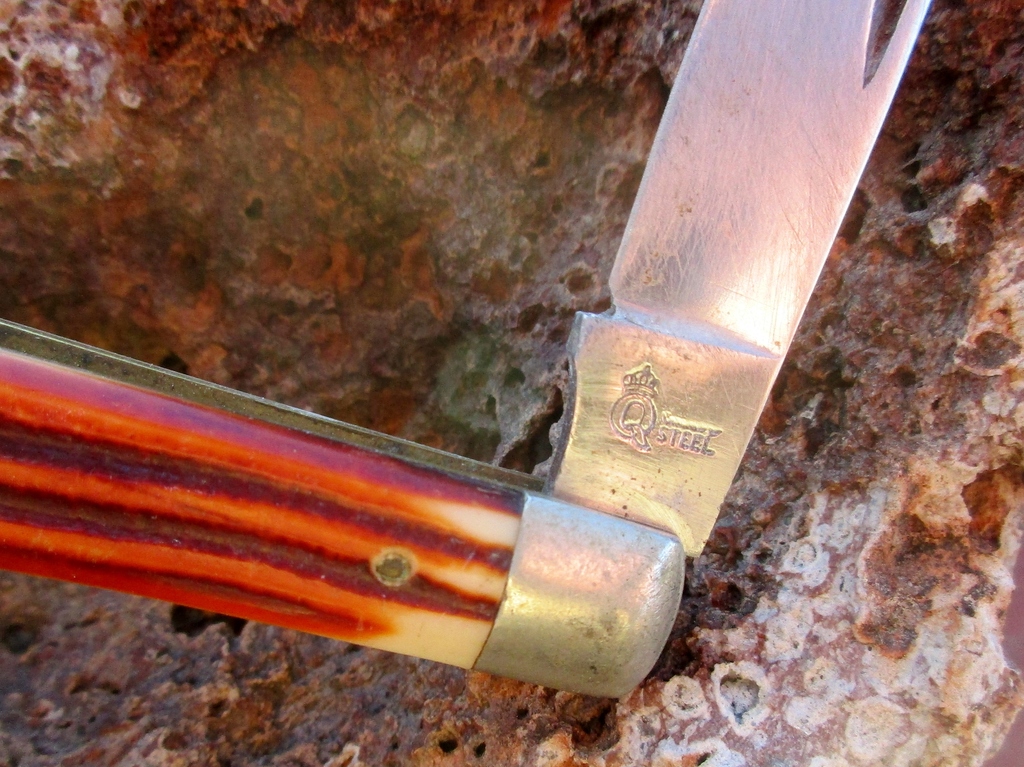 I posted these photos on the Buck Group, but think I'll post them here as well.

Just received two Buck 112 Rangers, a Slim Knife Pro and a Slim Knife Select, they are both simply awesome. I think now after a few days with them that the blue Select will be gifted to my step-son who is active duty USAF, and I will keep the Pro. I have just fell in love with it, it fits perfectly in the hand, and being from the "Pro" series the fit, finish, materials and workmanship are the very finest. The clip is very well designed too, it is the only knife I have with a belt/pocket clip that doesn't snag when trying to remove it from my pocket/belt, yet it stays firmly where it's put when clipping it on, and is VERY easy to clip on as well, (something I can't say about my Case Mid Folding Hunter, I have ripped pockets trying to get that one to let loose). The Select has Buck's "stock" 420HC blade, and the Pro comes with S30V steel. The Pro also has a larger spring than the Select, though both work well, the Pro snaps closed with a very pleasing sound that verifies it's pedigree as a "Pro" knife. The Canvas Micarta handle is not only beautiful and durable, you can feel the grain of the canvas but it feels ultra smooth all over at the same time, very pleasing to have in the hand. I have never carried a knife which retails for this much as an EDC, (I got a substantial discount due to my BCCI membership though), but this one is so nice I'll want it with me daily I'm sure. Frankly it will be pretty indestructible, so despite it being pricey I'm gonna use it. Check the Pro knives out on Buck's site, they are all worthy of a look by anyone who appreciates a well made US knife. Bravo Buck, well done! 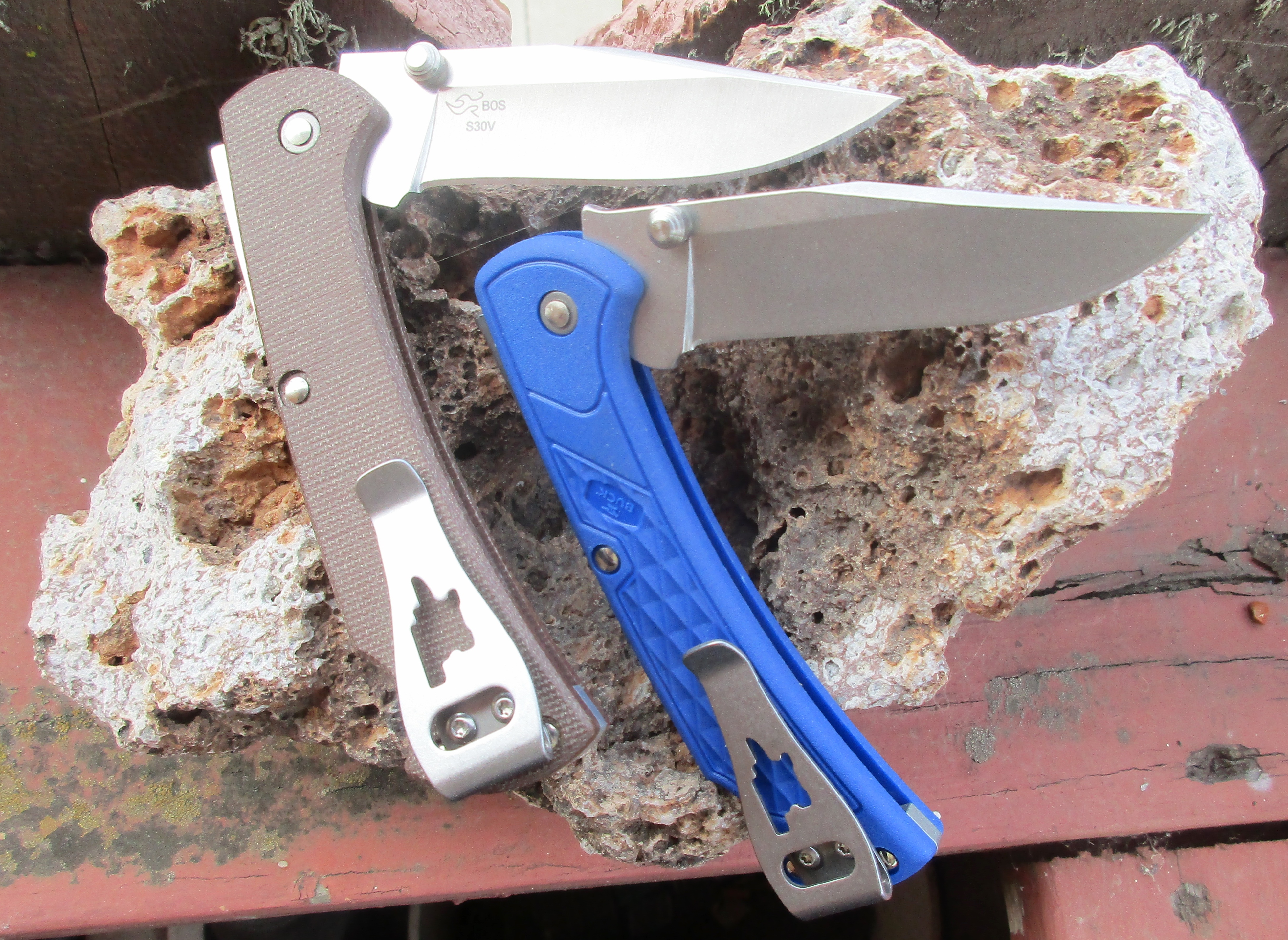 Cool, thanks D ale, I have quite a few, I'll add this to them. I have Hammer Brand, New York Knife Co, & others, I just love the historical aspects of pocket knives. 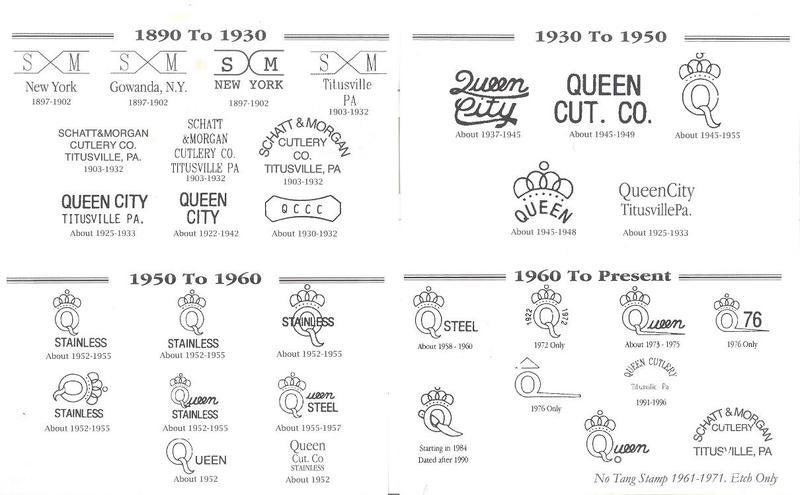 I've other brand's stamping tables if you need them too, Syd.
Enjoy,

Nope D ale, I already told my 4 yr old grandson that it will be his one day so it is most definitely NFS!! My daughter also had a glint in her eye when she saw it and I hid it quickly lest she make off with it, (something she's done in the past, haven't seen my genuine Himalayan Imports Kukri's in years since she took a shine to them). Thank you again for the dating info, where did that chart come from anyway? It would be nice to have that chart available for future reference. And yes, 440C is more "stain resistant" than stainless, it does have a spot or two of corrosion but considering it is nearly as old as I am it's doing pretty well, (I've got a spot or three of corrosion myself, lol). I'm thrilled though that it is of 440C, nowadays you don't see that as much as in the past.

Wow, thank you D ale for the dating info and confirming it to be SS. I just found a sheath for that knife and will be adding it to my EDC rotation today. It sharpened up very nicely, and was the first buy of an ongoing splurge. Since I first posted this thread I have obtained, (or am obtaining), seven different pocket knives after abstaining for several months. That's a little much even for an addict like me, but a splurge is a splurge, no reason to stop now. At least I know I'm getting at least one Christmas present that I like. Note: Stainless Steel is a misnomer. It's merely stain resistant. After about 60 years .. you might see a stain or light pitting.

Now I know I'm back! Did another thrift store crawl today, got a dandy sport coat with suede shoulders & elbows that fit perfectly, and hiding in a showcase I found a Kershaw Select Fire 1920 knife/screwdriver for $5, (at a different thrift store this time). An import for sure, but a well built and solid tool nonetheless. I found numerous listings for them on ebay, mostly in the $20-$30 range, so snagging this one for a nickel was a decent find. To top it all off I caved last night and bought myself an early Christmas present, I ordered two variations of the #112 Ranger directly from Buck using my "Pro" account discount, (#112 Slim Pro in tan Micarta & #112 Slim Select in blue nylon, both with deep carry belt clip), so it seems my addiction is firmly in place. When I get those I'll post them in the appropriate forum, for now here is that nifty Kershaw. 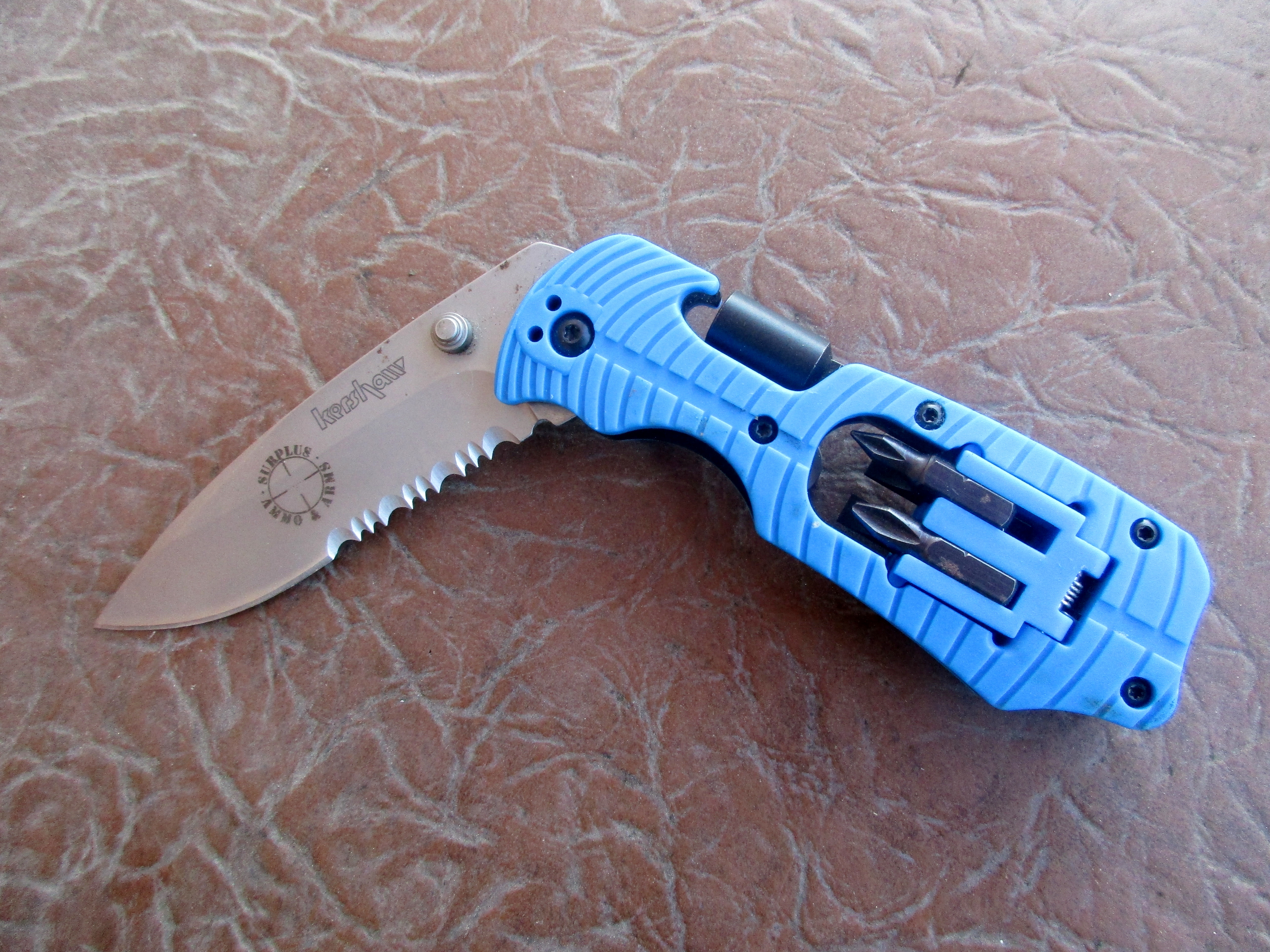 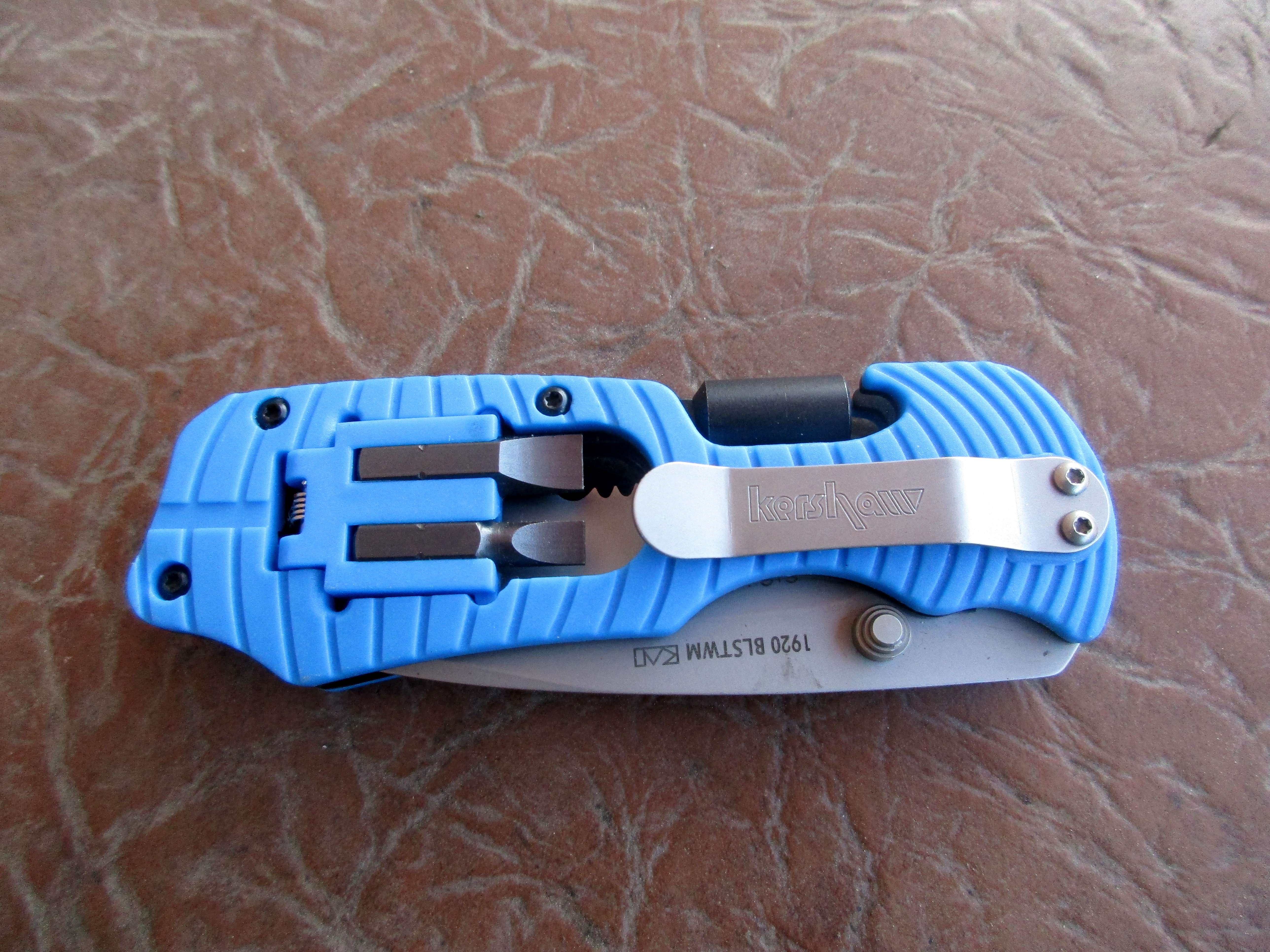 That was a great deal for the Queen, and can't go wrong for the prices of the Colonials imo. Get well and get back to the collecting you obviously enjoy. Just take it easy.

Kevin replied to Emory Alexander's discussion Do you EDC more than you can carry in you pocket? in the group EDC Club
10 hours ago

ricki scales is now a member of iKnife Collector
yesterday
Welcome Them!

Rick Lent is now a member of iKnife Collector
Sunday
Welcome Them!