First of all, let me start by saying this is a work in progress. We know how difficult it is to determine the age of a Boker knife. Tang stamps, steel, bolster and liner materials, blade etches, and scale materials all tell a part of the story. Another method is by looking at the shields. It is tricky, because one needs to be certain that the shield is original to the knife. For the sake of argument, let's say that you can be sure ...

Here is a collection of shields, and my attempt to put a date of use with them. Most of these are educated guesses, based on other factors. With that said:

GENERALLY speaking, a plain shield with no company logo or name is pre 1960. Originally, shields on knife handles were mostly for decoration. They also made a convenient location for engraving your initials. In the 1950s and 1960s this changed. Having said that, let me immediately backpedal because Solingen made Bokers have used the tree shield with SOLINGEN underneath for quite a long time.

I've attempted to place a date with the following photos. Please let me know if you have additional photos to add, or correct me if you see glaring errors. I am certain there will be several!

First is the tried and true bar shield. This one is on a knife made in 1937, but the bar shield was in use long before that. One of the earliest catalogs I have is a 1914 reprint and several bar shields are included.

Next is another old standard. The federal shield. There are a few variations on this theme, dating up through the 1950s on US made Bokers. Many variations of these were used in the early 1900s also. 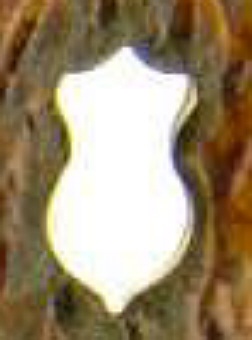 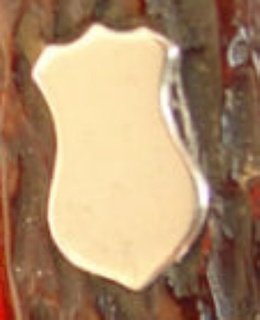 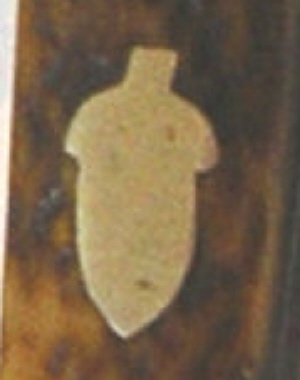 This shield is circa 1940s-1950s. Together with a BOKER/USA tang stamp. This is my favorite EDC knife - an 8588 stockman pattern with a broken main blade. It was purchased at an online auction. The main blade is about 3/8" too short, and has been reprofiled. 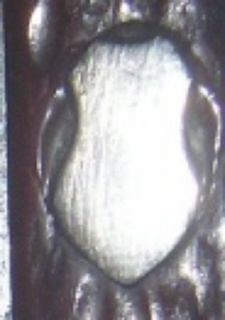 If coupled with a BOKER/USA tang stamp, the shield below indicates a US Boker manufactured before 1975. Careful though - many old Solingen made knives also have this shield! Note the lack of a trademark registered symbol. The shield pictured is from a NEW BRITAIN blade etched US Boker circa 1968-1970. 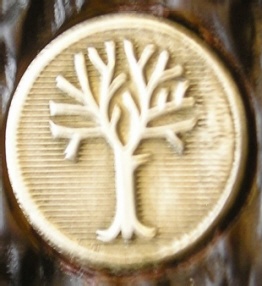 A shield with a trademark registered symbol indicates a knife manufactured after 1975. 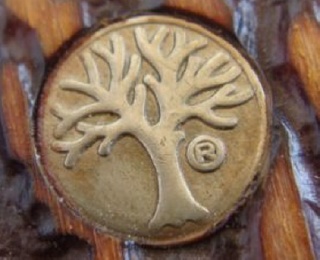 When the COOPER group owned Boker in its final years of US knife production, this shield was used. Circa 1982. Even though UNITED BOKER was its own separate company, I've included this shield because there are so many out there. Circa 1984-1994. Below is the standard SOLINGEN shield. This one is still in use today. I have no idea how long this shield has been in use. Made in Germany. 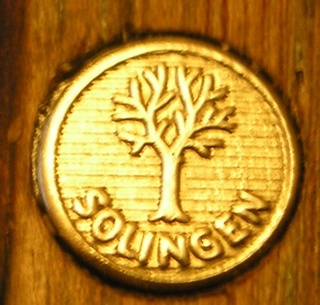 Compare the shield above to this Solingen shield from the early 1960s. Made in Germany. 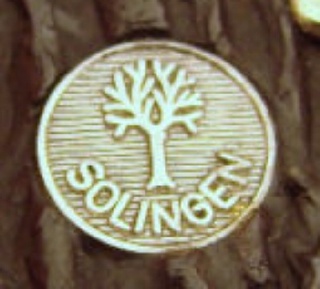 It is my understanding that the Henry Boker shield below is from the 1980s, and was a special factory order for a large US knife distributor. Made in Germany. 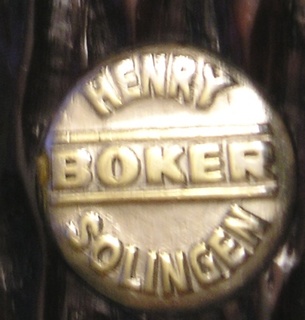 This shield was used in 1994. That was the 125th anniversary of the Solingen manufacturing facility. 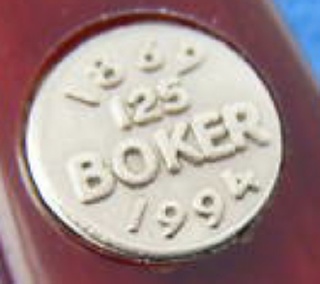 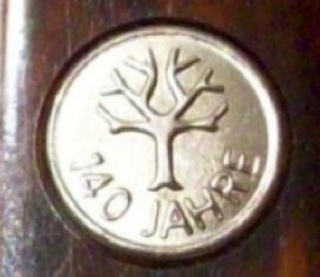 This shield is relatively new (circa 2008). It is found on knives with appaloosa bone handles. 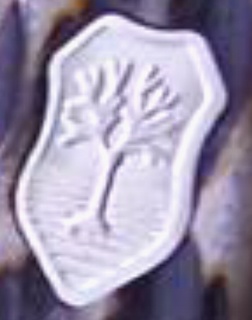 Below are two shields that I can not identify. Do you know the age? 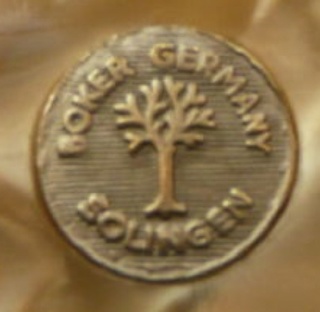 I am certain that there are other collectors who can add to this list! Reply, and show your shields. My focus is on Boker knives manufactured after WW2, so I know there are several shields from the early 1900s that aren't shown. Got any pics to add?

Comment by Thomas Osborne on October 9, 2022 at 13:31
I have a old boker 3 blade the shield has the tree and there is a 19 on the left side of tree and 00 other right side of tree at the base of the tree, does anyone have a clue as to how old my boker may be the tang is stamped Boker Solingen Germany. If any one may know an estimate of how old my knife is please leave a comment, thank you

A corkscrew collector bought one like that online and did a little writeup on it.

There must be something in the air. I finally remembered where I saw the bottom, left shield at. It was on this knife, Wyeth's Warranted Cutlery, (made by Boker from 1860 to present according to Goins" 4th edition). Not my knife, just borrowed the pictures. I have seen the same, exact shield & knife stamped H. Boker & Co.'s Improved Cutlery as well. 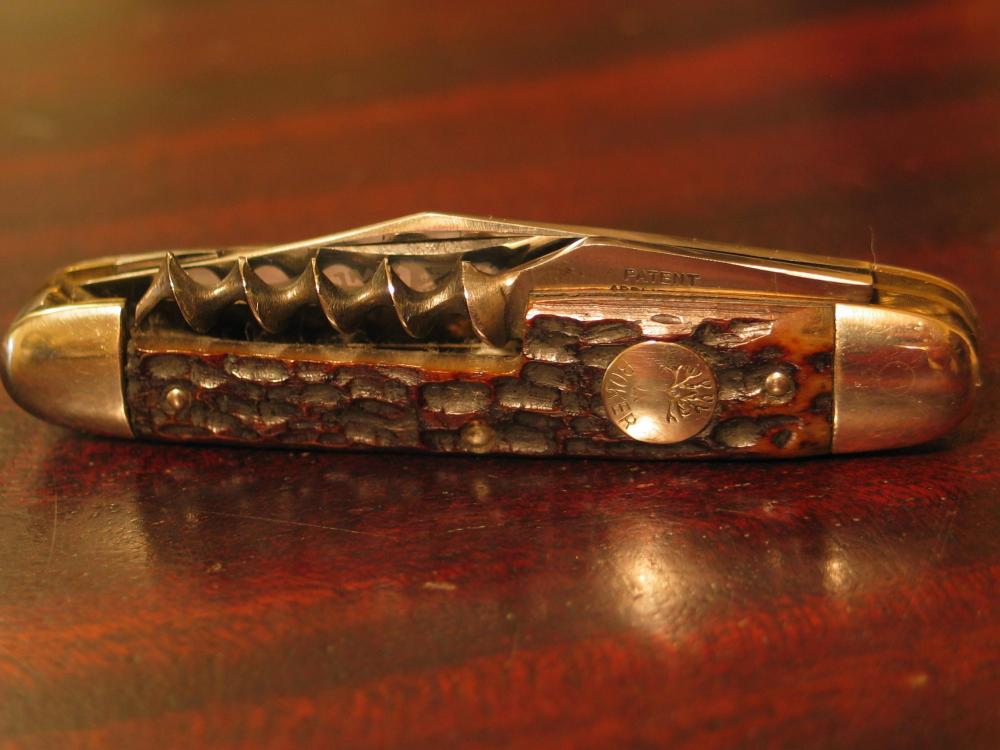 Ha! Five years later, I finally remember where I've seen the final shield in this post. 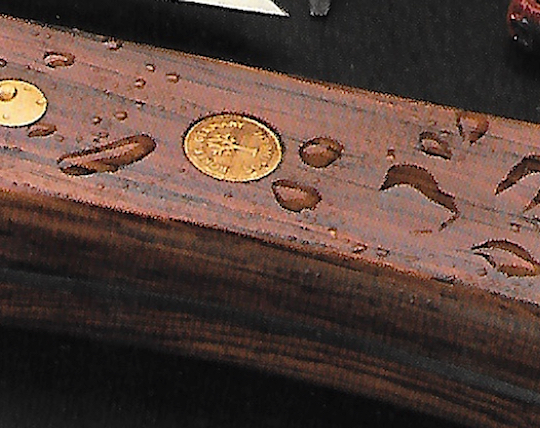 I did Steve, I now know where it's at. I have another Boker coming in and will surely have at least one question - new to Boker collecting. Thanks.

Boker-You are correct-- the lack of an umlat above the O dates it to the 60's-- As seen here-- Look for the pic that says INOX underneath- means stainless-http://iknifecollector.com/group/bokerfans/forum/topics/boker-dating- Your shield was used into the 70's and some sources say the 80's on the Boker imports-- However, I found a PDF from the early 70's showing the Boker catalogue--- Although, some of the German imports were still shown with a shield like yours, your 5452 model was shown with the newer circle shield- All of this tells me your small congress is circa 1960's- Ricky may have other ideas, but I would date it to the 60's.

John, Ricky, Jan - thanks for helping. Here is a pic of the tang stamp. Notice there are no dots above the O. I read somewhere this might help determine the age....not sure though. 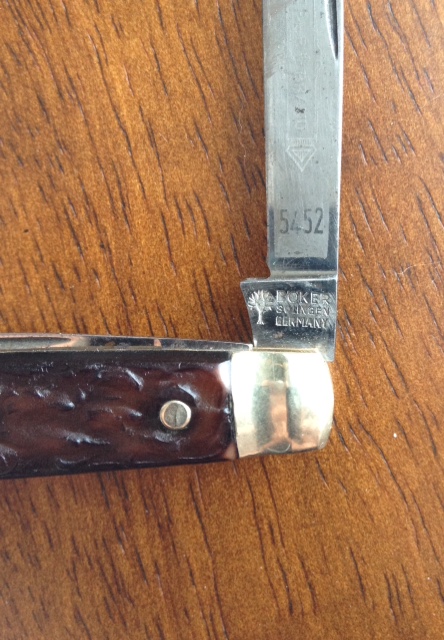