These are some pics of a 2 ton granite ball that rotates on top of it's base for some unknown reason in a cemetary in Sullivan, IL. It broke free from it's base a couple of years after it was erected, and very slowly revolves- The name Johnson was originally straight across the ball- In the 1940's they used a crane and recemented it in its original position. After about 2 years. it broke free again and started rotating again- If you notice the chip in one of the photos. that it where it broke free the 2nd time- The 1st pic I took in 1977 the rest in 2004- It seems to follow the same general path, but I have observed the name Johnson completely under the ball, etc. Makes you wonder ?? 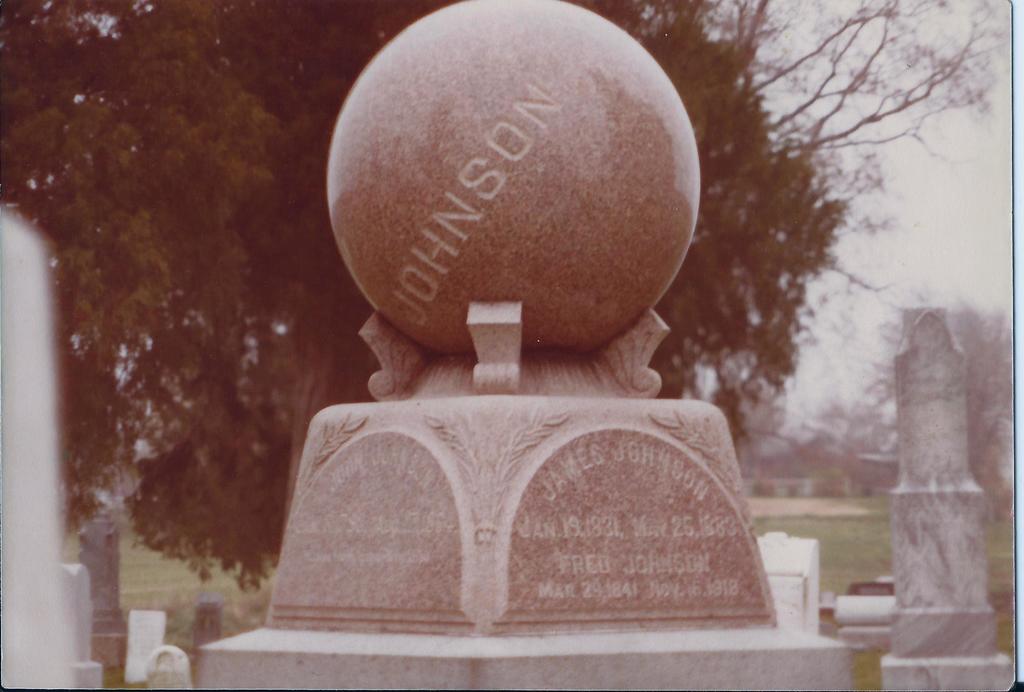 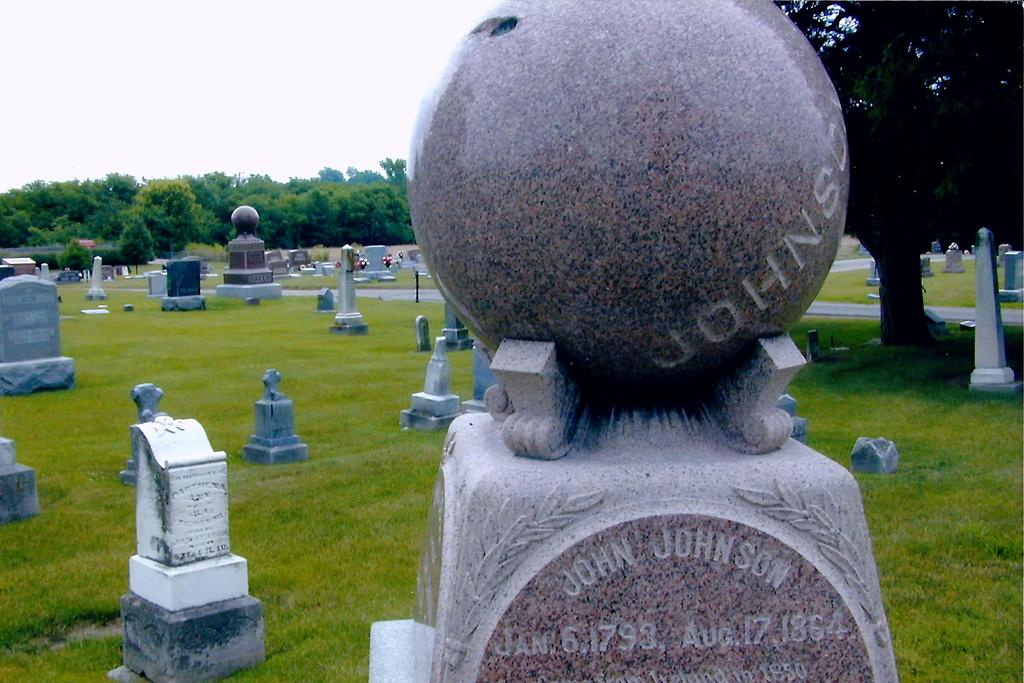 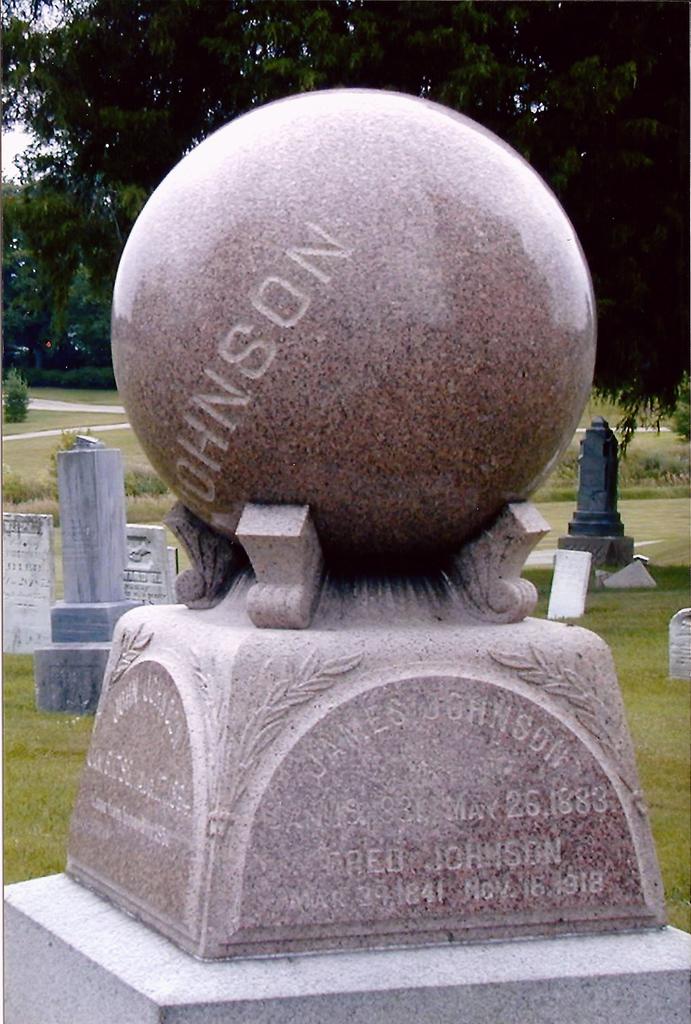 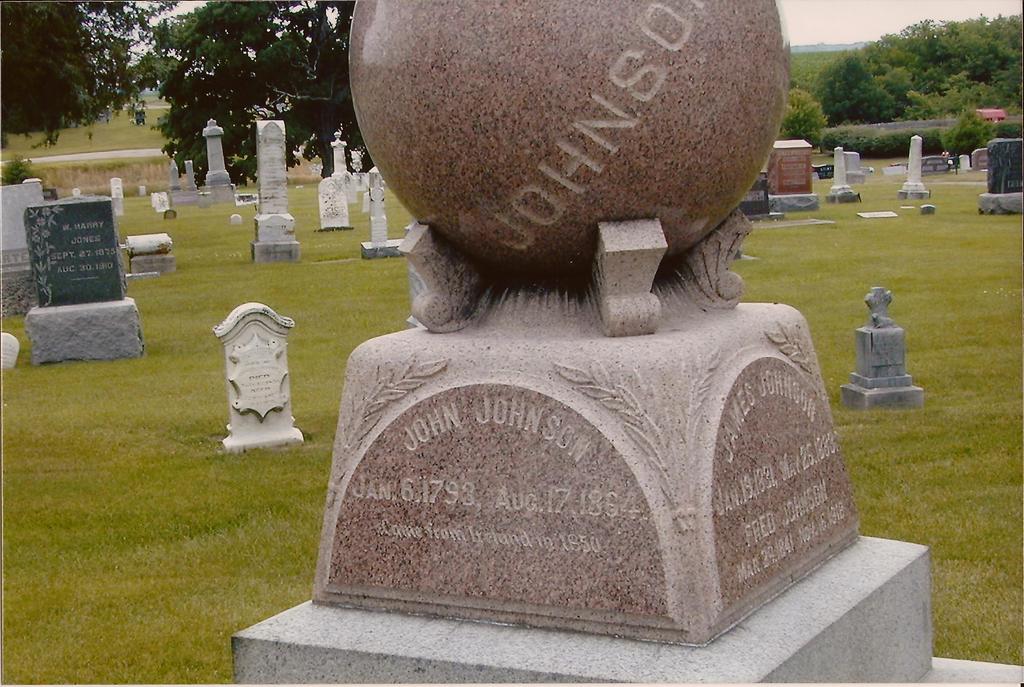 BTW, it is still doing the same thing !!

John, it might be more accurate to say non uniform expansion and contraction.

John, the only other natural explanation that I can think of off the top of my head would be unequal expansion and contraction.

Charles & DLKG-Thanx for the comments-- I realize that I ain't the sharpest knife in the drawer, but maybe you can explain why the darn ball keeps steadily rotating ??-- If off balance or even a magnetic pull, I would think that once it reached the base (lowest point) it would stop. Similarly, continual seismic activity for  over a hundred years?? I have personally seen the name completely under the ball, at the top, and every where in between over the years. Not pooh poohing your theories, just trying to comprehend why the rotation continues on.

DLKG, as an engineer, I would say that your idea is a very definite possibility, especially if the mass of the ball is not evenly distributed.  It would be interesting to see what would happen if the ball was placed on a flat level hard surface.  If it rolls to an equilibrium point that would most likely be the answer to the mystery.

My guess is that it's caused by seismic activity.  Small earthquakes could go unnoticed by people, but the rigid materials of the ball & its supports would amplify the tremors, & along with the smooth surfaces minimizing friction, the ball turns, possibly even influenced by even the slightest uneven distributions of weight.

But my guess isn't nearly as fun as the ones about aliens, witches, or even mysterious magnetic forces...

I realise this is an old topic- But the weirdness factor just reoccurred- I just came into contact with the great-great grandaughter of the Johnsons' buried there--WOW !! This is an article published verbatim from a circa 1940's 50's article from the Sullivan IL paper- After that some recollections via my 91 year old mother. BTW, if you were to Google "rotating tombstone" you will find there is a famous one in Marion, Ohio- Sadly, it doesn't have the cool factor this one does-But it was listed in Ripley's Believe It Or Not---

I
forget when this article was first printed, but as best as I recall,
from the 40's or 50's. This is from the Moultrie County News, the
Sullivan newspaper-

Sullivan- A granite ball that slowly rotates atop a tombstone in
Greenhill cemetery here, has come to be known as the "mystery globe".
Although cemented fast to the pedestal on which it is mounted, the
huge ball slowly,but surely rotates as the seasons pass.
In the grave overshadowed by the tombstone, are buried six members
of the Johnson family.

Family Was Irish
_______________
Back in 1850 John Johnson came over from Ireland and settled in
Sullivan.Here he was buried in 1864 at the age of 71 in the Greenhill
cemetery. His wife, Anna Bell, died the year before. Together they
shared the grave. It is thought that the other four in the plot are
the children. James was buried there in '83; Christina in 1901;
Margaret in 1912; and Fred in 1918.
About 1900 a massive pedestal was constructed. On this was set a
large brown granite ball, more than two feet in diameter with the name
Johnson carved horizontally on side facing west.

Ball Begins  to Turn
________________
A year or so later the ball began to revolve. It moved two inches
the first year. The name "Johnson" was tilted at a decided angle.
Reading from the "J' it ran uphill, and the Sullivan children began to
whisper. They called it the spook ball and the ghost globe. No
explanation was given as to the cause of the phenomenon.
Twenty-three years went by and the name traveled to the top and
towards the north. Then a Sullivan mason was called in to set it
right. Once more the name was made to face the west and the sphere was
cemented down.

Rotates Again
_____________
A year passed and again rotation started. A new generation of
children originated new legends. Did witches and goblins play ball at
night with the massive globe?  No one knows. One queer fact is that
the sphere, in following this second  rotation,  is moving in the same
path it moved the first time.
Few scientific explanations have been offered. Perhaps the sun
expanding only one side at a time could move it. Of the four stone
supports, only two are in the sun at one time. Could the expansion of
these be enough to move such a weight?  Maybe the cold of the winter
has something to do with it or the rotation of the earth as  it
follows the cycles of the seasons. No one is certain.


A few personal facts as related by my mom as best as I can remember--
These days she doesn't recall much. It was ruled out that vandals or
kids were responsible. The ball alone weighs somewhere between one and
two tons and there are no trees close enough to support a block and
tackle. When the mason reset the ball, it required a large crane to do
so. The most prevalent theory of the day was that something within the
granite ball was causing a strong magnetic pull from the earth,
causing it to move. It would have to be a massive force, to move a two
ton ball and rip it from a cemented  concrete foundation. The pictures
I have taken, although years apart, show the name Johnson in roughly
the same angle. However, I have seen it with the name completely
underneath the ball, at the top, etc. In addition, the chip missing
from the ball, as seen in some of my pics, is supposedly from when the
ball ripped free from it's base the second time.

Thanks John for sharing that , really really strange!

Wonder if Mr Johnson is telling us something?

LOL, maybe they are arguing in there, I notice John and Fred are both there