Knife Day is the day to appreciate the knives that folk use on a daily basis. This day is a celebration of this marvelous tool that has been with humans since the dawn of time.

I am not sure that most folks know about today...but we sure do.  So…

This is a Tanto that was given to me by the widow of my best friend that died a few years ago.  He loved the Japanese swords, and unfortunately I know little of its history.  I did have an expert look at it, who determined it was made from a cut down (or broken) WWII Japanese sword.  The polishing is not correct, the shape of the blade tip is a bit off, but the parts are all authentic and someone put a lot of time into this piece.  The collar was noted as being very…

I am a brat!  I was raised being moved from country to country, state to state and base to base.  It was honestly a privilege.  I learned that no matter where you are in the world at 4PM every day, you stopped, placed your hand over your heart, listened to the National Anthem followed by Taps.  You learned early that God and Country were to be respected and those lost remembered. 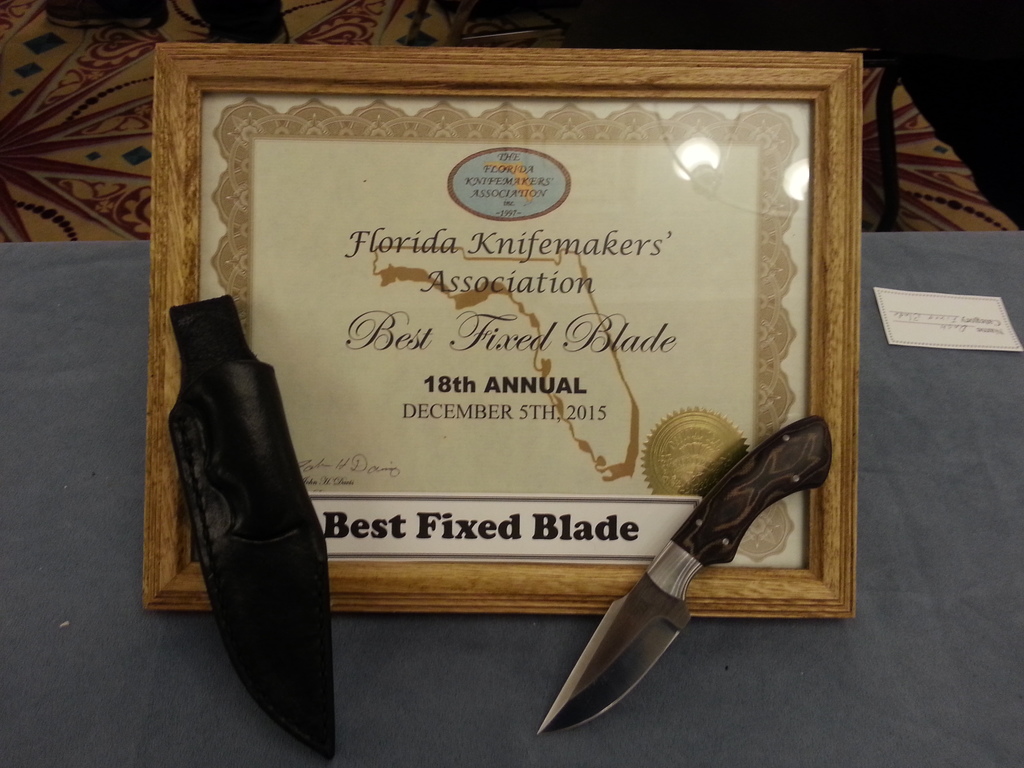 How and where do you take a stand?

Some states say they have the right to dictate what you can carry and why, simply because you have chosen to live there.  Now there seems to be a heated discussion about what your allowed to see.  Thats right, pictures of "weapons" such as a SAK knife are no longer your choice to see LOL

Google Adwords has long taken the stand that folks that sell guns cannot advertise with them.  Then it was companies that incorporated the word KNIFE in their business name.  Yes even a site where we…

Donnie & Jan will not be going to Ohio

As much as I hate this, we will not be going on to Ohio from here.  Something has come up at home and we need to be in Tampa on Wed.  With my health a trip back to Tampa and then up to Ohio is just not going to be possible.

If the trip home were not absolutely necessary, I would cancel it but alas it is not something I can pass on.  I apologize to all that are going, there are so many I wanted to meet.  There is another one in April and I have every intention of making it there if I…

A Pakistan suppliers point of view...didn't see that coming did you?

I was recently contacted by a supplier of Pakistan knives and steel.  Now, Now...give this discussion a chance.

This supplier has been on iKC for a number of years.  When he first contacted me it was with the hope that I would listen and have an open minded discussion with him.  Because he is a member and has been very respectful not to overstep here at iKC with selling openly.  I chose to listen.  This was how the discussion started

The issue is that I want to…

Create the time to visit PA Aug 7-9 , YOU WILL NOT REGRET IT!

What if you could spend a weekend in a town known for knife making, tour two US Knife factories and celebrate the likes of French Kate, Ben Hogan and the US oil Boom?  All the while spending the night in a caboose?

It brings back memories for me.  This is the first year in some time that we will not be there.  I encourage anyone close enough to make this trip...Do IT!

Titusville is a beautiful town, right down the road from Tidioute.  This year the one weekend can be action…

SOME GROUPS WILL BE DEACTIVATED

Some of the groups we have been hosting will be deactivated, beginning this week.  We will not lose any information, I will transfer it to another appropriate group.  This is a time consuming project but necessary for a number of reasons.

These groups are not growing and activity is what drives our numbers in the search engines and with new members.  Comments breed comments.

Our hosting provider NING is transitioning us to a new platform next year, dates unknown…

A great letter to send to your Governors

There is nothing good to say about New Jersey's pending Ivory Ban, S.2012/A.3128. It starts by citing every exaggeration and…

We will still be honoring all Blind Horse Knives Lifetime Warranties. Contact either shop for information.

That announcement is not quite what you wanted to see when you went to the Blind Horse site.  A team of great Knifemakers, producing quality and hand built knives.  The gentleman have…

WHAT WOULD YOU WANT TO SEE IF IKC HELD A KNIFE EVENT??????

Sometimes you go to a knife show, 70 tables of knives to look at people to meet...Great folks to talk knives with

Sometimes you go to knife event, a knife show with things like the cutting challenges and a bit of forging.

If we had the opportunity to plan a knife event what would it be like?  No answer is too small or too large, help me brain storm this out!

If you were going to plan a knife event....what would be the plan, what would you include?

Todays stop was the FL. Knifemakers show , some nice knives!!

As usual a show involving the Gators Cutlery Club was a hit.  The Knifemakers show brings in some real talent and some of the nicest folks you would ever hope to meet.

One of the things I like about this show is that it has something for everyone.  There are the customs, the high dollar customs, the manufactured and even some english beauties.

A knife maker that always make me smile when I see him at a show?  Mr. Russell McNabb.  A man whose knives are created…

Setting up a Blade Show 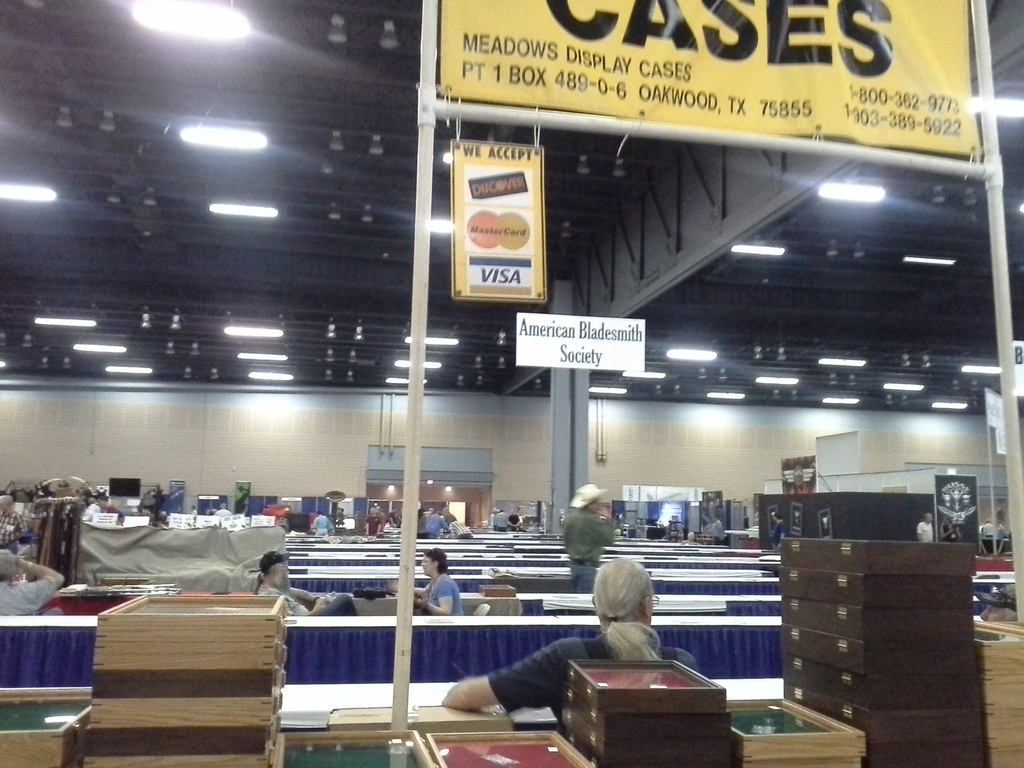 Then you tell everyone to decorate theirs as they see fit 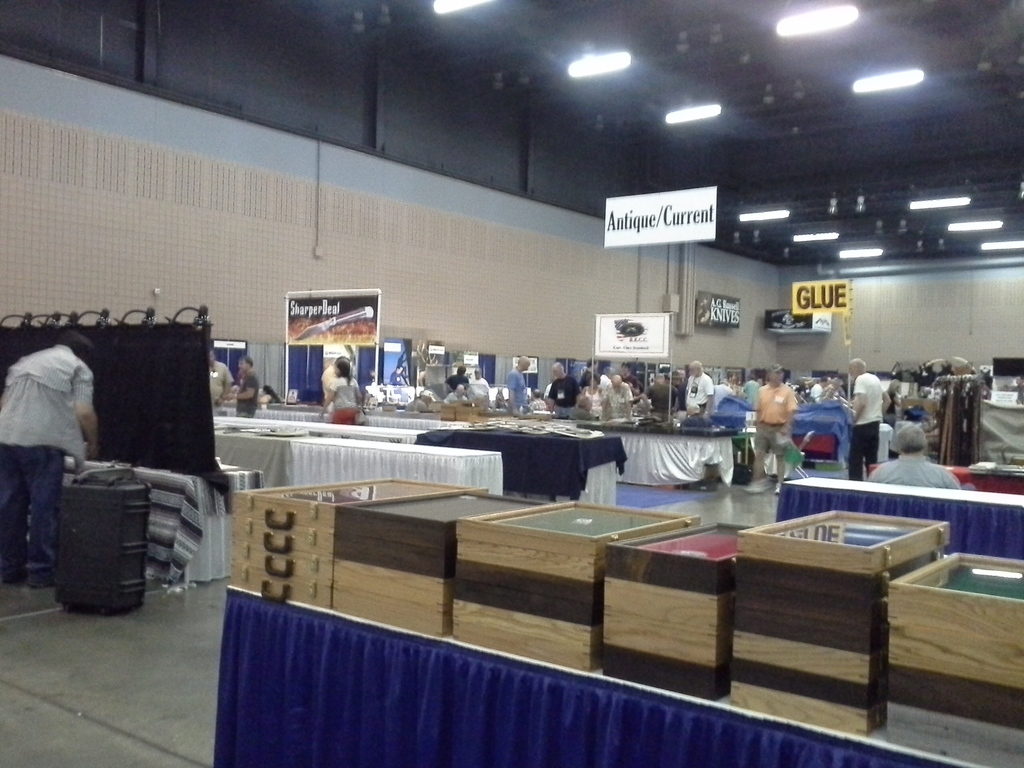 I will get a shot of some of the more elaborate ones tomorrow.  Can not…

Supporting the National Knife Museum...worth it!