BUY/INVEST IN SILVER INSTEAD OF BUYING THAT NEXT KNIFE...

So Silver at $18.35 is very lucrative and supposedly will double in the next year. In 1900 there was 12 billion oz. above ground. Today there's less…

I did a bladesmithing demo for a highschool class yesterday. I had the boys try and bend a piece of anealed 1/4 steel then heated the same steel and quenched it in water and asked the girls to bend it. You should have seen the look on thier faces when it broke in 1/2.

ar·bi·trary: a : based on or determined by individual preference or convenience rather than by necessity or the intrinsic nature of something.

b : existing or coming about seemingly at random or by chance or as a capricious and unreasonable act of will.

Hey Guys...It's been a while since I wrote a Blog but,…

In Memoriam A G Russell called and our 2010 Sunfish Club Knife is in!!

I'm excited to report our first-ever iKC club knife is in. A. G. called me today as they finished their inspection of each knife in our order.
I'll be emailing all you members who have reserved one so far. I want to get them in and double check the shipping amount and then will let you know.
A. G. said the exotic Monkey Thorn scales (handles) look fabulous. I asked him to snap me a pic so I could show you the actual knife and black belt holster…
Continue

$100.00 gift certificate and a Protoype....Help a GREAT cause and bid soon

The bidding on the Prototype #48 Dogleg and $100 Gift Certificate is up to $200 as of this weekend. That's a great start and we've got just under 2 weeks left before the auction ends on 6/22. I'm going to keep reminding you that even if you're not interested in bidding, pass the word along to your friends and fellow collectors. Not only is this an opportunity to grab onto a genuine Great Eastern Cutlery Prototype, it's your chance to make a contribution to help out our wounded Vets coming back… Continue

"The nine most terrifying words in the English Language are...... I'm From The Government, And I'm Here To Help." - Ronald Reagan

I made the new issue of Blade Mag. in the Knife I Carry section. I had just got home from work when the picture was taken. I was sure surprised when I seen that I was in this issue. Thorvan Patten JR.

This is for the FYI file. 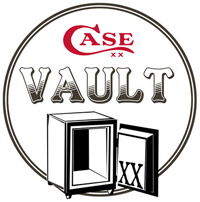 Four popular patterns and all related tool works were locked away inside the “Case XX Vault” for a period of at least three years before being reintroduced to the public.

The reasons to institute this program are…