WHAT IS A FAVORITE HANDLE MATERIAL FOR YOU.....

FOR ME I KNOW WHAT I WANT IN A HANDLE MATERIAL SOMETHING WITH A GOOD GRIP.  SO I GUESS FOR ME A FAVORITE WOULD BE G-10 HANDLES, SO THERE IS NO SLIP OR VERY LITTLE SLIP WHEN I AM CHOPPING WOOD OR WHEN I'M CAMPING AND HUNTING.

BUT ON THE OTHER HAND I LOVE THE LOOK OF BEAUTIFUL WOODS. SO I GUESS YOU WOULD HAVE TO HAVE TWO FAVORITE'S ONE FOR THE USER KNIFE AND ONE FOR THE COLLECTOR KNIFE.

WHAT DO YOU GUY'S THINK? IS THERE A  FAVORITE HANDLE FOR YOU? OR DO MOST OF YOU THINK THE WAY…

I am wanting to reshape a sheepsfoot  blade on an existing knife, unfortunately I will loose my nail nick if I do that, Has anyone ever tried to put a different nail nick in any existing knife blade?  I am thinking about using a cut off blade in a dremel tool.  Any suggestions?

Last saturday was the annual DKE in Tiel the Netherlands. This was my fourth time going to it and I always really enjoy it. This year was a little different though because of two reasons:

1) The show was a lot bigger with close to a 100 standholders.

2) It was my first time being there as a standholder.

I had been preparing for this show thouroughly for the past few months and had a (very) full table to show.

(This is me at my table right before the doors…

Well I was blessed when we went to the Indian Casino (Thunder Valley) to celebrate my birthday.  Birthday was April 12th, the big big sixty, and the celebbration was April 15th.

Played the slots which usually I don't do much.  I am more of a poker tournament guy, but the slots were kind to me.

Sunday I am going to the Indian Casino and celerate my birthday some more.  They are gonna open their teepees and share the wealth with this Apache brother.  Then we are all gonna meet up at the steakhouse and have dinner.  All ya'll in California come toThunder Valley Casino and have one on me!!!

It's a great day today and a very Happy Birthday to iKC ! Yes, just 3 years ago, iKnife Collector became a reality. From our earnest start it was destined to become a quality, friendly knife collecting community with the idea all members are bound together through their passion for knives.

Our founder was none other than, writer and publisher of the Cutlery Journal Scott King, who worked tirelessly in the early day to launch iKnife Collector. This was his vision, that all knife…

It’s been a busy year at iKC. 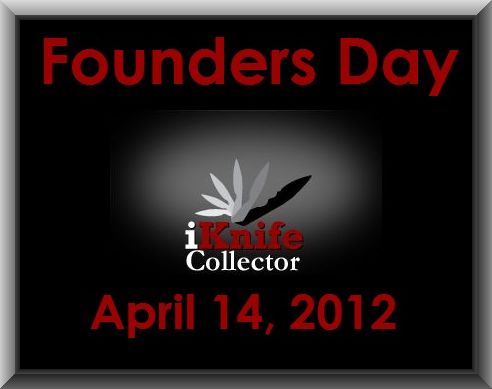 We once again gather to thank Scott King for having the vision and  forethought  to create iKC.

So please...all my friends in the middle (heart) of the country.....be careful on Saturday!

Case has come out with their tactical folder which is made in China.  They have 28 models but when you discount serrated blades, black and silver blades and medium and small you have 9 basic folding knives.  To check out these knives go to www.tecx.com to look over all of the models.  They are priced from $15.99 to $59.99 USD.  Here are some pictures including the Case single bladed, liner lock, thumb stud trapper with a pocket clip.  This Case trapper…

Does anyone live here?

Well with a prior post I learned that our  iKnife Community Founder, Scott King, makes his home in Gadsden Alabama which is also the home of the Friday Night Cruise-In.

Does anyone make their home in Crossville, Tennessee the home of the I-40 Dragway and the Bounty Race???

The April Bounty Race will be the biggest index race in history at the 1/8th Mile. …

eBay, eBayers and My Knife Auctions

This week just no one is bidding on any of my knives.

Why can't those peeps bid on the knives I am selling instead of the knife I am trying to buy?

Everyone who uses knives, sells knives, buys knives, collects knives, or makes knives should be anAKTI member. It will take all of us to Keep Knives in American Lives.

AKTI Annual Dues are based on your membership category commitment level. Your support is needed to make AKTI’s efforts successful for us all. You decide which…

Anyone in Gadsden Alabama??

I have a friend who wrote a book about Sleeper Cars, in fact if you build or try to masquerade your fast street car and make it look like a common everyday car----chances are  you read his book.

For the rest of us knife collectors, usually we also like guns, motorcycles and cars.  OK, well whiskey...and chicks too!!

They just all go together.

A Shout Out to iKnife Collector From Famous Custom Motorcycle Builder

Dude builds some of the sickest bikes ever!!!

Anyway I tweeted about iKnife Collector, just telling people it's a great place to meet other knife collectors.

So I bought some new Barlow's to celebrate April Fool's Dasy!!

I'll describe the picsd for you.

The first is all 3 knives displayed with blades open.

Pic 2:  The bolster of the Russell Barlow

RUSSELL in a half-circle over

Pic 4:  the exciting pic, is the Russell again.  Etched on the large blade is the…

All Most Made It

I was waiting on UPS to deliver my order from SMKW and they were late. My kids beat them home and the four Marbles I had ordered is now just two. So much for being a Dad with two collector offspring. Hope they like them as much as I do. Got to place another order. Bring on tomorrow! I cant wait. Happy Easter everyone! I wonder what my kids are getting for easter? Bet it will be sharp looking.

Just bought my first knife off of eBay,a giraffe bone hunting knife from England. I'll let you know how this works out.  I'm a little afraid, never bought any out of the states before. Might be a live and learn lesson.

Has anyone gotten in on this fantastic idea yet?

Gilbert, AZ --(Ammoland.com)- Knife Rights is excited to announce the launch of its2012 Ultimate Steel Knives, Guns & More Spectacular – a unique fundraiser offering you the chance to win incredible prizes including one-of-a-kind knives, firearms, gear, and more – all for a donation as small as $20.

This is our biggest and best fundraiser ever! We have…