Burke, Idaho: A Modern Ghost Town and a Lesson in Economics, Pt. 4

First, let me apologize for taking so long to get this out. Between work and being sick, I just haven't been able to move on to the next chapter of our little story. Onward!

In the previous posting, we left off at the end of what remains of Burke's Commercial District. Thus far, nearly all of the photos that I've shown have been of homes, buildings, vacant lots and hillsides located on the left side of street that runs right through the middle of the town. Are you curious to…

If 2 more people answered this Contest we would see that 3 is really iii.

Knife shows are a lot of fun.

They are best,however, when visitors follow a few basic rules of courtesy.

Do not handle knives without permission.

displayed as a collector's item.

Do not wipe off the blade of a knife. Let the exhibitor do it.

Do not open more than one blade of a folding knife at a time.

Do not block a sale table if…

As I explained in the post about this contest (#4), the winner gets to make his/her choice between three knives.

Well the last contest seemed to zip by with Peter's nice win.  I had expected a more difficult time and a little longer contest.  I even had at least one Tip to give you guys.

You're just too knife knowledgeable.  There is always someone at iKC who can deduce the answer....which is good.  But it always seems more fun when they go for at least 3-44 days.  You guys get me laughing I'll tell ya.

So, we will move forward with Contest #4.

I think it will take a little longer,…

Hi Guys, I have a knife that I purchased a few years ago that is hand scribed on the blade," Handcrafted by H A Beauchamp". I found a G Beauchamp custom maker. Is this the same maker or possibly a coincidence? I can post pics as this knife is very similar to the G Beauchamp with a nice scrimshaw Eagle and mirror polished blade.

Thanks for any input.  Mike

CONTEST to WIN a FREE Knife!

Dang, even a blind dog could win this contest!

I could flip a coin and have a one in sumpthin chance of winning, and I have flipping challenges.

I love Hot Rods maybe as much as I love knives.  And guns.  And motorcycles.....

There are a lot of Hot Rod Reunions, last year i went to the one down in Long Beach California.

I would love to go to this one, some nice cars for sure.  And since I could not go, then Byrd's photographsare…

So I did nove the Barlows into a new case and I will post those soon..  And I added a few G.D. (no I am not cussing) Barlows as well.

That gave me an empty case to fill up.  So the pics below are a mixture of things.

The first photo is an entire row of…

Named at this past weekend's 2012 BLADE Show (www.bladeshow.com) at the Cobb Galleria Centre in Atlanta, Georgia, the Blade Magazine 2012 Knife-Of-The-Year® Awards went to the finest production knives the world has to offer.

KAI USA and its knife divisions of Kershaw, Zero Tolerance and Shun dominated the awards, taking home four of the honors: Overall, Best Buy, Knife Collaboration and Kitchen Knife. DPx Gear was a…

You can see one is a foldingg knife and the other is a very large Bowie or hunting knife (?)  I'm not sure.  I bought these from a guy on All About Pocket Knives (AAPK).  I have bought a few knives from him over the last two years and I always print out info when I buy them but I can't find it today.  And he always sends printed info when he ships a knife, but not this time.

And what do you know....the Bowie or…

Paracord - for a versatile sheath. 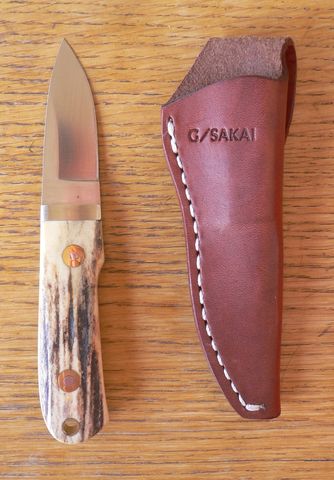 I love this "City Hunter" by G. Sakai (Seki, Japan) that I recently purchased from SunBladesKnives – another gorgeous Japanese knife indeed. But I really do not like the sheath; the quality of construction and design is especially disappointing. In particular, I found that the curve of the loop lacked harmony.

So I did not have qualms about cutting 35 inches of Paracord to introduce some modifications, in order to make the sheath more versatile, too, because I like…

Well Steve it was a screwy auction, so many knives, and so much going on at one time, One of the presenters was doing a fine job, and the other was kinda hiding the stag and better knives, that is untill my large brother steppped in and called them out about it. But most of the damage was done before my brother got T'd off.…

Just got home an hour ago from the Goodyear, AZ gun show and couldn't wait to share my new find of a 2nd Generation John EK Commando Knife. ( I carried a first gen. when I served actively in Germany in the late 70's).

This one is unique as it has Copper rivets instead of the lead or brass rivets. (It is my belief that only about 50 of these were made, but I'll find out more when I call EK tomorrow.) The knife is an M3 with Wallnut sacales, High carbon steel, 1 1/2 edged blade, full…

Burke, Idaho, a Modern Ghost Town and a Lesson in Economics Part 3

In "Burke, Idaho, a Modern Ghost Town and a Lesson in Economics Part 2", we left off at the point where some inhabited homes transitioned into totally abandoned buildings. As you can see from the closing photo in the previous blog posting, the left side of the street was largely "residential".

One of the physical challenges that the surrounding landscape posed for Burke's residents was that the floor of the canyon is only 300 feet across. Once that "flat" floor space was used…

A Day at the Blade

Had a wonderful time, put up some pics last night.  We had a few folks come by to talk with us yesterday but not too many.  It was a nice time, met some great folks.  I will write more today, have a laundry list of people to see and knives to open and close.

So far I have handed out over 150 business cards with iKC's web address.  Having a great time spreading the word  Wish you were all here with us!!

I want to meet every iKC member that goes to the Blade show and I want you all to meet each other.  Always nice to put a person in place of the typing!  So here is the deal.

where: Next to Great Eastern Cutlery/Daniels Knives

There will be a drawing for a knife.  Here is the question,

Got an update from Blade Magazine today and got quite a surprise.  I did not know there was a  Bob Loveless movie  in the works.  Check this out