Well I just want to say that I am going on my honeymoon tomorrow morning August 1st 2013. We are heading to Arizona to wander the desert, we will be staying with my Brother Dave Taylor...well in the place he has provided for us....not the garage that is for sure....lol. Maybe set up tipi on the front lawn.....lol.

So I am going to be gone for awhile but check in when I can...

I just wanted to say thanks to all you wonderful people here on IKC...I am truly blessed getting to…

Hi all. Never here enough but I bought some new small double-blade switchblades to share.

The silver handled knife is marked on the small blade

Reverse on the large blade is:

The gold (10k?) is marked on both sides of each blade.

I posted pics of this in the past but I have some new (cool) info to add.

I bought this nice small toolkit a few years back.  Expensive but I really liked it. Problem was I didn't really know anything about it.

Knife is permanently attached and the six diferent tols affix to the opposite end from the blade.

Twist, click and you're in with the drill, file whatever.

But it really isn't substantial enough to use as a kit of tools.…

History of Robeson Cutlery by Charlie Noyes (printed with his permission)

In Memoriam Stainless Steel and Symbols

The European countries have different ways of marking their knives that are Stainless Steel. I could be wrong but the marking "Rostfrei" means stainless. Another term that's used is "INOX" ,this means that the steel doesn't Ironize. I am sure the meaning is "it is stainless".

The reason I started this post, is to talk over the different tang stamps that have some sort of meaning about the knifes construction. Some may be a symbol, others words that may be foreign to us. I'm sure…

I haven't tried the Blog ability yet so I thought I would regurgitate what I learned from KnifeRights.org and the Usual Supsects Network, and what I ultimatley posted on my social media accounts.  I am just so excited the change in Texas Law that I have to shout it out to the mountain tops.  WOOOOT!!!!!

This system may not work for everyone, but it will work for me until a better idea comes along. It's inspired of course by the Great Eastern Cutlery packaging system.

(1)  Six inch by one and one half inch cardboard mailing tube with end caps.

It sounds like it might be some sort of firearm, but actually it's a new small Buschcrafter / EDC made by Frank Hunter at Black Wolf Armory in Lewistown, Montana.

It measures 7 inches overall, and the blade length is 3 3/8 inches. The blade is made from 1/8 inch thick Admiral Steel 1095 that has been oil quenched and tempered to 59-61 Rockwell. It has mitered mild steel bolsters, and black linen Micarta handles. Included is a black leather, vertical carry, sheath.

Allright. So far we've decided on a design, and a grind.

Here's what we have so far: 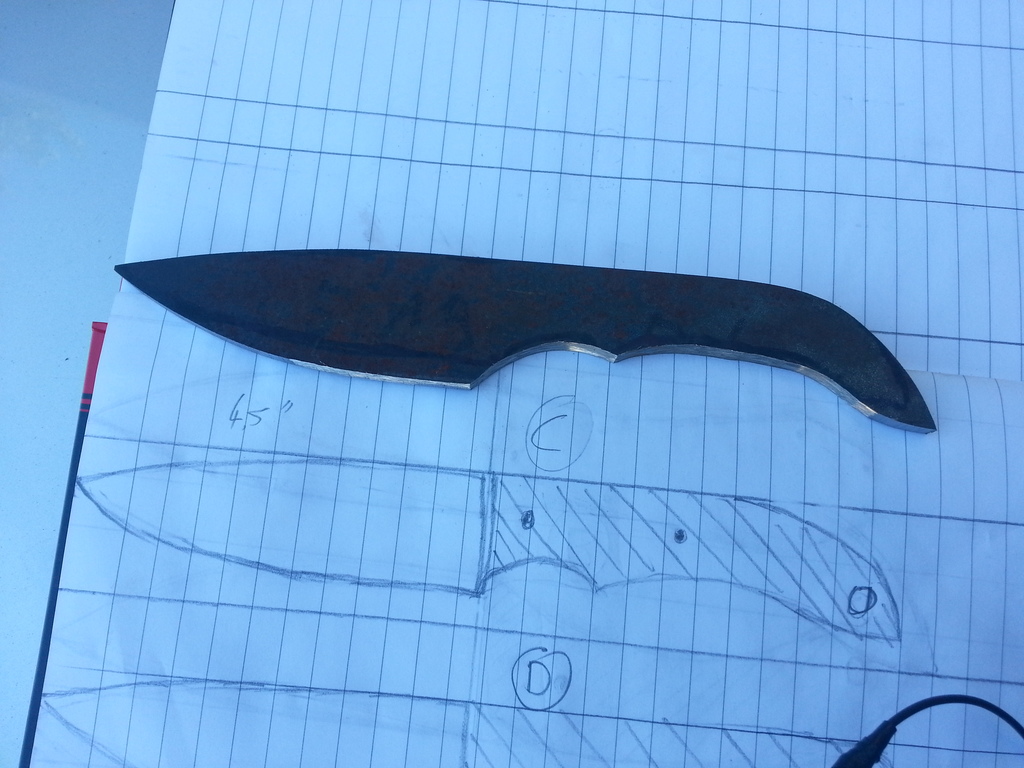 I'll soon be setting a flat grind on that knife. What I need your input on now though is what kind of handle material it should have.

Basically almost anything is an option. But just to get the ball rolling I'll show some…

I got my first Rough Riders this trip to SMKW. 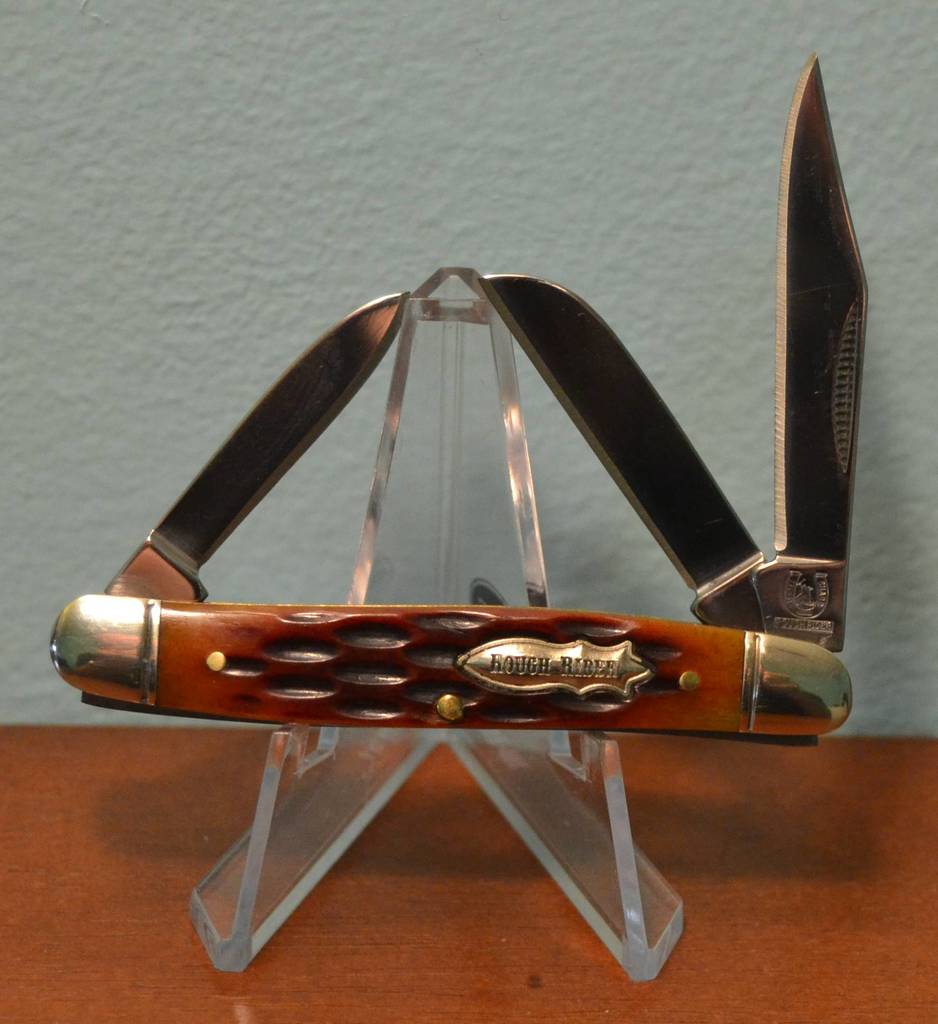 This is a Case…

I did buy knives at SMKW.

This one is a Rough Rider Mushroom knife RR1400.  (The nation is now safe.  If that mushroom that came up in my yard was just a scout for a full scale invasion, I now have the means to beat it back!)

I am going to save this wooden Case knife kit until my grandson, Danny, is old enough to help me put it together.  May…

My visit to SMKW wouldn't have been complete without meeting the Knives Live guys.

Here is Josh and me in the Knives Live studio.  (It's a little bigger than a two holer.  I believe you could fit a three holer in it!) 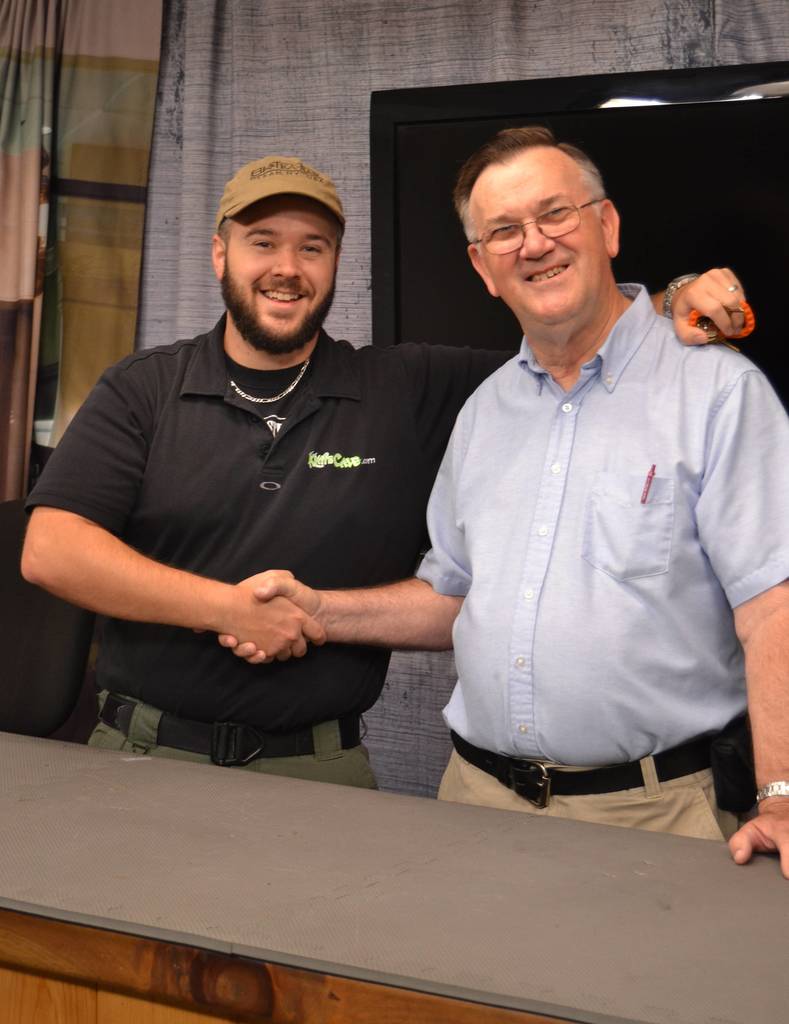 Here are more pictures of exhibits and displays on the showroom floor.… 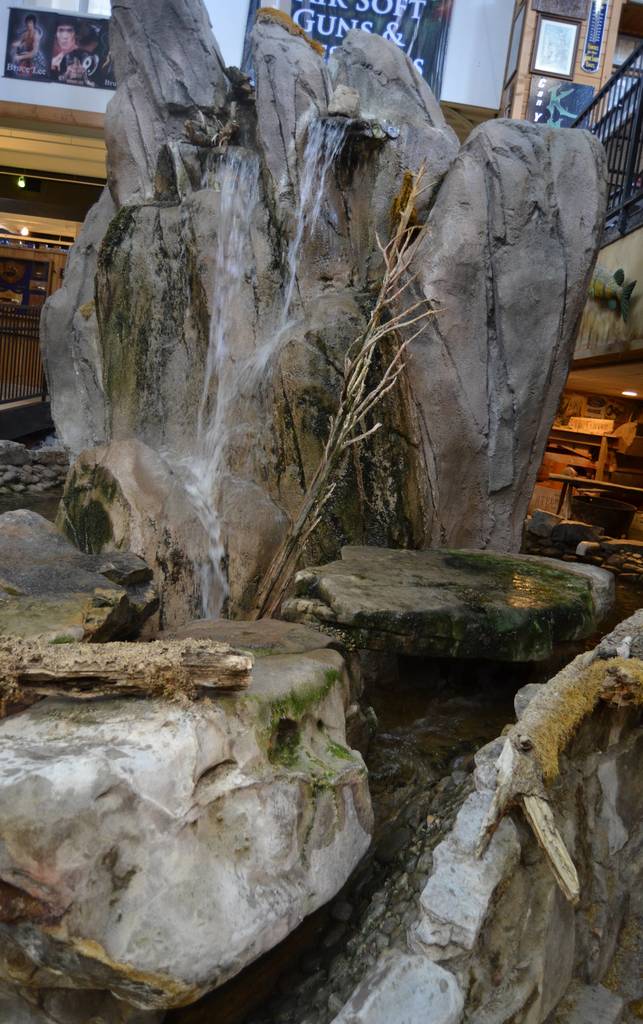 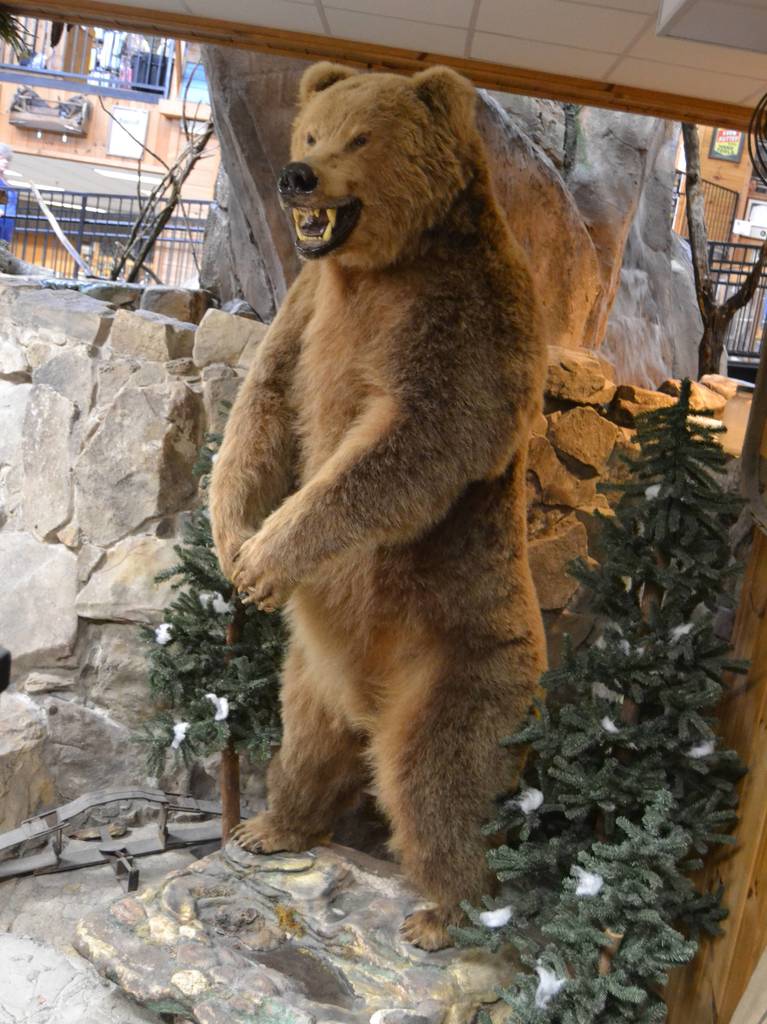 The museum has a large Case collection.  Here are just a few examples.  Notice the missing knife in the lower left hand corner of the first picture.  It was celluloid and had started to break down and had to be removed to prevent damage to the other knives in the exhibit.… 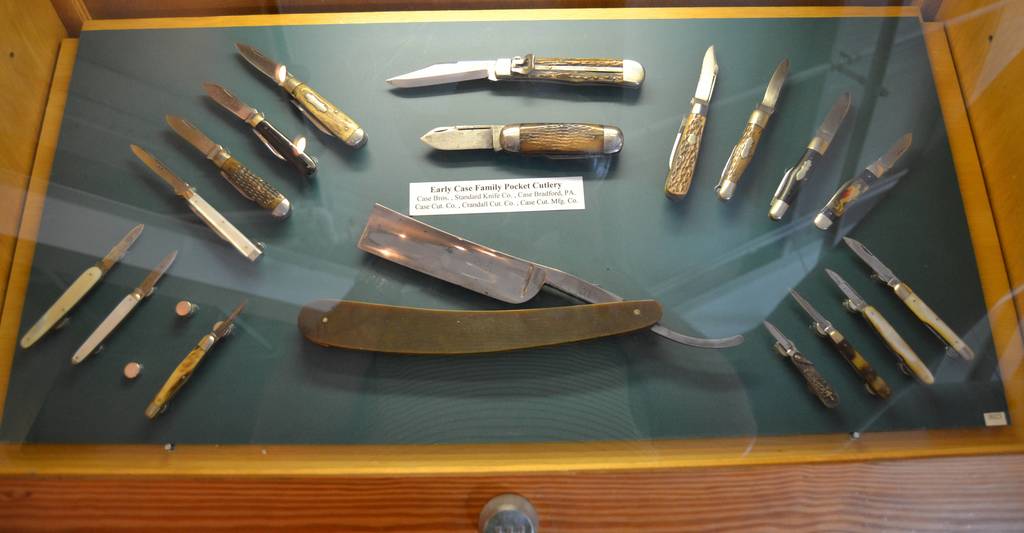 In the National Knife Museum, there are many exhibits starting with the stone age... 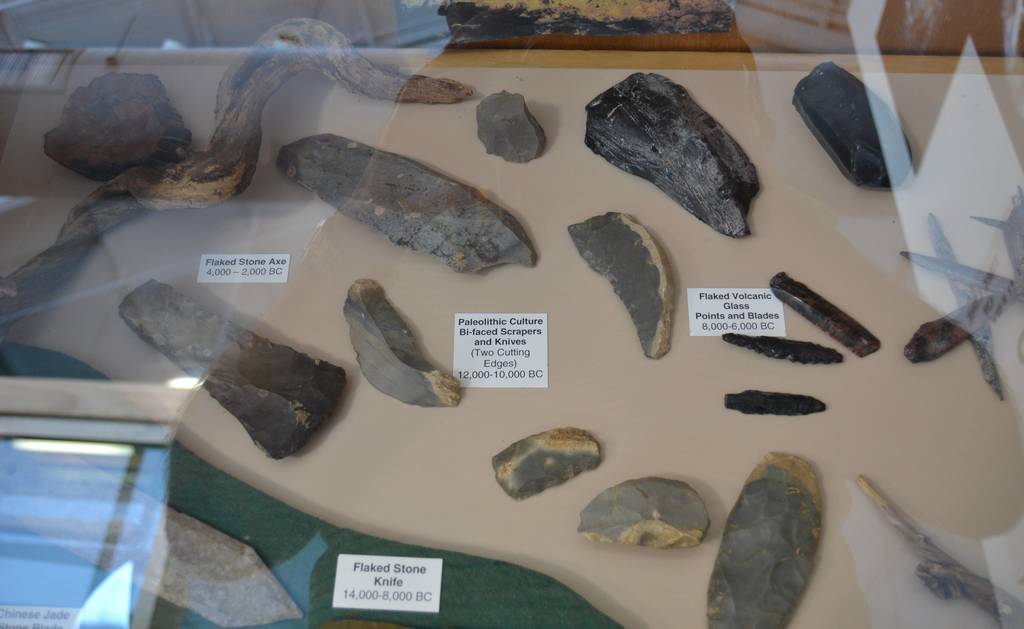 Continuing through the bronze age... 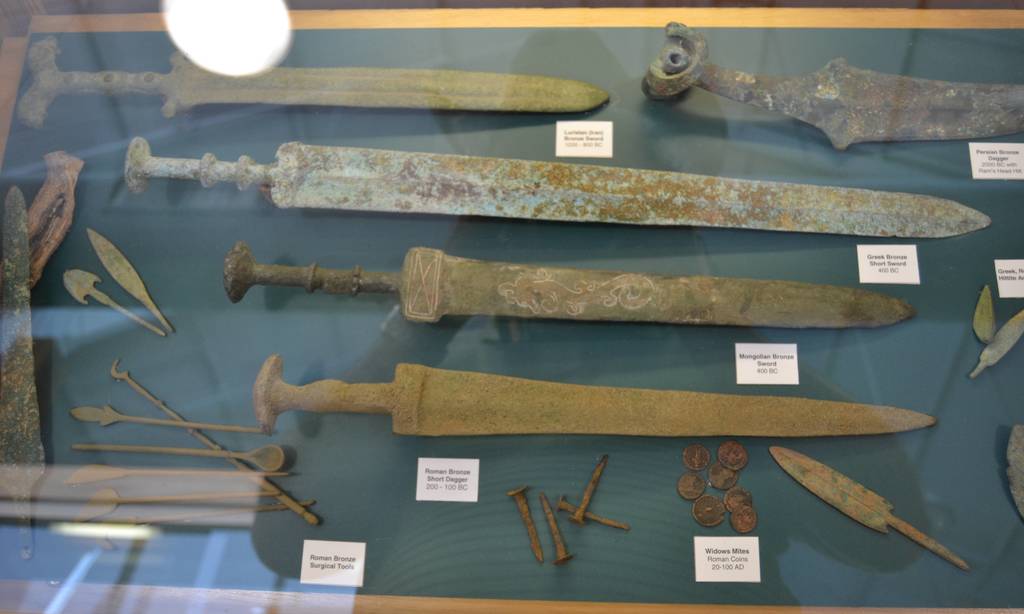 Up to and including modern cutlery...…

My family and I rented a cabin in Pigeon Forge, Tennessee for the week of July 14, 2013.  Now Pigeon Forge is next to Sevierville which is the home of Smoky Mountain Knife Works.  If I were a Jewish knife collector, SMKW would be my Jerusalem of the knife world.  If I were a Muslim knife collector it would be the Mecca of the knife world.  However since I am only a Baptist, maybe I can consider it a missionary trip?

Anyway here is a view as we are approaching Sevierville of…

CVA (Connecticut Valley Arms) was a pioneer company that brought back the black powder shooting sport in the early 1970s. CVA was originally located in Haddam, CT, along the Conn. R., hence their name. They started with reproductions of traditional American muzzle loaders like the Kentucky Long Rifle and offered them in finished and kit forms. All the firearms were made in Spain and packaged in CT. I don’t know if the finished guns were assembled in Spain or CT.…

I put my Becker BK-2 to work this weekend. Here is a pile of little ones I made from one big one. 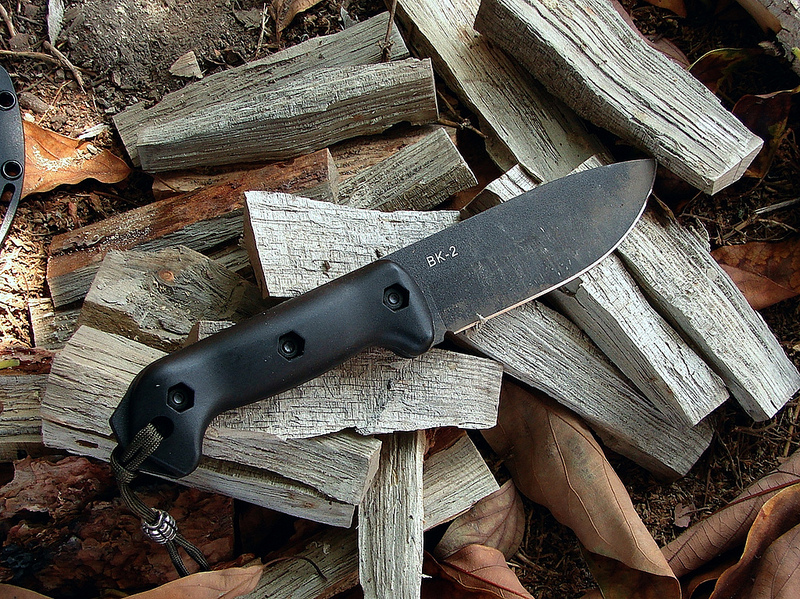