I truly appreciate all who welcomed me to your outstanding group.  I am grateful for your acceptance of my application for membership and will strive to live up to the high standards of the family.

Based on the success of the S&W model 6010 Bowie knife, S&W offered the Collector Series of…

I needed some decent kitchen knives as cooking is my favorite pass time. So I purchased a set of chef knives from Amazon and got to it.

Katsura AUS10 damascus blanks; 8" chef, 6.5" chinese cleaver, 7" Santoku and a 7" Nakiri. They all came without the Logo, matching Mosaic pins and gift boxes. Cost about $291/set.

As they'll been in my Girlfriends kitchen, I let her select the handle material. She liked the Purpleheart wood and Red liners. It's easy to work as far as I…

Some of the Mammoth or Mastodon scales on some friction folders I made all about 6 inches long. If any of you makers need a good source (not me) get in touch I found a good one. 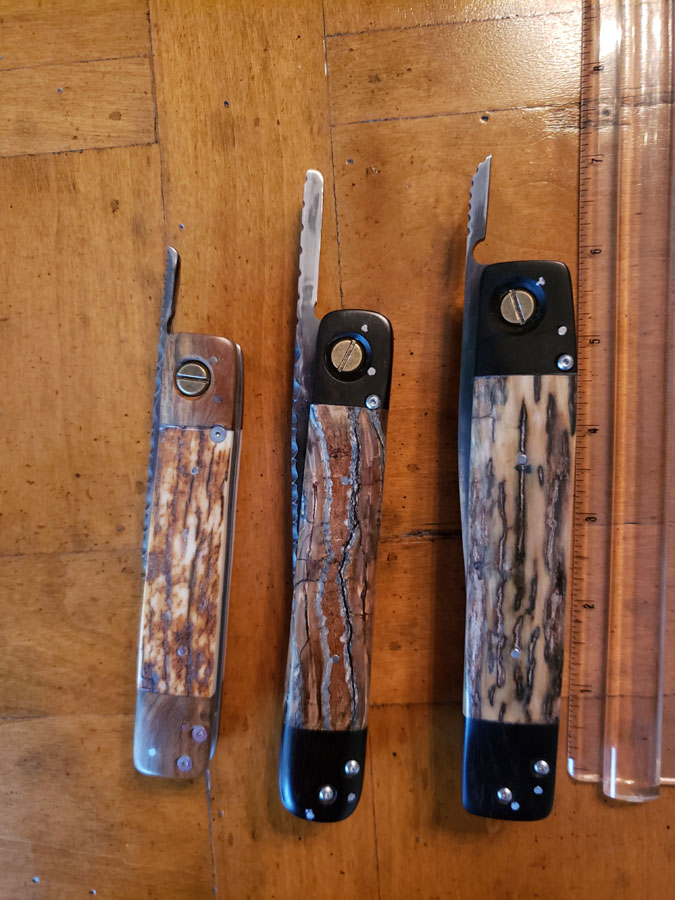 KnifeMaker Stag anyone show me some of what you have.

What I collect not what I make. I have worked in Stag as well as Mammoth Bark {Ivory). Don't be afraid of using this material it works well as long as you work with the grain. Mammoth is defiantly easier to work with than Stag. You need to get the "fresh" stuff that has been stabilized. I you wind up with fossilized bark that is a whole different type of machinery....think Lapidary.

So here is what I collect. Though truth be told I probably could make them. The SB's are really not all…

Every year we have an excuse to buy a new knife -- National Knife Day, every August 24!

Yeah, I know it's a holiday made up by a marketing department to sell knives, & none of us really need an excuse to buy another knife.

That aside, what are your plans for celebrating...?  :)

KnifeMaker How about a blog on Heat Treating Recipes? As well as the Rockwell hardness you get for the same.

Here are some of the steels I use. Always looking for new Heat Treat recipes. Been at this a while if you need on let me know. the picture is a sample of what I do. The balance can be seen on FB at Mongrel Knives. Hope I am not violating any rules here still trying to navigate the site. Ken

Very occasionally a non stainless. I do Gun shows to sell my knives and just go tired of…

Son just gave me this Case

went off.  It seems the man had a yellow handled Case 3254 carbon steel trapper.  He informed the man that he couldn't take the knife in with him and did he want to return to his vehicle and put the knife up.  The man told him no you can have it or just throw it in the trash.  So naturally my son brought it home to me.  It had been so long since it had be oiled that the…

Finally a new, (to me), knife to report, a genuine Camillus TL-29 found at one of my honey hole local thrift stores. Hardwood handle, stamped with the model number and in pretty good condition, (shown as found, uncleaned). Glad to be collecting again, at least for the time being.…

I have been cleaning a knife that once I was able to open it and get the blade cleaned, I found a tang stamp that says, ‘John Primble, India, Steel Works’. It has metal scales with ‘I KUT’ on one side. I have not been able to find any info on this knife. I would appreciate any info any of you might have. Thanks… 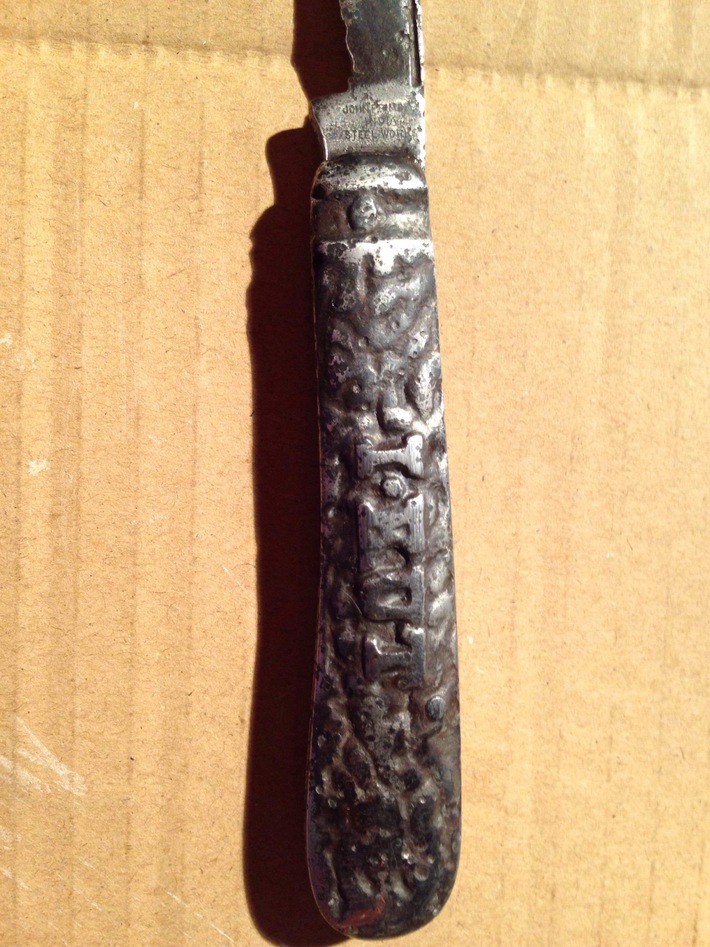 Making the move to Arkansas

I've been giving this a lot of thought and after spending a couple of weeks there. I figured it was time to make the move. So as of 6-1-19 I will be an Arkansas resident, My Sister and her Husband have lived there for 30+ years.

She's been asking me to come stay for a week or so and I finally did.

I moved to a small town called Glenwood, its about 35 miles east of Hot Springs. A 6 hour drive I did not enjoy as it was hot and I got really tired towards the end of… 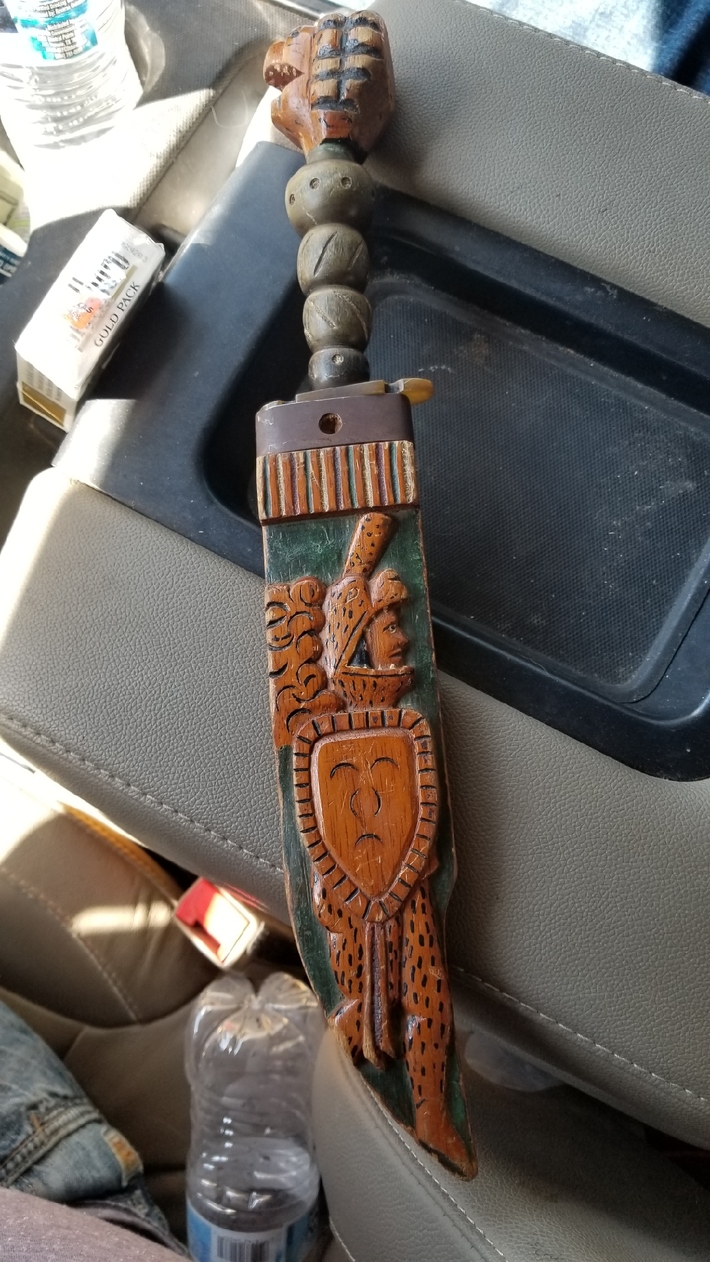 Any ideas of origin. I was thinking Aztec or Mayan.Added by …

large collection for sale or will part. Please message me if interested I have to many to list. May just have the fightin rooster knfe you have been looking for to add to your collection. Many pearl, Proro types and low number knives in mint condition.

Knife show on a budget Kaylin and I, along with my grandson, Nik, and son-in-law, Matt, made the 5 hour drive up to the Dalton show, this past weekend.

While the biggest topic of conversation was Jan's not being able to come, we still had a great time.  As always, I enjoy seeking out other iKC members and sponsors; special shout out to Ken and Roger, of Blue…

Found a A.J. Jordan - Sheffield England pocket knife at an estate sale for next to nothing and wondered about the maker. Main blade is broken (hence the next to nothing price) will likely try to restore if I can find a replacement blade. 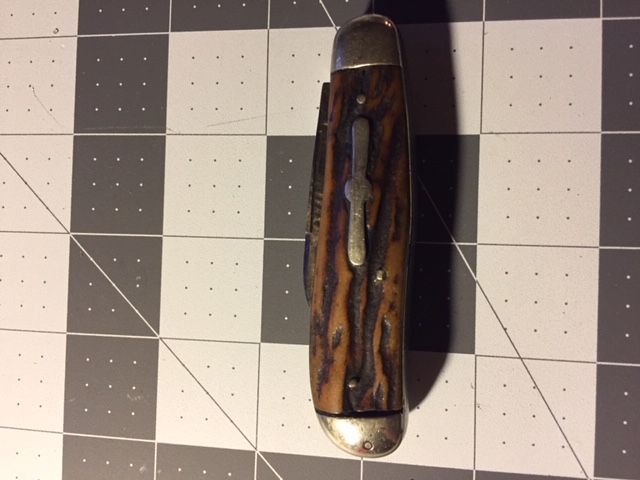 Just found this Camillus 5" Boy Scouts Of America Folding Hunter, jigged bone handles, single bolster, BSA shield & inscription, and oh, did I mention the oh-so-cool secondary serrated blade? This has separate locks for each blade, something I have never seen before. I've been watching this knife at a local thrift store for months, hoping no one would buy it out from under me, fortunately it was priced so high no one snagged it, so I took a chance and waited for a sale. Well, today they…

As you may already know, I am a fan of Boker knives. I am not so much a fan of “Top 5” or “Top 10” lists, but so many people are doing it, there must be something to it! I have limited this list to post-WW2 knives, because the pre-war knives are so difficult to find nowadays. All the knives in this list are still being produced by the Heinrich Boker Baumwerk in Solingen, Germany. So if…

Over half a century ago the United States Air Force was America's primary nuclear deterrent. This was accomplished by its long range bomber aircraft operated by the Strategic Air Command, the B-36, the B-47 and later on the B-52. ICBMs came along even later. To maintain razor sharp proficiency in the nuclear mission long range training missions were an daily occurrence and took airmen over every corner of the world. The Air Force became interested in refining its survival kits and…

Well, I've not been that active in collecting knives the past year, but having had two major surgeries and concentrating on trying to pay off the knives I had purchased previous to a year ago has kept me otherwise occupied; until today. Having been pretty much confined to home most of the year got the best of me today, I was feeling good, and was done with the major event I put on in Big Sur annually so I decided I needed to get out of the house and me being me I chose to go on a thrift…