A Good Idea for a Bad Blog

When I joined as one of the first handful of members I though we'd be lucky to have a group that collects little pocket knives. Sure enough, we do. But Scott King, (our founder) to his credit and I'm sure the occasional pain, has allowed us to form groups about Axes, about knife-related fiction in the Story Board, about Fixed Blades and so much more. He's a modest guy, but I'll tell you for sure he knows more about those fat little Elephant Toenail… Continue

Hi just wondering i know this dosent have to do with knife's but : wondering what kind of lighters did u guys carry all the time and if u have a special lighter in you Bug out bag ( just incase the **** hits the fan ) if u can show me a picture would like that , im looking to buy a new zippo and i like the zippo with the z=plus inserts for you classic zippo ( makes it a blue toarch) thx again for your time. 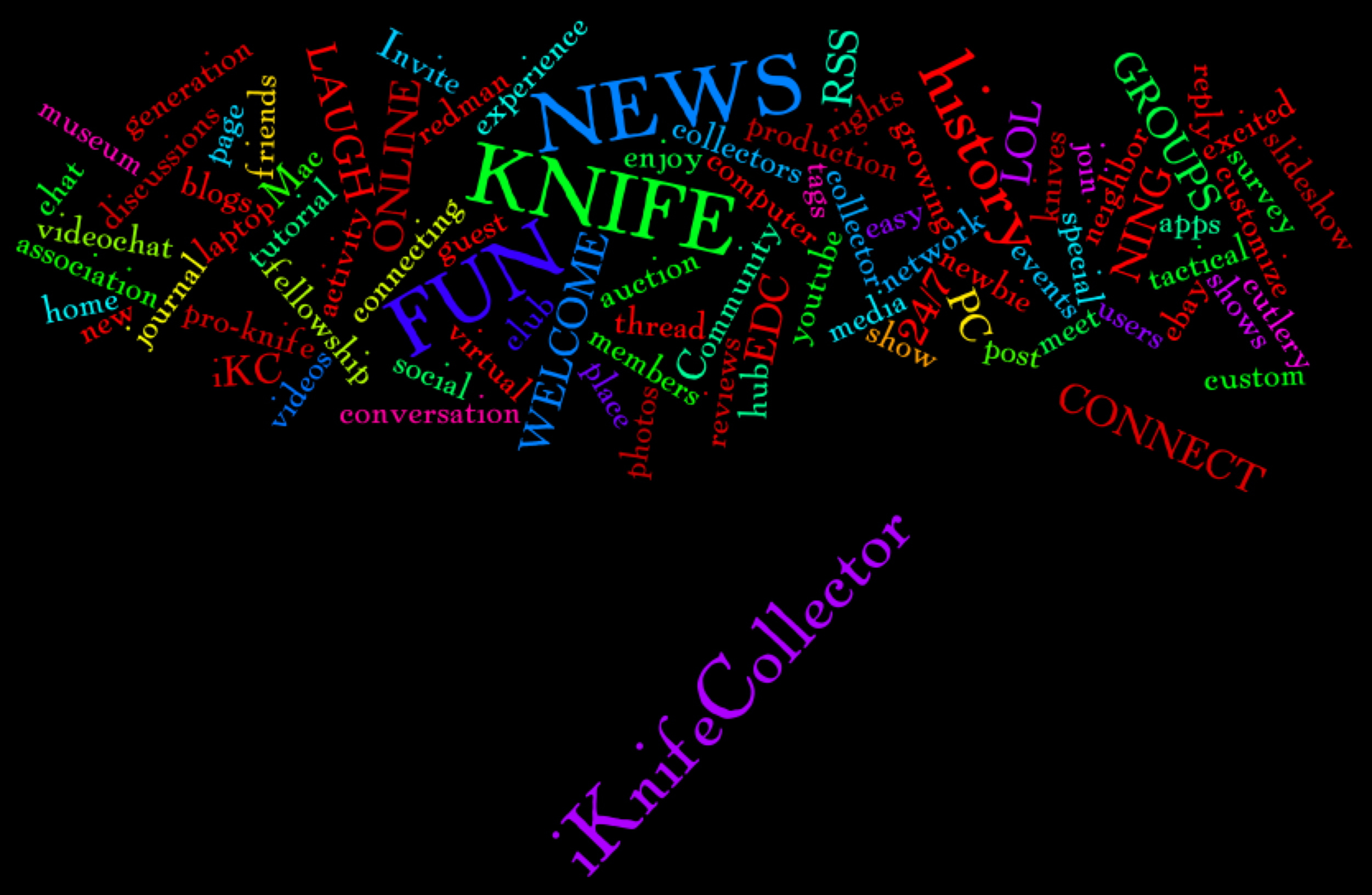 In Memoriam Knives 2010, The World's Greatest Knife Book- A must have for all knife enthusiasts 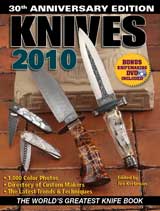 While its billing as The World's Greatest Knife Book may be a little over the top, Knives 2010 is a must have for all knife lovers.

It's Krause Publications' 30th Anniversary Edition and it is chocked full of over 1000 high quality knife photos of all makes and models. (Granted 1000 pictures pales in comparison to iKC's over 5000 pictures, it is still a wonderful view of custom made knives by today's top makers.)

If you like to look at cool knives-… Continue

In Memoriam A Case of Case Trivia

You probably know that my favorite knife pattern probably has more documented names (nicknames) than any other pattern I am able to identify. 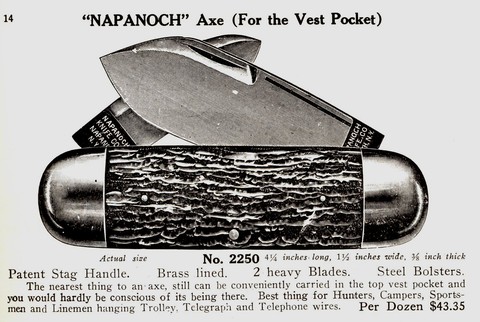 HAVE YOU EVER WONDERED?

I just got my latest William Edward damascus steel survival knife from Rockblade and what a beauty. This knife is a mix of fantasy and utility. Here are the specs on the knife.
Ram's Horn Handle with Brass Pins & Damascus Steel Pommel
DAMASCUS STEEL 340 LAYERS FULL TANG BLADE
HANDCRAFTED BEST BRIDLE LEATHER SHEATH COVER
This is another one of those knives that the pictures don't do justice to. Seriously, if you ever decide to buy a damascus blade… Continue 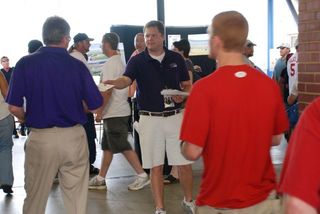 Jeff Saylor's self-initiative of passing our iKC invitation flyers at a recent show provides us all an excellent example of how real our virtual community actually is!

There are tens of thousands of knife enthusiasts who may be interested in connecting in a very real way here at iKC. So, I ask you print a few dozen of the new iKC Handout and take them with you wherever you go- knife shows, club meetings, knife factory open houses, hardware & knife stores...in… Continue

In Memoriam Finally It Tasted My Blood

An axiom in the knife world you've probably heard is- "A knife only becomes yours when it decides to taste your blood."

Sure we all own knives we think are ours but from the knife's point of view- it only agrees to be yours at the time it decides to taste your blood.

Well I am proud to say my new EDC agreed to be mine yesterday.

Redemption from a so-called Shank- Life: A Melancholy Essay

“It cuts like a knife but it feels so right.”
-Bryan Adams

After graduating from college I spent three months thinking where field should I enter. A highly competitive industry of TV commercial production house which I think I will enjoy a lot or other field that there’s money and at the same time you could easily get into; like… Continue

Hey everyone, hope all is well. My birthday is just around the corner and I have been itching to buy a new knife. Only this time around I am interested in buying a semi-custom folder. Right now I cannot make my mind up on which knife I would want to buy, a Strider SMF or a CRK Sebenza. Both knives have an outstanding track record an will cost me a lot of money (Almost $500, depending on which one I decide to get). I asked my best friend Eric who is the co-owner of my local knife shop,… Continue

Why I carry knives...because of the Monsters out there!

Today I'll talk a bit about The Medusa Dagger, one of the biggest, scariest knives I have ever seen. It has a 17 1/2" overall length. 10" serpentine kriss style 420 J2 stainless double edge fantasy blade with mirror finish. Antique silver plated cast metal handle of Medusa, most famous of the Greek monsters known as Gorgons. This knife was the First Annual fantasy knife by Kit Rae. This piece is also a must have for any serious Kit Rae collector. It is also part of Kit… Continue

Glad to be here

Just wanted to thank whoever is responsible for this new site. There arent many choices for knife collectors as far as a community. Look forward to it.

a week or so ago I received the latest addition to the Kit Rae Swords of the Ancients story. It's called the Black Legion War Axe and it is one beautiful piece of art. The primary weapon of the Black Legion, monstrous foot soldiers of the Dark One (check out the artwork). This item features a 420J2 stainless polished 19 1/2" blade and back spike, engraved runes, solid metal and wood handle parts, and a genuine leather wrapped grip. It includes a certificate of… Continue

The system hosting iKC is continually working to make our community better. For several months, enhancements have been in the works. Overnight they were rolled out.

One of these new features is another communication tool for our members. It's called STATUS. Many of you have it on your My Page now. I do and I like it! For you who don't, I'm checking if you add it from your settings area.

Basically STATUS- let's you post a note on your My Page about activities,… Continue

hope everybody had a great long week-end. Today I am going to show you another of the 4th annual Blades of Chaos Edition called Navros Dagger. The special Autographed Gold Edition comes with a cold cast statue of Vaelen sculpted and hand painted under the supervision of Kit Rae. The Knife has an overall length of 20 and 1/2 inches and is made of cast metal and has a silver antiqued finish. the blade is 13 and 3/4 long. The handle is made of 24K gold plated solid metal… Continue

In Memoriam All About Toenails: A Case XX USN Redbone

The Elephant Toenail pattern's been around for over a hundred years and is favored by both production and custom knife collectors. They come in hundreds of flavors, which is good cause we pattern collectors love variety!

Saw one the other day I had to show you. It's the standard style toenail. And is a Case XX Redbone. The redbone is very popular- only the rare XX Greenbone toenail is more sought after, as far as the XX's go anyway.

We'll save the redbone talk for another… Continue

hi everyone, I thought I'd do something a little different today, instead of a sword, let's take a look at a Kit Rae knife.
It's the 3rd annual knife called Archeros. It's one of Kit Rae's fantasy knives called The Blades of Chaos. The Limited Edition( the one I have) comes with a cold cast statue and is numbered. I have number 1298/1500. As part of the story, the statue depicts the elf Anvari holding Archeros high in triumph. This is just a beautiful piece. The knife has an Overall Length… Continue

The Elephant Toenail Collectors Club decided by unanimous consent to officially move in to iKC- lock, stock and barrel.
Yes, that's right. We like these new digs better. iKC offers us everything we need, plus some. For close to 2 years we called home ElephantToenails.com and in particular its blog- The… Continue

In Memoriam How to use iKnifeCollector to write a blog post

As promised here's Part II to Blogging to the Knife Community and specifically how to use iKnifeCollector. Part I of this series outlined the opportunity for bloggers and writers to establish their presence and reputation in the community on their favorite knife related subjects.

If you are still learning your way around our community and how it works, take a few minutes to get a feel… Continue

Jan Carter left a comment for Ms Data
22 hours ago

Brian Malott is now a member of iKnife Collector
yesterday
Welcome Them!